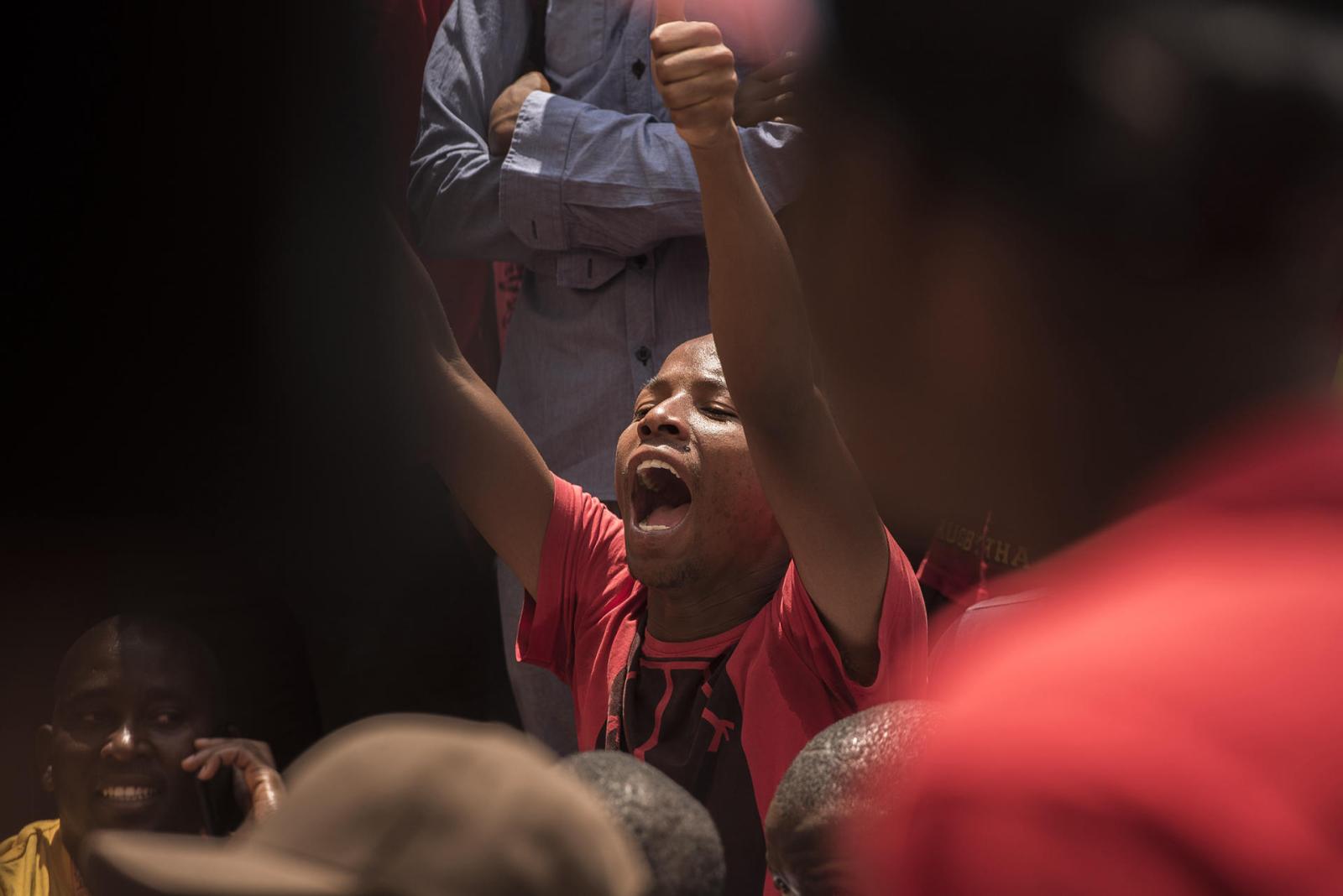 Archive Photo: A student from Tshwane University of Technology demonstrates during another day of demonstrations against fee increases at their university, in Pretoria, South Africa, 21 October 2015. The students have demonstrated against a proposed fee increase and has spread to other major universities in the country. EPA/SHIRAAZ MOHAMED

Allegations of destruction of property and intimidation at Tshwane University of Technology (TUT) have sparked warnings of violent electioneering on university and college campuses.

Two months before South Africans head to the polls, political parties at the Tshwane University of Technology have come under fire for allegations of violent electioneering. This comes on the back of campus protests at TUT and other universities over allowances and student accommodation provided by the National Student Financial Aid Scheme (NSFAS) since the start of the academic year.

In the most recent event, members of the Democratic Alliance Student Organisation (DASO) at TUT have claimed that students from the ANC Youth League (ANCYL) vandalised their campus residence rooms and intimidated DASO members into destroying their own property. Videos now circulating on social media show two DASO members burning DA-branded T-shirts while a crowd chants, as well as the aftermath of heavily vandalised bedrooms.

DASO TUT leader and SRC Secretary General for TUT Pretoria campus, Gilbert Monnanyana told Daily Maverick that some of his belongings were also stolen and destroyed.

“They took all of the DASO T-shirts that were in my bedroom, all the material, and they took some of my members captive and they forced one of our members to burn their own regalia and made our members take off their T-shirts and burn them in front of students.”

DASO members claim the students who vandalised and stole their property are known ANCYL members, and “they were wearing ANC T-shirts”.

However, ANCYL Gauteng Chair Matome Chiloane has emphatically denied this allegation, claiming the Youth League had no involvement in the event.

“It can’t be them. If you had said EFF forced them to burn T-shirts of the DA, I would believe it myself. But not the ANC, I think you know that. Especially not the ANC Youth League, we are not that type of rascals.”

Although the EFF student command (EFFSC) led the recent movement to shut down TUT, the DASO members involved in the incident allege that they were harassed by students from the ANCYL, not the EFFSC.

This incident comes amid student protests on campuses around the country, which have resulted in multiple students being arrested, staff and students injured and one student killed. At least seven major South African universities have been forced to close since the start of the academic year while administrative staff negotiate with student protesters. During the most recent round of protests over student housing and allowances, many universities closed down residences as well as campuses, forcing protesting students to find alternative living arrangements.

Tshwane University of Technology, in particular, has experienced unresolved protests since the start of February. A 6 March announcement from the university stated that the campus will remain closed until further notice, following “ongoing and often violent student protest action at TUT campuses”.

Similar student protests occurred at TUT and other institutions in the lead up to the 2014 national elections, as students rallied together to protest issues of NSFAS funding. However, in past protests, students have primarily been unified behind a common goal. Provincial Chairperson of the Gauteng DA Youth Wing Pogiso Mthimunye says the recent intimidation of DASO students occurred despite members of all political parties on campus generally protesting together.

According to political analyst Ralph Mathekga, the situation on campuses has changed, as students have become more agitated and intolerant of each other.

“In recent years we have seen deliberate politicisation of the student structures on university campuses,” Mathekga told Daily Maverick.

Despite student protests frequently taking centre stage during political discourse concerning them, young South Africans are not hugely politically active. Students, as Mathekga said, make up a small portion of today’s youth, and do not present a full representation of youth in South Africa.

In fact, according to the IEC, approximately 700,000 new voters registered to vote in the upcoming elections. In comparison, over 700,000 children were born in 1996, the majority of whom were too young to vote in the last round of national elections.

While they may have the ability to vote — or had the ability to, as voter registration has now closed — it would appear that many young South Africans have not registered to put their support behind the political parties that campaign on university campuses.

However, both Mthimunye and Chiloane said, respectively, that the DA and the ANC, will continue to promote their parties on university and college campuses through the DA Student Organisation and ANC Youth League.

Mthimunye told Daily Maverick that the Gauteng DA leadership also intends to file a complaint with the Independent Electoral Commission (IEC) of violence and intimidation against members of the ANCYL regarding the incident at TUT. DM