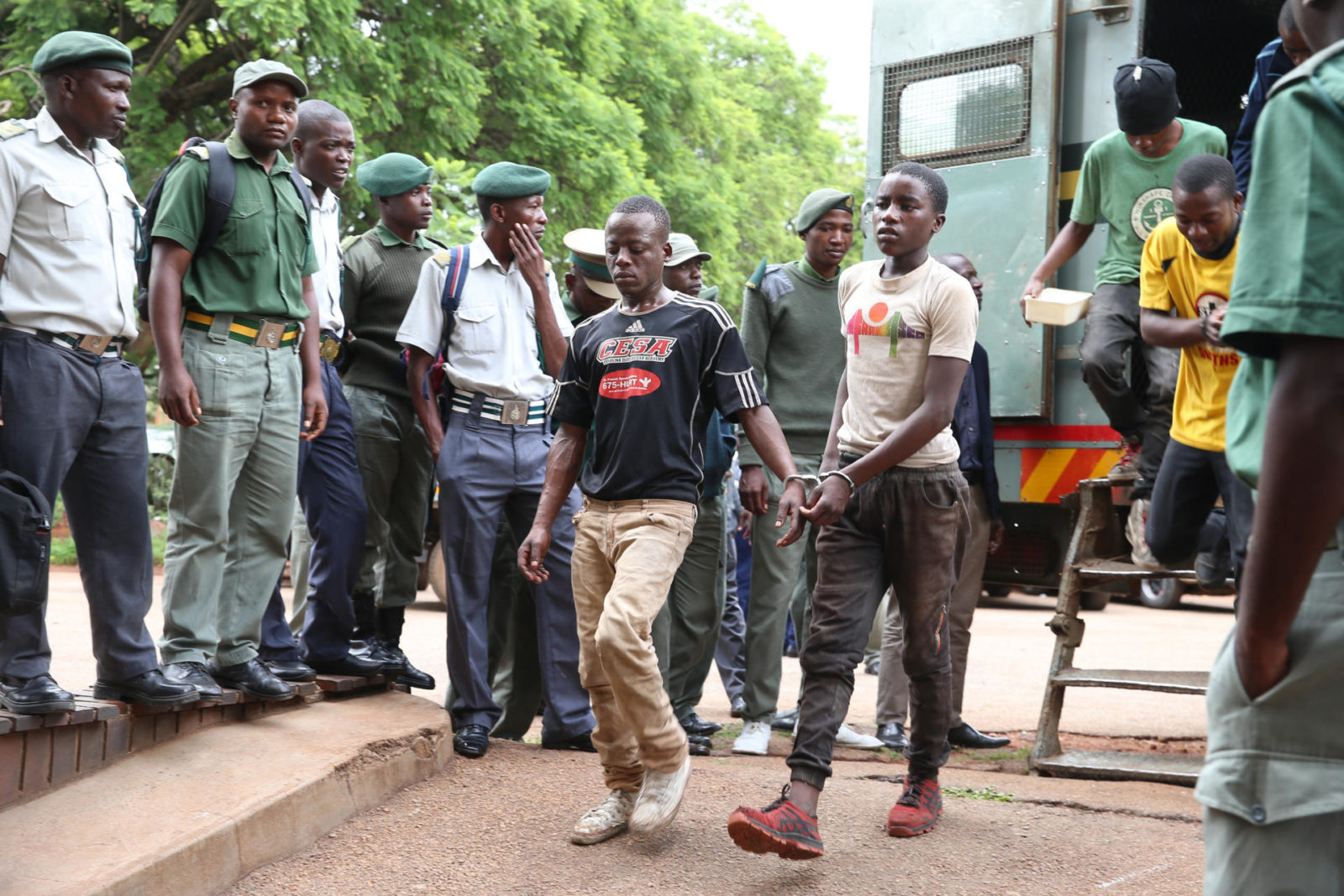 Some of the more than 400 protesters who were arrested over the recent fuel price increase, arrive at the Harare Magistrates Courts in handcuffs and leg irons in Harare, Zimbabwe, 17 January 2019. Several people have been killed during the fuel protests that began on 14 January 2019 following a 130 per cent increase in the price of fuel by the government of Emmerson Mnangagwa. EPA-EFE/AARON UFUMELI

Mnangagwa has systematically curbed the independence of the judiciary, magistracy, prosecution and the country’s various commissions. By Derek Matyszak

The assessment of Zimbabwe’s “Second Republic” under President Emmerson Mnangagwa has been overshadowed by the violence of 1 August 2018 and mid-January 2019. On both occasions, Zimbabwe’s military intervened to suppress violent protests, using live ammunition and gunning down six fleeing civilians during the first demonstrations and a reported 17 in the second.

The brutal response of the military, under Mnangagwa’s ultimate command, has obscured other alarming marks of his authoritarian style of governance. This doesn’t come as a surprise. In his last few months in Robert Mugabe’s government, Mnangagwa was the driving force behind two anti-democratic changes to Zimbabwean law.

One was an amendment to the constitution that sharply curtailed the independence of the judiciary. It reduced the involvement of the Judicial Service Commission in the appointments of the chief justice and judge president of the high court to one of consultation only, essentially placing the power solely in the hands of the president.

Both changes to the law are in accordance with the general modus operandi of Zimbabwe African National Union-Patriotic Front-run (Zanu-PF) administrations, where government thinks only in terms of institutions that are part of or controlled by government. It is extremely uncomfortable with any institution that claims independence.

The Mnangagwa administration has shown itself to be as bad, if not worse, than that of Mugabe in this regard. The functioning of the ‘independent’ commissions, established under Zimbabwe’s 2013 constitution, is a clear example.

Members of Mnangagwa’s cabinet are responsible for “administering” the “enabling act” of each commission. In this way commissions’ finances, and thus operations, are controlled. The chairperson of the National Peace and Reconciliation Commission recently made a frank admission that “you find independence cannot be total per se” and that he is “answerable” to Vice-President Kembo Mohadi.

Government also exercises undue control over the secretariat of the commissions. The Zimbabwe Electoral Commission (ZEC) is run by a secretariat comprising many ZANU-PF loyalists, many of whom have military backgrounds. As the 2018 polls made abundantly clear, the commissioners function largely as the public relations department, doing damage control for displays of partisanship in managing polls.

The commission heads are appointed by the president. Justice Rita Makarau, whose family was known to be close to that of Mugabe – and who as ZEC chairperson thought it appropriate to sink to her knees when addressing Mugabe “as a sign of respect” – headed the commission until Mugabe’s ousting. That she then apparently found her position untenable and resigned, speaks volumes about the position’s lack of independence.

The Zimbabwe Anti-Corruption Commission has not fared much better. Mnangagwa found it expedient to move the administration of the enabling act from the minister of home affairs to the Office of the President and Cabinet.

If the commission were operating independently, it should have been irrelevant who administered the act. When this move didn’t have the desired effect, Mnangagwa publicly accused all the commissioners of being corrupt. Under the constitution, commissioners can only be removed by a tribunal established for the purpose. This proved entirely unnecessary. The commissioners all obediently and immediately resigned.

The conduct of Zimbabwe’s lower courts after the January protests showed the magistracy equally compromised and intimidated. It allowed the judicial process to be used for repression. People were hauled arbitrarily before the courts by the police, routinely denied bail and subjected to fast-tracked mass trials that allowed little time to prepare a defence.

In one of these cases, the prosecutor – when the magistrate asked the obligatory question as to why he was opposing bail – thought it sufficed to say he had been instructed to do so by Zimbabwe’s military commander.

Sixty percent of the National Prosecuting Authority’s staff have been seconded from the military. Reacting to criticism of arbitrary and brutal conduct of the military during the January protests, acting prosecutor-general Kumbirai Hodzi tried to airbrush the issue, stating that no “law-abiding citizen” had been killed.

This was not enough to gain Mnangagwa’s complete trust, however. On swearing in Hodzi to the substantive post, the president warned him against thinking he could operate independently: “I want you to know the difference between the aspirational and what is termed realpolitik. Independence is an aspiration, it’s not a reality… Anyway, let me clarify things for you, my dear.

“But then, do you also know that I am the head of state and that when I operate at that level, all these three pillars are below me? So if you see yourself disregarding that saying you are independent and not come to seek advice from me as the head of state, then there is a problem.”

With the advent of Mnangagwa, some predicted that Zimbabwe would become a developmental authoritarian state – a la Rwanda. So far, they have the authoritarian part right. DM

Jessica Bezuidenhout for Scorpio • 1 hour ago