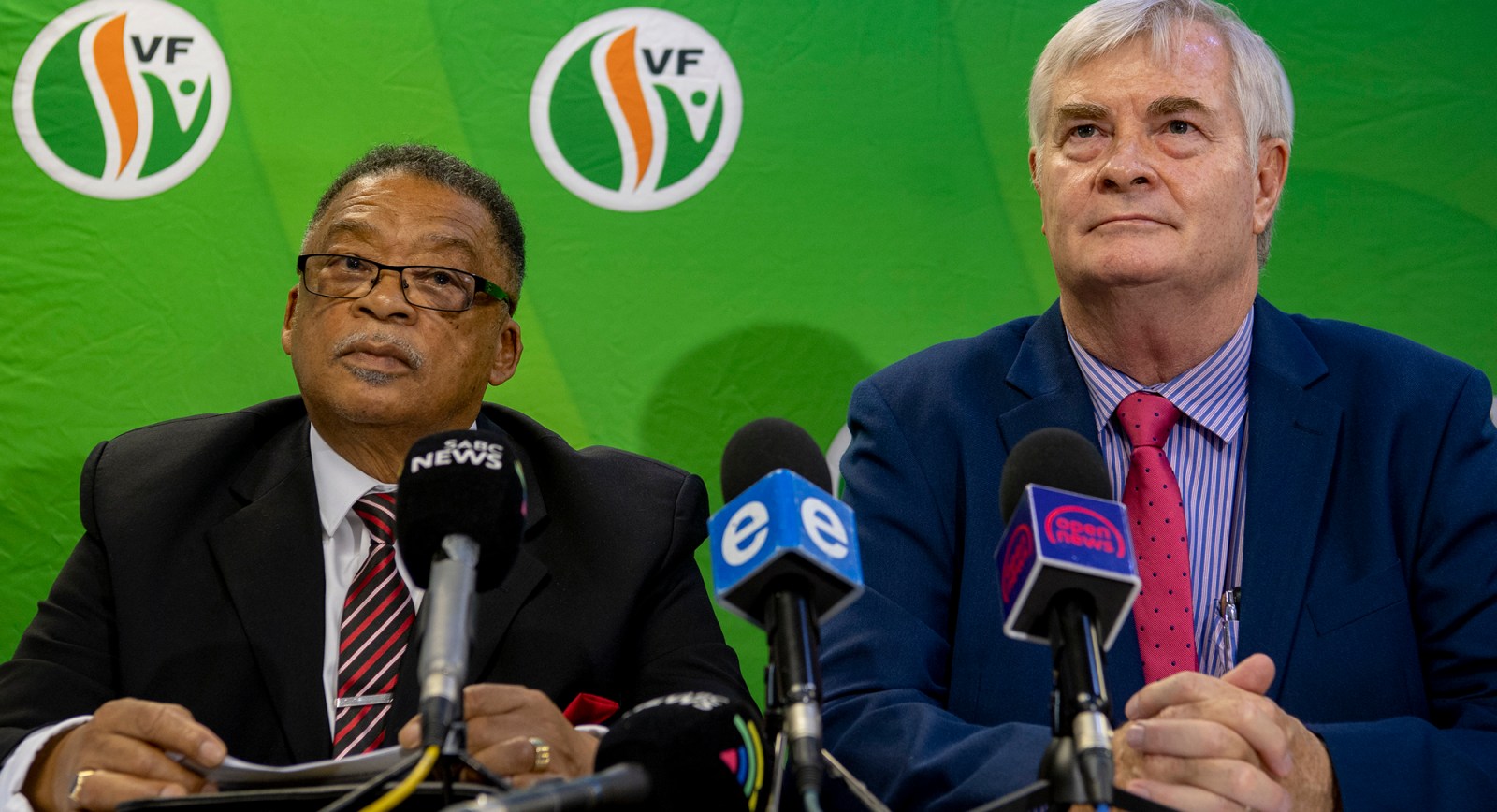 Peter Marais and Pieter Groenewald during the Freedom Front Plus announcement of its candidate for premier in the Western Cape at Parliament on January 22, 2019 in Cape Town, South Africa. Peter Marais, a veteran politician in the Cape politics, was revealed the FF Plus candidate for the premier of the Western Cape ahead of the 2019 elections, despite his controversial past. (Photo by Gallo Images / Netwerk24 / Jaco Marais)

Weeks before South Africa’s first democratic elections, former military commander Constand Viljoen founded the Freedom Front and ensured that whites to the right of centre also had a political home in the new South Africa. Twenty-five years later, the party reckons it’s on the up.

When the Freedom Front Plus launched its manifesto in the Rockwood Theatre in Pretoria on Saturday there were smoke and lights and the green, orange and white balloons. Party leader Pieter Groenewald walked onto the stage, waving the party manifesto, and started his speech abruptly, with little greeting or niceties.

Perhaps the meagre three minutes’ speaking time his party usually gets during parliamentary debates does that to a speaker. But this was his party, and he could speak for as long as he wants to. In this case, it was exactly an hour and the five seconds thereafter it took him to conclude.

He tapped into the feelings of powerlessness of white – and also coloured – voters amid debates of race and redress, and he speaks their language. Literally. Most of his speech was in Afrikaans, with a few English sound bites.

Minorities were being bullied, and they don’t get the recognition they deserve. The ANC should stop blaming other groups (i.e. apartheid and white people) for their failures, he said to more applause. With affirmative action, both brown and white communities were being disadvantaged, he said. Applause.

Even a liberal democracy says minorities have to be protected. That is why we say we stand up and slaan terug!” he said, echoing the party’s election poster slogan which translates into “Hit back”. A week before, DA federal chairperson Athol Trollip derided this slogan at the DA’s manifesto launch, saying he learnt that when you fight, you hit first. If you hit back, it’s too late, he said. The DA is clearly paying attention.

Groenewald condemned affirmative action – which he said was no longer needed as there were now more black graduates than whites – and black economic empowerment, which he said only benefited the elites.

“Then people say ‘don’t talk about these things, because it’s not politically correct’. Ladies and gentlemen, let’s be honest. The time to be politically correct must stop. We must become honest with each other, that will solve problems,” he said.

Groenewald made sure his audience didn’t end up feeling so powerless that they don’t go to the ballot box on 8 May. His party is one of the biggest beneficiaries of the proportional representation system, in which every vote counts, and which has ensured that smaller parties like his, which represent minorities, have a voice in Parliament. The bigger the turnout, the better for them.

He urged people to be active in politics.

“I know there are many people who say, ‘I’m not interested, what does politics mean to me?’ They say ‘I’m done with politics’, but ladies and gentlemen, politics is never done with you,” he said. More applause. Politics determines whether you drive on the left or the right-hand side of the road, he added.

Groenewald also spoke of self-determination, and explained that this was a “modern international term” which is “at the spear end of modern international politics”. The FF Plus, he explained, is a modern political party. On many things, Groenewald spoke much from the same script of resurgent nationalism as EFF leader Julius Malema or, say, United States President Donald Trump, or the Brexiteers in the United Kingdom.

Although the white Northern Cape enclave of Orania, where almost 100% of the residents are believed to vote for the FF Plus, is a good example of such self-determination, it doesn’t enjoy that much prominence in his speech. Instead, the FF Plus used the Hessequa Municipality in the Western Cape as an example of a local government where the party governs, and does so well. It has all of one out of the 17 seats in the council, but its proportional representative, Johannes Hartnick, is the deputy mayor. This is because the FF Plus was the kingmaker and chose to side with the DA to keep the ANC out. Hartnick is one of the few FF Plus representatives who are not white, proving that self-determination is a game some races can play together. Peter Marais, Cape Town mayoral candidate for the FF Plus, is another brown (as he describes his own skin colour) member.

“Our party will grow further this election, we will become stronger and will become a force to be reckoned with,” he told the couple of hundred people – almost exclusively white and predominantly male – who filled the theatre.

“And if you think the EFF had the power to influence the politics in this country, then they will see how the FF Plus will do this in future.”

This was possibly in reference to the Red Berets punching above their weight and setting the country’s political agenda – all with only 6% of the national vote. The FF Plus, on the other hand, hasn’t exactly been growing in the 25 years since it was founded by former SA National Defence Force head General Constand Viljoen, just in time to contest the first democratic elections.

The party believes the number of undecided white voters it has encountered will work in its favour. Wouter Wessels, party MP and elections co-ordinator (his WhatsApp status message reads: “Aluta Continua”) said although information on the number of voters planning to support the FF Plus has not been collated yet, their call centre agents picked up an interesting tendency.

“It looks like there is a big consideration in our favour. Unscientifically, about seven out of every 10 people who were phoned are unsure of who they will vote for. This wasn’t the case in the past,” he said.

Some of the Democratic Alliance’s voters to the right feel unhappy about the way the party has neglected to explicitly address the issue of (white) farm murders, and they also do not like the fact that the party is supporting black economic empowerment. This was picked up by the DA’s own campaigners.

There is, however, also anecdotal evidence to suggest that the DA might lose some of its white voters to the ANC, and these might be among the undecided voters the EFF Plus picked up. President Cyril Ramaphosa’s nation-building approach appeals to some of these voters, while others believe a strong mandate for Ramaphosa would give him the necessary power needed inside the party to fight corruption effectively, and therefore they plan to vote for him.

If its manifesto launch was small compared to the three biggest parties who competed with each other on stadium size, the FF Plus was left with plenty of money for posters. Already, in some towns, the FF Plus has taken over to such an extent that there is no space for another party. In this instance, already, the party can be said to be punching above its weight. DM