Exhibition: Through the Eyes of an Archaeologist 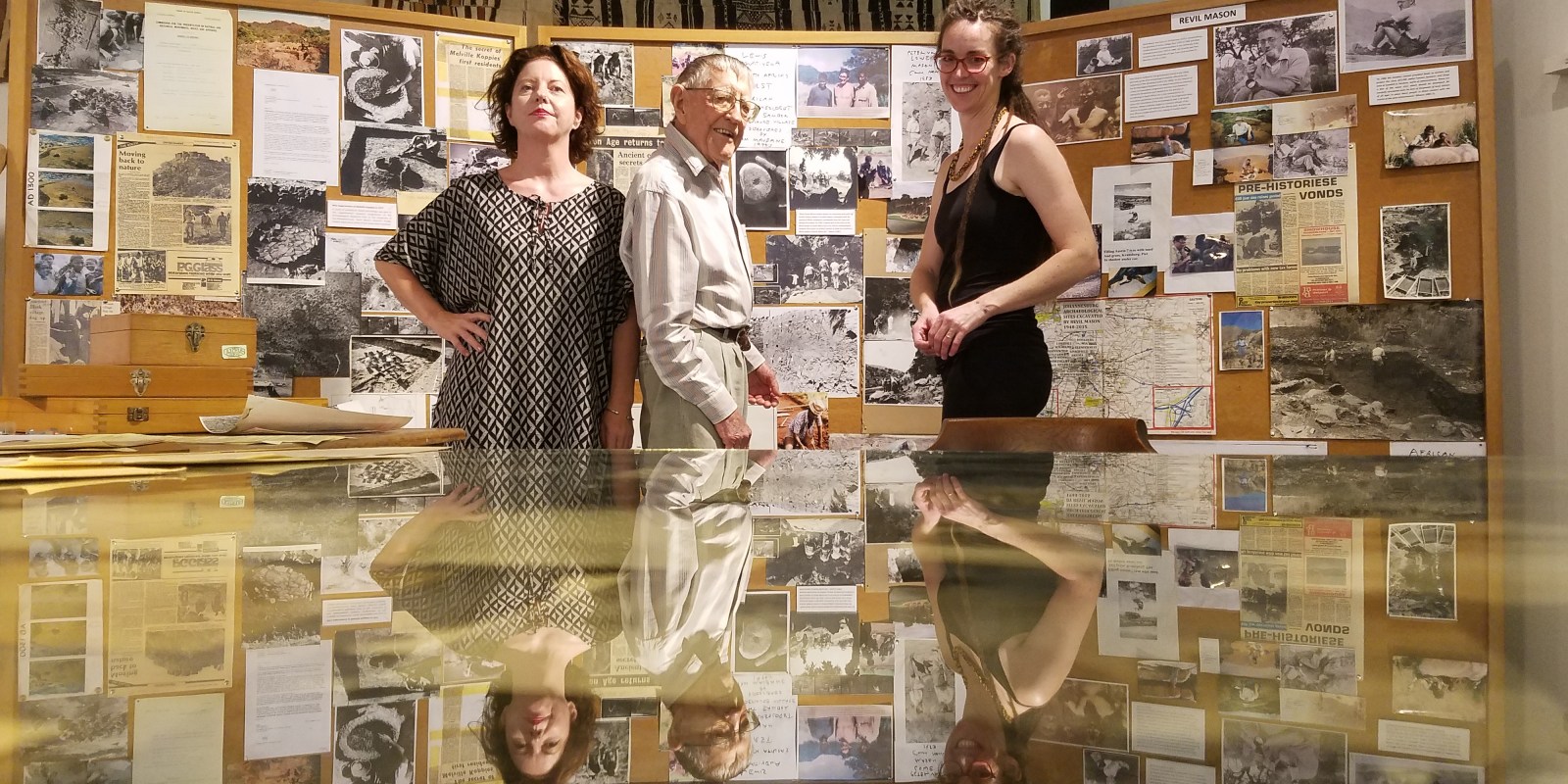 Wits University Professor Revil Mason turned 90 in February, and to celebrate his life’s work an exhibition has been organised at the Origins Centre.

On a wall in the Origins Centre at Wits University, Professor Revil Mason’s big discovery is on a loop. The faded colour film captures vistas of the Kaokoveld desert as rain clouds gather on the horizon.

It is just before the rains come, and a 25-year-old Mason is heading up the Brandberg mountain range in Namibia looking for San rock art. The young archaeologist was shooting his expedition on a 16 mm Kodachrome camera with what was still rare then, colour film.

“Now we are near the top and we are about 4,000 feet, and you can see the rains are coming, and that saved us because there was no water on the mountain,” narrates Mason.

“Here, we are climbing to the north of the Brandberg, I took this movie just before I made the discovery,” he continues.

The camera focuses on the opening of a cave.

“You see there… in there is one of the most amazing rock art finds in the world; it is called the Brandberg Picasso. It was named this because it was abstract,” explains Mason.

“I was the first guy to find prehistoric art in the high Brandberg.”

That was 1954, when Mason was just beginning his career and archaeology in South Africa was in its infancy. This was a time when archaeologists went on months-long expeditions and would return to wow audiences with artefacts collected from distant peoples and lands, recorded on early coloured film.

Mason turned 90 in February. To celebrate his life’s work an exhibition has been organised at the Origins Centre at Wits University.

The exhibition, titled Through the Eyes of an Archaeologist opens on Friday 1 March and will run until 27 April.

Besides honouring the professor, the exhibition also aims to recognise the role that South African Stone Age and early Iron Age played in the country’s history. Visitors will be able to watch Mason’s Brandberg film, which will be projected on the wall.

But it is not the Brandberg Picasso that Mason is known for.

Perhaps his greatest legacy is his unearthing the history of Johannesburg long before the discovery of gold and making it easily accessible to those outside academia.

Central to the exhibit are the education walls, boards on which have been tacked photographs, maps and newspaper clippings. These documents, which span more than 60 years, reveal just what made Mason unique as a scientist.

There are black and white pictures of schoolchildren on outings to the Klipriviersberg and Melville Koppies nature reserves. Here Mason would teach them about the walled Iron-Age sites that dot the hills of their city.

In one photo three young men can be seen, trowels in hand, carefully working a site.

“This is 1976 and these kids have been shot at by the police, a week or two before. They were part of a demonstration and I was asked to look after them. These kids were completely terrified,” he recalls.

Another photograph shows a test pit, next to an Iron-Age smelter that the professor excavated at Melville Koppies. The symbolism still grabs him decades later.

He was able to date the different layers within the pit, and discovered it stretched back from about 50,000 to a million years.

“So you can stand on the edge and you can see the whole story of people in Johannesburg going back a million years,”.

Not all of Mason’s discoveries have fared as well.

There was a 12,000-year-old Stone-Age site he excavated close to the Allendale road off-ramp on the N1 highway.

“This is an amazing site and it had been safely there 12,000 years, and within a year it was destroyed. It is now a solid mass of the most disgusting concrete,” he says.

Mason’s daughter Petra a curator of the exhibition, and besides rummaging through various collections, she also had to raid her father’s Northriding home for exhibits to display.

“All of this belongs for a new generation to see,” she says. Petra only recently returned from the US, and this exhibition has been something she has wanted to do for years.

“We have been looking for avenues,” Petra explains. “We were considering books, websites, working out how someone transfers this information.”

Petra calls herself a Braamfontein baby, as both of her parents once worked at Wits University.

The exhibition shows other bits and pieces from Mason’s long life. There is an early colour picture in the snow of his wife Judith, who would go on to become a well-known artist.

She died in 2016. The prof’s braai grid is on display. Mason lived rough when he was out in the field. “He used to use a tin cup as a pillow,” laughs his daughter.

For the other curator of the exhibition, Tammy Hodgskiss, these objects speak of a different age.

“Most archaeologists will go into the field for just a few weeks in a year now. And then come back and process the material. It is now very rare for someone to have a research position. Often there just isn’t funding for that,” she says.

But this new generation of archaeologists is still interested in Mason’s discoveries.

“They are still looking through Revil’s archives and are using new techniques to learn more about the past,” says Hodgskiss.

Mason has not put down his trowel as yet; he continues to dig.

“My present site is on my own property. It is an interesting early cattle station, and the wall is about 300 years old. And that is my last excavation and that will be 60 years of African archaeology,” he says. DM