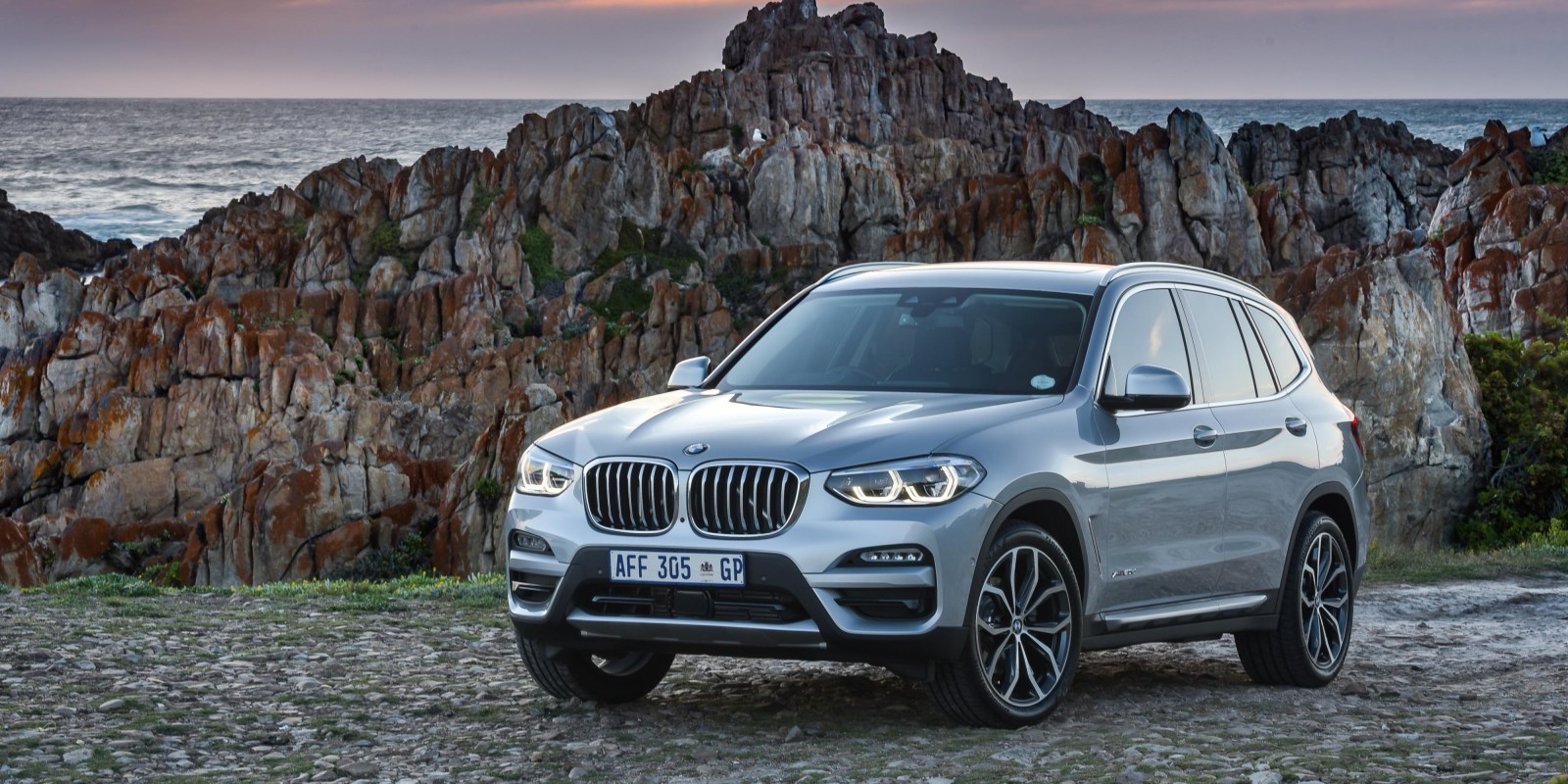 The original BMW X3 might have been tall, narrow and slightly gawky, but it introduced sporty dynamics to the compact SUV segment. Now in its third generation, the latest X3 is much more sophisticated. It’s also bigger, heavier — and not quite as zippy…

There’s a very real reason why the latest BMW X3 is significant from a South African perspective: It’s the first BMW SUV to be produced at BMW’s Rosslyn plant, north-west of Pretoria.

The X3 is proudly built in SA for local and export markets, and given the vehicle’s complexity and sophistication, being awarded the contract is a feather in BMW SA’s production cap. It also represents a R6.16-billion investment by parent company BMW AG in the local operation.

BMW touts its X-models as Sport Activity Vehicles rather than mere SUVs, and it’s true that the X3 has always placed a stronger emphasis on its dynamic virtues, rather than on practical utility.

The original was also an early player in the compact premium SUV space, a visionary move by BMW that’s resulted in more than 1.5-million X3 sales globally in the past 15 years. So, this latest model has big boots to fill.

While the X3 model offering spans both petrol and diesel derivatives across a wide engine and drivetrain choice, the two-litre turbodiesel derivative has been consistently popular. That’s because it promises a mix of user-friendly tractability, fuel efficiency and mid-range value.

Not that you’d call the X3 xDrive20d cheap: In M-Sport guise as tested here, pricing starts at R759,300 — and by the time you’ve added some of the nicer bits from the options list, you’re well into R800k territory.

Still, the top-range X3s now retail for more than a million smackeroos — before extras. And even the most affordable model is listed at R649,000. So it’s fair to say that the xDrive20d represents one of the better value propositions in the range.

Close up, you realise how big and beefy the X3 has become. In fact, given the strong BMW identity and consistent detailing, it’s easy to mistake it for an X5 — unless, of course, you have the two parked next to each other for comparison.

The trim, slim-waisted presentation of the original has made way for a beefier, more confident design that’s also more aesthetically appealing. That transition was already obvious when the Gen2 X3 arrived, but this latest model is even bigger and bolder.

Front and rear brushed aluminium scuff plates add some SUV attitude, together with tidy, low-profile roof rails. As a counterpoint, the deep sills, dual exhausts, roof spoiler and air curtain apertures are very much cast in the sporty mould.

The X3 manages to escape the typically chunky silhouette common to most SUVs, thanks to a sloping roofline that suggests a measure of aerodynamic efficiency, while short overhangs and a crisply drawn shoulder line contribute to the BMW’s athletic presence.

However, the rear haunches end up looking heavyset, rather than muscular, with can make this X3 seem ponderous from some rear-biased angles. It also cries out for bigger wheels than the standard 19-inchers to fill those generous wheel arches.

The rear view is dominated by complex-shaped taillight clusters and the obligatory tailgate, which opens deep and wide for easy access to the huge, 550-litre boot. So, practicality is one of this X3’s many talents, too.

As one would expect, the combination of a 4.7m length and 2.86m wheelbase creates a large and inviting cabin, further enhanced by efficient packaging and user-friendly ergonomics. The result is an airy interior that promises plush comfort.

The finishes are a mix of leather, soft-touch textured cladding and aluminium surfaces and accents, while this M-Sport model also features bolstered bucket seats, a thick-rimmed multifunction steering wheel and alloy pedals. From a quality perspective, the execution of the test car was rock-solid and flawless — as it should be at this price point.

Talking of price, BMW follows the trend of most premium brands by offering an extensive list of options. The upside is the ability to choose the extras you really want. The downside is they are pricey, and mostly don’t reflect in the resale value.

In reality, BMW will stock a selection of pre-ordered cars with the most popular options included. If you really want to spec a car to your own preferences, you’ll have to be prepared to wait a few months…

Under the bonnet, you’ll find one of the best four-cylinder turbodiesels in the business. With 140kW and 400Nm on tap, there’s plenty of oomph, while the eight-speed Steptronic automatic harnesses that urge with smooth efficiency.

With much of the engine’s twist on song from just 1,750rpm, you’d expect the X3 to feel frisky, but at Johannesburg’s 1,600m-plus altitudes there was some low-down lag that I didn’t expect.

Part of the reason may be the X3’s 1.8ton kerb mass, which inevitably creates some initial inertia. But I wonder if this latest model hasn’t been equipped with slightly taller gearing in the interests of enhanced efficiency, which may not be that obvious at the coast, but manifests itself at altitude.

As a result, you need to use the throttle pre-emptively at times to make sure the turbo spins up rapidly enough. It also helps to swap to manual mode.

However, I suspect that most X3 20d drivers will be more than content with the SUV’s urge, and will also prefer letting the auto ’box go about its cog-swapping business without intervention.

You can always switch from Comfort to Sport mode if you’re in a hurry, which sharpens throttle response, with the added benefit of a slightly better-weighted, more communicative steering, and brisker gear changes. There’s also an Eco mode, which saves fuel and comes in handy when baulked down in stop-start traffic.

The X3 shines on the move. Despite its bulk, the SUV handles with a mix of agility and composure that lives up to BMW’s driver’s car reputation. And while engine gets a little busy at the red end of the rev range, overall refinement is admirable.

Yes, the ride is firm, but not jarringly so, and the suspension is quite capable of soaking up most surface irregularities, while coping with abrupt dips and bumps. Wind and road noise levels are well contained, too.

The xDrive all-wheel drive seamlessly divides the urge between the front and rear axles on wet or slippery surfaces to boost traction, while the steering provides good heft and informative feedback.

It’s equally good on twisty tar or gnarly gravel, while the 204mm of ground clearance comes in handy on uneven surfaces. But don’t head too far off the beaten track: Those low-profile tyres definitely favour tar surfaces and are too fragile for any real off-road conditions.

However, the X3 is certainly capable enough on smoother gravel, and the turbodiesel’s midrange punch makes for swift average cruising speeds and effortless overtaking, while sipping fuel with reasonable frugality.

I never got close to BMW’s claimed 5.4 litres/100km combined-cycle consumption figure, but then I tend to enjoy my motoring with a decent dash of brio, which won’t win me any economy run prizes. Still, even driven with intent, the xDrive20d should maintain a diesel appetite of between seven and eight litres/100km in a mix of conditions.

Is this third-generation X3 the best one yet? In terms of space, comfort, refinement and composure, it’s definitely a step ahead of its predecessor.

It also maintains BMW’s sporty reputation as far as handling is concerned. And we haven’t even touched on all the tech and connectivity, ranging from a smart key, driver personalisation and inductive device charging to BMW’s Connect app, which allows extended remote functionality and features.

I miss the pared-down wieldiness and functionality of the original X3, while this latest model’s lack of low-down sparkle can be off-putting in some situations. Given the soft economy, a full-house X3 becomes an expensive purchase, too.

But the overall package presented here is well-rounded and ultimately satisfying, suggesting that the X3’s success rate isn’t likely to slow down anytime soon. DM