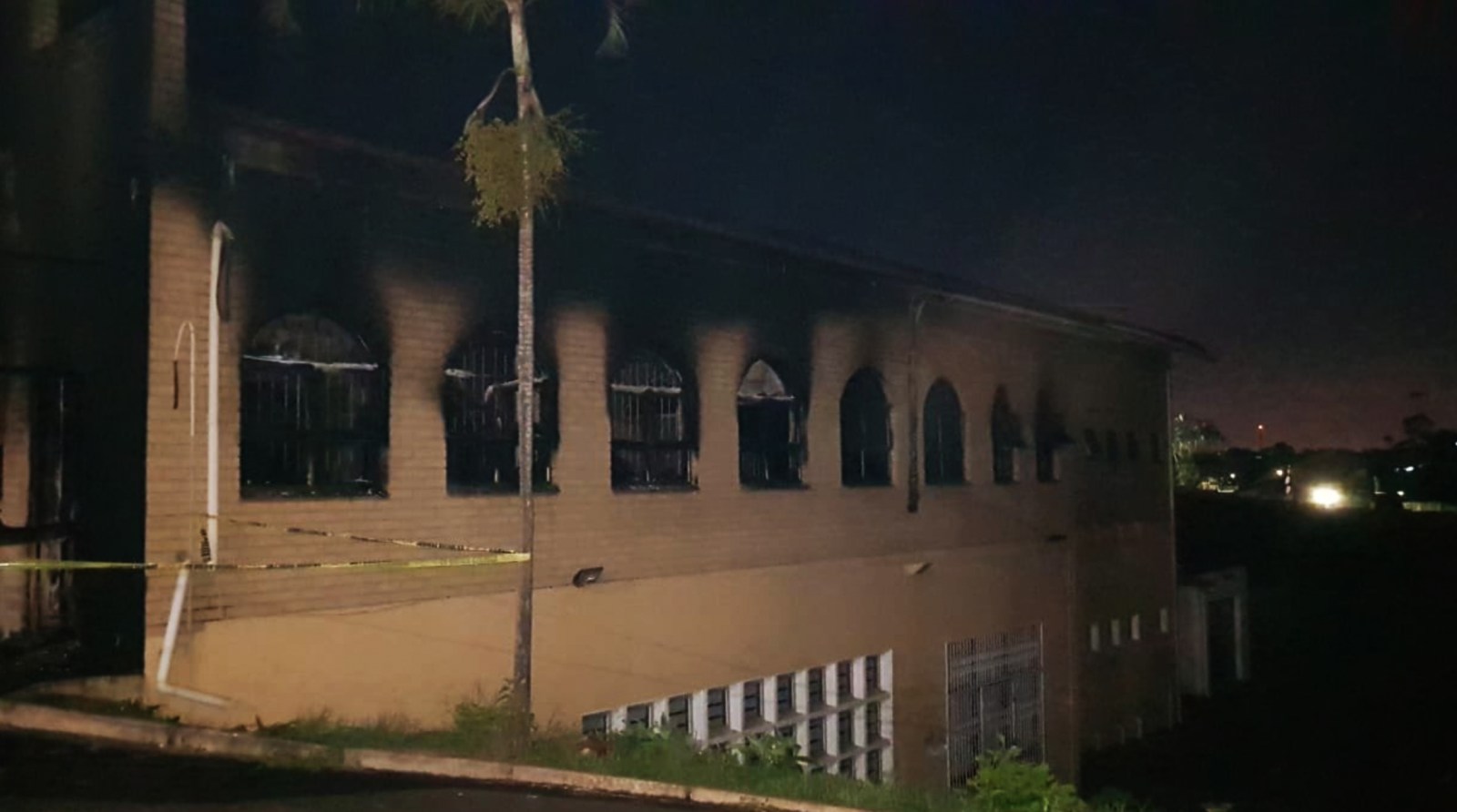 There was a series of strange and unprecedented attacks on South African mosques in 2018 – but with the arrest of a Durban-based gang in October, many were hopeful that these incidents were in the rear-view mirror. Yet, since the arrest of the suspects, further incidents targeting either imams or mosques have taken place – the latest of which saw a Durban mosque set on fire on Monday.

In the early hours of Monday, 25 February, a mosque in the Effingham Heights area of Durban was badly damaged by fire after perpetrators apparently poured petrol through windows and set the building alight.

Though three employees of the Faizane Mariam Masjid were asleep inside the building at the time, all managed to escape without injury. The perpetrators, meanwhile, appear to have escaped without detection.

“The neighbour across [the road] did apparently see some guys running, but the guys that were in the mosque, in the classroom resting, when they heard glass breaking they got up and by the time they looked inside the other classrooms the fire was already on.”

Khan says the incident has “come as a shock for us because it’s the first time we [have] experienced something like that”.

Condemnation from Muslim leaders of the apparent arson attack was swift. A statement from the KwaZulu-Natal Council of Muslim Theologians expressed “shock and anguish” at the news.

“A masjid [mosque] is a place of worship and is sanctified ground for Muslims,” it read. “Places of worship are respected by all peace-loving individuals and should be places of safety and security.”

The Ahle Sunnat Wal Jamaat South Africa, meanwhile, offered a reward to anyone who could provide police with information.

“Such hatred and disrespect of faith should have no place in South Africa and we hope to see the swift apprehension and full force of the law to be brought against these criminals,” the organisation stated.

The degree of concern expressed is not hard to understand. The apparent attack on the Effingham mosque follows 10 months of mysterious acts of violence targeted at local mosques and Muslim leaders.

Though the timeline of these events is generally dated as starting from the deadly knife and fire attack which occurred on 10 May 2018 at a Shi’a mosque outside Verulam in KwaZulu-Natal, a previous incident had taken place a few days earlier in Pretoria.

On 30 April 2018, an assistant imam at the Metro Mosque in Arcadia was reported by the Laudium Sun as having been stabbed in the mosque by a worshipper just after evening prayers.

Details of this attack are sketchy, with the suspect described as “very volatile” and possibly of foreign nationality. Repeated attempts by Daily Maverick to obtain comment from the mosque have been unsuccessful.

This list is not exhaustive. It excludes incidents later found to be hoaxes – such as the discovery on 30 July 2018 of an apparent explosive device at a mosque in Roshnee. It also excludes incidents which can more simply be explained as “typical” South African crime – such as the 8 October, 2018 attack on the caretakers of the Oudekraal kramat in Cape Town, where the motive appeared to be robbery; or a June 2018 attack on the car of a Cape Town imam which was attributed to a “botched hijacking”.

In October 2018, police arrested a group of men who have since been charged with the so-called Durban bombings, as well as the attack on the mosque near Verulam. The 12 suspects appeared in the Verulam Magistrate’s Court last week, with the matter postponed until 15 April. The state claims that ISIS propaganda material was found at the gang’s headquarters. All suspects are currently out on bail.

Though one media report on the Effingham mosque fire attack attributed the motive to tensions within the mosque resulting from a disgruntled former staff member, mosque manager Khan warned against speculation.

In the case of the Verulam mosque attack, the Hawks were initially quick to suggest the motive was similarly related to internal mosque tensions – but there has been no suggestion that the men since arrested for the attack are linked to the mosque in question.

When contacted by Daily Maverick this week with regards to the Effingham mosque attack, Hawks KwaZulu-Natal spokesperson Simphiwe Mhlongo responded: “I am not aware that this matter is being investigated by the Hawks.”

A spokesperson for SAPS KwaZulu-Natal, meanwhile, replied to Daily Maverick’s questions about the attack with: “Hawks are investigating the case,” and a request to direct queries to Mhlongo.

The Muslim Judicial Council (MJC) says it will wait for the police report on the latest incident.

“It is a deep concern to the Muslim leadership that our mosques have become targets, where these arson attacks or other forms of attacks have taken place,” MJC deputy president Moulana Abdul Khaliq Ebrahim Allie told Daily Maverick.