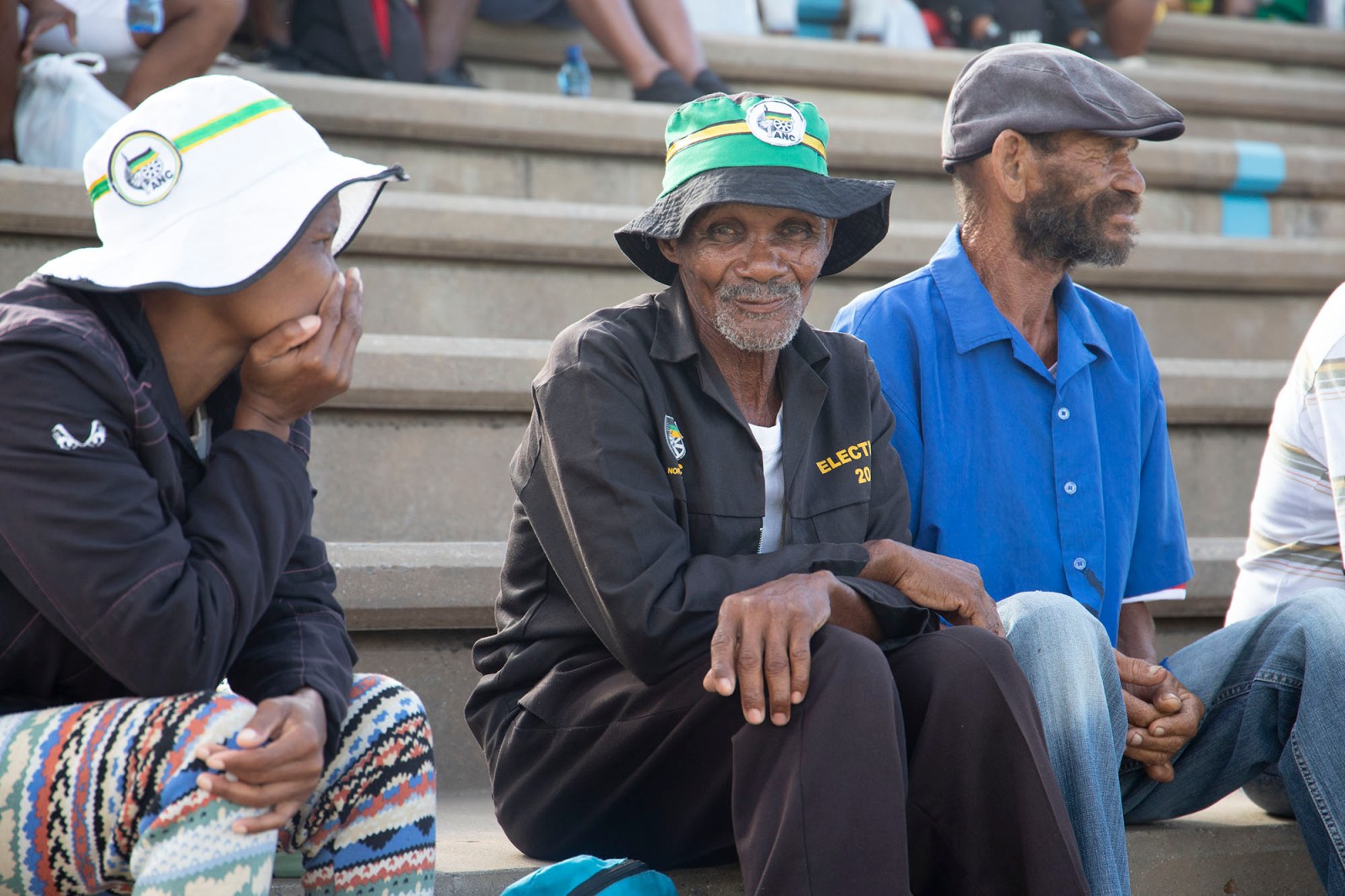 ANC President Cyril Ramaphosa engages with a community member during his door-to-door campaign on Tuesday 26 February, in Vosloorus, Ekurhuleni. Photo by Ayanda Mthethwa.

With the national elections around the corner, the race for votes has begun. Promises are being dished out and people are hopeful that things will change for the better. The ANC kick-started its campaign trail on Tuesday in Vosloorus, Ekurhuleni.

After ANC President Cyril Ramaphosa dropped in for a visit on Tuesday, 26 February, Avon Mthethe, 83, is one of the people who have hope that change will come to her community. Mthethe single-handedly takes care of her three grandchildren with her grant money. She must buy food, school uniforms and other home necessities.

Mthethe told Daily Maverick, after Ramaphosa visited her home in Vosloorus, that South Africans should be patient with the President as he is still new in the post.

Accompanied by national, provincial and regional members of the ANC, Ramaphosa embarked on a campaign trail that began in Fred Mlaba street, Vosloorus.

Pravin Gordan (Public Enterprise Minister), Fikile Mbalula (National Head of Elections for the ANC) and David Makhura (Gauteng Premier) were among the leadership that accompanied the President. Seven houses, mainly headed by the elderly, were paid a visit.

Speaking in Zulu, Zakhele Ngwenya, who matriculated last year and is a resident of one of the seven homes, told Daily Maverick that he is “Ngijabulile” (happy) that their home was selected. He is also happy that the President promised that he would receive a bursary to fund his studies. Ngwenya is in the procss of upgrading some of his school subjects so that he can further his studies.

Zakhele’s mother, Martha Ngwenya, also expressed gratitude in the hope that she would no longer have to wake up early in the morning to wait in long queues to receive her medication. Her ailing legs no longer allow her to stand for too long. She was upbeat, she said, after Ramaphosa promised that someone from the clinic would be tasked with delivering her medication to her home.

However, the community members’ excitement was accompanied by a tinge of doubt and worry. A community member who did not want to be named, told Daily Maverick: “They come and feed us lies just to win our votes. After that we are forgotten, but we will vote because we don’t have a choice. Other parties don’t seem to have unity like the ANC does.”

Community members sang and chanted Ramaphosa’s name before his arrival. Lizzy, a community member who did not want to disclose her surname, told Daily Maverick she took a day off from work just so that she could see the President. She also expressed hope that the challenge of unemployment, which is rife in the community, would be tackled.

During his public address at Lesedi Shopping Complex, Vosloorus, which followed the door-to-door trail, Ramaphosa spoke of concerns from parents about the rate of unemployment in the area.

“The difficulty that people in this community have is youth unemployment. That was made obvious by the people. But I assure you that day and night we are busy figuring out new ways to create employment,” said Ramaphosa.

He also promised that in the next five years, the ANC government would be tackling unemployment and economic growth prospects.

He also assured the community that corruption would be dealt with.

“Corruption must end. Those who steal from the community will be arrested and jailed. They will be wearing orange overalls. Government money should do good in the community,” said Ramaphosa, who is due to be campaigning in the Western Cape from Wednesday afternoon. DM