How a protest movement led to 700 people making an unus... 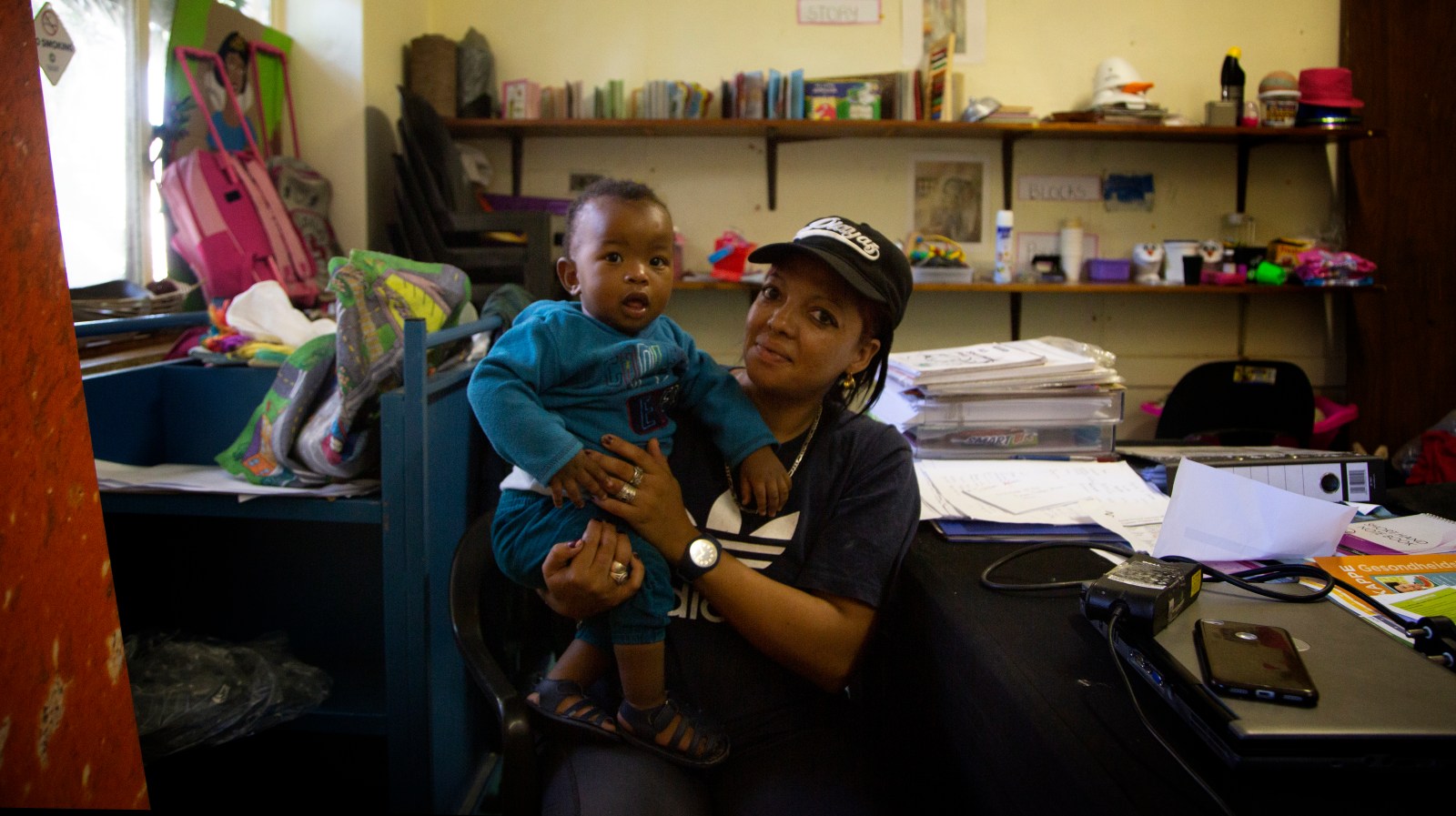 Youth Co-ordinator and Reclaim the City leader Shaneeka Abdullah sits in the crèche she built with one of the residents’ child, nicknamed Boy Boy, on 21 February 2019. Photo: Tessa Knight

Three years after the formation of Reclaim the City, the social action group is still fighting for redistribution of underused land in inner cities. Its slogan — Where People Live Matters — has resonated with evictees in inner-city Cape Town suburbs who do not want to move to the faraway transit camps.

In the middle of Cape Town’s inner city, 700 people live inside an old, unused and derelict hospital. In just three years a lively community of working-class families, many elderly, or single parents, have put down roots in one of Cape Town’s inner-city business and residential areas.

Behind all this activity is civic action group Reclaim the City, which celebrated its third birthday in February. The movement campaigns for the redistribution of empty and unused public land in the inner city to the working class and poor citizens.

In March 2017, a group of activists occupied Woodstock Hospital and Helen Bowden Nurses Home in the Waterfront, two long-abandoned state-owned properties in the CBD.

The occupation was intended to highlight that working-class people from black and coloured families are not able to afford housing in the inner city and are forced to spend large amounts of money on travelling from the outskirts of town into the city to work. This segregation of space is a remnant of apartheid spatial planning, which prevented people of colour from occupying land in city centres.

Woodstock Hospital, which has been dubbed Cissy Gool House after the anti-apartheid activist and first black woman to graduate from the University of Cape Town’s Law Department, is now home to people of every race, class and religion. Although the property is old and has plumbing and electrical issues, it is home to a vibrant community of people from different backgrounds. Each small room is tidy and respectable, with residents decorating according to personal taste.

On the top floor of the four-story building, Shaneeka Abdullah, youth co-ordinator and one of the leaders in Cissy Gool, has started a crèche. Abdullah’s goal was to allow single parents in the occupation movement to look for jobs without worrying about their children.

“It’s not about the money, it’s about supporting the youth and kids in the occupation movement,” says Abdullah.

Today, children in Cissy Gool are being taught computer literacy, how to read and write Afrikaans and other life skills they otherwise would not have access to.

But life is difficult in the occupied property. According to activist Karen Hendricks, chapter leader of Reclaim the City’s Woodstock Chapter and a resident of Cissy Gool House, “gentrification has a lot to do with our problem. Public land is sold to private developers and government forgets about us — the people who used to live here, the people who work here”.

Speaking to Daily Maverick, residents of Cissy Gool House emphasised that, after being evicted from their homes in the inner city for being unable to afford ever-increasing rents, they have nowhere else to go.

The only emergency housing facility in Cape Town is Wolwerivier, a transit camp about 30km outside the city. Previously, evictees could move into Blikkiesdorp, another relocation camp made of tin shacks in Delft, about 22km from the CBD.

But in 2018 GroundUp reported that Bret Herron, then the mayoral committee member for transport and urban development, said the City no longer used Blikkiesdorp as a temporary relocation area. Both Blikkiesdorp and Wolwerivier are wracked with high crime rates and gang violence, as well as hygiene and safety issues.

Residents of Cissy Gool House are not interested in moving outside of the city.

“We will not go to Blikkiesdorp or Wolwerivier; we won’t go,” said Hendricks. “Our history is here and we work here, but we can’t live here. The City doesn’t want us to live here.”

The issue of land and housing in the City of Cape Town is, as Hendricks says, “a burning issue”. In December 2018 Western Cape Premier Helen Zille approved the transformation of the Old Conradie Hospital in Pinelands into social housing. Although construction is expected to start only at the end of 2019, 3,602 new residential units will be built. Hendricks estimates that 1,200 units could be built in the area of Cissy Gool House.

But occupants of the property do not want to be moved to Wolwerivier if the City plans to demolish the buildings and construct affordable housing on the old hospital premises.

“We want to stay here. This is our home. We don’t want to move far away; our kids and our jobs are here,” said Amanda Gericke, a Cissy Gool House resident.

Although Woodstock Hospital was owned by the province when activists initially took occupation of the property, the provincial cabinet sold the property to the City of Cape Town in December 2017 on the condition it be used to build social housing.

However, the Department of Transport and Public Works told Daily Maverick “the City of Cape Town has not as yet resolved to take transfer of this property into its name, as far as we are aware”.

Daily Maverick asked City of Cape Town mayoral committee member for human settlements, Councillor Malusi Booi, for comment. Booi was asked when the hospital was taken over, if the City had plans to develop social housing, how many units would be built in the area, if the current occupants were consulted and what would happen to the occupiers if the City did eventually build social housing in the Woodstock Hospital area.

The Department responded with the following:

“The City of Cape Town’s human settlements directorate is following due process. We are committed to providing affordable housing and social housing opportunities in our inner city.”

A statement issued by the Cape Town Mayor Dan Plato at a press briefing on 25 February said:

“We continue to work towards reversing the legacy of apartheid spatial planning by promoting transport-oriented development. At the same time, working to create affordable and inclusionary housing on well-located land close to public transport and job opportunities is a cornerstone of our efforts to bring redress and greater parity of services and opportunities for all residents in Cape Town.”

Despite uncertainty around ownership of the property, in October 2018 the Western Cape High Court issued an interim interdict preventing Reclaim the City from hosting a community event at Cissy Gool House.

According to GroundUp, the City argued that residents occupied the hospital not “because they are homeless”, but to “make a political statement”.

While the interim interdict prevented occupants from hosting an event open to the public, it did not allow the City of Cape Town to evict the occupants already living in Cissy Gool House. Instead, the City recorded the names and ID numbers of the 700 people living on the property, and these families cannot be evicted.

Despite transit camps such as Blikkiesdorp and Wolwerivier, homelessness continues to be a major problem in the Western Cape. In December 2018, the Western Cape Government estimated that 4,862 homeless people live in the greater Cape Town area, with about 700 people living in the central business district. This number would double if 700 people did not live in Cissy Gool House.

Although residents of Cissy Gool House cannot be evicted in the near future, there is nevertheless an air of uncertainty at the property. Nobody knows what will happen next, or if they will be living there when Reclaim the City celebrates its fourth birthday. DM