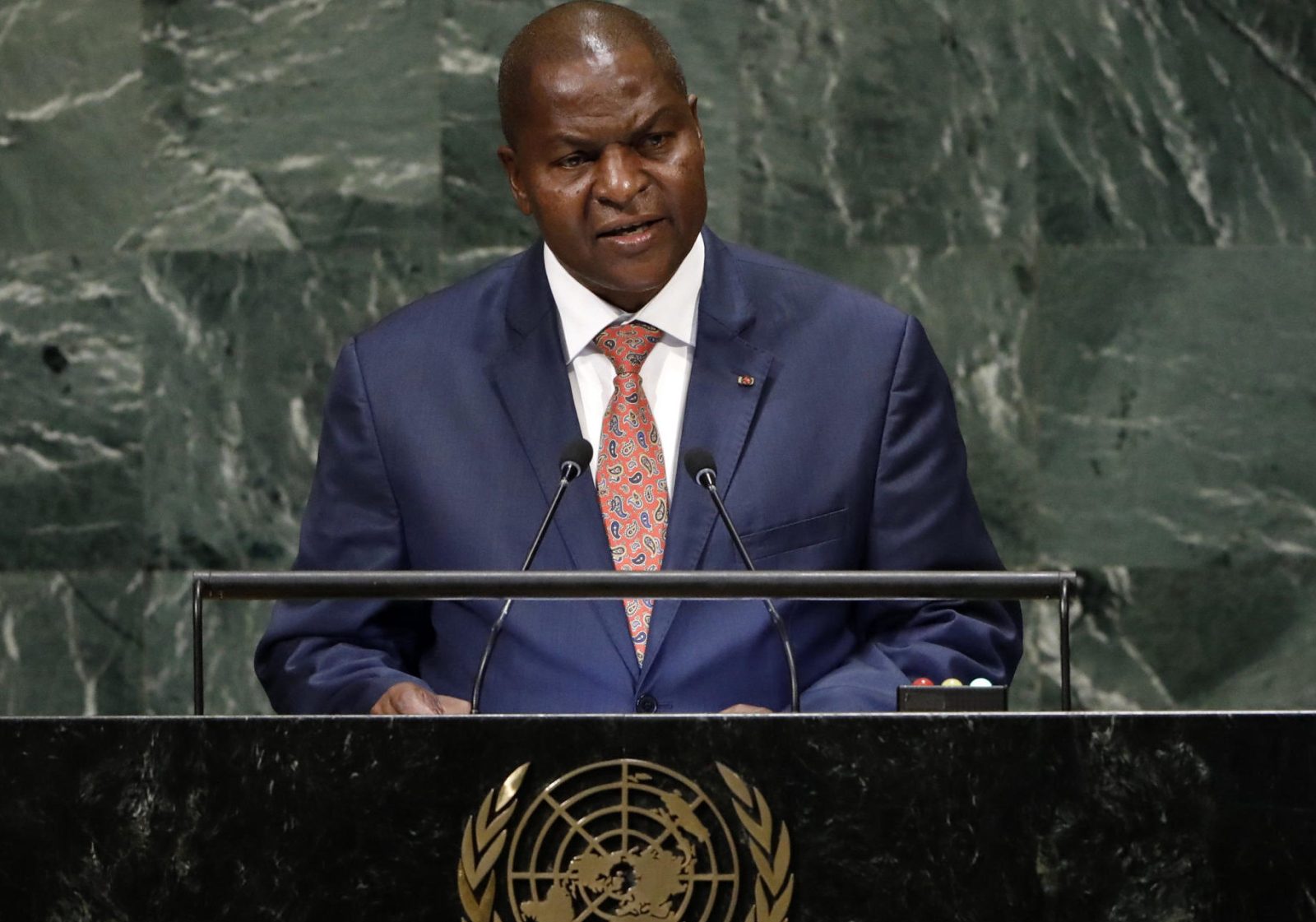 President of the Central African Republic Faustin Archange Touadera speaks during the General Debate of the General Assembly of the United Nations at United Nations Headquarters in New York, New York, USA, 26 September 2018. France has accused Touadéra’s government of failing to engage in a constructive dialogue with the political opposition. (Photo: EPA-EFE/PETER FOLEY)

The African Union-led accord could be a turning point – but what makes this one different?

The 6 February peace accord between the Central African Republic (CAR) government and 14 recognised armed groups is the eighth such agreement since the country descended into violence in 2012.

It came after 10 days of talks in Khartoum, building on more than two years of intense negotiations under the African Union (AU) Initiative for Peace and Reconciliation in the CAR. The AU initiative prevailed over all other parallel efforts and finally united them in one single process. Armed groups control about 80% of the country.

Although this agreement is a diplomatic success for the AU and its partners, some are sceptical about its viability. How is it different from the previous seven deals, and from the half-dozen major agreements signed since the 1997 Bangui Accord?

The agreement is a comprehensive document covering the fundamental principles of a sustainable resolution of the conflict. It also outlines the roles and responsibilities of the government, armed groups, region and international community.

It contains provisions on the key issues of disarmament, demobilisation, reintegration and repatriation; justice and national reconciliation; seasonal cattle migration; transitional security arrangements; and democratisation. Also in the text is a mechanism for the implementation and monitoring of the agreement.

Throughout the months of consultation, the two major bones of contention – especially between the government and armed groups – were about impunity and power sharing. Although ready to grant some concessions regarding power sharing, the government was reluctant to send the wrong message and undermine the legitimacy of President Faustin-Archange Touadéra.

The government was unwilling to grant a general amnesty to armed groups, as impunity was recognised as a major contributor to the recurring violence. Citizens also demanded accountability for war crimes and crimes against humanity during the 2015 Bangui Forum on National Reconciliation. This position is reaffirmed in the latest agreement, although some provisions could still allow impunity.

Several clauses in the latest pact include concessions by the key players and provide for a measure of power sharing, namely the sections on decentralisation and the establishment of an inclusive government.

A potentially divisive issue will be the composition of the inclusive government. It remains to be seen which ministerial portfolios will be allocated to armed groups and whether all groups will be included. Their reaction to those appointments and to further power sharing in the administration will be crucial.

It is also proposed that the National Assembly pass a law giving former CAR heads of state special status with pecuniary benefits. This decision seems to favour exiled former presidents François Bozizé and Michel Djotodia, who were consulted during the negotiations.

Although general amnesty isn’t explicitly granted in the agreement, two clauses leave room for restorative justice and presidential discretion. A Truth, Justice, Reparation and Reconciliation Commission will be established, which should help bring peace and stability.

There’s also the possibility in the accord of Touadéra using the presidential pardon in a discretionary manner, should certain individuals – particularly leaders of the armed group – be convicted. However, the Truth, Justice, Reparation and Reconciliation Commission’s decisions cannot affect cases before the International Criminal Court or the CAR Special Criminal Court.

One obvious limit to this approach is that violence could break out between the time someone is arrested or sentenced, and a presidential pardon is given. Also, selective presidential pardons may seem unfair to those who don’t get them, sparking more conflict.

Before reaching the point of a presidential pardon, however, the parties – government and armed groups – have to begin implementing the peace agreement. This hasn’t happened in the past. Getting the parties to sign is no small achievement – and the AU initiative did deliver in this regard, but the real work starts with implementation.

Resistance is evident from both sides and a new government is still keenly awaited. The absence at the Bangui signing of some key armed group leaders, notably Noureddine Adam, Abdoulaye Hissen and Ali Darassa, also raises concerns about the next steps.

The planned establishment of transitional mixed special security units – composed of government forces and armed group members – as provided in the agreement will be a real test of the willingness on both sides to work together.

Overall the current context seems to favour an enduring peace deal. The AU initiative’s success in uniting all stakeholders under one banner shows a level of commitment from all external actors to seeing the agreement through, despite dissenting voices. In the past, external actors to the CAR lent financial and material support to different internal factions, exacerbating tensions and undermining the return of a lasting peace.

The burden is also on the CAR protagonists themselves to commit to the deal’s implementation. That the armed groups met in Khartoum shows a desire on their part to change the status quo. The AU and government’s insistence on limiting the dialogue to the government and armed groups, so as to avoid a repeat of the Bangui Forum, was an appropriate strategy.

When Touadéra became president in 2016, he vowed to engage in substantive dialogue with the CAR’s many armed groups. The process has been long and gruelling, but this month’s deal could be the foundation on which peace is finally built.

The AU, as the head guarantor and facilitator of the CAR peace process, must remain steadfast on implementation. It should ensure, through taking the appropriate measures set out in the agreement, that the hard work done thus far isn’t wasted and that the CAR’s people finally see peace. DM