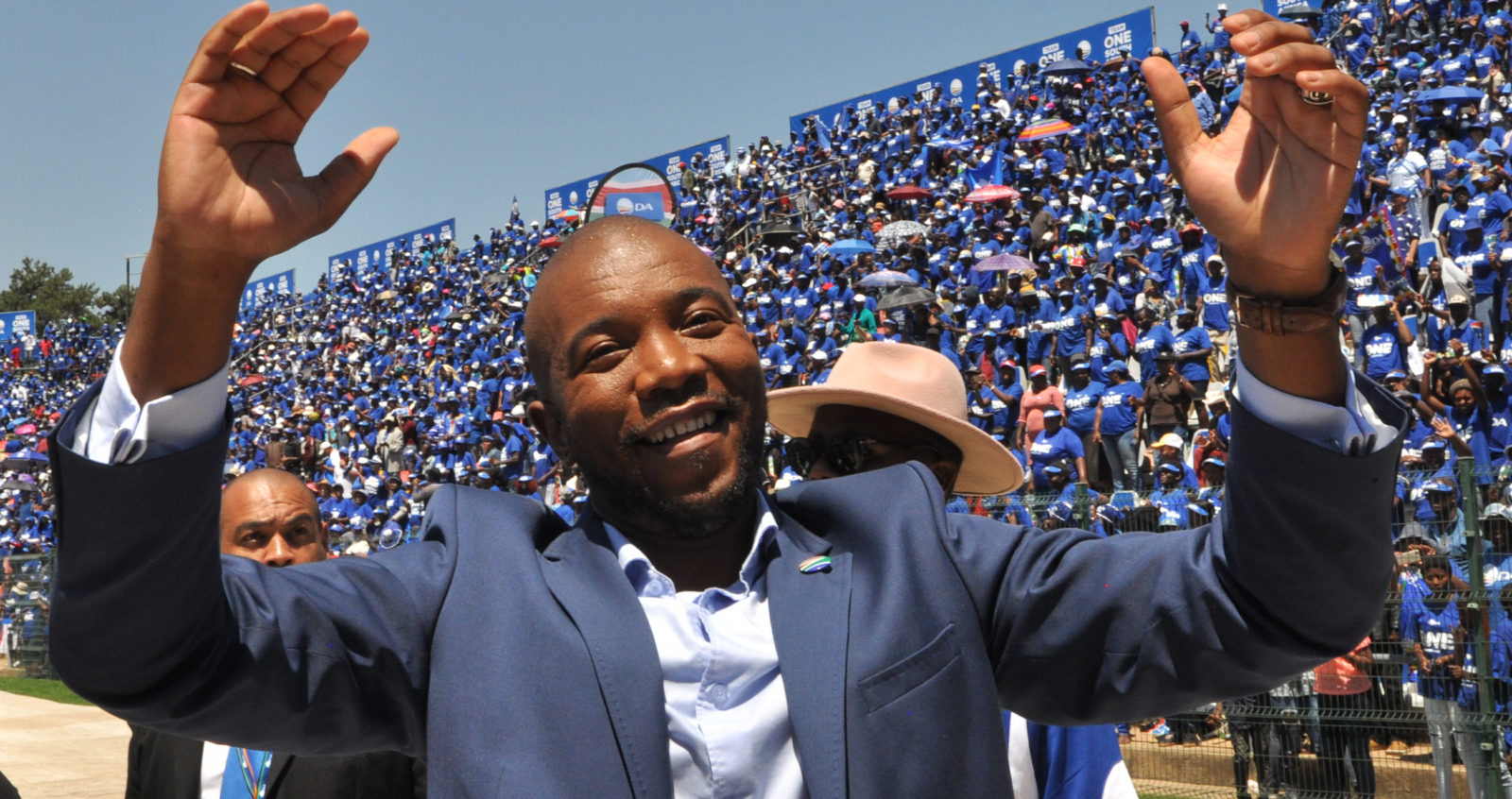 The 59-year-old Maria from Mabopane — about 90km north of Johannesburg — had a long day at the DA’s manifesto launch on Saturday.

“We left in the buses early,” said the mother-of-four and grandmother, who earns some money from providing daycare services. She is also a DA volunteer and organiser, and sat, stoic and determined, through the rally programme.

“I want to see a better life for all,” she said, “and the DA will do it for all. It was hot, yes, but that’s not a problem. What we want is a better life.”

Maria was also concerned about corruption.

“VBS ate our money, and I hear my house may be repossessed. It’s the ANC’s fault. The ANC made a lot of mistakes.” She is also worried about the unemployed youngsters who sit around smoking nyaope. The DA, she said, did something by coming to the community to help with skills training.

Abraham, 31, from Modimolle, almost 200km north, was also at the stadium, although he didn’t stay seated in the hot stands for DA leader Mmusi Maimane’s speech. Still, Maimane is his favourite leader.

“Obvious!” he said. “We are here for change, we want jobs, because we are not working here,” he said.

He has matric, but didn’t study further “because of the finance”, and does piece jobs. The ANC’s “stealing the money” was to blame for this. They gave tenders to their friends only, which meant there were no opportunities for those outside their circles, Abraham said.

Those who pitched up for the launch received blue DA T-shirts proclaiming the party’s election slogan: “One South Africa for all”. Many said jobs and education were what they voted for.

Maimane addressed that in his speech.

His speech, which was well over an hour long, was well received. He was cheered for saying that the DA is a party for all South Africans, and for speaking out about corruption and the stolen money. He promised a 15-year mandatory sentence for corruption (cheers), and a clampdown on crime (loud cheers).

Johannesburg mayor Herman Mashaba, who promised to clamp down on “undocumented foreigners” (two A4 pages are filled in the manifesto with promises on securing South Africa’s borders), also received rousing applause.

Maimane mentioned Mashaba by name three times, and the DA’s Gauteng premier candidate and former Tshwane mayor, Solly Msimanga, only once (it might have been wise to punt him a little more in a province the DA is eyeing). There were cheers when he thanked Western Cape premier Helen Zille for making the Western Cape a showcase for good governance — because in the Western Cape, people have jobs, Maimane said. Zille herself was absent, because she “had other priorities”, a leader from her province explained. She hasn’t really been at DA events much since Maimane took over the leadership in 2015.

If the event felt like déjà vu, it was because, before the local government elections in August 2016, the DA had its manifesto launch at the Rand Stadium too. Then, it was eyeing the Tshwane and Johannesburg metros, and surprised itself by getting both. Possibly the organisers felt that the formula worked back then, and shouldn’t be tampered with much now.

“The same people (who said the DA couldn’t win the metros) are once again telling us what the DA can and can’t do. And again we will prove them wrong,” Maimane proclaimed. “Change is coming! We did it before, and we’ll do it again.”

Nothing is impossible any more. The ANC’s support in Gauteng has been on a downward slope. In 2014, the party had 53.6% of the votes in the province. In the 2016 local government elections, the total votes for the party dropped below 50%. The ANC’s own research showed that young people are abandoning the party of their parents in favour of the opposition — mostly the DA. Only 42% of 18- to 25-year-olds told the ANC’s researchers that they’d vote for the governing party. Fortunately for the ANC now, this is an unreliable voter group, but it could spell trouble for the future.

The DA, however, faces its own troubles, such as the fact that ANC president Cyril Ramaphosa appeals to many of its own voters, and dirt doesn’t cling to him the way it does to his bogeyman predecessor, Jacob Zuma. Also, some voters still perceive the DA as a white party.

The party’s white voters, in turn, are considering their options more carefully in 2019 than in the past. Those on the left feel they could vote for the ANC as a vote of confidence in Ramaphosa to strengthen his hand against corruption and to grow the economy. Those on the right, the DA’s polling shows, might desert the party for the Freedom Front Plus because they disagree with the DA’s support for black economic empowerment and because they feel the DA has not been outspoken enough about the murder of white farmers.

The DA’s manifesto launch event was well-choreographed and punctual, but ultimately as lacklustre as the coffee that was served in the media lounge — which was, dramatically, off-bounds to many of the party’s MPs. They had to sit in the stands, as only media personnel and premier candidates were allowed into the lounge. There were isolated scenes of great anger at the lounge entrance.

The rally was loud, the day’s programme and Maimane’s speech too long and a disturbing and persistent smell of something like dog poo pervaded the air — perhaps from nearby industries.

The manifesto rally was, however, really aimed at the “millions” who watched it on television (as one of the MCs said) or on the web and social media, and also at the supporters who travelled hours to be there. Their opinion on 8 May is ultimately what will count. DM

From Uber to courier to put food on the table