Mrwebi grilled on his decision to drop Mdluli case

Mrwebi grilled on his decision to drop Mdluli case 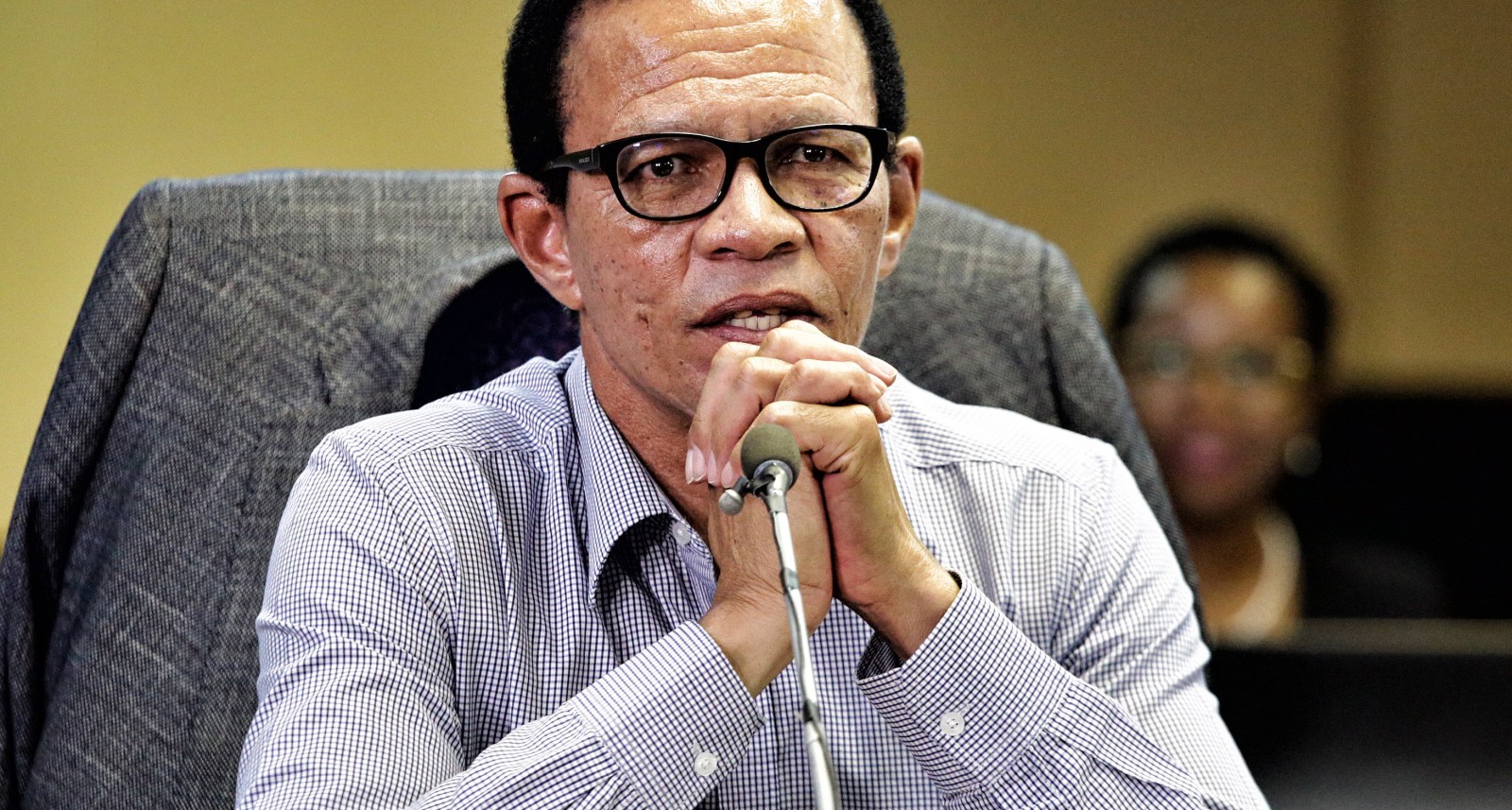 Suspended special director of public prosecutions Adv Lawrence Mrwebi testifies during the Mokgoro inquiry in Centurion on February 20 2019. The inquiry which is led by retired justice of the Constitutional Court Yvonne Mokgoro will investigate NPA's Nomgcobo Jiba and Mrwebi's fitness to hold office. (Photo by Gallo Images / Phill Magakoe)

When Lawrence Mrwebi was appointed head of the Specialised Commercial Crimes Unit at the National Prosecuting Authority, within a month he decided to drop the fraud and corruption charges the prosecuting authority was pursuing against former Crime Intelligence boss Richard Mdluli. Of particular interest to the inquiry was how, when everyone around him was saying there was a good case to prosecute, he decided otherwise.

During his cross-examination on Thursday by evidence leader Nazreen Bawa, Lawrence Mrwebi argued that although the “provisional charge sheet” presented to him when he was briefed about the case contained information regarding the fraud and corruption charges against Richard Mdluli, there was no direct link to the Crime Intelligence boss — only suspicions.

Mrwebi spoke at the Mokgoro Inquiry that seeks to determine his fate at the NPA a day after he had testified that since his tenure as head of the Scorpions in KwaZulu-Natal in 2003, senior prosecutors had a target on his back after he wrote a report implicating them of misappropriation of funds.

Nomgcobo Jiba, who is also a subject of the inquiry, told her side of the story on Thursday about the allegation that she halted prosecutions in high-profile cases. Jiba said she was a victim of dangerous and unjustified political attacks within the NPA.

After Jiba’s testimony, Bawa questioned Mrwebi about what formed the basis of his decision on the Mdluli matter, especially when lead prosecutor Chris Smith and his supervisor Glynnis Breytenbach had said there was a prima facie case to prosecute.

On 30 November 2011, Smith and Breytenbach sent Mrwebi a memo to motivate why the case should continue, a view shared by the Jan Ferreira, a senior prosecutor in the NPA and the current Deputy Director of Public Prosecutions Sibongile Mzinyathi.

However, Mrwebi was of the view that “there was no unauthorised gratification” of public funds by Mdluli. Instead, the allegations stacked up against Heine Barnard (Mdluli’s subordinate).

Bawa proceeded to read out the known facts contained in the memo sent to Mrwebi by Smith, urging him to prosecute.

According to Bawa, Mrwebi was showed how Mdluli’s car was traded in for two BMWs purchased at Atlantis Ford, a supplier of service vehicles to the Crime Intelligence Unit and a R90,000 shortfall was covered by a discount meant for his unit and a loan from the supplier.

Furthermore, the two cars were found in Mdluli’s house and registered to his wife.

Mrwebi agreed that the vehicle traded in belonged to Mdluli, with bank records supplied showing that he had been paying for the vehicle out of his personal bank account. And that Barnard had bought the two vehicles for Mdluli.

“From a provisional charge sheet this is considered unlawful gratification,” said Bawa.

Mrwebi did not agree, and stated that this did not link Mdluli and it was not actual evidence. It was only a summary of the events and he was interested in studying the actual docket, which had not been submitted to him, said Mrwebi.

“What was in the docket?,” asked Bawa.

“Those things were in the docket, but do they prove the crime in question?” asked Mrwebi.

“On one side you say it does not prove the crime and on the other side we have Ferreira, Smith, Breytenbach and others, who say it does,” said Bawa.

Mrwebi asked where all the evidence mentioned in the memo was. According to him, there was no direct link to Mdluli, only suspicions because it involved his car.

“His vehicle gets traded in without any evidence of his knowledge?” asked Bawa.

“That is one of my positions in this matter,” said Mrwebi.

“And a loan gets made under his name,” said Bawa.

“What does it prove? I did not see evidence of unlawful gratification,” said Mrwebi.

Bawa questioned Mrwebi about his earlier testimony on Wednesday, where he explained how he told Smith and Breytenbach in a memo sent on 5 December 2011 that he was dropping the charges after consulting Mzinyathi, in accordance with the NPA Act, although he dated it 4 December.

According to Mrwebi, it was not true that he had dropped the charges before consulting — but he used the same letterhead for different correspondences and had forgotten to edit the date to the correct one.

Mrwebi also stated that 4 December 2011 was a Sunday, and he did not work on a Sunday.

Bawa asked him how, if he did not work on a Sunday, he would have any letterhead dated the 4th to begin with. Furthermore, the 4th comes up five times in his NPA official correspondence, said Bawa.

“You would not have an existing document on 4 December, “ said Bawa.

Mrwebi said he did not have a further explanation as he was questioned about it in a disciplinary hearing. It is an error he still regretted, he said.