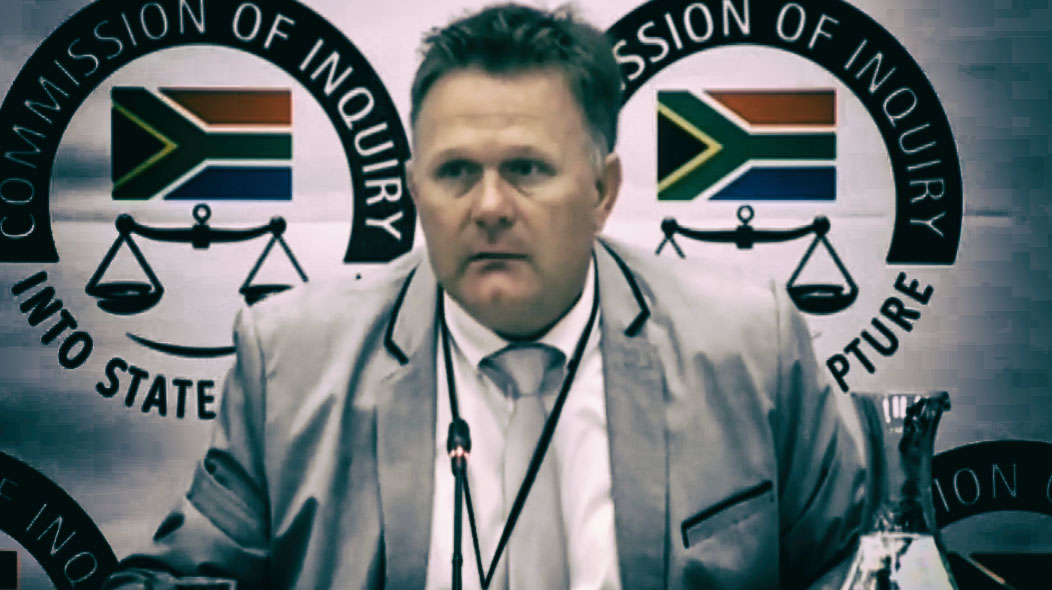 Deputy Chief Justice Raymond Zondo, chair of the commission of inquiry into State Capture, was urged to invoke his powers to compel those implicated in the Eskom scandal to provide a written response to allegations against them. (Photo by Gallo Images / Netwerk24 / Felix Dlangamandla)

The Guptas, McKinsey & Co, Regiments Capital and Trillian Capital Partners, along with their former Eskom enablers, are back in the spotlight as the State Capture commission shifts attention to their deals with the power utility — and this time, with the threat of subpoenas and summons to extract versions from implicated parties.

Bald denials, obfuscation and convenient silence may no longer be an option for those implicated at the State Capture commission of inquiry.

For the first time, on Wednesday, commission chairman Deputy Chief Justice Raymond Zondo was urged to invoke his powers to compel those implicated in the Eskom scandal to provide a written response to allegations against them.

Until now, few have taken the initiative to put up a version and Maleka said it was time for the commission to obtain a balanced view of the allegations and counter-allegations.

“We will in due course identify by name or number those implicated parties and in those cases we intend asking the judge to invoke that power to compel them to respond.”

Justice Zondo remarked that there was no need to wait until this round of evidence was concluded before approaching him for those subpoenas.

While deliberately withholding names on day one of the Eskom leg, Maleka outlined enough of a battle plan for the next few weeks that put the names of former Eskom executives Brian Molefe, Anoj Singh and Matshela Koko firmly at the centre of the upcoming hearings.

With the exception of former finance minister Trevor Manuel’s testimony about an alleged Gupta link to the appointment of Fikile Mbalula to Cabinet, the commission will focus extensively on Eskom until mid-March.

“There has been a variety of responses from such persons, some have become whistle-blowers, ongoing engagement with the commission, some have professed co-operation (not sure if feigned or real). Some have just denied and they will clearly be primary candidates for the invocation of the judge’s powers,” Maleka said.

The paper trail of initial evidence

Maleka introduced into the record a synopsis of 12 separate investigative reports and analysis documents that are set to form a crucial backdrop against which the commission’s legal team will tackle the Eskom case.

The documents relate to historical electricity crises and warnings, and the need for intervention as far back as 2008, that appear to have been ignored, as well as detailed forensic investigations into McKinsey and Trillian’s Eskom deals.

Some of those documents cover the Gupta heist of Optimum Coal Mine from Glencore in 2015, in a deal executed with unprecedented and allegedly unlawful levels of assistance to the buyer, the Gupta-owned Tegeta Resources. This included the issuing of an Eskom guarantee of R1.6-billion to help secure finance for the deal, a R600-million pre-payment for coal to cover a shortfall in the purchase price, and a radically reduced penalty from R2.1-billion to just short of R600-million once the asset was in Gupta’s hands.

The stack of reports submitted, varying in status and usefulness, include the Public Protector’s State of Capture Report; one by the parliamentary portfolio committee on Public Enterprises into Eskom and Transnet; a forensic report by Fundudzi Forensic Specialists into irregularities and maladministration at Eskom, another by law firm Cliffe Dekker Hofmeyr into deals awarded to a company boasting Koko’s stepdaughter as a director, yet another by law firm Bowman Gilfillan involving payments to Trillian, the Budlender report commissioned by former Trillian chairman Tokyo Sexwale, the G9 report into Eskom payments to Trillian as well as a draft report by international law firm Dentons into the management of the parastatal in 2015.

These documents all contain evidence, some of which will have to be further examined and boosted by the findings of the commission’s own investigations, into the various Gupta-linked deals.

The devil’s in the detail

While the introduction of the swathe of reports, much of which has had major attention in the press in the run-up to the State Capture inquiry, appeared like a soft launch for this phase of the commission, they make for a consolidated picture of years of malfeasance at the country’s power utility.

And the devil’s in the detail of fresh evidence unearthed as the commission conducted its own investigations into their findings, and gaps, to get to the truth.

Maleka said the commission will hear evidence of alleged money laundering and reports to the Financial Intelligence Centre through Standard Bank witness Ian Sinton. This, he said, relates to payments from Eskom to McKinsey and Trillian and the money flows beyond them.

This “will reveal the movements of funds from some of the entities who purportedly provided professional services to Eskom and Transnet”.

Standard Bank, Maleka said, had raised concerns around those accounts and asked for explanations which, once in hand, were found to be insufficient.

“That’s when the bank filed suspicious transaction reports with the FIC and cancelled some of the accounts.”

The bank’s evidence, Maleka said, is important in showing how money made from state-owned enterprises was “laundered”.

Global consulting firm McKinsey will have to explain why it was paid R1-billion in fees from Eskom in view of the questions around the validity of its deals with the parastatal.

“Did they have a BEE relationship with Trillian Management Consulting or Trillian Capital Partners?”

Trillian was McKinsey’s off-grid supplier development partner and raked in about R600-million in payments from Eskom without any contract.

Said Maleka: “We have had meetings with McKinsey, we have invited them… and they have undertaken to provide a statement. If not forthcoming, then we will ask the judge to force them.”

This is despite McKinsey having paid back nearly R1-billion in fees because it didn’t want to be seen to have benefited from “tainted” cash, and a Pretoria High Court application by Eskom to set aside all administrative decisions that had led to payments to both McKinsey and Trillian.

That matter is scheduled to be heard in March 2019. Trillian, at the last check, was challenging that application.

Then, said Maleka, a cyber expert will assist the commission to examine email trails that implicate Eskom executives for sharing confidential information with external third parties. Other emails, which are set to reveal more proof of cryptic requests for payments between two senior Eskom executives at the time, will also be presented by a cyber expert.

It was previously suggested that the email accounts of the two executives (Maleka did not provide names, but it is understood to be between Molefe and Singh) had been hacked but, said Maleka: “We now have further evidence.” This, he said, includes evidence that there was never a police case registered for the alleged hacking incident.

In addition, the now notorious email address, [email protected], through which several Eskom executives copied on confidential Eskom information, will also come under scrutiny in view of additional evidence.

And some gaps in the investigation into Koko’s alleged conflict of interest, relating to Eskom deals awarded to a company that involved his stepdaughter, will also be tackled by the commission, Maleka said.

The last of the 12 reports is scheduled to be presented on Thursday and Friday. Eskom chairman Jabu Mabuza is set to step into the witness box to testify, among other things, about what Eskom’s “clean-up board” found upon arrival in 2018, and what they have since done to reverse the effects of years of damage at this important state-owned enterprise.

The Eskom phase of the inquiry is being prioritised given the importance of this parastatal in the country’s economy and the size of its spending power, Maleka said.

Among the reports handed in was that relating to a 2008 investigation by the National Energy Regulator of SA (Nersa) into a devastating spell of load shedding in late 2007/early 2008 that had cost the country about R50-billion.

Back then, there were a total of 23 outages over the course of three months, the worst on 24 January 2008.

As far back as that, Nersa recommended a range of measures, including that Eskom prioritises corrective measures to avoid such a crisis.

Maleka said a 2015 report by law firm Dentons appeared to indicate that very little had been done after those Nersa recommendations.

Dentons had been commissioned by Eskom sometime in 2015 to conduct an investigation into the cost and factors affecting primary energy after the devastating blackouts of 2007/2008.

However, the investigation was later abruptly stopped after the firm handed the then Eskom board a draft report covering only work done to the midway point of its initial mandate.

Dentons had been stopped in its tracks after handing the board, then chaired by Ben Ngubane, a draft report containing the names of coal suppliers by volume and price with the start and end dates of supply agreements. The report had gathered dust until it was leaked to Financial Mail in 2017. DM

The commission resumes on Thursday with an introductory presentation of the findings and gaps in the investigation by the parliamentary portfolio committee on Eskom.