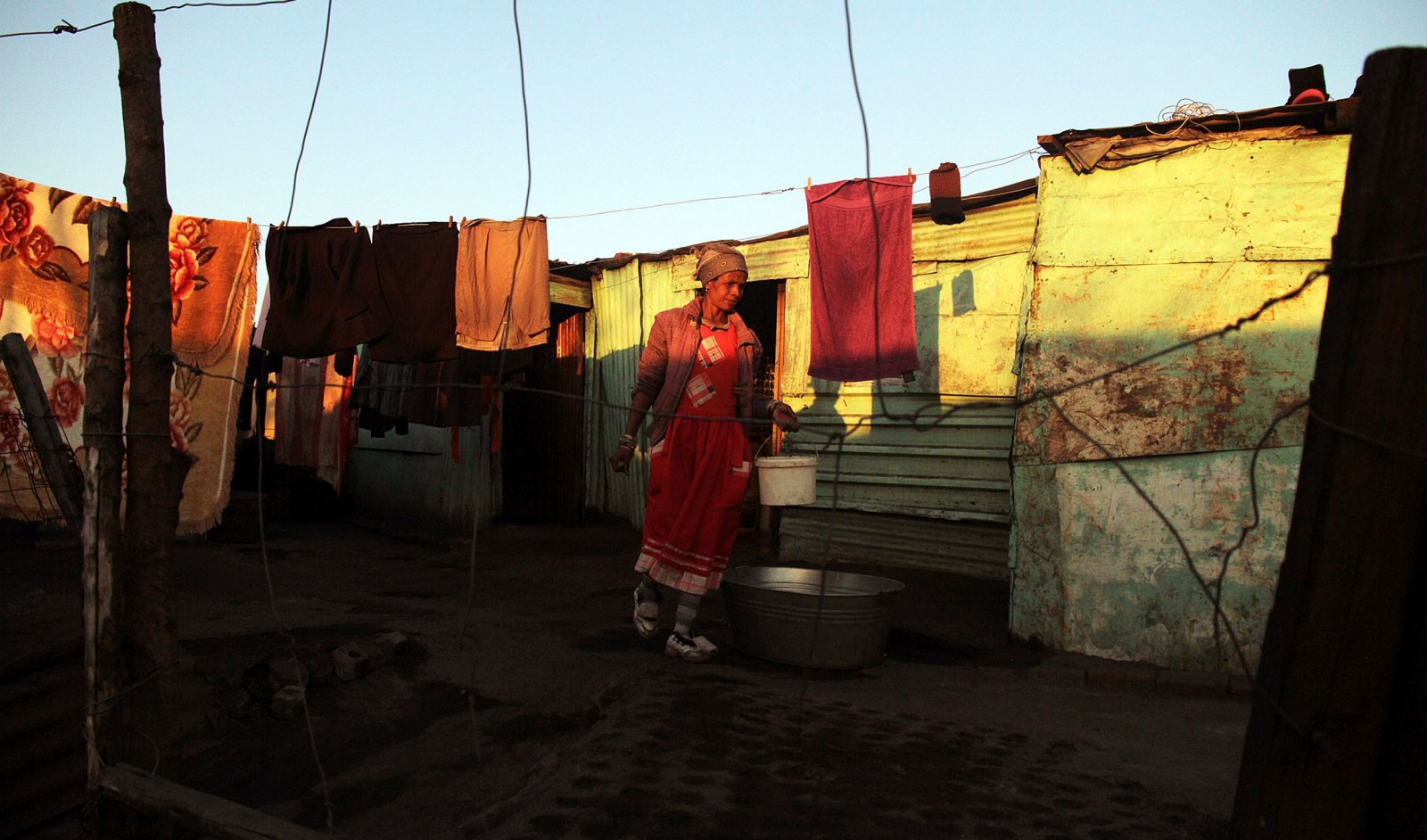 Harriet Ludidi on February 26, 2013, in Soweto, South Africa. Harriet, an unemployed mother of five, makes her own coal from clay and combusible black coal dust from a train station near her home. The coal is used for cooking, boiling water and heating. (Photo by Gallo Images / The Times / Moeletsi Mabe)

It is remarkable that South Africa’s social security laws are still based on the pre-1994 Social Assistance Act, with tweaks. These laws were aimed at the well-being of white South Africans in the context of virtual full employment for white men. They do not accommodate the lifelong income poverty of millions marginalised from decent work.

The catch is that destitution or poverty, while it may be distressing, is not distress, as defined in the act. If you are poor, you are not distressed, but destitute. And for that state of being, there is no income support.

Many might have forgotten the tireless dedication with which many hundreds of laws on the apartheid statute books were interrogated and rewritten in line with our Constitution after 1994. New institutions of democracy were introduced, others were given a make-over, with varying degrees of success.

We approach the sixth administration of our young country assured that the inequities of influx control, Group Areas, and the Immorality Act will never be known by our children. Nor will the detentions, bannings and killings that were used to try to destroy opposition to the apartheid plan of racial extractive capitalism — and yet, tragically, the social security laws were not.

And as a result of these historic apartheid inequities (and aggravated by some of the current choices made by our leaders), the inequality in South Africa is staggering. We rank as the most unequal country in the world. Period. It is not that we don’t have the money — we are proudly an upper-middle income country — but how it is distributed continues to win us this inequality ranking.

Many laws and policies have been adopted since 1994 aimed at eradicating the injustices of the past. Successive Budgets have allocated monies to the social wage — education, healthcare and housing — in ways unthinkable 26 years ago, but what is disturbing is the sense that decision-makers are not able to comprehend the depth of the horror of poverty and inequality that exist beyond the multi-hued cocoons of sufficiency, abundance and perverse opulence that monopolise the optics of democracy.

A prime example lies in the allocation of social security — or social grants as they are better known by those who need to know about them. The right to social income is guaranteed to all by the Constitution, as entrenched as the right to healthcare, housing, water — and food. But there is no legislated provision for access to social income for poor working-age people, given the fact that the legislation was based on the assumption that apartheid policies virtually guaranteed full employment for the white male breadwinner (with short spells of possible unemployment funded by the Unemployment Insurance Fund).

One frequently hears the statement that social grants dissuade people from working and create dependency. This is itself a bit odd as, last time I checked, children and pensioners were not meant to be working. What these naysayers mean to say, however, is that if you give grants to (poor) working-age people, these people will clearly choose to survive on grant income rather than work. In short, naysayers believe people are not currently unemployed because they are lazy, or enjoy starving.

People are not working because there are not sufficient jobs for them. Effectively, roughly 25 million people in the labour force (between the ages of 15 and 59) are either unemployed or employed in the precarious informal economy. And herein lies the rub.

The deliberate destruction of the peasantry in South Africa under colonialism and apartheid is well documented. Subsistence and income- producing assets of black people were targeted to make young men dependent of waged labour through tax and dog taxes to guarantee cheap labour for the newly industrialising South Africa.

The colonial and apartheid governments very deliberately and with great brutality took away people’s lands, their livelihoods and criminalised people’s attempts to accumulate assets. In short, the only income-producing asset the majority of people were left with was their labour, their ability to earn a wage through their physical and mental toil. And yet, given the current levels of unemployment, this country denies them the ability to do this.

So, back to the question of distress and destitution, and the ghosts of things past. Shaped by the certainty of full white male employment, the Social Assistance Act provides access to a temporary social cash grant known as the Social Relief of Distress (SROD) grant. This is often confused (understandably) with the emergency relief administered by provincial governments for people surviving fires and floods of the same name, but it is different, with a national rather than provincial budget line.

SROD provides aid for three months, and in extreme cases, it can be extended for another three months. The objective is to meet the survival needs of people who are in distress and cannot meet these needs on their own. The catch, however, is that destitution or poverty, while it may be distressing, is not distress, as defined in the act.

While this may appear an amusing semantic twist, in essence, distress is when you no longer have access to the bread of the breadwinner as a result of his (or her) having lost their jobs or having been imprisoned. In other words, distress must be the result of a particular incident that is responsible for the termination or interruption of your income stream. Not having an income stream does not qualify you. If you are poor, you are not distressed, but destitute. And for that state of being, there is no income support.

Of immediate interest is the release of the Budget documents just hours ago that shows that SROD constitutes just 0.3% of total social assistance spend, and that SROD expenditure is projected to grow by a negative 0.2% over the current three-year period, following a previous negative 0.2% expenditure growth in the last Medium Term Expenditure Framework period. As poverty deepens and unemployment rises, so the planned budget for the only social assistance, however temporary, for poor working-age people declines?

Our view can be distracted from the real challenges that face our government, but it should not be. The new administration can and should rise above this, and deal with structural poverty and inequality.

The easiest way to do this would be to guarantee a monthly cash grant — a Basic Income Grant. A universal Basic Income Grant is being piloted by many countries that are not in the poverty and inequality crisis that we are. Providing cash to people who cannot earn their own will stimulate local demand.

It is the essence of what Oxfam suggests in its 2019 Inequality Report recently released at Davos. It is an immediate commitment to reducing poverty and inequality in our country.

It is the right thing to do. DM

Isobel Frye is the Executive Director of Studies in Poverty and Inequality Institute, which is a member of the Budget Justice Coalition.