Lions, tigers and bears: Wildlife trafficking in the age of globalisation 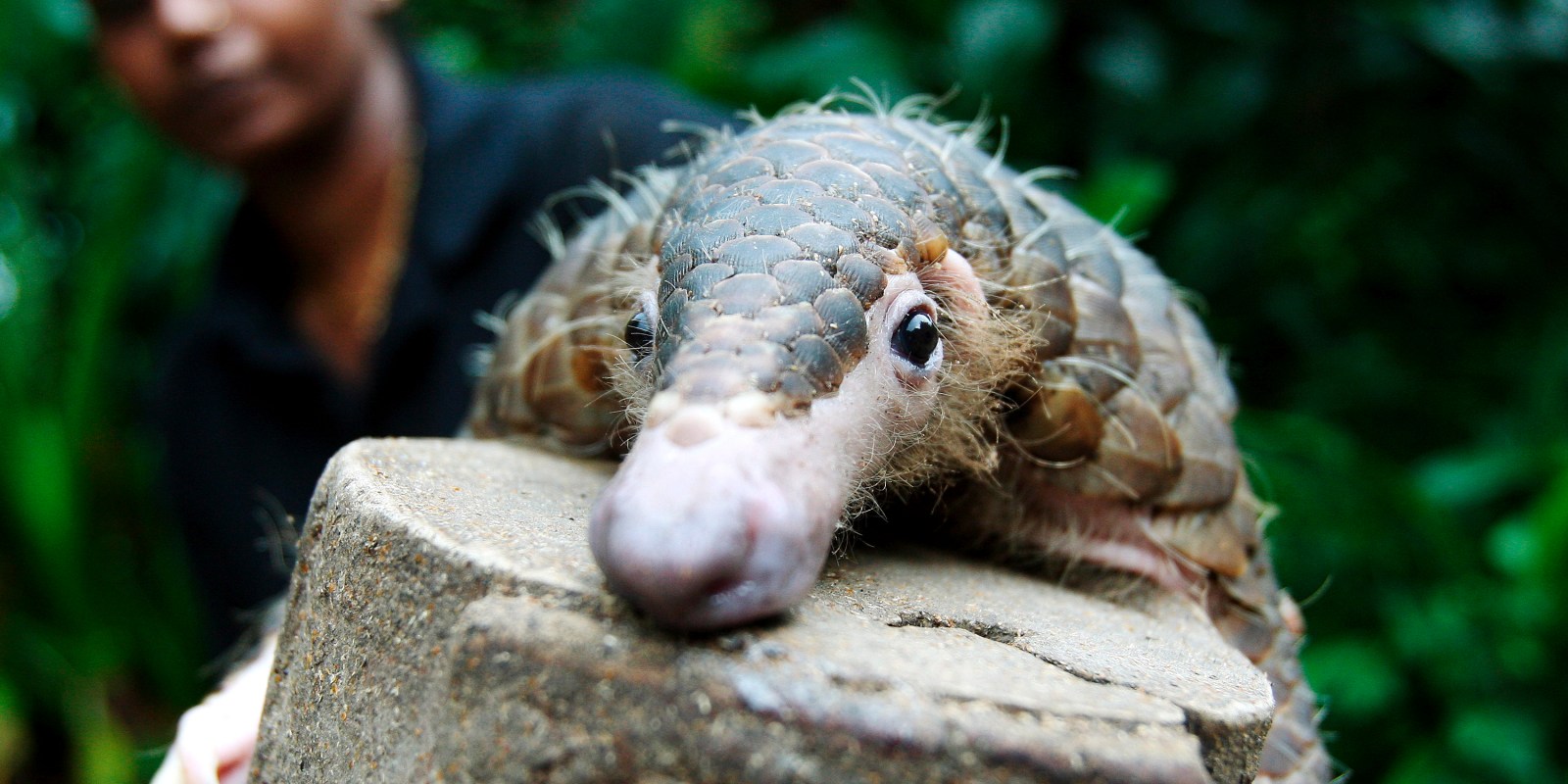 A picture made available on 30 June of Hook the pangolin resting on a tree stump while zoo keeper Suman looks on in the Singapore Zoo, 29 June 2008. EPA/HOW HWEE YOUNG

Trafficking of wildlife is big business and big money. As transnational trafficking networks continue to exploit endangered species to the point of near extinction, it is time to get serious about wildlife crime. Organised criminals have built their business model around those who poach and those who move illicit shipments across borders. Wildlife crime is therefore much more than a conservation problem, and until it is addressed from every angle, the trade will continue.

World Pangolin Day on 16 February was overshadowed by record-size seizures in the weeks leading up to it. In mid-January, Hong Kong seized more than eight tonnes of pangolin scales and nearly two tonnes of ivory. Two weeks later, Ugandan authorities seized 762 pieces of ivory and 423 kilograms of pangolin scales bound for Vietnam.

Just a few days later, a shipment of close to 30 metric tonnes of both dead and live pangolins, pangolin scales and pangolin meat was seized in Malaysia. The shipment also included two legs of a sun bear. The seizure in Hong Kong alone would have been supplied by hundreds of elephants and thousands of pangolins. All of these animals were illegally poached and trafficked by transnational organised criminal networks.

Pangolins and elephants, along with other species such as rhinos and gorillas, are all listed on Appendix I, which means that as soon as a shipment crosses a country border it is in contravention of CITES. However, as the latest seizures and many before them show, the international trade ban is of little deterrent value if it cannot be enforced. It is also each sovereign state’s prerogative to decide whether they will continue to allow domestic trade in such species, which means that traded animals must come from within their own country and remain there. Legal domestic trade in parallel with illegal international trade continues to create confusion and fuel demand.

Global networks – from Africa to Asia

African states serve as both a supplier and transit zone for various illicit wildlife products destined to satisfy Asian demand. Ivory carvings make for sought after art, while rhino horn and pangolin scales are used for its supposed medicinal qualities. Pangolin meat is also considered a delicacy in countries like Vietnam and China.

Wildlife shipments often transit through a number of States before and after crossing the Indian Ocean to its end-destination. For example, the recent Ugandan seizure is reported to have originated in the DRC, crossed into South Sudan and then entered Uganda. Considering the size of the seizure, it was likely destined for container shipment, possibly from a large port in Kenya or Tanzania, where the majority of ivory leaving the continent is also moved from. Upon reaching Asia it is likely to be transhipped a few times more before reaching its final destination.

With the number of countries exploited and the complicated logistics of a single shipment, it is easy to see how challenging a trafficking network can be to penetrate from poacher to transporter, to middleman, to corrupt customs agent, to those calling the shots. It is unlikely that only a few individuals are organising and operating such large scale operations, making clamping down on these networks exceptionally hard. And for every low-level trafficker who ends up in jail, ten are waiting to take his or her place.

Demand, supply and everything in between

Combating organised criminal networks’ operations requires an in-depth understanding of how best to counter the drivers of supply and demand, as well as what facilitates the movement of shipments. CITES has identified three key indicators of poaching activity – at the local level it is poverty, at the national level it is weak governance and corruption and at the global level, it is demand. While supply reduction and law enforcement can suppress a market, the only way to eliminate the trade is for demand to go down. However, providing alternative livelihoods for poachers and changing the way consumers think about a commodity is much harder than changing laws and stepping up law enforcement, which is why increased law enforcement measures are currently the go-to response.

The reality is that we live in a world where many view wildlife as something not worthy of their respect, it is merely there to be consumed or to serve as a source of income. And until that changes, the primary focus will remain on law enforcement efforts aimed at preventing poaching and the movement of illicit shipments. These efforts are however complicated by the mere scale of the problem, as well as the transnational nature of wildlife trafficking and the very successful business model which is intertwined with licit world trade. The volume of containers passing through borders and ports every day makes detecting illicit shipment exceptionally hard.

While countries being exploited by poachers and traffickers often read like the who’s who of fragile states – South Sudan, the DRC, Myanmar – it also includes states whose institutions are considered to be relatively capable, such as China and South Africa. What then could be the common denominator in these countries? While law enforcement can go a long way to prevent poaching and trafficking, it can easily be subverted by corruption. Risk profiling and container scanning by customs are often luxuries in countries where wildlife is being trafficked and where such measures are in place, customs officials are often bribed to turn a blind eye.

The same goes for under-paid rangers and policemen and greedy high-level politicians. A counter-response could arguably focus only on anti-corruption measures and enjoy great success. But again, this will be much harder than it sounds, especially in countries with very low capacity, resources and penalties, and a culture of corruption.

When a crime is transnational, the counter-measures must be too. At the current rate of poaching and trafficking of so-called “protected” species, something is amiss. Creative and nuanced approaches to counter these activities are therefore necessary. An example of such a holistic response is the counter-piracy regime which was put in place when Somali piracy began threatening world trade and driving up the price of oil. Numerous piracy affected States, international organisations and private industry co-operated on various levels and managed to successfully suppress piracy in the Western Indian Ocean.

Of particular relevance to other forms of transnational organised crime is the inter-State cooperation between security and law enforcement forces, establishing of industry best practice, law reforms, a creation of an international prosecution model and, although only to a limited extent, development activities to improve the root causes of piracy on land.

As most large wildlife shipments are shipped via containers, the shipping, freight forwarding and transport industries have been left out of the conversation for far too long. Much can therefore also be learned from the private industry response and commitment to address Somali piracy. If a container, truck and vessel cannot be secured to move the illicit shipment, the business model will collapse.

A better understanding of the legalisation of certain wildlife products is needed. Although it is certainly not the answer for all species and is susceptible to exploitation, there are many arguments in favour thereof. If a trade will continue regardless of legality, is it better off being run by a cruel, profit-driven criminal network or by an entity which can ensure that it is run sustainably and that the funds are channelled to conservation?

The power of public pressure

Never underestimate the power of public pressure. Public pressure recently led to China postponing the lifting of their domestic ban on rhino horn trade. We live in a world which has never been more aware of the need to protect the environment and to use it in a sustainable way. We must all continue to press governments to take the annihilation of their species and the fight against corruption seriously. DM

Carina Bruwer is a PhD Student, Centre of Criminology, University of Cape Town.