Cape Town’s greatest challenge is to unite itself 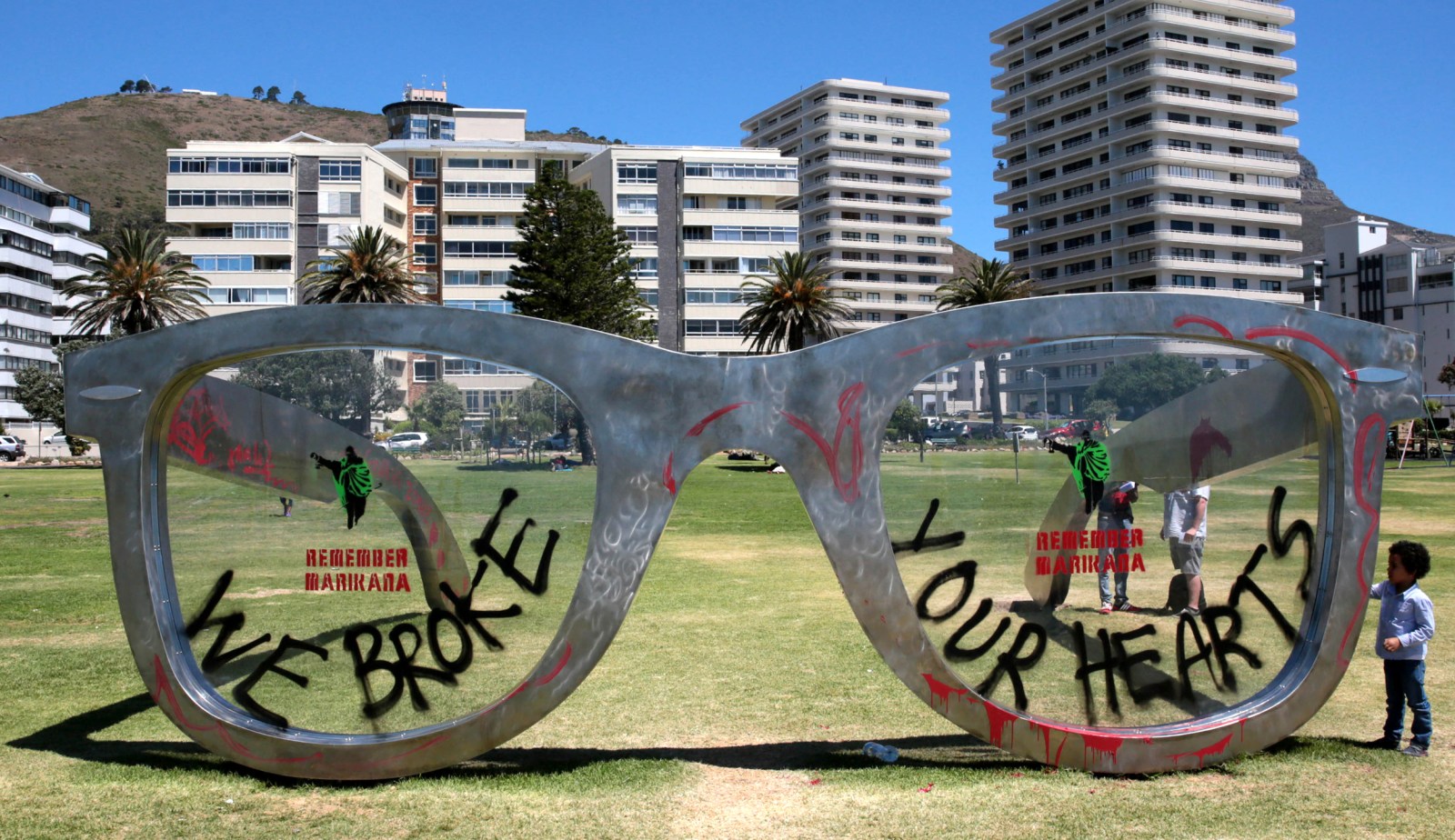 A boy stands next to the Nelson Mandela-inspired giant spectacles entitled Perceiving Freedom on Sea Point promenade after it was defaced with words such as "Remember Marikana" and "We broke your hearts" by guerilla graffiti artist group Tokolos Stencil Collective, an anonymous group of stencil and graffiti artists, activists and other concerned citizens in what they call "white supremacist corporatist art", Tuesday, 18 November 2014. Created by artist Michael Elion, in conjunction with the City of Cape Town as part of World Design Capital 2014, the art work is said to be a tribute to Mandela. Picture: Nardus Engelbrecht/SAPA

Cape Town’s inequality is often the first thing people notice. The drive from the airport takes you past shacks on the edge of the highway to the luxury apartments in the CBD. Inequality is in the bones of the city. And unless Cape Town’s worlds converge soon, it will hit a crisis point. Designing and implementing the policy to bring these worlds together has been dubbed Cape Town’s greatest challenge.

The foundations of Cape Town’s inequality were laid in the 1600s when Jan van Riebeeck and the Dutch East India Company (VOC) arrived at the Cape of Good Hope. They created a trade and slave-based economy under the name “Dutch Cape Colony”.

The landing of the settlers in the Cape initiated the inequality that would come to define South Africa’s governmental apparatus. The desire to create separate worlds within the city, deeply embedded in the planning process that the VOC, even suggested the development of a trench between the Liesbeeck and Salt rivers that ran from the city to False Bay, to mark the boundaries. The plan was vetoed by Jan van Riebeeck because of impracticality, but it set the tone for a city of separateness.i

Fast-forward 300 years – and the violent forced removals destroyed the vibrant close-knit communities that had burgeoned around the city. These began in the early 1900s when African residents were forced out of the city centre, to the infamous clearing of District 6 in 1966. Between 1957 and 1966, newly designated “white” areas drove over 100,000 coloured and Indian residents to settlements on the Cape Flats. This created new neighbourhoods along racial lines, a spatial pattern that remains largely intact today.

Interestingly, in 2012 Cape Town had the highest Gini coefficient across South African cities, and therefore, the lowest inequality. This may have changed in six years – glimpsed through the soaring property prices – but there’s something unusual happening when a country’s most equal city feels like its most unequal. Strides have been taken to improve access for all by the DA, through a 29,000-strong city administration, but inequality remains racially and spatially organised.

Today, Cape Town is seen as a DA stronghold. The ANC governed Cape Town from the turn of democracy until 2006, when it was lost to a DA-led coalition with Helen Zille as the mayor.

“I found myself with a fragile coalition, a hollowed-out middle management with no reporting mechanisms and a spider’s web of corruption”, revealed Zille, “so I had to look at Cape Town as a blank slate.”

In 2011, the DA campaigned on a platform of taking Cape Town “from patronage system to open society for all”,ii arguing that their policy was more inclusive and pro-poor than previous administrations. Efforts paid off with a 61% victory.iii

The DA has worked hard to build Cape Town’s reputation for bureaucratic excellence. Between 2011 and 2016, piped water access improved by close to 19%, the electricity went up by just over 23% and access to a formal dwelling (housing) by the same.

However, 2018 was not the DA’s year. Political infighting led the party to dismiss Patricia de Lille from DA, forcing her to resign as Mayor in October 2018. De Lille has since created a new party that will contest in the upcoming national elections, bringing into question the DA’s “stronghold” position and their ability to serve Cape Town’s poor.

Cape Town was confronted with a less than desirable inheritance. Where other cities face the challenge of the spontaneous development of inequality over time, in the post-apartheid era, Cape Town has had to work hard to undo the effects of legislated racism and inequality.

The project has met with mixed success. The DA, despite its flaws, has taken a fragile coalition to one of the best administrations in South Africa. Municipal, provincial and private sector actors have formed successful partnerships to build a dynamic and thriving economy, pushing Cape Town from “Slaapstad” to a services hub.

However, that may not be enough. The elections this May will show whether citizens truly believe that the DA can cut to the bone of Cape Town’s troubled inheritance. DM

Nchimunya Hamukoma leads research for the Brenthurst Foundation’s Future of African Cities series. Nicola Doyle is pursuing a Master’s in Development Studies at the University of Witwatersrand and is a former Brenthurst Foundation researcher. This piece is based on a longer discussion paper available at http://www.thebrenthurstfoundation.org.