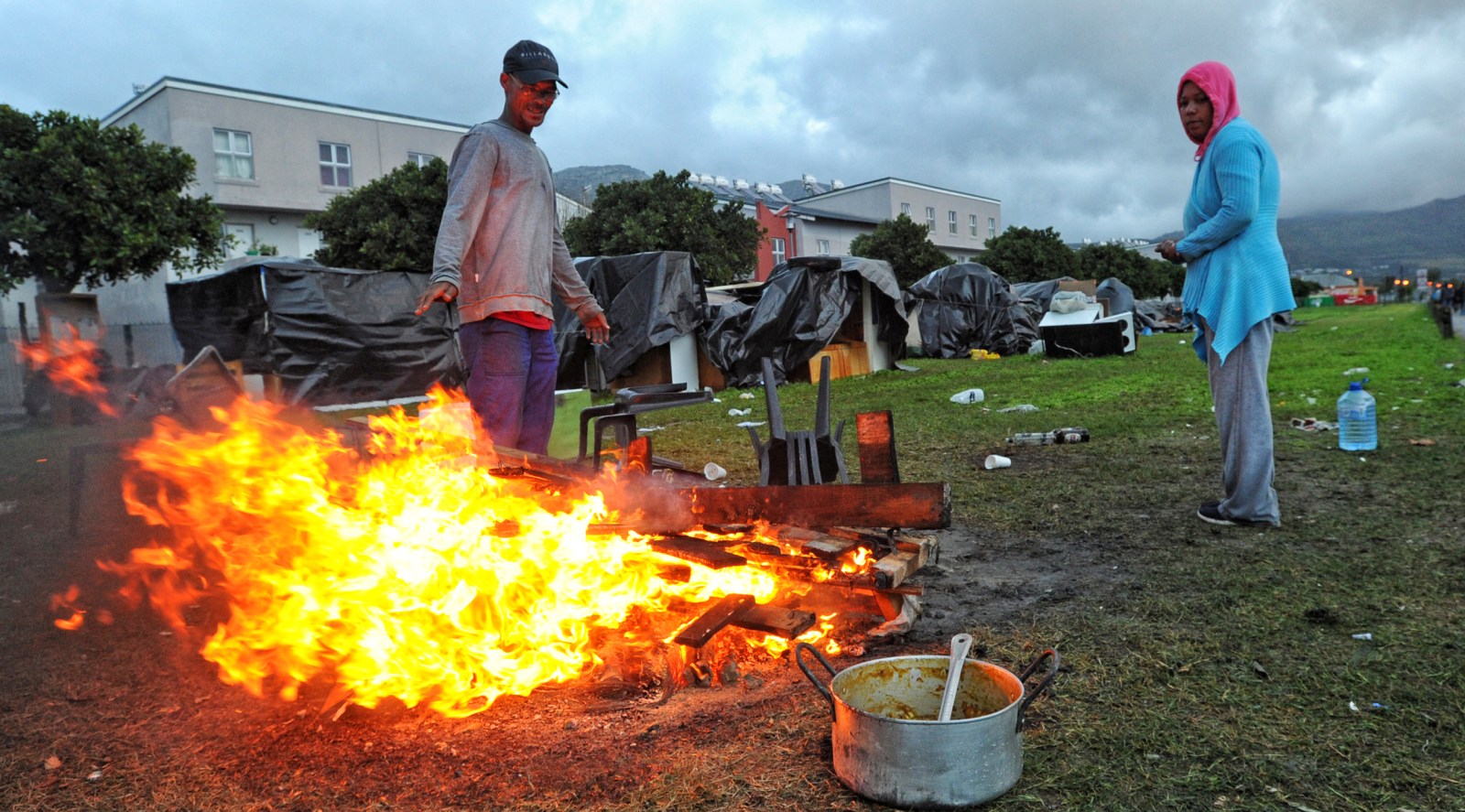 Steenvilla housing complex evictees have nowhere to go after they were evicted on June 07, 2018 in Steenburg, South Africa. (Photo by Gallo Images / Brenton Geach)

The United Nations Committee on Economic, Social and Cultural Rights has called for more inclusive economic policies and a review of fiscal policy to enable the government to meet its constitutional and international human rights obligations. But is Tito Mboweni willing to take a tip based on international law? Sadly, it seems unlikely.

It is a cruel quirk of history that 1948, the year when DF Malan and his cronies began ushering in a system of legalised racism in South Africa, was the same year the United Nations adopted the Universal Declaration of Human Rights. The declaration was a forward-looking document that imagined a world order where all human beings were regarded as being “born equal in dignity and rights”. Apartheid, by contrast, was a system that built walls rather than broke them down and which looked back to the heyday of colonialism — where white was right and freedom a privilege.

Not surprisingly, on that auspicious December day in Paris, South Africa was one of the few governments to abstain from voting for the declaration.

Seventy years later on 10 December 2018, South Africa joined the world in celebrating the 70th anniversary of the declaration. In his speech from Constitution Hill, President Ramaphosa pointed out that:

“This historic declaration, this manifestation of humanity’s common conscience, significantly influenced the development of South Africa’s constitutional order…”adding that “whether it is access to land or the provision of basic services, we have to give expression to the rights of our people as entrenched in our Bill of Rights.”

Ramaphosa was right to tip his hat to the declaration. One of the first fruits of our democracy was to tie South Africa back into a world of globally recognised human rights and international human rights law. Being part of this international community was an affirmation of our common humanity. In a sense, the declaration had taken our ancient philosophy of Ubuntu, which recognises the interdependence of people and communities, and embedded it on a global stage.

This was why in 1996 when we nailed down our aspirations to a tangible and enforceable Constitution (which Nelson Mandela deliberately signed on International Human Rights Day) we tied our destiny to a revolutionary idea: That when it comes to matters as universal as human rights there exists a set of laws even higher than our own, those of the Covenants of the United Nations.

In October 2018, in fulfilment of our duty to report on progress with implementation of the International Covenant, a high-level government delegation, led by Deputy Minister of Justice and Constitutional Development John Jeffrey, travelled to Geneva to participate in a review of our laws and practices against the rights and duties established by the International Covenant.

In their wake was a collection of social justice organisations, armed with more than two dozen “shadow reports” sans the gloss that governments always put on their own stories.

Sadly, unlike glitzy events such as the World Economic Forum in Davos, the hearings garnered no media interest, despite the release of statements by organisations that participated.

Yet what happened in Geneva was arguably of much greater significance.

Both government and civil society delegations engaged in a robust interrogation from the UN’s Committee on Economic, Social and Cultural Rights (UN Committee). The government told how its efforts were generally improving the conditions of the poorest in South Africa. Civil society offered hard statistics on everything from rising unemployment to the collapse of public health care and education systems as well as telling human tales describing how austerity policies were actually worsening the conditions of the poor.

The committee, which is made up of 18 experts elected by UN members, had to make its assessment based on these conflicting reports and on 12 October it issued what it termed politely its “concluding observations”.

Unfortunately, the media missed the significance of this too. Maybe news needs a pop star or a former president to get attention, or maybe human rights just aren’t newsworthy to the “mainstream” media.

The UN Committee welcomed the “constructive dialogue” as well as the input from civil society and the SA Human Rights Commission. However, without wasting words, it then made recommendations under 32 different sub-headings. Many of its findings are explosive. For example, commenting on the state’s duty to allocate the “maximum of its available resources” to socio-economic rights (a duty we have ratified, remember), it said that while it:

“Welcomes the efforts pursued since the end of apartheid, the persistence of such inequalities signals that the model of economic development pursued by (South Africa) remains insufficiently inclusive.”

It went on, noting:

“The state party’s fiscal policy, particularly relating to personal and corporate income taxes, capital gains and transaction taxes, inheritance tax, and property tax, do not enable it to mobilise the resources needed to reduce such inequalities.”

The committee, therefore, recommended that South Africa “review its fiscal policy” and “re-examine its growth model in order to move towards a more inclusive growth pathway”.

On the vexed matter of the “austerity measures” currently being implemented by the government, it suggested an approach not dissimilar to that which the Constitutional Court has taken when presented with disputes over the government’s past failures to fulfil rights to housing and access to health care services. It “reminded” the state party:

“That, where austerity measures are unavoidable, they should be temporary, covering only the period of the crisis; necessary and proportionate; not result in discrimination and increased inequalities; and ensure that the rights of disadvantaged and marginalised individuals and groups are not disproportionately affected (all of which we are failing to do — my comment)”.

The committee recommends that the state party:

In terms of the UN Committee on Economic, Social and Cultural Rights, the government is expected to respond to these recommendations as well as to “disseminate them widely at all levels of society, including at national, provincial and municipal levels, in particular among parliamentarians, public officials and judicial authorities”.

One doubts that that has happened — has it, Deputy Minister Jeffrey?

Now, as the public braces itself for another round of austerity measures, the Minister of Finance, Tito Mboweni and the Cabinet must be reminded that the unholy trinity of Standard and Poor’s, Moody’s and Fitch — are not the only supra-national power whose hunger they have to satisfy.

Before Tito dismisses my tip and titters at the naivety of the organisations gathered under the umbrella of the Budget Justice Coalition, let me say that reasonable people recognise that our government has a nigh impossible task of balancing its books and meeting needs that have been denied over hundreds of years.

This is made harder by gross corruption, State Capture and corporate greed. Nonetheless, that difficulty aside, in balancing the books, our state cannot escape the fact that protecting human rights is one big rule of law we signed up to — for reasons given by President Ramaphosa.

My tip for Tito would be to acknowledge the UN’s recommendations and tell the nation that they will be seriously considered. When it comes to the parliamentary debate on the Budget, our MPs should do the same. Yet, my bet is that the UN’s findings will not get a mention in the Budget. One can only conclude then that when it comes to our economic policy, the human rights treaties ratified by Parliament are considered less important than the dictates of international finance and local capital.

This is not just bad for the people of South Africa, it is bad multilateralism and the idea of binding international norms and standards based on human rights.

So, while it was fitting that President Ramaphosa paid tribute to the declaration, the hypocrisy does make one wonder whether the nice words are more pomp than purpose — a mere lip-service to liberation from indignity and desperate poverty.

For these reasons the ordinary man and woman in the street who would benefit most from a government that respected universal human rights standards might be forgiven for thinking that the UN is just another elite club.

They could be forgiven too for seeing multilateral forums, be they the European Union or the UN, as nothing more than bloated bureaucracies that organise elite gatherings. But what we should not forgive ourselves for is adopting policies that by failing the poor assist the global turn towards nationalism and populism.

Once we had a dream! Turn back, Tito: South Africa still has the moral authority to set a different example for the world. But it starts with how we govern our own house and who we take our orders from. DM