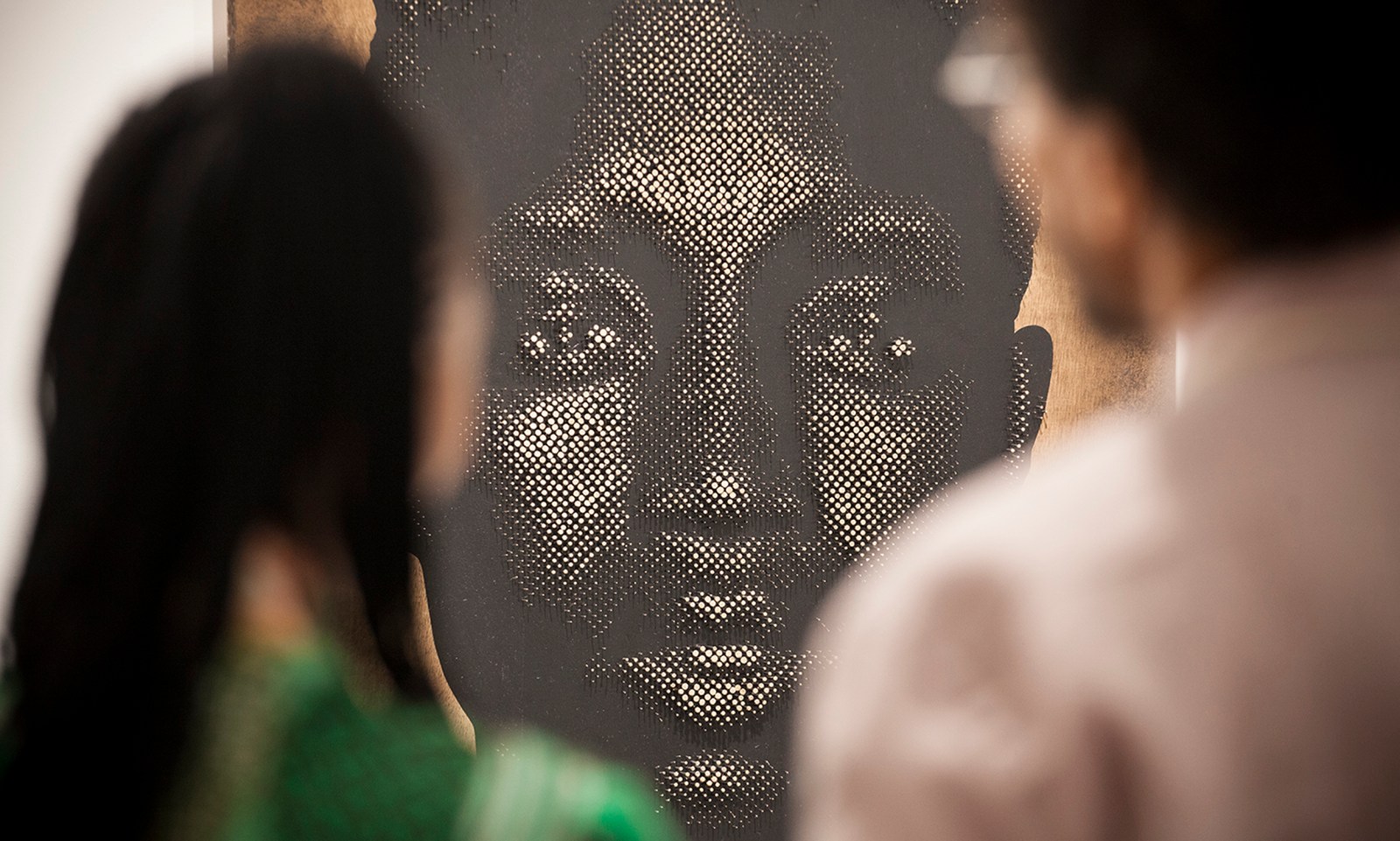 For its seventh edition, 108 galleries and collectives came from all corners of the world to present contemporary art at the Investec Cape Town Art Fair (ICTAF). There were extensive collections of art exhibited, from sculptures to video installations and paintings. Here is a small selection of some of the great artworks on display, the ones that were simply impossible to avoid.

Attending an art fair, and especially on opening night, can be overwhelming: a multitude of artworks, drawings, videos, sculptures, paintings, photographs, people and conversations come crashing into the air in an explosion of concepts, colours, structures and ideas. It’s a thunderstorm of emotions, a sort of sensory overload. The aim is to see, let the eye be surprised and the heart seduced, buy or reserve a piece (for those who can afford such investments) and discover artists, emerging or established, who are usually confined to the spartan walls of galleries around the world.

At this year’s ICTAF there were 10 more exhibitors than last year – a total of 108 galleries and collectives who paid between R1,500 and R2,400 per square meter for a booth to showcase their artists’ work. Set in the lower level of the Cape Town International Convention Centre, flanked by two entrances and traversed via many open corridors, the hall was a labyrinth of exploration. Walking through the booths, time seemed lost; Diana Vreeland, the late Vogue editor-in-chief and a special consultant at the Costume Institute of the Metropolitan Museum of Art, would have approved – oh, how the eye travelled indeed!

Rooted in his origins in Cameroon and his exploration of the world, the work of Pascale Marthine Tayou, exhibited at the Galleria Continua booth, caught the attention. His series dubbed “Poupées Pascale”, crystal glass figures picked with feathers, and adorned with beads, plastic flowers, straws and mixed materials were inspired by African sculptures, whose ornamentations depict social class, status and religion. In an interview with the Fowler Museum in 2014, Tayou said:

“This project is the continuation in my long journey toward the unknown, an initiatory process at the heart of contemporary rituals; ought I to believe or not believe?”

Dan Halter’s piece, The Child Who is not Embraced by the Village Will Burn It Down to Feel its Warmth, is comprised of “hand-woven archival ink-jet prints” so tiny it is impossible to read the words from afar. Only the title of the piece appeared, each word burnt into the fabric with what looked like the tip of a burning match. It was humbling to stand in front of Halter’s oeuvre: the proverb stood out, ominous yet compassionate; and when the eye approached, thousands of serif lines appeared, supporting and intensifying the burnt words.

Alexis Peskine uses hammers, nails and leaves of gold to create his art, in a unique technique called Accu-painting, inspired by, yes, acupuncture. The nails used by the artist give the portraits an illusion of movement and the depth of a 3D picture. Born in Paris, Peskine studied in America at Howard University in Washington. His work focuses on the impact of colonialism, black experience and identity.

Justin Dingwall is a fine-art photographer who, through powerful images, challenges the traditional idea of beauty. In his series, A Seat at the Table, he delivers a photographic essay about vitiligo that is both breathtaking and empowering. Dingwall said in an interview with Between10and5:

“The [images] are not about race or fashion, but about perception, and what we subjectively perceive as beautiful. I wanted to create a series of images that resonate with humanity and make people question what is beautiful.”

But a storm is blowing from Paradise, by South African artist Jake Michael Singer explores themes of “ascension and progress”. The sculptures are created using a similar technique to the one applied to roof thatching – the grouping of bunches of steel pieces that eventually form unexpected shapes, partly wings that symbolises transcendence, partly shields that expose vulnerability.

Ima Mfon is a Nigerian editorial and fine-art photographer based in Lagos who, through his series of close-up portraits, explores cultural identity. All his portraits are photographed and treated in the same way, the faces framed correspondingly, giving the series remarkable osmosis. In a way, it reminds one of the work by German-born and New York-based photographer, Martin Schoeller, renowned for his intimate close-up portraits of celebrities and ordinary people, using the same lighting, tone and crop for each and every picture.

Gonçalo Mabunda was born in Maputo, Mozambique, a country that was plagued by civil war from 1977 to 1992. The artist uses parts and pieces from weapons recovered after the war ended – AK47s, pistols, grenades – to create masks and powerful art that speaks both about the aching pain of the past and the transformative power of creativity and art. Weaponry that was used to destroy is changed into striking shapes that inspire reflection and spark conversations.