The Colour of Memory: The Stone, the Gun, and the Plate

The Colour of Memory: The Stone, the Gun, and the Plate 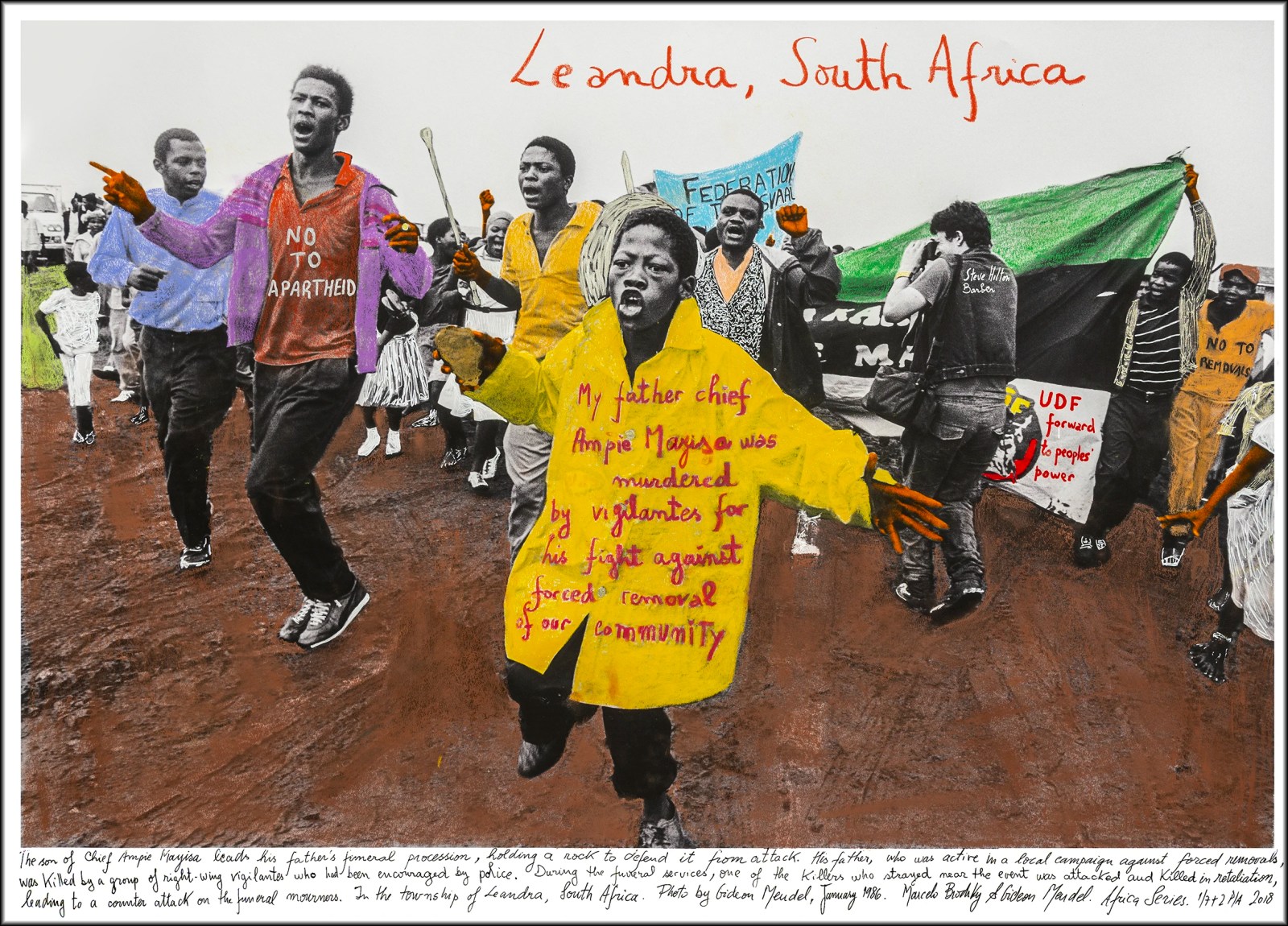 At the Cape Town Art Fair this weekend, a collaboration between a South African photographer and an Argentinian artist casts new light on the intersection of history, memory, and the iconic images that enshrine our stories.

A photograph, in the blink of an eye, is an open-and-shut case of history as it happens. A snap, like a snare, and there you are, transported to the heart of the moment, by an act of private witness that becomes a mark of public memory.

A soldier crawling through the surf in the bullet-flying blur of the landing on Omaha Beach. The wince of an executioner’s gunshot on a street in Saigon. A schoolboy’s lifeless body, borne like a Pietà, on a wintry day in Soweto.

The image enshrines the story, even if, deep down, we know that wider truths lie waiting just outside the frame.

But what if we were to take the sacred icon, the moment frozen in time, and scrub colour by hand onto its black-and-white canvas? What if we were to impose captions and slogans in crayon, like graffiti daubed on a wall?

The answers are to be found, or at least contemplated, in The Stone, the Gun, and the Plate, the first of a series of collaborative projects by the South African photographer, Gideon Mendel, and the Argentinian artist, Marcelo Brodsky, at the Cape Town Art Fair this weekend, 15 to 17 February.

The work is a giant triptych based on a series of photographs shot by Mendel in 1985 and 1986, in the frontline of the running battles that broke out between political activists, vigilantes, and police in the darkest hours before democracy.

In each image, stones are wielded as weapons, and each captures the anger, tension, and defiance that spilled in the wake of a funeral: violence begetting violence, death spiralling into death.

For Mendel, shooting for Agence France-Presse at the time, the images have reopened old wounds, pressing him to question the photographer’s role as documentarian and drafter of history.

“I’m very aware that I’m part of a long line of mostly white, male, and Jewish photographers who were fascinated by black poverty,” he says, reflecting on the era of mainstream news photography that was later immortalised, and to some extent romanticised, in the Hollywood movie, The Bang Bang Club.

“I’ve been thinking a lot about the ethics of what we were doing, appropriating moments in people’s lives. What photography does is give you a licence to be present in situations of pain and trauma.”

That licence, adds Mendel, obliges the photographer to confront some uncomfortable questions about copyright, colonialism, and race, including: who among us can truly lay claim to the image? The photographer? The viewer? How about the subject?

“We need to challenge ourselves and our practice,” he says.

In the process of “re-reading and reactivating” his images from the 1980s, for his projects with Brodsky, Mendel has become acutely aware that the work he was doing was a product of his privilege. At the time, as a documentarian, he was caught up in the intensity of the fleeting moment; now, turning his focus inward, he finds himself grappling with bigger questions of power relations and access.

“Looking back on my contact sheets, I’m astonished that I could just be there, walking through a poor area or a squatter camp, without any questions about who I was and what I was doing there. People would allow me to photograph their lives in quite intimate ways.”

He wonders, too, to what extent his presence endangered those around him, in situations of violent confrontation. “I was a very instinctual photographer, I was quick, I was fast on my feet,” he says.

“A lot of the news photographers used to go around with these huge long lenses that put them far away from things. My style was to use wide-angle lenses, right in the middle of things. I used to drive the other photographers crazy, because I’d be in their pictures.”

Mendel’s body of work, which encompasses the brutality of apartheid, the debilitating effects of HIV/AIDS, and the aftermath of floods around the world, is shot through with physical and psychological conflict, but so too is the viewer presented with the steely resilience and grace of compassion that make us human.

In Marcelo Brodsky, who he met at a group show in Brussels, he found a kindred spirit, a man who grappled with his own pain and trauma during the “Dirty War” of 1974 to 1983, when the Argentinian military junta kidnapped thousands of dissidents, including his older brother Fernando, who to this day remains among the missing.

Brodsky asked Mendel if he could license some of his images for an ongoing series of colour-and-text “interventions”; Mendel was apprehensive at first, given his strong resistance to shooting in colour for AFP in the 1980s.

“I felt that black-and-white was so much more emotional and says so much more,” he recalls. Instead of simply allowing his images to be licensed for reuse, Mendel suggested a more active partnership, a creative collaboration between artist and photographer, between intersecting histories of oppression.

And so a new type of art has emerged, one that respects the integrity of the image while liberating it from its journalistic confines.

The use of crayon on cotton print — you can almost smell the scratchy, waxy texture — plunges the viewer into the innocence of childhood creativity, a sensation only enhanced by the loosely-flowing cursive captions that retell the story behind the moment.

“It’s not journalism any more,” says Brodsky. “It becomes art. It’s an interpretation of reality, a way of narrating history and conveying meaning to a new generation.”

As much as it feels new, though, the technique harkens back to the very genesis of photography, when artists would hand-tint ambrotypes — photographs etched on glass — to imbue them with a facade of reality.

Likewise, in the present day, we gleefully post-process our smartphone pics, layering them with filters and text and effects to make them stand out on the social networks. We are all photographers now, all interventionists, all tellers of stories.

Events that were once documented only by a handful of professionals on assignment are now captured from multiple angles, kaleidoscopically, in exploding fragments of reality.

“The value of traditional news photography has changed so much,” says Mendel.

“Situations are often overcrowded with photographers, but at the same time, they’re under-photographed. I don’t know if it’s because the world has become a less interesting place visually.”

Perhaps there is something else to it too. As you gaze at these photographs, these relics of a now distant past, a golden age in South African photojournalism, and you see the stones that are about to be cast, you get a glimpse of the truth that lies outside the frame.

A sense that history and memory will always be subject to change, reinvention, and reappraisal, because they are never cast in stone. DM

The Stone, the Gun, and the Plate will be on display by the ARTCO Gallery in booth E5 at the Cape Town Art Fair, from 15 to 17 February, at the Cape Town International Convention Centre. It will also be shown at the Apartheid Museum in Johannesburg, coinciding with Gideon Mendel’s photographic exhibition, “Damage”, which opens on March 30.