Caramel & Char: Fire burns its way back into chefs’ favour 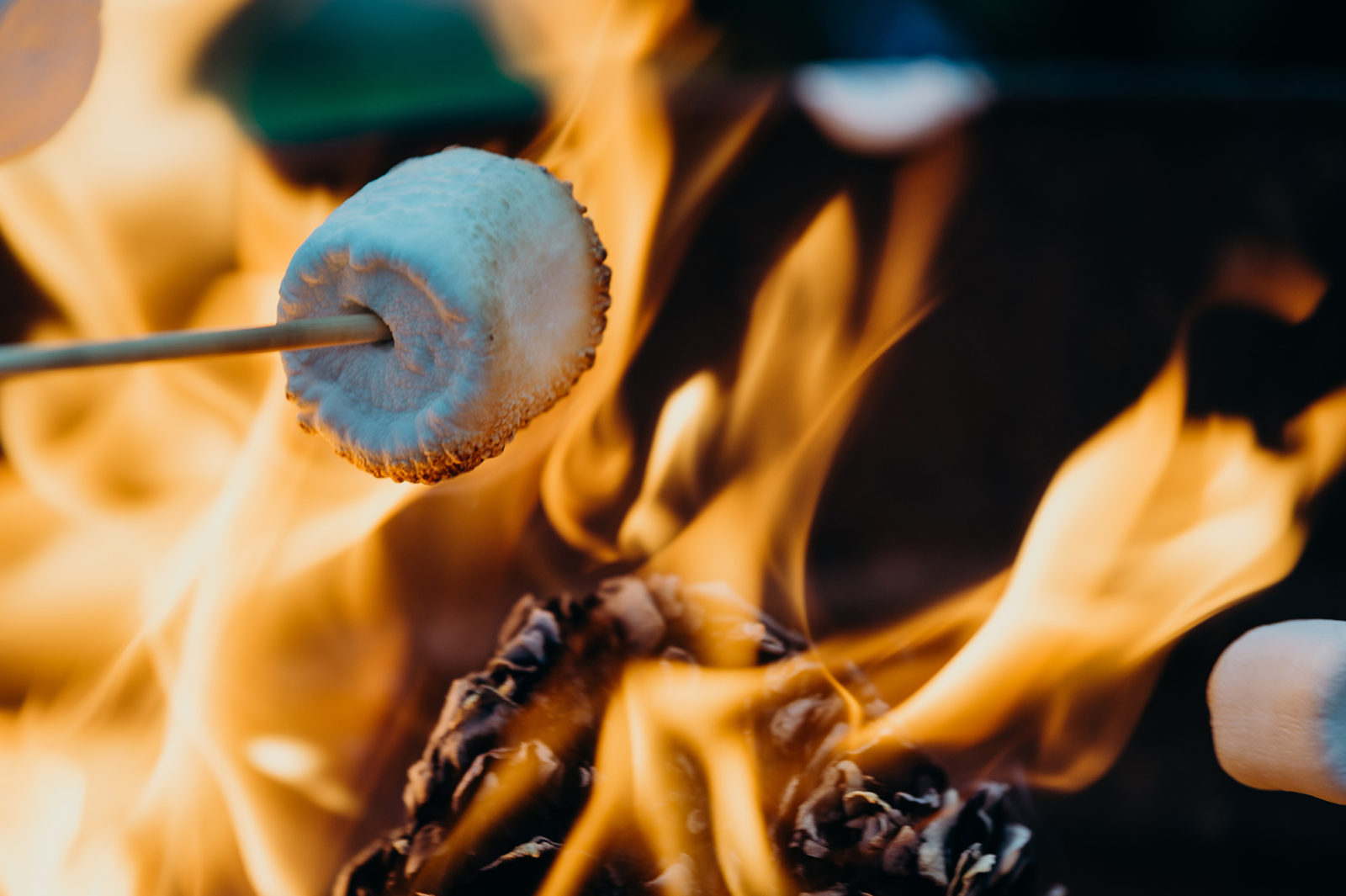 Image by Leon Contreras on Unsplash

It’s the thing that most of us remember from childhood. The thing that happens when you skewer a marshmallow, hold it over the flame, and watch as filigreed rivulets of caramel run all over its surface like strands of golden gossamer. It’s the char. The singe. The flavour burst on your palate.

It’s the sugar that’s burning. Ever since our ancestors first lit a fire and spent hours staring into it, mesmerised, minds wandering, the flickering, folding and unfolding flames of a fire have been at the core of our psyche and sense of well-being. Our sense of being alive; a mysterious bond between mind and Universe. It’s as essential to us as water and air.

When I was that kid with a skewered marshmallow over what remained of the braai fire, what had come before had involved two of my other favourite things, and they remain favourites. We used to put big, fat potatoes in the coals and cover them with more coals. All you saw was a mound of orange coals. Foil? Who said anything about foil? Nope – the bare potatoes, right in there. The outer skin would slowly turn into a hard, blackened shell. When you cut through it, it would fall apart to reveal sensuously soft off-whiteness. I’d criss-cross it with a fork, lob in a nob or two of butter, sprinkle it with salt, and munch the whole thing. The crunch of the blackened crust combined with the buttery, soft flesh is still the best potato recipe I know. This from a man who loves potatoes any way (my mom’s favourite meal was mashed potato), whether chips made my mother’s way, fondant potatoes, a creamy, herbed potato bake, or potatoes roasted in duck fat for Christmas.

The other thing that had been consumed with gusto before the golden-singed marshmallows was a lamb chop or two with charred fat – it has to be richly dark, almost burnt, so that much of the fat itself has dripped away onto the coals below. This is why a chop on the braai is the best. If I see somebody cut off the fat and discard it, because fat is supposedly “bad for you”, I cringe. What a senseless waste.

The other thing that makes me roll my eyes at the braai side is the unfathomable habit of so many men of pouring half of their beer on to the fire the second any flame flickers up. There are two things wrong with this: you’ve gone to all that trouble of building up hot coals … right? And, you’ve spent good money on that beer to drink it, and you’ve just poured half of it in the fire. Sooooo… or is it just me?

In fact, that flame is good, it gives meat a punch of flavour and crunch, and I am thrilled with the current trend (even though I despise trends) towards charring, even burning, food. Not just meat. Not just marshmallows, or even just potatoes. Pretty much anything. Not that it’s truly about burning – it’s about that fine distinction between something that’s charred, and therefore enhanced, or burnt, and therefore bitter to the palate.

When you’ve lived long enough, you know that today’s trend is tomorrow’s taboo, but also that today’s taboo will one day be suddenly new: “Have you heard about charring, darling? Everybody’s doing it!” (Um… isn’t that what we used to call burnt? Like, yesterday?) But chefs who embrace the “new” (hah!) technique of charring point out that there’s a difference between food that’s burned – that is, intentionally, and with control – and just burnt.

Well, here we have it. Top chefs, only two or three years ago, would tell you: “Don’t over-colour the onions – don’t let them burn! There’s too much char on that meat – do you want our customers to get cancer!?” Now? “Guys, where’s the char on that steak? Huh? That’s what gives it the umami, the voomah! And why are these onions so beige? Caramelise them, you great, big hairy %$#@!” (Sorry. Been in too many kitchens.)

Yes, chef! And somewhere in the corner of the kitchen there’ll be someone like me, in a small voice: But I did try to tell you… oh well. Sit by the river long enough and eventually your favourite forgotten cooking technique will come floating by.

Now, chefs are burning everything in sight, looking for what has been termed an “umami bomb”. Ask why this is somehow suddenly okay, when not too long ago you were told it would basically kill you, and much obfuscation will follow. It’s as if certain chefs have just got utterly fed up with their craft and innovation being suppressed by the annoyingly vague assertions that char on meat “may” increase the risk of cancer, and fearmongering about carcinogens being transferred directly from the steak into your stomach and that’s it, it’s all over, folks.

Now, I’m no Ivo Vegter, our resident Cynic-in-Chief, whose forensic investigation of this topic would be interesting to read and would doubtless throw up things I haven’t thought of. But the somewhat more timid cynic in me does suspect that the science behind such claims is suspect, or at least too limited to lay too much store by.

So, what the likes of a British tabloid – whose lifestyle editor has dispatched a reporter to do the annual story on the dangers of charred foods now that summer’s arrived – will do is write a story suggesting that it’s best not to char anything at all if you don’t want to die.

But maybe we should go to something mildly more authoritative, such as America’s National Cancer Institute, which falls under the US National Institutes of Health. On their website, asking themselves the question: “What evidence is there that HCAs (heterocyclic amines) and PAHs (polycyclic aromatic hydrocarbons) in cooked meats may increase cancer risk?” they reply: [my italics]

“Studies have shown that exposure to HCAs and PAHs can cause cancer in animal models. In many experiments, rodents fed a diet supplemented with HCAs developed tumours of the breast, colon, liver, skin, lung, prostate, and other organs. Rodents fed PAHs also developed cancers, including leukaemia and tumours of the gastrointestinal tract and lungs.”

So far, so frightening. Only, you and I are not rodents. We’re somewhat bigger. That’s one thing. Here’s another:

“However,” the US National Cancer Institute continues, “the doses of HCAs and PAHs used in these studies were very high — equivalent to thousands of times the doses that a person would consume in a normal diet.” [my italics]

So, chances are you’ll survive. Unless you eat the entire butchery, or hang around abattoirs sampling the wares. Given the apparently minuscule amount of those very long words you or I eat in our two little tjoppies at the braai, I reckon I’d put my money on us not all falling like flies during the night.

Caramel or char? Since we’re getting a tad scientific, the difference is sugar, whether added or a natural part of what you’re cooking. Add sufficient heat or flame to whatever it is, and it will either caramelise or char. The natural browning is a result of the Maillard Effect, a chemical reaction that occurs when the sugars in, say, a halved apple grilled flat-side down, or for that matter a steak – or, yes, that marshmallow on a stick over the coals – react to the heat. As Wikipedia describes it, it’s the amino acids reacting with the “reducing sugars” that “gives browned food its distinctive flavour”. Charring takes things further towards “burned” or blackened, without the necessity of sugars, and is “composed primarily of carbon” (Wikipedia), hence the scaremongering as described above. (So do be sensible about all this. I’m offering reasoned arguments, not exhorting you to burnt-fat-eat your way to death.)

As with anything we consume, the key would be to know how far to go. The chef needs to char without destroying the food. The braaimaster needs to keep a check on those flames, but not douse them with their beer. (Did I mention that?)

So, maybe chefs just decided, to hell with it. Literally, fire and brimstone, burning Hell. We’re gonna make them taste the burn. It’s caveman stuff – we’re just gonna do it, and to hell with the consequences.

Let’s just not go as far as the US restaurant that put a burnt dessert on its menu called “charcoalate”. Geddit, geddit? That’s about as bad as a cheffy pun gets.

And next time I braai, those potatoes are going right into the coals. Naked. DM

Tony Jackman is Daily Maverick’s Food Editor. His book, foodSTUFF (Human & Rousseau), a cookbook-cum-memoir with essays about life, food, living, family and even grieving and illustrated by 60 recipes, was nominated for the Gourmand World Cookbook Awards (2018) in the category for best food writing. Book enquiries: [email protected]