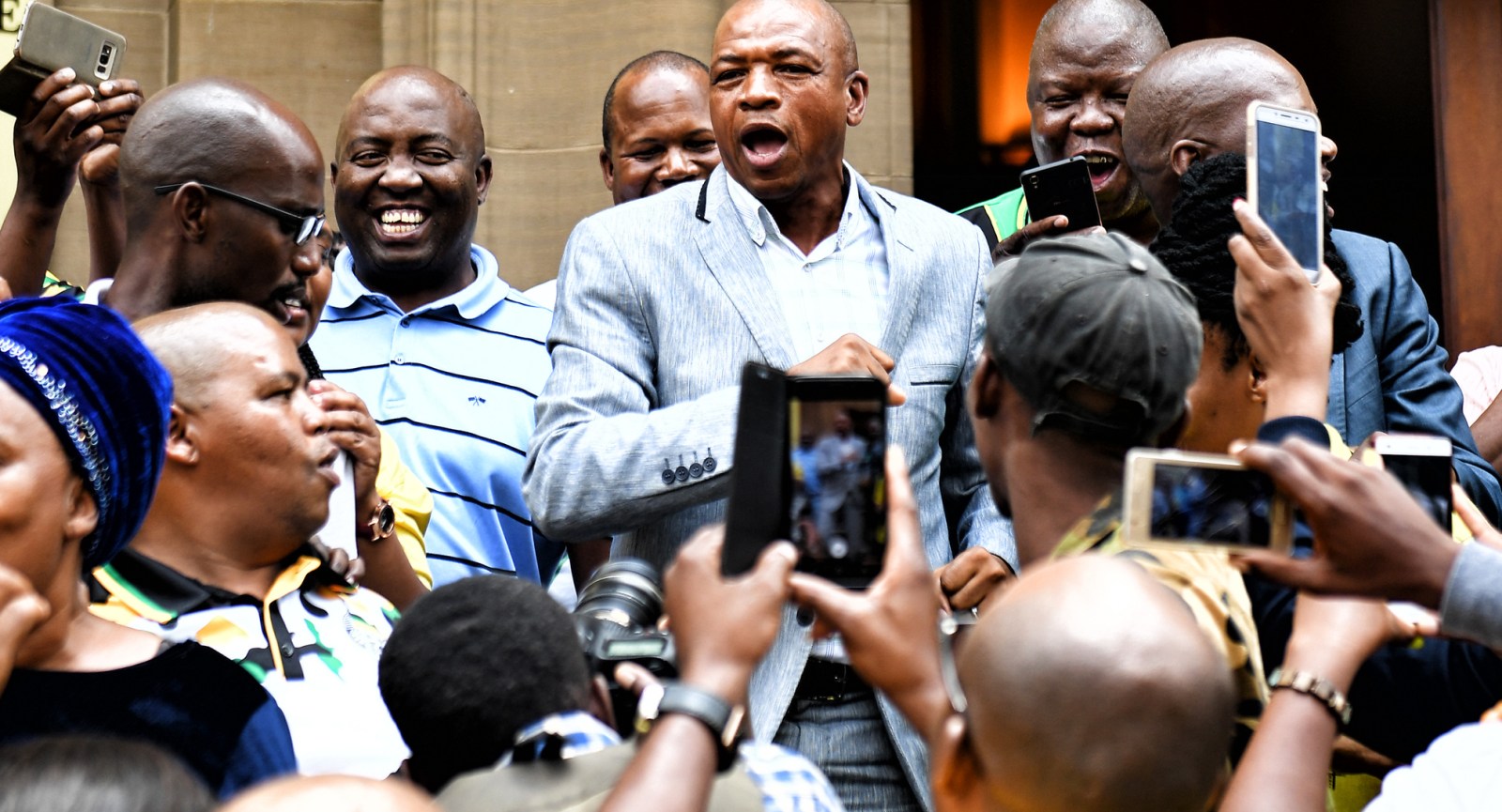 Supra Mahumapelo addressing his supporters outside the Johannesburg high court on Wednesday 6 February, 2019 after the court ruled that the decision to disband the ANC's North West PEC was unlawful. (Photo by Gallo Images/ Netwerk 24 / Beeld)

On Wednesday former North West Premier Supra Mahumapelo won another court ruling against the ANC’s national executive committee, when a judge ruled that his provincial executive committee must be reinstated immediately. Coupled by the conflict over Eskom, this is the first time the ANC has been so divided, so close to an election.

The latest ANC North West judgment is likely to seriously complicate matters for the party in that province. While, any other day of the year, that would be the dominating news of the day, the Eskom crisis is not showing signs of receding into the background.

For millions of voters around the country, life has come to something close to a complete halt. It is impossible to continue as normal when you know the power will be out. There are some who are able to plan ahead sufficiently, but many cannot. The impact on the economy is generally thought to be in the region of R2-billion per day of load shedding, although some economists say it’s impossible to put a figure on such disruption. At the same time, traffic jams get longer, factories stand idle, while managers wonder who will have to lose their jobs, and frustration mounts.

In Parliament, Public Enterprises Minister Pravin Gordhan explained on Wednesday that some of the problems were caused by design flaws at the two “new” power stations, Medupi and Kusile. He also said that the design of some of the units at Medupi was changed halfway through the project, and that it is not clear who actually made the change. Tellingly, he was quoted by Business Day as saying, “There some people who project themselves as angels but we need to put together a picture of who was responsible”, and that litigation “would certainly follow” once it was worked out who was responsible.

The day before, Gordhan had said that outside experts would be called in to try to help fix the mess that is being imposed on the country.

Voters might have an expectation that in a moment when we’re facing a national crisis, all of those in the governing party would be coming together to fix the problems. But that is not what is happening.

While Gordhan was speaking in Parliament, Cosatu was marching as part of a national strike. Cosatu officials said that the strike was “against retrenchments” but seemed unable to understand how their actions could actually lead to more job losses. One of the reasons for the protests was Ramaphosa’s restructuring plans for Eskom. And while the government has been clear that breaking up Eskom into three parts is not the same as privatisation, this is clearly not believed.

While Cosatu was marching, the SACP issued a statement supporting Cosatu. It says, “It is a fact that it is in privatisation, through tenderisation, the parasitic model of the so-called Independent Power Producers and poor quality work, for example at Medupi and Kusile, that has created the crisis of national energy insecurity that we are faced with today as a nation.”

The communists also restated their position that Eskom must be wholly owned by the government.

Fights between the ANC in power and the SACP and Cosatu in the Alliance are nothing new. They are a regular and sometimes reassuring feature of our politics. However, in the meantime, the secretary-general of the ANC itself, Ace Magashule, was reported by Independent Media as saying that Luthuli House would oppose the unbundling of Eskom if this involved privatisation. Perhaps more worryingly for those who manage Eskom, he said that there would be no retrenchments at the parastatal. Considering how Eskom’s wage bill has grown in the last few years, and how little power there is to show for it, it may well make Eskom’s financial position unsustainable, both now and in the future.

Meanwhile, the divisions in the NEC were for all to see on Twitter on Wednesday. Tony Yengeni was retweeting people who supported former Eskom CEO Brian Molefe, remembering that the day he arrived “back” at Eskom he was mobbed by employees in what was a clearly choreographed moment.

While retweeting does not always signal approval, it does appear to infer that in this case.

Earlier in the week he had retweeted former acting head of Generation at Eskom, Matshela Koko, who appears to be using his Twitter account to oppose those who are trying to fix some of the problems that started on his watch (a brief history: among other “great” achievements, Koko signed deals with the Guptas and was outed on Carte Blanche; he gave a billion rand in contracts to his stepdaughter. Molefe was forced out of Eskom after then Public Protector Advocate Thuli Madonsela found evidence that, among other things, he had spent much time on the phone to the Guptas, if not in any actual Saxonwold shebeen.

So the member of the ANC NEC, Yengeni, is actively and publicly supporting people who created the problem and now are attempting to frustrate attempts to fix the mess in the interest of the entire nation. In normal times, Yengeni would have been disciplined. But these are not normal times.

Unfortunately for the ANC, the situation does not end there. Mahumapelo’s victory in court on Wednesday now means that the order that was given last week comes immediately into effect. In the normal course of events, if a party in a case says they will appeal the judgment, the effect of that ruling is stayed until the appeal court makes a finding. But there is a provision to go to court to have the order enforced while the appeal is being heard. It is just such an order that Mahumapelo’s North West PEC has now won.

There is a complicated time element to this. Technically, the term of his PEC will actually expire this week. But his lawyers, Advocate Dali Mpofu and Advocate Thembeka Ngcukaitobi, argued that Luthuli House had decreed that there were to be no provincial conferences ahead of the elections (as often happens). This means that in fact their term in office is being extended, and it is not just academic for them to be given this order.

Perhaps the most important aspect to this is to ask why is it so important for Mahumapelo and his PEC to get back into office? It seems clear that they have plans and want to implement them. Certainly, in the game of power that is currently being played out in the ANC, every single advantage is important, and must be used. This suggests that there is indeed serious and important contestation underway within the party.

In the past, voters have given the ANC some leeway. But, so important are the governance issues now facing the country, particularly Eskom, that it is possible that some voters simply don’t know who they will actually be voting for. DM