ANC quash Sol Plaatje rebellion in latest round of by-elections 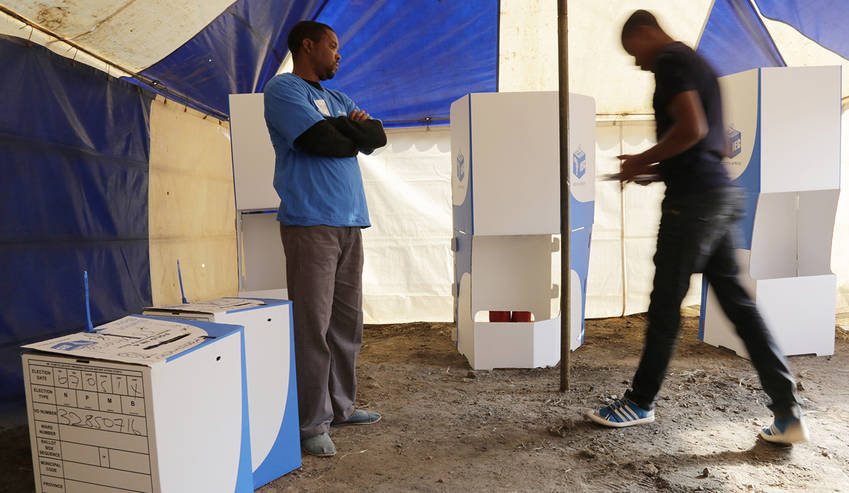 The African National Congress (ANC) retained outright control of Sol Plaatje (Kimberley) on Wednesday when they defended six out of the seven contested wards. The opposition had to win six out of seven Sol Plaatje wards in order for the ANC to lose outright control. They fell short, as only one independent candidate and former ANC ward councillor was able to win back their seat in the by-election. As expected the ANC also picked up an independent held seat in Knysna in the Western Cape.

All seven by-elections took place in and around the ANC stronghold of Galeshewe, a township in Kimberley. The seven wards voted overwhelmingly for the ANC in 2016.

It was clear that the former ward councillors running as independents were not brimming with confidence when they approached the Northern Cape High Court at the eleventh hour to halt the by-elections.

Retswelele is a township next to Galeshewe on the outskirts of Kimberley, near the R31 road which takes you to Barkly West.

Despite losing some ground here, the ANC had a comfortable hold here on Wednesday as former ward councillor and independent candidate Yvonna Qonga finished third, behind the EFF. The EFF will be satisfied with their growth in this ward. They got close to 20% in the ward and getting over 22% of the vote in one of the two voting districts.

Ward 12 sits next to ward 11 and is closer to the centre of Galeshewe and Kimberley.

While the ANC won by a big majority here, it was well down from 2016, where they received 82% of the vote here. This was largely due to the incumbent and independent councillor Magdeline Mokgalaladi getting 18% of the vote. The EFF grew here last night, getting 15% of the vote. The Democratic Alliance (DA) had very poor returns here, just edging out Mzwanele Manyi’s African Transformation Movement for fourth place.

The ANC got their biggest percentage return of the night here in Galeshewe winning 70% of the vote. Incumbent and former Ward 13 councillor Motlalepula Wapad pipped the EFF for second place but was not able to get the ward voters behind her. The EFF will be satisfied with their showing here.

Boitumelo Stout was the only former ward councillor to win back his seat last night. Of all the wards contested last night, this was the one where the ANC fared best in 2016, capturing 86% of the vote here.

Stout beat the ANC by a mere 33 votes last night. He was successful in getting a big chunk of ANC voters in the ward, and enough EFF and DA voters to push him over the line.

Former ward councillor Boikanyo Tshite was able to win 20% of the vote here last night to give the ANC some concern in Ward 19. Despite the strong showing, the ANC was still able to cruise home here last night. The EFF will be satisfied with matching what they achieved here in 2016. DA voters decided to get behind Tshite in the by-election in what amount to meagre returns for the official opposition in Sol Plaatje.

Ward 32 is on the outskirts of Kimberley. Phutanang sits next to the R31 road to Barkly West, while Platfontein comprises of the !Xun and the Khwe communities and lies next to the N8 road to Campbell.

This was the second hardest Sol Plaatje by-election for the ANC. Their vote percentage in the ward fell from 76% to 55%, as the DA had some gains in the ward, while independent candidate Motsamai Molale picked up a solid 16% of the vote for third place and the EFF got just under 10% of the vote.

In summary, the ANC had a good night on Wednesday. Most of the former councillors who defied the party struggled in their respective by-elections, and while the ANC did lose support in every single ward contested here, this was to be expected. New mayor Patrick Mabilo still has a solid majority. On a national level, this also sends a message to ANC councillors to think twice before going head to head with the party. The voters of Galeshewe largely stood with and by the ANC last night. This is a good omen for the elections in May.

Boitumelo Stout returns to the council as an independent ward councillor. He far outperformed his colleagues. The opposition will be wise to work with him as he clearly has a strong connection with the voters in his ward.

The EFF had a good showing here. The big story was always going to be about the ANC vs the former ANC councillors. In two of the wards, the EFF came second, beating the independents, and held their own in a round of by-elections where they were not party to the chief narrative. The DA had a very disappointing showing here. They lost ground in all but one of the wards. They sent a lot of big guns to campaign in Sol Plaatje. Their voters had other ideas and decided to lend their votes to the independent candidates rather than the DA. It was also a dismal outing for the African Transformation Movement. Let us see how Mzwanele Manyi’s party performs in other by-elections in the lead up to the 2019 general election.

Ward 4 sits above the N2 and stretches towards the Prince Alfred Pass on the R339. It includes the townships of White Location and Flenters and a small partial DA voting district at Buffelsnek. It is a traditional ANC stronghold which was won by an independent-Velile Waxa in 2016. Waxa was arrested on charges of murder, with regards to the death of an ANC councillor. He was also expelled from council.

The ANC were strong favourites to pick up this ward and did so on Wednesday night. They will be delighted by the fact that they will have another seat on the Knysna council. They will be concerned by the gains of the DA and the EFF in this ward.

The ANC did not have it easy at the largest voting district in the ward-Chris Nissen Primary School. This was a Waxa stronghold in 2016, but also where the ANC won 77% of the PR vote. On Wednesday night the ANC only won 55% of the vote in the district. The DA got 29%, up from 11% and the EFF got 16%.

The ANC mirrored their PR results from 2016 at the Concordia Methodist Church and St. Peter’s Anglican Church voting districts.

The DA were slightly up in their stronghold of Buffelsnek, getting just under 80% of the vote, compared to the 76% of the PR vote they got in 2016. This is a tiny voting district, accounting for less than 4% of the total valid votes in the ward.

The DA had a convincing win in this liberal stronghold. They did fall under the 90% mark in the by-election as the CAPE Party were the beneficiaries of protest votes from a section of the DA support base in the ward. The ANC will be disappointed by their third place finish here as joggers and walkers of the Sea Point Promenade forgot about their early morning 2018 workout with President Cyril Ramaphosa.

CAPE Party will be very motivated by this performance and will hope that they can replicate this showing in other areas of the province in their bid to get a seat in the Western Cape provincial legislature.

The DA will be satisfied with their Western Cape returns. They will, however, now need to fend off another party who will aim to take more of their conservative Western Cape voters away from them. CAPE Party joins the queue behind the African Christian Democratic Party (ACDP) and the Vryheids Front Plus (VF+).

The next by-election is next Wednesday when the ANC defend a safe seat in Naledi (Huhudi Vryburg) in the North West. DM

* Proportional Representation (PR) ballot results are used when they give a more accurate reflection of the ward.

** The results of Robben Island have not come in yet. This was won by the ANC in 2016 and should push them up a bit. However, in 2016, the votes from Robben Island accounted for less than half a percent of the total valid vote count in the ward