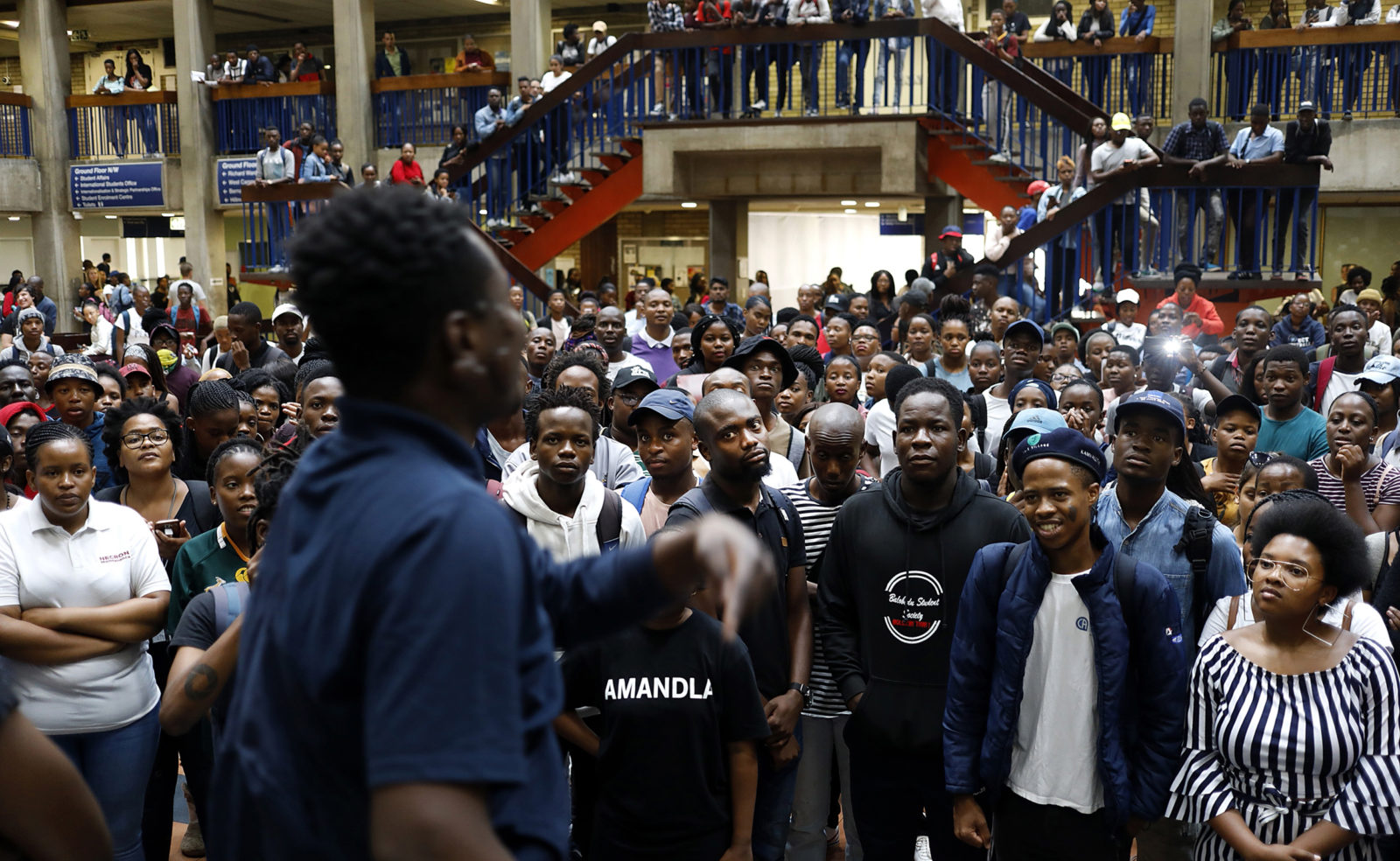 Striking students gather at Wits University during a protest for accommodation and funding on February 05, 2019 in Johannesburg, South Africa. (Photo by Gallo Images / Sowetan / Alon Skuy)

Officials from the Department of Higher Education and Training and student leaders met in Parliament on Wednesday after weeks of protests on university campuses across the country. Since the start of the academic year, one student has been killed in Durban, several faced arrests from police in Gauteng, while others erected shacks at the Cape Peninsula University of Technology in protest against lack of accommodation.

If students want the Department of Higher Education and Training to address their concerns, they must give details of specific problems at universities.

This was the call by Higher Education minister Naledi Pandor after a meeting at Parliament between the Department of Higher Education, representatives from the National Students Financial Aid Scheme and student leaders.

“It is very difficult for my department to deal with generalities… I ask that we need to have details on matters raised,” said Pandor.

The meeting follows weeks of unrest on campuses across the country.

Pandor said if she could have an idea of individual cases, for example, specific incidents of academic exclusion at universities, she would be able to follow up with the university on how to resolve it.

There have been of protests since campuses opened for registration in January.

On 7 January, protests erupted at the University of South Africa (Unisa) because its student representative council was unhappy with admission requirements and the supply of study materials, EWN reported. The university closed its doors, allowing registration to take place only online.

Then, last week, classes were disrupted at the Cape Peninsula University of Technology — the largest university in the Western Cape — as student leaders demanded that management solve accommodation problems facing students across its six campuses.

On Tuesday, GroundUp reported that shacks built by students were removed by security personnel, but students had re-erected them.

“CPUT will accommodate in the region of 33% of its nearly 36,000-strong student community in residences. This is well above the national average, so we are faring reasonably well.”

CPUT Vice-Chancellor Dr Chris Nhlapo has also announced the establishment of a task team to look specifically at student housing. He visited some residences last week.

“The most affected parties are students who have applied on time and are being denied a space because late applicants expect to jump the residence queue. CPUT is not unique in facing a student housing crisis,” said Kansley, who added acceptance to CPUT “does not automatically translate into a residence place. We are oversubscribed and will never be able to accommodate everyone who wants a place”.

During Wednesday’s discussions in Parliament the South African Union of Students told the higher education committee there was serious intervention needed at universities, which were facing issues such as a crisis with student accommodation, police brutality, student debt, problems with the National Student Financial Aid Scheme (NSFAS), and financial and academic exclusions.

The portfolio committee on higher education and training should use its oversight capacity to monitor transformation at universities, said the students’ union.

“SASSA beneficiaries need to be automatically added to NSFAS,” said South African Union of Students president Meshack Mugabe. He told the committee there had been complaints by students rejected by the aid scheme, even though they were social grant beneficiaries.

Dr Diane Parker, from the Department of Higher Education, said the department had been made aware of university shutdowns on social media “but we didn’t receive a request for dialogue”.

On Saturday, 9 February, the department, NSFAS, the South African Union of Students and other student leaders met to discuss the ongoing problems, said Pandor. The outcome of that meeting would be made public on Friday 15 February, she said. DM