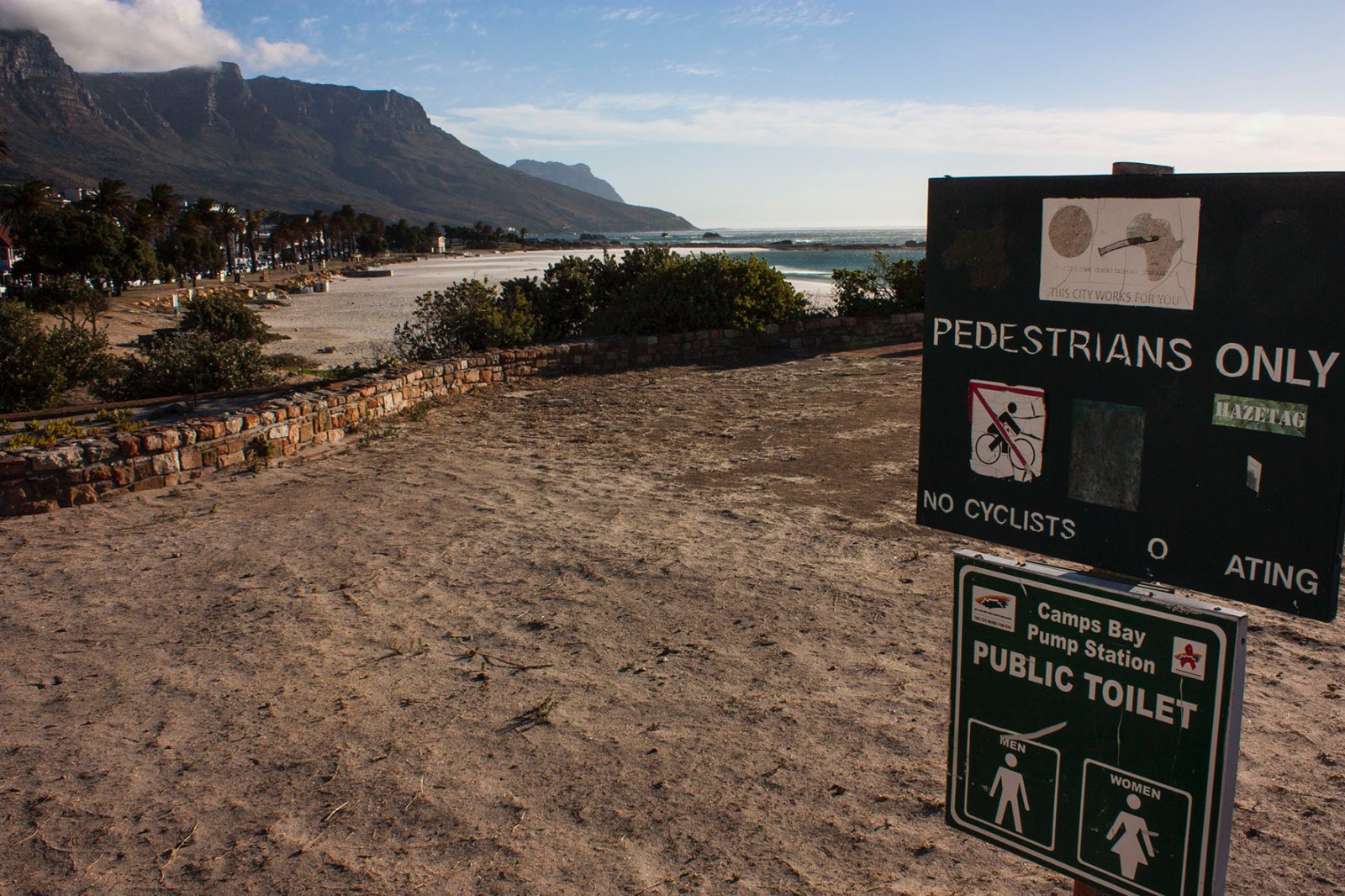 The wastewater treatment plant at Camps Bay pumps more than two million litres of raw sewage out to sea every day. While faecal contamination rarely reaches the beach, it does happen, and the City is not telling us when, or how often. (Photo: Steve Kretzmann/WCN)

The public cannot assess the effects of sewage disposal in the sea.

Cape Town’s scenic beaches, a drawcard for tourists, are occasionally contaminated by bacteria from faeces at levels which pose a risk to human health. The City claims this is due to pollution washing out the stormwater system when it rains, but local scientists suspect the millions of litres of sewage pumped into the sea every day from pipelines at Mouille Point, Camps Bay, and Hout Bay also contribute.

Overflows at the Zandvliet wastewater treatment works, which flow into the Kuils River and from there into False Bay, are also a concern.

Yet the City has not made the results of water quality tests easily available to the public for the past five years. And the last results contained in their 2018 State of the Environment Report date back to 2016.

Other than a preliminary treatment in which the sewage is pumped through a sieve to remove solid objects such as plastic bags and tampons, what is released into our ocean is what we flush down our toilets, sinks, and baths. These include the drains at light industrial and hospital buildings.

The Camps Bay sewage outfall is about 1.4km out to sea, but the sewage is dispersed little more than 700m from Maiden’s Cove on the eastern horn of the bay, which has two tidal pools and popular small inlets. The outfall services Camps Bay and Bantry Bay, and was spewing out 2.4 million litres a day in 2016, according to a report by the CSIR.

The Mouille Point outfall runs 1.7km out to sea. It pushed out 28.4 million litres of sewage in 2016, generated from Woodstock, the city centre, Green Point, Mouille Point, and Sea Point. It also takes all the sewage from the Netcare Christiaan Barnard Memorial Hospital, containing infectious viruses and bacteria. The Hout Bay outfall is 2.1km out to sea, but spews out 5.7 million litres a day closer to Dungeons, the world-renowned big wave break.

Also, the Camps Bay and Hout Bay outfalls pump sewage into the Marine Protected Area which stretches from Mouille Point, around the peninsula to Muizenberg. This is prohibited by the Department of Environmental Affairs (unless permission is granted by the minister. But permission has not yet been granted because the City has been waiting for the finalisation of its Coastal Waters Discharge Permit, which came up for renewal in 2016.

Concern over the marine outfalls was raised at least five years ago when Edda Weimann took independent samples at Clifton beach in 2013. She found that five out of six samples taken between February and March failed the water quality standards for the beach’s blue flag status.

Although the sewage outlet points are 28m and 23m below the surface for Mouille Point and Camps Bay respectively, there was further controversy three years ago when photographer Jean Tresfon released aerial footage on social media of the sewage plumes apparently reaching the surface, including what appeared to be drifting into Camps Bay. Many articles have been written about it, including a well-written summary by Marina Keenan in The Big Issue.

Despite concerns expressed publicly and in scientific papers by professional experts on the health risks of exposure to microbes, and more seriously, persistent organic pollutants such as those contained in prescription drugs and household detergents (including natural and synthetic hormones) — the testing for which is not required by national legislation — the City maintains that the sewage pumped out through marine outfalls do not pose a risk to human health or the marine environment. On the one hand, it’s not alone: many large cities dispose of sewage in the same way, but on the other hand, the City is failing to publish the results to prove there is no health risk.

The City tests the water at beaches every two weeks to monitor levels of E.coli and Enterococcus bacteria. These organisms indicate how many other microbes there are. But despite historic data revealing periodic incidents of high E.coli contamination at the shore, the City has failed to make these results public in recent years. Up until five years ago, the City published an Inland and Coastal Water Quality report at sub-council meetings every six months, which contained the test results for the previous six-month period.

The City’s reasons for discontinuing the publication of these results is unclear, with different answers being provided. In January 2018, the City said the report’s format was being reworked to align with new water quality guidelines, part of which required beaches to be graded in terms of water quality. A report on this was supposed to be presented to sub-councils before the end of 2018. It did not happen.

Then last month, mayco member for water and waste services Xanthea Limberg said the reporting had been deferred because of a restructuring process in the City, which began in 2017.

Limberg said water quality reports were presented at catchment management forum meetings and to Protected Area Advisory Committees (PAACs). However, the report presented to the Zandvlei PAAC, for instance, details only the test results for Zandvlei.

So public access to city-wide results has been, for all practical purposes, non-existent since 2013, and for no clear reason. The results of these tests used to be reported by at least one media outlet, West Cape News.

The State of the Environment report notes that Three Anchor Bay (on the border of Mouille Point and Sea Point) failed the “strict” guideline in 2016, while Saunders Rocks in Sea Point failed both guidelines that year, as did The Kom in Kommetjie.

Fish Hoek and Muizenberg beaches failed the “strict” guideline, with a number of other beaches on False Bay failing both. These include Mnandi, Monwabisi, and Kalk Bay Harbour beach.

The lack of information for 2017 and 2018 means there is no way for the public to know via the City’s mandatory testing, whether bacteria loads increased along the Atlantic seaboard during holiday season when visitors increase the amount of sewage, nor what the situation is in winter when rainfall is common and the predominant north-west winds are likely to blow the sewage plume shorewards. Aerial photographs taken by Tresfon show that under certain conditions the sewage plume appears to enter Camps Bay. Once in the bay, wave action would keep it there. The City vigorously contested this at the time.

Independent tests for E.coli and Enterococcus conducted by senior professor Leslie Petrik at the University of Western Cape’s Chemistry Department in 2017 revealed that while the majority of results were fine, one sample taken on the edge of what kayakers identified as the sewage plume off Mouille Point, contained an E. coli count of 12,650 Colony Forming Units (CFU)/100ml. The latest guideline for the safety of health is that half the samples must be at most 14 CFU (Colony Forming Units) per 100ml, while not more than 10% of samples should exceed 31 CFU/100ml. Samples should never exceed 800 CFU/100ml on any given day. Petrik says that on the same day, a sample taken a kilometre from shore contained an E.coli count of 4,700 CFU/100ml. (See this study by Petrik and her colleagues.)

While the average beach-goer may not swim 1km out to sea, especially given the water temperature, beach sand is also contaminated if sewage plumes drift ashore, or when beaches are contaminated by stormwater runoff. One sample taken 30cm below the surface of the sand contained an Enterococcus count of 1,460 CFU/100ml while on a separate day a count of 7,200 CFU/100ml was measured.

A CSIR report of 2017 (Cape Town Outfalls Monitoring Programme — 2015/2016 Survey), commissioned by the City following the outcry over the sewage outfalls, found that there was “clear evidence” of effluent not being dispersed before reaching the sea surface in some surveys, although there was no clear evidence it was reaching the shoreline. However, the report stated there was “indirect evidence from faecal indicator bacteria counts in seawater samples collected at many sites along the Cape Town shoreline over an extended period that effluent is possibly, even if infrequently, reaching the shoreline”.

Although this effluent was likely to be from stormwater runoff, “regardless of the source of the bacteria their counts in shoreline water samples at many sites were, at varying frequencies depending on the site, high enough to suggest a significant periodic risk to humans recreationally using nearshore and shoreline waters”.

Although sewage outfalls are common in coastal cities around the world, the CSIR states:

Limberg says that the cost of treating sewage presently being pumped to sea cannot be justified, given the lack of evidence there is a problem. But she also said the City will not increase the capacity of the current sewage outfalls. DM