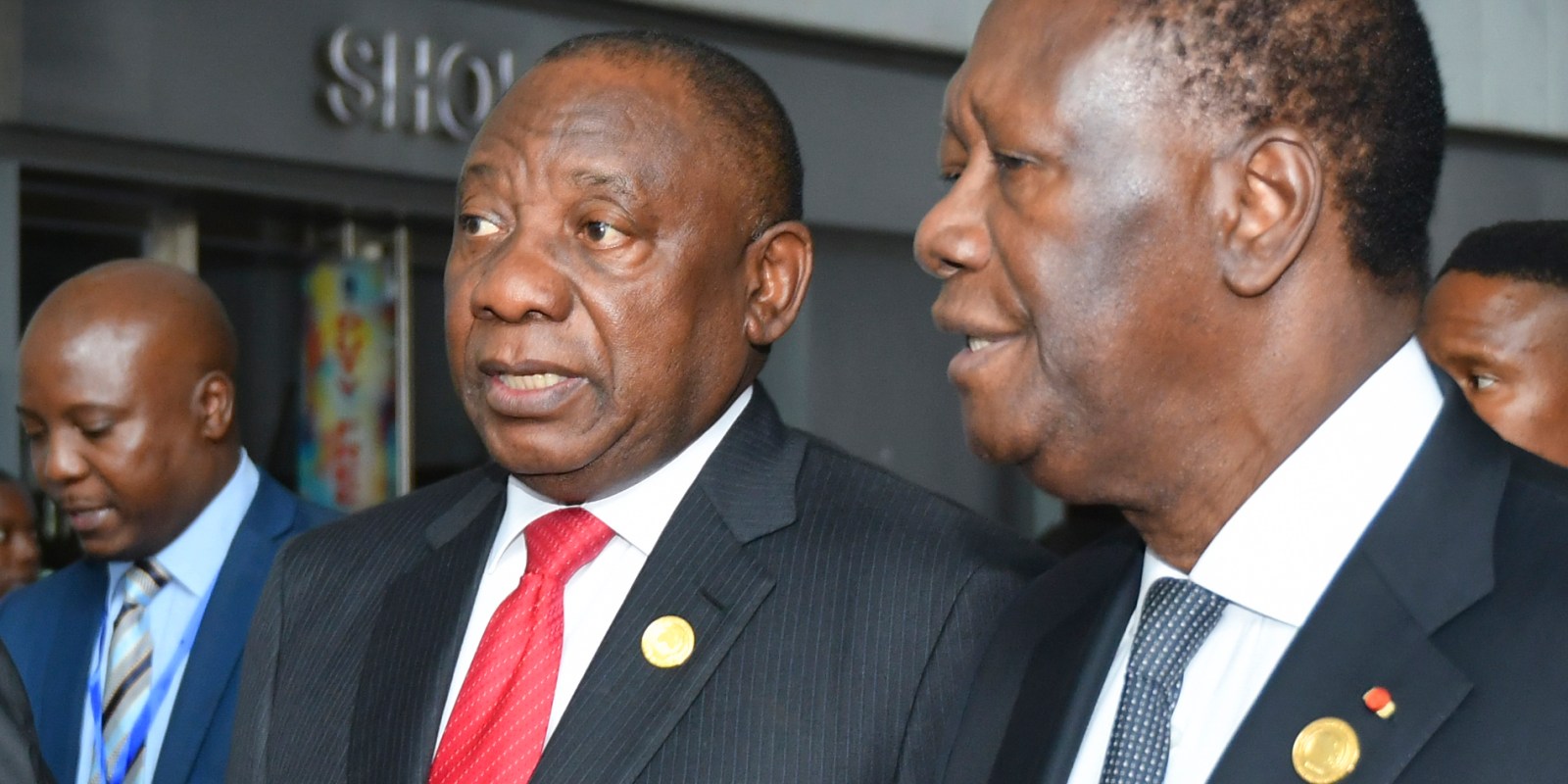 South Africa is set for a big 2020 on the international stage after it was announced that its president (most likely Cyril Ramaphosa) will be chairing the African Union next year. It will also be footing the bills for a certain monarchy on its border with Mpumalanga, to play host to AU activities.

There were handshakes and jokes as President Cyril Ramaphosa took his place behind the small South African flag in the front row on the floor of the vast Nelson Mandela Plenary Hall at the African Union headquarters in Addis Ababa for the opening session of the 32nd African Union heads of state summit. Kenyan president Uhuru Kenyatta, en route to his seat, paused a bit longer to chat, full of jokes, possibly reminiscing about the ANC’s birthday bash in January 2018 which he came to attend in East London. Ramaphosa apparently reached out to Kenyatta himself on that occasion to pull the countries closer.

In the row behind Ramaphosa sat Zimbabwean president Emmerson Mnangagwa. When he arrived moments before, he paused for a discussion with international relations and co-operation minister Lindiwe Sisulu – part of the six or seven-strong Cabinet delegation that travelled to Addis with Ramaphosa. For the rest, the man with his now-famous scarf mostly sat quietly, possibly thinking of the economic troubles back home, and devoid of the adulation that was normally reserved in this forum for his aged, stumbling predecessor.

Ramaphosa’s first AU summit in Ethiopia turned out to be an important one, as South Africa was chosen to chair the continental body in 2020. The chair is rotational, and this year it was the turn of the Southern African Development Community to put forward a candidate. The lobbying wasn’t half as tough as, say, in 2012 when Nkosazana Dlamini Zuma was elected AU Commission chairperson, but South Africa wasn’t the first choice. There was talk initially that it was eSwatini’s turn to lead. Officials, however, said the monarchy – which is heavily in debt – complained about “capacity constraints”. The officials didn’t clarify the meaning of this, but it seems to be about money.

eSwatini would still be “hosting”, officials said, which means the mid-year summit would go to the kingdom. Except, following the AU reforms, mid-year summits are supposed to have been downgraded to gatherings. This aspect of the reform hasn’t gained too much traction so far because hosting summits is a matter of national pride, and perhaps the continental body would agree to make an exception for eSwatini. It has, after all, spent billions of rand (an estimated R4.8-billion, to be more exact) it doesn’t really have, to build a massive convention centre for this purpose.

“South Africa will still have to help foot the bill,” an official said, “because it would have to provide security and logistics.”

eSwatini does not have the military or the cars and drivers to ferry all the big people around, but King Mswati III built a big airport a year or two ago. This means fugitives of international justice, like Sudanese president Omar al-Bashir, could jet in and out for the summit without the fuss caused in 2015 when the AU summit was hosted in Sandton. (eSwatini is not a signatory to the Rome Statute.)

Bar a big upset during the May 8 general elections, Ramaphosa will still be in the seat in 2020. As AU chair he is likely to focus strongly on trade and investment, and perhaps pay some polite lip service, at the very least, to human rights issues. During a ceremony where South Africa ratified the African Continental Free Trade Agreement (AfCFTA) late Sunday afternoon, AU Commission chairperson Moussa Faki Mahamat praised the country for its political commitment to free trade in the continent.

“With the support of South Africa, we can see this become a reality,” Mahamat said.

Ramaphosa said the AfCFTA would move “our continent in a direction that will see African countries progress”. Only about five more ratifications are needed to have the agreement come into effect.

Ramaphosa might also want to see AU meetings start more punctually, although his powers to enforce this might be limited. He appeared to have spent an hour or more waiting on Saturday night for all to arrive for the SADC meeting, which ended up not starting on time, just like the opening session of the summit, which kicked off more than 90 minutes late.

Rwandan president Paul Kagame’s term at the helm of the AU ended in a bit of a storm on Sunday. His invitation to Microsoft founder Bill Gates, whose foundation does a lot of work in health in Africa, and Fifa president Gianni Infantino, to address the African heads of state, caused some friction with fellow leaders. It’s highly unusual to invite speakers from outside the continent. Despite this, Kagame failed to live up to his good record of keeping gender balances. Apart from a report-back on refugees, not a single woman spoke during the opening session.

Kagame, however, worked hard in the past year to make the role of AU chair a prominent one, and he hosted no fewer than two summits in Kigali – one on the AfCFTA and the other on AU reforms.

Apart from the AU, South Africa is also currently a non-permanent member of the United Nations Security Council, where numerous countries and pressure groups have tried to lobby the country to pursue what they consider to be a human rights approach.

South Africa did review its vote on Myanmar in favour of such, but the way it’s downplayed opposition concerns of rigging during the Democratic Republic of Congo elections in favour or stability had some questioning its commitment. (Even at the AU opening on Sunday, newly-elected president Felix Tshisekedi was welcomed without any references to concerns around the integrity of the vote.)

South Africa would be in a strong position to represent the continental body’s concerns on an international stage through this. DM