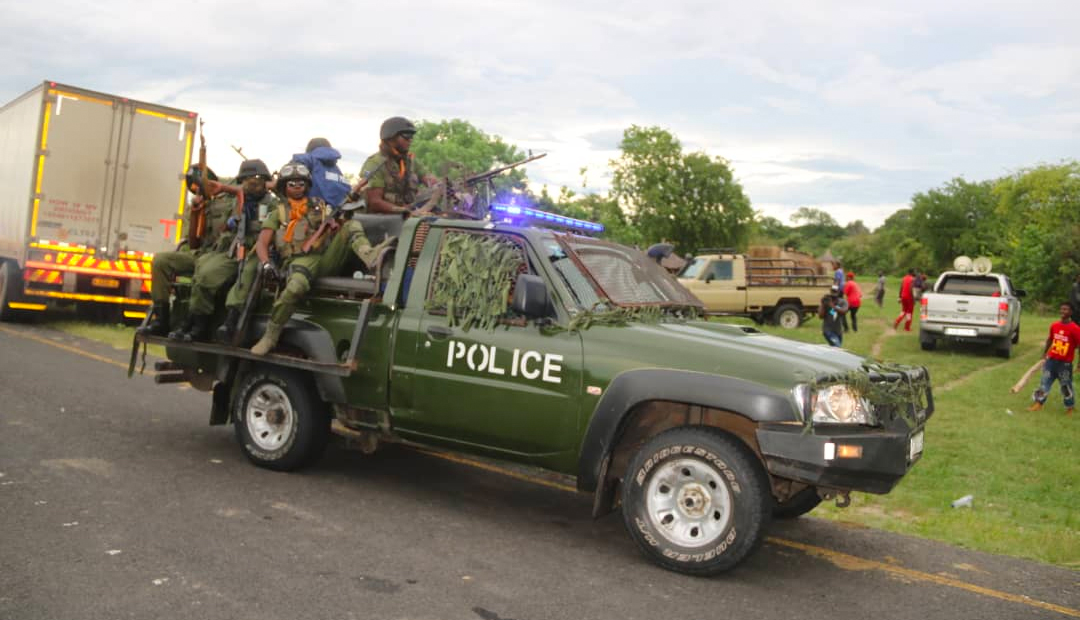 An image of the heavily armed police car before the altercation with the opposition leaders last week. (Supplied)

Police say they will investigate the incident – but who will they investigate?

But it’s not clear if they will focus on alleged police excesses or the “unruly crowd” of Hichilema supporters.

Hichilema says police fired live ammunition at the meeting which he was addressing on Friday, to try to kill him.

Officials of his party, the United Party for National Development (UPND), said on Sunday that they were still trying to assess the casualties from the shooting in the village of Sesheke in south-western Zambia.

They distributed video clips showing police driving through the area and apparently firing several bursts of rapid automatic gunfire as well as tear gas. The videos also show people fleeing or hiding behind vehicles. One shows a person with a bloody chest wound being treated.

Video of the altercation: Supplied

But Zambian police have denied using live ammunition to disperse what they called “an unruly crowd” of UPND supporters and that no one had died. And Zambia’s High Commissioner to South Africa Emmanuel Mwamba claimed on Sunday that videos distributed by the UPND were “doctored”.

The country’s police chief has vowed to reinforce the police in Sesheke to ensure they use “proportionate force” to stop violence in the area.

Meanwhile, the Electoral Commission of Zambia has urged all political parties to adhere to campaign timetables and has “encouraged” the police “to remain professional and ensure that agreed campaign schedules are adhered to, and are conducted in a professional manner”.

The clash was evidently sparked by the Zambian government’s objection to Hichilema holding a political rally in the same village and at the same time as Zambian President Edgar Lungu. Both were campaigning for their party’s candidates in an upcoming parliamentary by-election in the Sesheke constituency.

Hichilema tweeted on Friday: “This chap (Lungu) attempted an assassination on my life without any provocation. We were holding a peaceful campaign meeting (due to a by-election) in a village, in Sesheke, Western Province.

“We were almost 35 kilometres away from his (Lungu’s) own meeting. He sent a group of about 100 heavily armed men who opened heavy fire (including machine guns) at us. With God’s grace, I survived and had to hide in the forest, walked/ran for eight hours.

“This chap is ruthless, brutal, a real monster who, if unchecked, will destroy Zambia beyond recognition. We are still establishing how many people, the extent of injuries and their identities.

“That is how it happened in Sesheke, Maondo ward,” Hichilema continued, referring to the videos he and his party distributed. “Live bullets and tear gas. The saddest side are the little children who are likely to sleep in the bush.”

A UPND official said on Sunday that the party was still trying to assess the extent of injuries.

High Commissioner Mwamba insisted, however, that the videos of rapid automatic fire were “doctored as we don’t have the weapons inserted/Photoshopped in the video.

“Ask any security expert, they will tell you about that rapid gunfire you can hear. And the response from the people is different.”

On Saturday Zambia’s Inspector General of police, Kakoma Kanganja, issued a statement under the headline, “We will deal with anyone found wanting in yesterday’s political violence, warns police chief.”

The statement quoted him as saying police were deeply concerned with the political violence in Sesheke district.

“The police chief said the police will not tolerate any individuals perpetrating violence and anyone found wanting will be sternly dealt with.

“The police has further clarified that no live ammunition was fired by any officers that were dispersing the unruly crowd and no life was lost as a result of this fracas in Sesheke.

“As Zambia police, we have since reinforced officers to ensure that they use proportionate force in ensuring that violence is brought to a stop,” Mr Kanganja said.

“We will institute an inquiry to bring to book all those that have perpetuated this violence and we, therefore, appeal to all electorates of Sesheke and all political parties participating in the Sesheke by-elections to exercise restraint and tolerance as required in a civilised democratic society during and after elections.”

Zambia’s Home Affairs Minister Stephen Kampyongo told local television over the weekend that police had advised Hichilema not to enter Sesheke on Friday, “knowing well it was reserved for the president”. He also warned Hichilema that “there is only one president in Zambia”.

Hichilema has clashed before with Lungu over political turf. In April 2017 he and five supporters were arrested and charged with treason after his motorcade refused to give way to the president’s on an inter-city road.

He was detained and freed in August of that year after intervention by Commonwealth Secretary-General Patricia Scotland. But the judge in the case warned Hichilema he could be re-arrested at any time on the same charge. DM