STATE OF THE NATION ADDRESS 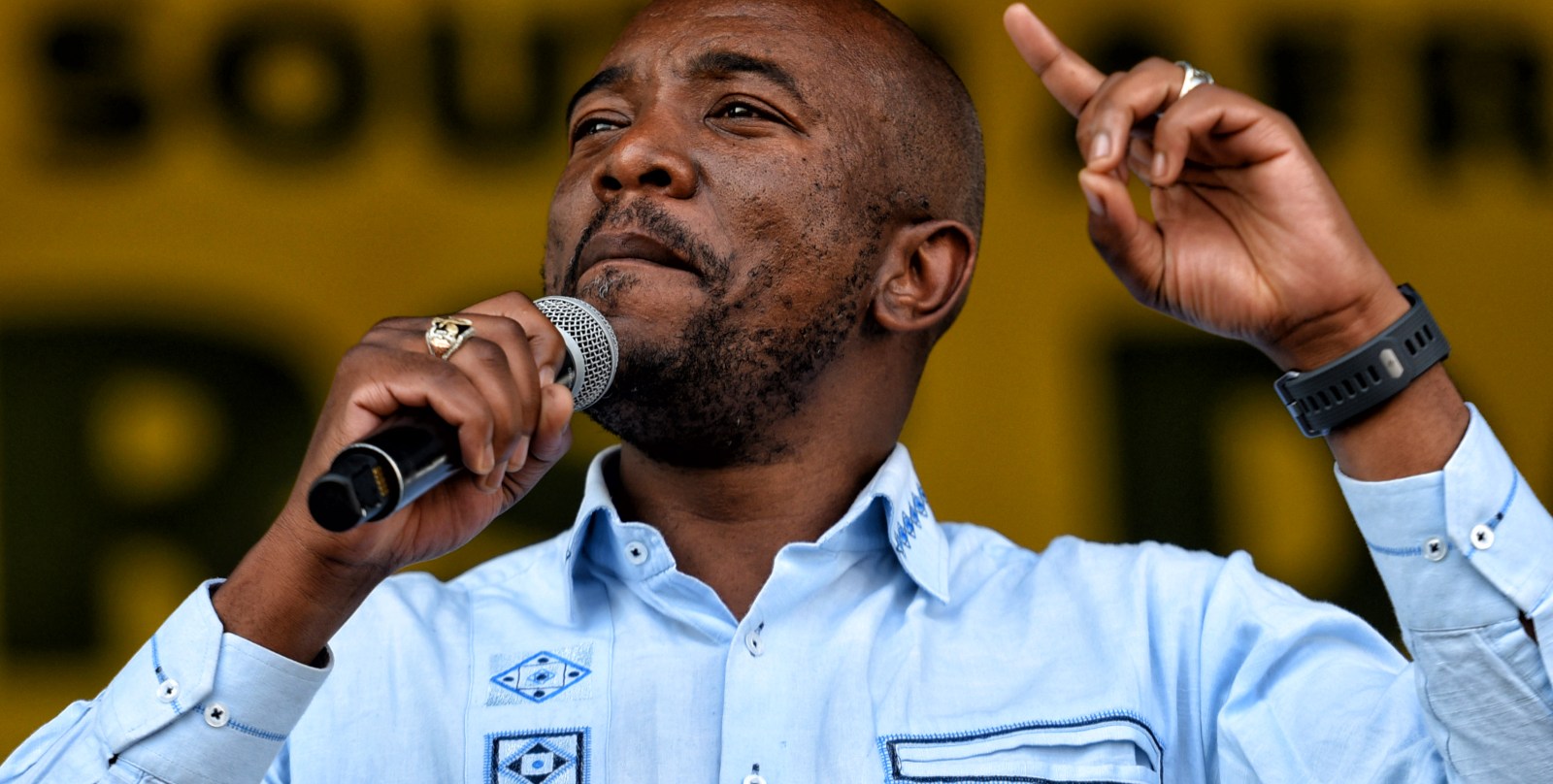 At an event styled as an alternative State of the Nation Address, DA leader Mmusi Maimane said on Wednesday that the 2019 elections must be ‘a referendum’ on ANC performance, not ‘an expression of hope for a better version of the ANC’ under President Cyril Ramaphosa. Corruption, State Capture and need for credible leaders and governance were also raised by the UDM, Cosatu and civil society groups such as the Right2Know Campaign.

It was relatively easy during the administration of Jacob Zuma, whose scandal-ridden presidency was a gift that kept on giving to the opposition for points of political attack. Not so much now under President Cyril Ramaphosa. The ANC, privately and very quietly, will acknowledge that Ramaphosa’s ratings are high — Daily Maverick has been reliably informed it is in the 70% range — and the expectation is that come polling day this popularity will pull up the governing party, whose rating is significantly lower.

DA national leader Mmusi Maimane’s strategy is to drag down Ramaphosa, both as the ANC’s and the country’s president. That means driving home Ramaphosa’s participation in the Zuma presidency as his deputy and highlighting the R500,000 Bosasa gave to CR17 — Ramaphosa’s campaign team before the December 2017 Nasrec ANC national conference — through his son with whom Bosasa had a consultancy contract.

It was “a bribe, in my opinion”, Maimane said about the campaign donation that Ramaphosa made an appointment to see Public Protector Busisiwe Mkhwebane about.

At an event in Cape Town styled as an alternative State of the Nation Address, the opposition leader said the testimony before the Zondo Commission of Inquiry into State Capture showed “how Bosasa has been an ongoing enrichment project for the ANC for the past two decades and how our people were sold out for a braai pack and some beer”.

Maimane touted the DA as business- and investment-friendly, with positive governance and job-creation track record for more than a decade in the Western Cape and Cape Town:

“That is the DA difference. If you are not stealing money, you can put it to good use.”

But this came somewhat unstuck, unexpectedly stumping Maimane. The hiccup came over a question from invited diplomats, who said the domestic business community had indicated its positivity about Ramaphosa’s track record, and its willingness to shift from the DA to the ANC.

“There’s this romantic view of President Ramaphosa that makes us believe he landed from Mars. He was part of Jacob Zuma’s presidency. It was this ANC in charge of the past nine years, together with Ramaphosa,” responded Maimane, adding: “If you want the state to be looted even further, give the ANC a vote.”

That interaction shows the DA’s dilemma: It seems uncertain how much traction it can gain by its message that the ANC under Ramaphosa is no different, and renewal impossible. Or to use Maimane’s bus analogy:

“The ANC is a broken bus — dangerous and unroadworthy — hurtling down the road with all of us on board. What they now have in Cyril Ramaphosa is just another driver of the same doomed bus… We don’t need a new driver of the old bus. We need to switch buses. And when deciding which bus to board, there is only one thing that matters: Your track record. Everything else is insignificant.”

Segue to the 2019 election being a referendum on the ANC. And the DA’s motto that where it governs, it governs best.

The DA’s manifesto is being finalised at the weekend before the formal launch later in February, but Maimane on Wednesday gave some hints: Protecting private property rights, safe streets, “a country free of corruption”, a provincial police force and provincial rail system where the DA governs, and as part of the business- and investment-friendly package, incentives to investors that meet minimum job-creation standards and reduced tariffs at ports and airports.

Or, in Maimane’s bus analogy:

“It (the DA plan) represents a new bus, heading off towards a bright new future, and not just a lick of paint and a different driver.”

But in many ways, this touted alternative SONA has hit on the themes running through everyone’s to-do list across the body politic. There is broad agreement on the key issues facing South Africa: State Capture, unemployment figures that show four out of every 10 South Africans are out of work and too disillusioned to even try to find work, sharp and rising inequality and failures of effective service delivery. Few, if anyone, would claim South Africa is where it was hoped it would be in those heady turbulent first days of the country’s constitutional democracy.

“Our massive socio-economic problems remain glaring after 25 years into democracy,” United Democratic Movement leader Bantu Holomisa told the Cape Town Press Club on Tuesday, adding later that “the reality is that South Africa is swamped in corruption scandals” across almost all state institutions.

“We are a nation of commissions of inquiry because the governing party has decided to put itself and its corrupt leaders at the top of government’s agenda rather than serving the people.”

Holomisa had persistently written to Ramaphosa asking for the inquiry now underway into the Public Investment Corporation after a series of dodgy investments and mismanagement allegations emerged at the manager of R2-trillion of government workers’ pensions.

Given that the UDM’s election manifesto launch is in Port Elizabeth on 16 February, Holomisa was reluctant to release details at the Cape Town Press Club except to say:

“The UDM, as it promised the nation, shall not rest until those who have stolen from the pensioners face the might of the law.”

If there were to be “any meaningful change and hope” the upcoming 2019 elections must remove from power “thieves, who are mainly in the leadership roles of the ruling party at all levels”, and for an active citizenry helping the country’s development trajectory.

“We cannot be indifferent to the battle to bring back hope to our nation.”

“We need a shift towards a labour-absorbing growth path,” said Cosatu in a special CEC statement that also called for “reinvigorated public institutions… to strengthen the weak structures of the state to turn the public sector into an effective vehicle for the delivery of basic social services and goods such as housing, education, health and water.”

Not a word on Eskom, whose financial troubles remain widely described as the biggest risk to South Africa’s economy. A subsequent Cosatu statement on its SONA expectations described Eskom as “a ticking time bomb” with its management lacking a rescue plan, but also warning against attempts to retrench staff as this would be seen as “nothing but a declaration of war against workers”.

“We reject any plan that punishes the victims of Eskom mismanagement, the workers, by retrenching them,” said the labour federation.

Corruption and State Capture are also big in civil society. The Right2Know Campaign (R2K) is demonstrating in order to rid the Cabinet of those fingered in testimony before the Zondo Commission. It is also campaigning for affordable and accessible data, an end to surveillance and protection of the rights to privacy and to protest.

“As activists, we are anxious to know what repercussions those implicated in the State Capture inquiry will face. The extent of how the alleged corruption has plagued our government is beyond shocking,” said R2K.

“The 2019 SONA is significant not only because it’s an election year, but also because of the deep corruption revealed during the State Capture inquiry.” DM