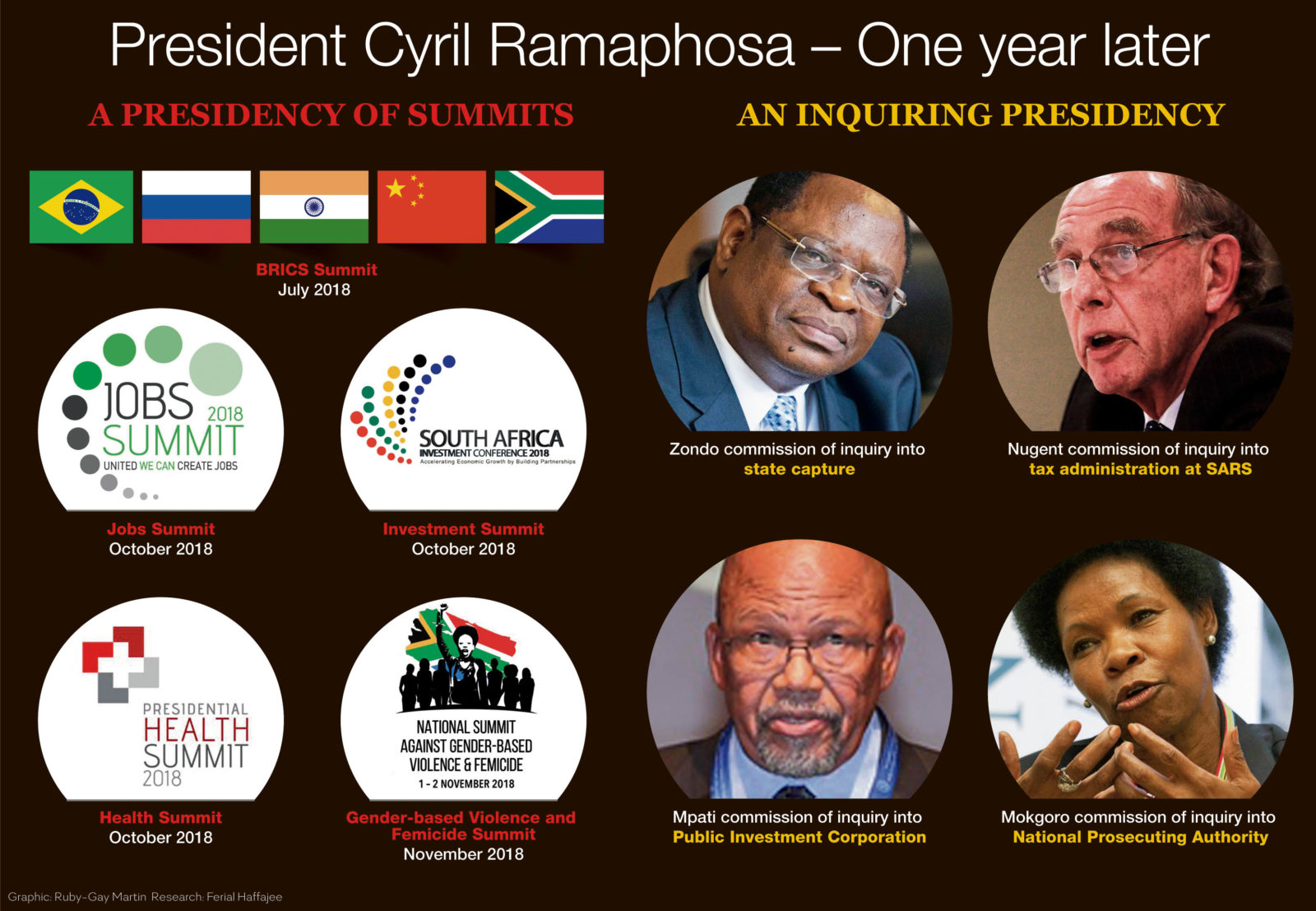 During the first year of his presidency, Cyril Ramaphosa has hosted numerous laudable summits and launched inquiries into State Capture and corruption. Will he be up for the nimble decision-making that South Africa needs next?

A year into his presidency, Cyril Ramaphosa’s governing ideas are taking shape. Two key forms are defining how he governs: By summits, or the big tent approach, and by a series of inquiries into State Capture.

Given his history as the chair of the Constitutional Assembly, which hammered out the contours of South Africa’s supreme Constitution, and as a trade union negotiator sitting at tables where labour and business arm-wrestled each other, Ramaphosa has brought this philosophy of co-operative governance into his presidency.

He has hosted a jobs summit, an investment summit, a health summit and a gender summit. The idea behind each is to host a big table of often competing interests to arrive at solutions where each group sacrifices something but achieves some of its aims. In a country of political, ideological, racial, class and other cleavages, the philosophy of negotiation and co-determination is a relevant one, but impact takes longer to achieve than by making active choices and governing.

Each summit has arrived at a set of resolutions but getting regular answers from the Presidency on implementation has proven a challenge. Without active monitoring, the summits risk turning into expensive talk-shops.

To deal with endemic State Capture and corruption, Ramaphosa has turned to retired judges to take up cudgels for him. The first was Judge Robert Nugent, the no-nonsense judicial officer who ran the inquiry into tax administration and mismanagement at the South African Revenue Service (SARS). Nugent completed his work in six months and provided Ramaphosa with the cover he needed to axe incumbent Tom Moyane as SARS commissioner who, the commission heard, ran the institution into the ground and allegedly started personally concluding tax settlements with big corporations, a red flag for corruption in revenue collection.

He has also returned Judge Lex Mompati to service. This retired Appeals Court judge is now running the inquiry into the Public Investment Corporation. With former Reserve Bank governor Gill Marcus and leading stockbroker Emmanuel Chief Lediga, Mompati will oversee a grand probe into how the PIC manages more than R2-trillion in assets. This inquiry is looking into eight specific non-listed sector deals, but it can go deeper than that.

Judge Yvonne Mokgoro, a former Constitutional Court judge, is presiding over a probe into the National Prosecuting Authority and specifically into whether the suspended deputy director of public prosecutions Nomgcobo Jiba and the head of special commercial crimes unit, Lawrence Mrwebi, are fit to hold office.

The two are believed to be the key agents of capture at the NPA and, at another commission, allegations have emerged that both Jiba and Mrwebi were on the take from Bosasa.

The main probe underway is the Commission of Inquiry into state capture chaired by the deputy chief justice Raymond Zondo. This is the McDaddy of commissions of inquiry as its remit is wide and its term set down for two years. This inquiry is hearing evidence of large-scale corruption of senior ANC leaders reaching all the way up to the national cabinet. The jury is out on whether these hearings will help or harm Ramaphosa’s political future as he is not directly elected but is head of party political system.

Faced with a Cabinet that he could not change significantly because of the tenuous balance with which he holds power, Ramaphosa has used inquiries to deal with the failures of the criminal justice system as well as with weak tax administration which was costing South Africa. In addition, the Zondo Commission of Inquiry has significantly weakened his political adversaries in the ANC by exposing, in often excruciating detail, their corruption.

And Ramaphosa has used the summits, as well as other working groups like kitchen cabinets or brains trusts, to help think through intractables like youth unemployment, weak to anaemic growth as well as the management of state enterprises. After the 2019 election, Ramaphosa will not be able to use the big tent approach to govern as it is recognised as a good strategy for transitional arrangements but the tents can be too big for nimble decision-making which South Africa now needs on a number of fronts. DM