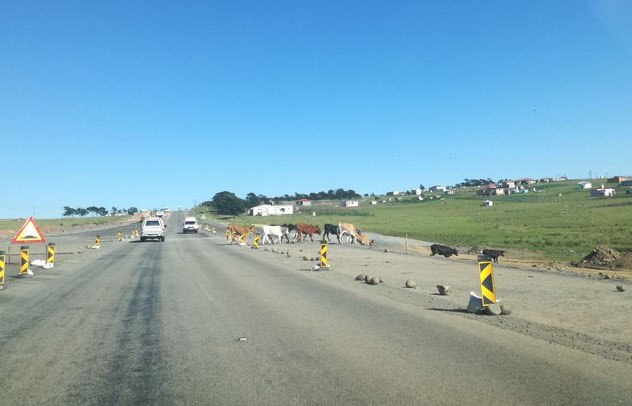 A dispute over future of N2 route takes an interesting turn as contractor pulls out. Wilmien Wicomb

Xolobeni on the Eastern Cape’s Wild Coast has become well-known for two protracted legal battles. A group of residents from the Umgungundlovu community in the area has opposed mining by an Australian company and also the construction of a new section of the N2 toll road. The two disputes are probably related.

On Monday lawyers for the residents sent a letter to the South African National Roads Agency (Sanral) telling it to immediately stop the construction of the road that is set to cut through this undisturbed area.

The demand from community members was prompted by the announcement last week of Sanral’s contractors, the Aveng-Strabag Joint Venture (ASJV), that it has pulled out of the construction of the Mtentu Bridge, a section of the new N2 road. ASJV said that its withdrawal from the R1.65-billion contract was prompted by the ongoing objections of the affected communities.

The N2 Wild Coast Toll Highway Project spans some 560km and largely follows the route of the current N2. But Sanral’s plan also includes a 90km extension that will run through several rural communities.

In the Pretoria High Court in December, Sanral said that it could not stop the construction of the road at this stage because it has already spent large sums on it. For example, about R1.7-billion has been spent on the Mtentu Bridge contract. (See report.)

Community activists argue this is a problem Sanral created for itself: the parastatal spent the money knowing that people in the way of the road would refuse to be relocated from their land.

Residents have raised objections to the plan since it was first conceived some 20 years ago. They told the court last year that they had seen for themselves the destructive impact on neighbouring communities severed by the construction of the R61 highway.

Community members suspect that the real reason for the new N2 route was to facilitate titanium mining in the area. Last year, the Xolobeni community won a victory against the proposed mining project in the area when the Pretoria High court ruled that its consent was required before mining could go ahead on their land.

In 2005, Sanral applied for an environmental authorisation to proceed with the road. Under South African and international law, a successful authorisation depends on understanding the impact of the project on affected communities. This must follow extensive consultation, plans for mitigating negative effects, and a plan to relocate residents who consent to be moved. The Minister of Environmental Affairs granted the authorisation in 2010.

But residents say that Sanral did not seek their consent, nor has it produced a relocation plan. So they went to court. The case has been delayed since 2010 — which residents blame on Sanral. But in December, the South Gauteng High Court finally heard the case of resident Sinegugu Zukulu.

During this time Sanral has continued to construct the road. This has been met with protests and disruptions by residents along the route. While Sanral has managed to ignore these protests and forge ahead, its contractor, ASJV, has had enough.

Minister Gwede Mantashe told mining executives at the Mining Indaba held in Cape Town this week that his department will appeal the Xolobeni mining ruling. Mantashe wants to reaffirm government’s authority in regulating mining. To give communities the right to decide whether mining may take place on their land would create “chaos”, he insisted.

Mantashe’s visit to the area last month indeed ended in chaos. Community members accuse the minister of having refused to allow them to speak and police of using rubber bullets to disperse protesters.

While the Mining Indaba was taking place, Mantashe’s nemesis, Nonhle Mbuthuma, a leader of the Xolobeni activists, was sung to the stage to deliver the keynote address at the Alternative Mining Indaba. She criticised Mantashe’s latest announcement that the government would do a survey in the community to ascertaining its views.

Mbuthuma asked: “Where in all of South Africa has the government ever done a survey on behalf of a mining company – using tax money?” She criticised Mantashe for, on the one hand, appealing the Xolobeni court judgment while on the other, forcing his way into the community with rubber bullets at the end of last year, ostensibly to “consult”.

They have asked him to stay away, said Mbuthuma. “Every time he comes, he brings conflict.” DM

Disclosure: The writer used to be with the Legal Resources Centre where she assisted the Xolobeni residents. She does not currently assist them