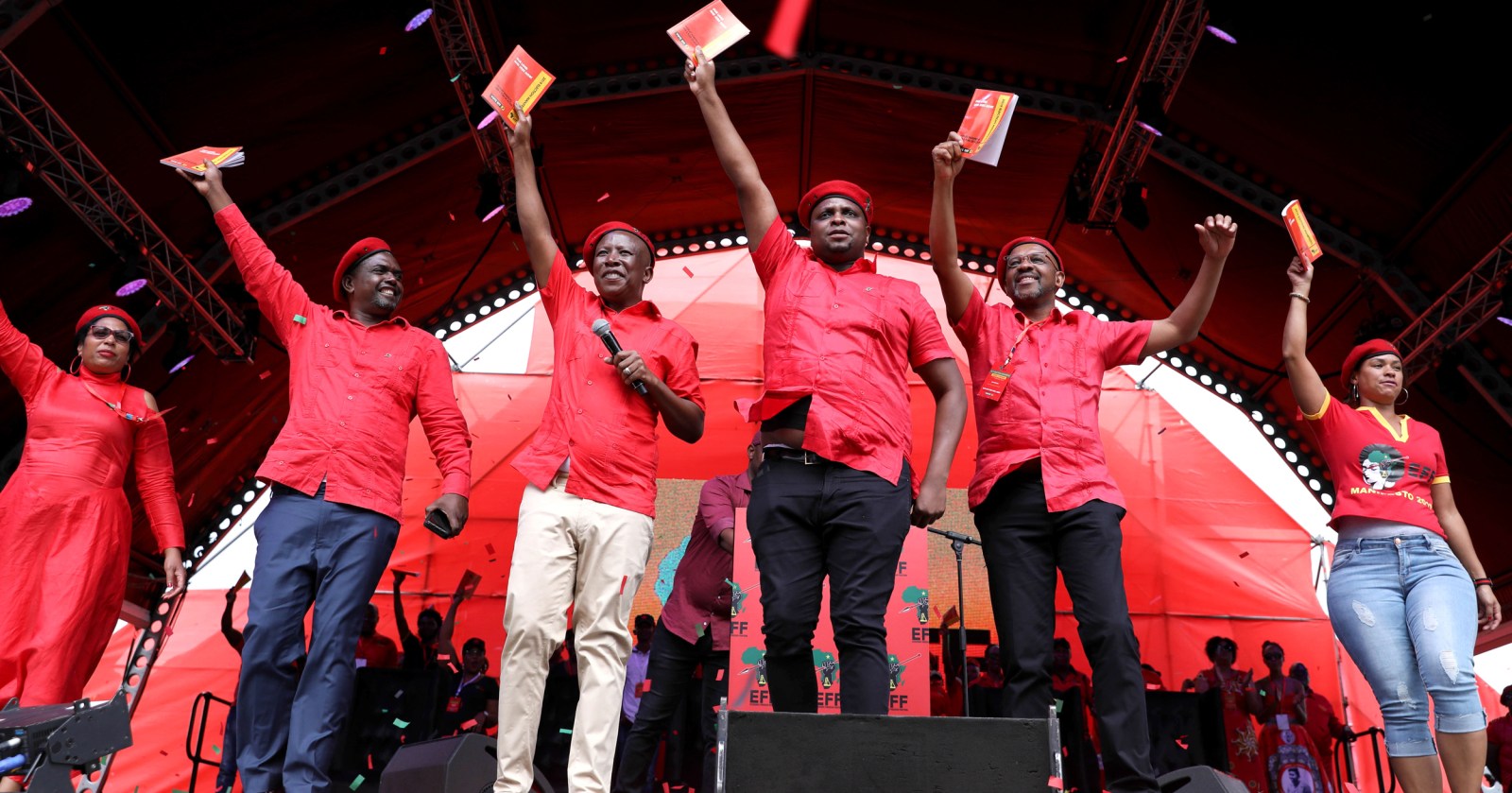 One of the measures an EFF government would introduce would be compulsory critical thinking classes for all South African high school learners. It’s a pity that particular proposal can’t be fast-tracked, because it only takes a small measure of critical thinking to reveal the flaws in the EFF’s election manifesto. The promises it makes will be appealing to many – but the impracticality of the EFF’s pledges make the manifesto a fundamentally dishonest document.

The launch of the EFF’s 2019 election manifesto, however, reveals that the Freedom Fighters have broken with this unspoken social contract altogether.

Despite the length of the document – 170 pages – the manifesto is filled with unforgivably vague pledges, sketching the picture of a healthy, educated, employed and happy South Africa zipping along at 10% economic growth with no plausible detail as to how this can actually be accomplished.

On countless occasions within the manifesto, the party airily says it will affect the changes it proposes by “introducing legislation” or “passing a special bill” – when in fact the transformation envisaged by the EFF is so far-reaching that it would effectively require tearing up the Constitution.

At other points, the party does not bother to flesh out any details whatsoever as to how something may be achieved.

“The EFF will fight African leaders who want to stay in power forever,” the manifesto states.

Would that involve personal fisticuffs from Julius Malema, or the deployment of South African troops to the relevant despot’s door? It’s unclear.

Where the manifesto does specify detailed policy proposals, they are almost uniformly hellishly expensive. Even the world’s most developed and socially-conscious economies are not able to provide their citizens with what the EFF is promising.

Here follows a sanity check on just a few of the EFF’s proposals:

In 2017, South Africa imported $7.8-billion in agricultural and food products – in large part because the country does not currently produce enough rice and wheat to feed its population.

If the EFF bans the import of grain, where will the food come from? The manifesto says that feeding the country through only domestic produce will be achieved “through the intensification of small-scale farming and agriculture and by giving strategic support to all small-scale agricultural operations”.

That’s all well and good, but one of the reasons why South Africa’s grain imports have been rising is due to the lingering effects of drought on domestic agriculture. Even the EFF stops short of claiming it can control the weather.

As of January 2019, there were around 13 million learners currently enrolled in South African schools. Under the EFF government, it will be compulsory for all 13 million to “pursue post-secondary education and training at universities, universities of technology and TVET colleges”.

The EFF will, therefore, need to guarantee 13 million jobs for this cohort alone. Although the party is planning to establish a wide range of new state-owned institutions, including a state-owned pharmaceutical company, guaranteeing jobs for everyone “relevant to their qualifications” is simply impossible.

The EFF government will equip every South African school with the following: two grass fields, two pitches, a swimming pool, driving schools, an in-house orthodontist, free tablets for every learner, at least two physical education teachers, free scholar transport for all learners who stay more than 2 kilometres from the school – and more.

The South African government already spends 15% of its total budget on education – a higher proportion than the US, UK and Germany – with notoriously weak results. While inadequate school infrastructure undoubtedly plays a role, there are other significant factors involved related to teacher morale and training, administrative problems, and the contentious South African Democratic Teachers Union (SADTU).

Consider the EFF’s intention to supply each school with an orthodontist. There are currently around 30,000 schools in South Africa, excluding the new ones that the EFF also intends to build. As of 2017, there were 160 dental specialists practicing in the public sector in the entire country.

That’s 24,000 too few to service every South African school, even if they were all corralled into the public sector in one fell (authoritarian) swoop.

The EFF government will abolish fees for higher education, cancel all student debt, provide students with free accommodation, two free meals a day, free public transport and a free laptop, while tripling the amount of research funding available to universities.

It is already clear that NSFAS is buckling under the strain of providing fee-free higher education for poor households as introduced by former president Jacob Zuma, with the World Bank warning in January that this situation is untenable and should be replaced with a system of income-contingent loans.

The EFF is proposing not just to feed, house, transport and further educate every school-leaver in the country (over 700,000 in 2018). It will also provide “scholarships to study at overseas universities for postgraduate qualifications”, which will cost around R350,000 per student per year for the cheapest options, and up to around R1-million per student per year for a university like Harvard.

In addition, all black graduates pursuing doctoral studies will receive R1-million each.

Where will the EFF find the money for all this? Your guess is as good as theirs.

This is one of the EFF’s manifesto promises which is likely to win popular support. The South African government currently spends almost R200-billion per year on social grants for 17 million people, and its struggle to maintain this level of funding was one of the contributing factors to the rise in VAT.

If there was money available to dramatically increase social grants, you can be pretty sure that the ANC government would be doing so. There isn’t.

The EFF government will create a Sovereign Wealth Fund that will, among other things, partner with foreign direct investors with the clear purpose of maximising job creation.

The manifesto’s mention of attracting foreign direct investment is one of its most laughable aspects.

Which foreign investors in their right minds would want to compete with the EFF’s highly-protected state-owned entities, pay the EFF’s massive sectoral minimum wage hikes, and be banned from owning land? Which investors would want to comply with the EFF’s authoritarian decrees affecting the private sector, including the law that all asset managers place a minimum of 30% of their investments in the local economy?

EFF supporters may claim that the party’s manifesto merely sketches a vision of an ideal society, rather than proscribing set-in-stone policies that the party should be expected to adhere to. That’s one way of looking at it. Another is that the EFF leaders are knowingly selling pie in the sky to an increasingly desperate electorate.