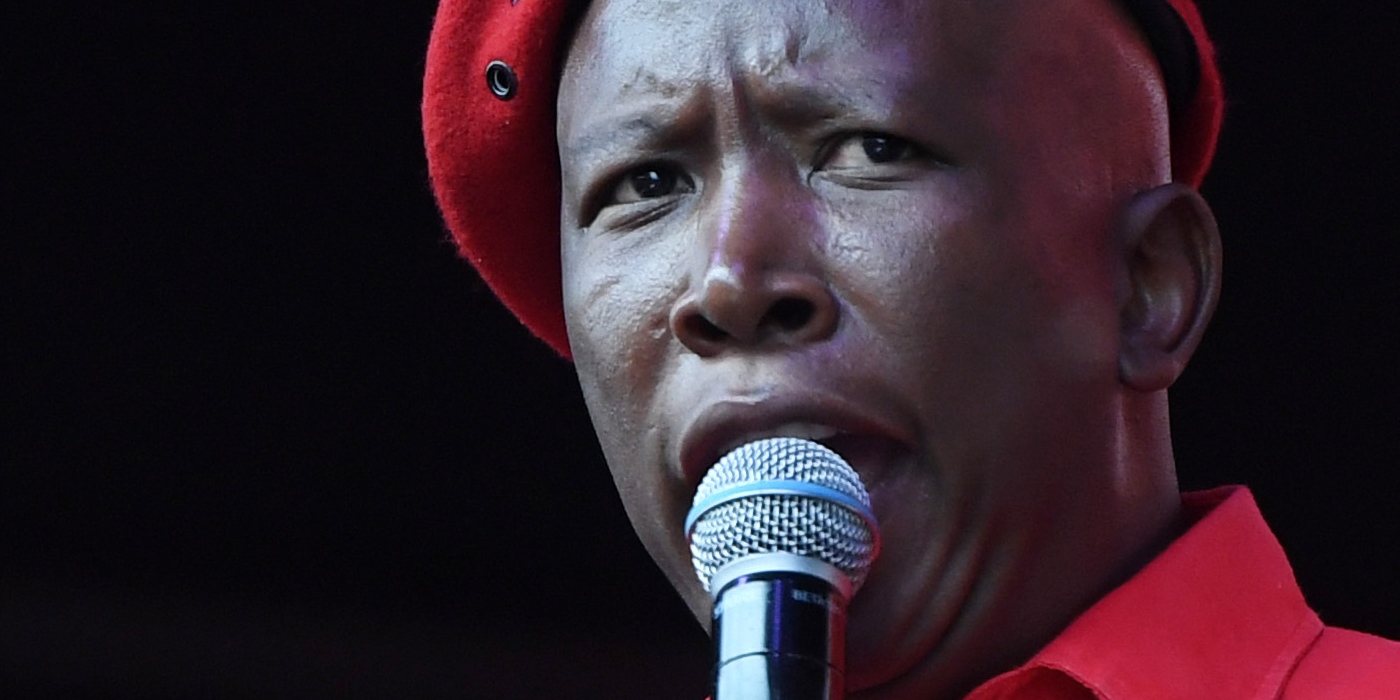 Economic Freedom Fighters (EFF) party president Julius Malema addresses supporters during the far-left opposition party's official 2019 presidential elections manifesto launch at the Giant stadium in Soshanguve outside Pretoria, South Africa, 02 February 2019. South Africa is due to hold its 5th free and fare elections since the end of Apartheid in May 2019. The official date of the elections is still to be announced. EPA-EFE/STR

Most of the election promises made by Economic Freedom Fighters leader Julius Malema were taken straight from the wish lists of his many disaffected supporters, but he ended his speech on an unusually counter-populist note. On foreign policy, his party’s manifesto goes against the grain.

Like a black Father Christmas with a red beret, EFF leader Julius Malema delivered a 166-page election manifesto full of promises — or commitments, in the unlikely event that the EFF is in power after the 2019 general elections in a few months’ time — appealing to the most disaffected in the community.

His talk of much higher wages, a doubling of social grants, free education, and a stance against ANC corruption are people-pleasing vote-scorers. He even had something in his bag for immigrants: A South Africa free of xenophobia.

The crowd on Saturday filled the stands and part of the pitch of the cosy Giant Stadium in Soshanguve, about 25 minutes’ drive north of Pretoria. The red sea of T-shirts was mesmerised, thrilled and highly disciplined, and roared approvingly in all the right places throughout the speech — in contrast to the polite applause on the stands of the giant Moses Mabhida Stadium in Durban where ANC president Cyril Ramaphosa read off his middle-of-the-road elections manifesto to the party in January 2-19.

Whereas both the ANC and the DA took the seemingly populist stance of tightening immigration controls to prevent undocumented foreigners entering the country (where locals accuse them of stealing jobs and women), Malema took the leap to call for a borderless Africa. Zimbabwe, Mozambique, Botswana, the DRC is our home, he said.

“We were divided by those who imposed borders on us. Those borders were imposed on us by the colonisers. We are one people,” he said.

Addressing them as “fighters”, he told his supporters, “let us not be too local, let us be international. We exist in a globe, let us not be too isolationist”. These are rare words by a political leader to South Africans, known as a nation of uninterested navel-gazers with a protectionist attitude towards their relative economic prosperity, and who are so overcome with problems of their own that they struggle to look outward. Instead, there are sporadic bloody attacks and looting of shops belonging to immigrants, and on those considered to be criminals and drug dealers in communities where police fail to act.

“Let’s stop xenophobia,” he said, “let’s stop self-hate. If you attack others, you don’t love yourself.” He said, to loud cheers, that the resources of Africa should benefit Africans, and not “white people”.

“Any African, a Nigerian, a Ghanaian, all over. The pain of Africans is our pain,” he continued. He said Africans were suffering in the diaspora worldwide:

“When they come back home, you still make them suffer. Why? What did those Africans do to you? Let us protect one another, let us love our continent. Let Africa one day realise its own freedom, let Africa one day stand on its own feet,” he said to more loud cheers.

Malema thundered out his tough stance against xenophobia towards the end of his speech, and it stuck.

“I was so impressed when he mentioned in his speech that we must stop fighting with Zimbabweans and all the blacks in Africa, that was important,” a middle-aged supporter said. Another said it didn’t matter if this issue lost the EFF a few votes, because “we would rather have fewer votes that are filled with love and self-realisation, than more votes that are mentally enslaved. Pan-Africanism says we are one”.

Malema’s party has, however, not been consistent on this issue throughout. His deputy, Floyd Shivambu, has by way of attacking them, questioned the nationality of former minister Malusi Gigaba as well as of former president Jacob Zuma’s children, Duduzane and Duduzile, born in exile in Mozambique.

Malema’s welcoming attitude is narrow and limited to black Africans only: No struggle narrative of rainbow-nation-ism or any leeway for those who identify as black. He previously attacked detractors such as minister Pravin Gordhan in a racist manner, saying Gordhan was part of an “Indian cabal”. Malema hinted at this again when he attacked newly appointed prosecutions boss Shamila Batohi.

In remarks during Saturday’s manifesto speech aimed at instilling unity as opposed to tribalism, Malema spoke along racial lines:

“Let us be one thing. We are all from South Africa, we are black, we are Africans. South Africa is one under one president, under one government and that government must deliver to all. Not to Zulus, not to Xhosas, not to Pedis, not to Vendas, but to black South Africans. Let us unite our people,” he said.

So what did Malema want to achieve? His admonishment on the xenophobic attacks was not entirely aimed at a local audience, as he switched to English when he made this part of his speech (much of his 90-minute speech was in Setswana and Pedi).

Shivambu at the beginning did introduce Malema as an African leader, and he is well known in much of the continent. Was it perhaps aimed at the international and immigrant community, of which some — perhaps a couple of hundred thousand Zimbabweans, for instance — have been here since the 1990s and are able to vote? Many others are close to or married to South Africans, and might influence their vote.

Whereas the EFF’s manifesto is encouragingly idealistic — to “fight for a borderless Africa and a single currency in the medium to long term” — it doesn’t, however, address the other short-term problems many immigrants face with a corrupt home affairs department or slow borders. Most immigrants can’t vote, so there hasn’t been as much progress as, say, in the application process for identity documents.

Chairman of the African Diaspora Forum Vusumuzi Sibanda said many of the xenophobic attacks happened in a context of government not delivering or governing properly, which meant the ANC and the DA have had to shift the blame to immigration controls, away from their own shortcomings.

Malema doesn’t have that baggage. He might be trying to appeal to young students, who, Sibanda said, would identify with Malema’s pan-Africanist views.

“Malema might not get the number of votes he wants now, because of populists selling the cheap thoughts, but he is looking at the long-range view,” Sibanda said. Electronic copies of the EFF manifesto were already doing the rounds on WhatsApp groups of Zimbabweans living in South Africa.

Daniel Kinnear from Africa Insights, however, said it is quite possible that the EFF knew it was treading water, and was now throwing the net as widely as possible for votes. Polls done by Africa Insights show that the EFF would poll between nine and 14% in the upcoming elections, which is not close to the government take-over the party had been hoping for.