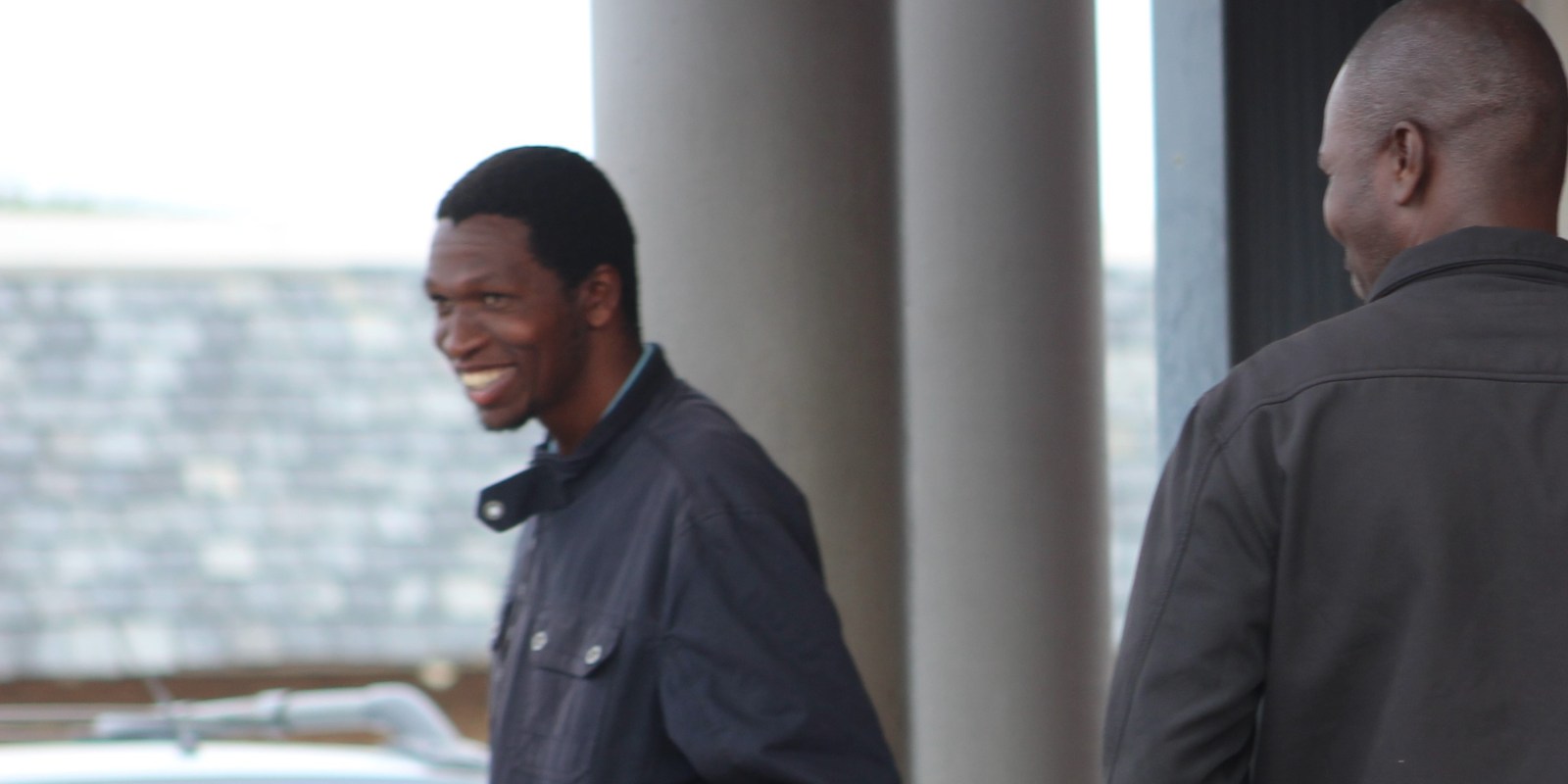 Alleged rhino poacher Muntugokwakhe Khoza (back turned to the camera to avoid being photographed) and his smiling co-accused Ayanda Buthelezi leave the Richards Bay Magistrates Court in 2018 during one of his many court appearances over the past decade. Picture: Tony Carnie

How long does it take the criminal justice system to finalise a rhino poaching trial, especially when a suspect is allegedly caught red-handed? A year. Two years. Perhaps a little longer? Well, in the case of Muntugokwakhe Khoza, the answer is almost 10 years... and counting.

The man from the Ulundi district in KwaZulu-Natal was arrested at a roadblock on 26 August 2009, allegedly in possession of two blood-covered rhino horns and a .303 rifle, just a short distance from the Hluhluwe-Imfolozi Park where a white rhino cow was butchered for its horns a few hours earlier.

Khoza and two alleged accomplices, who have all pleaded not guilty to the crime, were due to appear for the resumption of their trial at the Durban Magistrates’ Court on Friday, 1 February 2019, but the trial was delayed once more.

During this period, more than 7,500 rhinos have been slaughtered nationwide for their horns in the country that remains custodian to the largest — but rapidly dwindling — population of rhinos in the world.

The investigating officer has since emigrated, along with the wildlife officer who arrested Khoza, while other witnesses have become too ill to testify or can no longer be traced.

The latest pause in proceedings follows a series of delays that have bedevilled the case for nearly a decade.

Delays have been attributed to a variety of factors, including difficulties in securing private legal representation repeated changes to the legal defence team, alleged illness of some of the suspects and technical challenges or difficulties in co-ordinating suitable court dates for three suspects and their lawyers.

A fourth suspect arrested at the scene — but out on bail — also disappeared at some point during the decade-long court proceedings.

And Khoza, also out on bail, was arrested at a second roadblock in the Vryheid area in March 2013 with another pair of rhino horns in his vehicle.

Almost a year later, Khoza was tried and convicted for illegal possession of this second pair of horns — but somehow managed to stay out on bail for the first arrest after serving part of his six-year jail sentence for the second horn arrest.

He returned later to the Richards Bay Magistrate’s Court for the resumption of his first trial, but in August 2018 he jumped bail.

A few weeks after disappearing he was arrested for a third time, this time for allegedly trying to kill more rhinos at a private game reserve in the Paulpietersburg area.

This time, however, Khoza and four companions came face to face with a very angry white rhino cow defending her young calf.

According to the reserve owner, the cow charged the alleged poachers who then opened fire, injuring two of the rhinos before taking refuge in a nearby river bed.

But a group of farmers were lying in wait on a nearby hill with night vision equipment that enabled them to spot the poaching gang. The local police and nearly 50 local farm-watch neighbours were quickly alerted to draw a security net around the reserve and Khoza and his companions were arrested, along with a woman allegedly hired to drive a getaway car.

Police also seized three rifles, some allegedly stolen during a farm attack in the Ermelo area.

But, almost inevitably, there was another “logistical” delay relating to authorising a Legal Aid defence attorney to be paid for his services in a different magisterial district.

The trial is now set to resume later in 2019, but court officers were not able to confirm the exact date when contacted on Friday evening. DM