Writing the Election 2019: Electorate bombarded with pleas, promises and contradictions 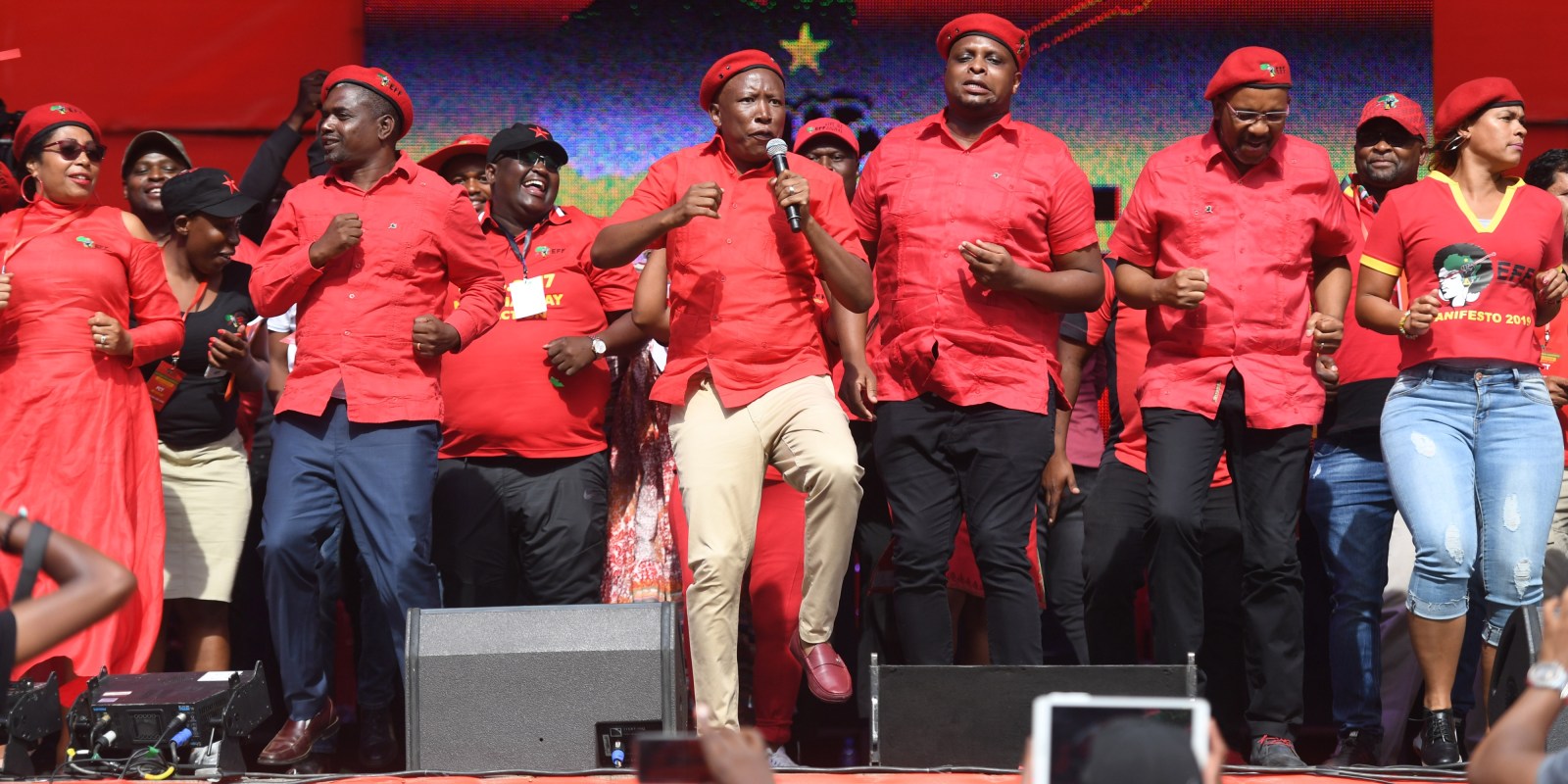 Economic Freedom Fighters (EFF) party president Julius Malema (C) and the rest of the party leadership during the far-left opposition party's official 2019 presidential elections manifesto launch at the Giant stadium in Soshanguve outside Pretoria, South Africa, 02 February 2019. South Africa is due to hold its 5th free and fare elections since the end of Apartheid in May 2019. The official date of the elections is still to be announced. EPA-EFE/STR

The EFF manifesto promised the establishment of 37 ‘economic zones’ in all provinces across the country. Companies which invest in these economic zones ‘will be exempted from paying tax’ provided they commit to creating at least 2,000 jobs. In short, create at least 2000 jobs, and the tax laws of the country will not apply to you. This has distinct echoes of neoliberal economic policies that established Export Processing Zones and Special Development Zones in places around the world, including the Mexican Maquiladoras.

At the best of times, the electorate are eternal optimists. They enter elections with clockwork regularity, believing each time that this time would be different. They believe that the people they elect would (this time) actually get it right, and deliver on the promises they make. At the worst of times, the politicians pray that voters would, actually, believe all the promises they make.

Meanwhile, politicians know very well that they cannot be held accountable, at least not legally, for not keeping their election promises. Promises made by politicians during elections are not legally binding. Also, once elected, politicians have added protection: they can always blame legislative opposition or some institutional binding constraint for their own failures.

Under some conditions, this letdown can lead to a type of negative expectancy disconfirmation – when people are simply disappointed by the politicians for whom they voted, and turn on all politicians. We have seen this disappointment with the ANC turn into general apathy among voters. This is when politicians return to hope, fear, blame, fresh promises – and appeals for “another chance”. The ruling ANC have turned to this appeal for “another chance” to set things right.

For the better part of the past 10 years, the ANC and the State (the elision between the two almost complete) have hopped from one disaster to another. The new leader of the ANC, Cyril Ramaphosa, has acknowledged this, and has appealed to loyal members and supporters to give the party another chance. What he has shown, in the past year, is that he actually has the power and ability to clean up the state, but less so his own party, which sometimes seems to be at war with itself.

Nonetheless, over the past 12 months, several processes have got underway to clean up the state and restore the credibility of cornerstone institutions. Such is the scale of graft and maladministration that it is impossible for any real justice – in the form of prosecutions for corruption – and a complete reset of the state to take effect. In other words, it’s difficult to see any arrests and prosecutions within the next three months, before the next election.

The silver lining is the arrival on 1 February of Shamila Batohi as new National Director of Public Prosecutions. One of her earliest statements was a shot across the bow that suggested that the next several months, and probably years, will bring us a barrage of depositions, amid a scramble for safety – with the sibilance of shredders providing background music.

Batohi has made it clear that State Capture allegations would receive “immediate” attention.

“Perpetrators of crime and corruption within the state and private sector, regardless of who you are, where you are, how rich you are, your days of acting with impunity are numbered,” Batohi said.

If Batohi is allowed to do her job, she may bring the miscreants to book. As it goes, there has been criticism that the Zondo Commission has had no legal effect, in the sense that it has not resulted in prosecutions. It is too soon to say whether prosecutions (by the state) will be enough to restore faith in the ruling ANC. The opposition will, as they should, focus on the fact that State Capture was the defining feature of ANC leadership over the past decade or more. There is no getting away from that.

The EFF are like a bit like a cyborg. Their humanity may rot and fall from their body like carrion, but the cold steel of their politics of revenge seems to be increasing their following. But, the EFF seem to be gaining momentum. Over the past weekend, they provided some substance to what they would do if they were to be victorious in the next election. With their election manifesto, the EFF presented a variant of Khmer Rouge land reforms, the abolition of private ownership and of rental, with an apparent volte-face that “demographically representative” land ownership would ensure that most of the land in the country would be owned by black people. It is not clear, in other words, whether the state would own all land – thus eliminating private ownership – or whether black people would own land under “demographically representative” policies. We should probably provide the EFF time to provide clarity.

The biggest contradiction, which probably underscores the ideological confusion of the EFF, is the coupling of early Soviet and Khmer Rouge land redistribution and abolition of private property with a neoliberal economic policy expressed in various parts of the world as Export Processing Zones, Special Development Zones or Mexican Maquiladoras where women’s menstrual cycles are monitored and where they are dismissed for being pregnant.

The EFF manifesto promised the establishment of 37 “economic zones” in all provinces across the country. Companies which invest in these economic zones “will be exempted from paying tax” provided they commit to creating at least 2,000 jobs. In short, create at least 2000 jobs, and the tax laws of the country will not apply to you.

This concession seems similar to EPZs around the world. The EFF would probably do their followers a service if they introduced them to the Jamaican free zones that Jamaica Kincaid and Stephanie Black so eloquently captured in the documentary Life and Debt in 2001.

While the EFF toned down significantly their vengeful and vituperative politics, the substantive issues may capture the imagination of disaffected voters who could not bring themselves to vote for the ANC – again. They cooked Aristophanes’ pleasing savouries to win people. The EFF confirmed that all land in the county would be nationalised and held in custody by the state. In other words, there would be no private property. There is some contradiction in this position, the EFF having stated that “the EFF government will abolish rentals in all residential land”.

An EFF government would distribute a minimum of 50% of the land to be controlled by women and the youth. Under an EFF government, women would get tribal land – without consideration of marital status. This redistribution would be managed by a people’s land council to manage and redistribute land to all those who need it for residential and productive purposes. Contradictions aside, for the EFF there is no intervening variable between land ownership and “eating”. If you had land, so the logic presents itself, your hunger would be quelled and you would “eat now”, according to the EFF.

The DA, meanwhile, are in danger of becoming a postscript in South African politics over the coming years, if they continued to exist solely as opposition to the ANC, and more recently to the EFF. It does not help, of course, that one of the DA’s election posters in Cape Town has a curt and clear message.

“Register to keep the ANC & EFF Out of the Western Cape”. Below the message is a simple statement: “Vote DA”. They too have made promises that may be hard to keep.

To be fair, it is not inconceivable that a putative DA government would provoke the EFF into “cutting the throat of whiteness” (which they so successfully executed in Nelson Mandela Bay). The ANC would also invoke the spectre of apartheid, which is just jibber-jabber.

The point is that each of the three big parties is making pleas and promises. The ANC is asking for another chance to fix things, as it were. The DA want to be the next government, and promise to do better than the ANC have done over the past decade – which should not be too difficult. The EFF have promised increases in social security, free education and tax-free zones for corporations….

The EFF are the only party that cannot lose. They have a unique set of excuses for when any of their policies fail or when the wheels come off an EFF government. For as long as there are white, Indian or non-African people in the world, the EFF have an excuse. For now, we wait for the announcement of the election date. There is a possibility that the President will announce the date in his State of the Nation Address. As for the election, we will have to wait and see whether this time will be different. DM