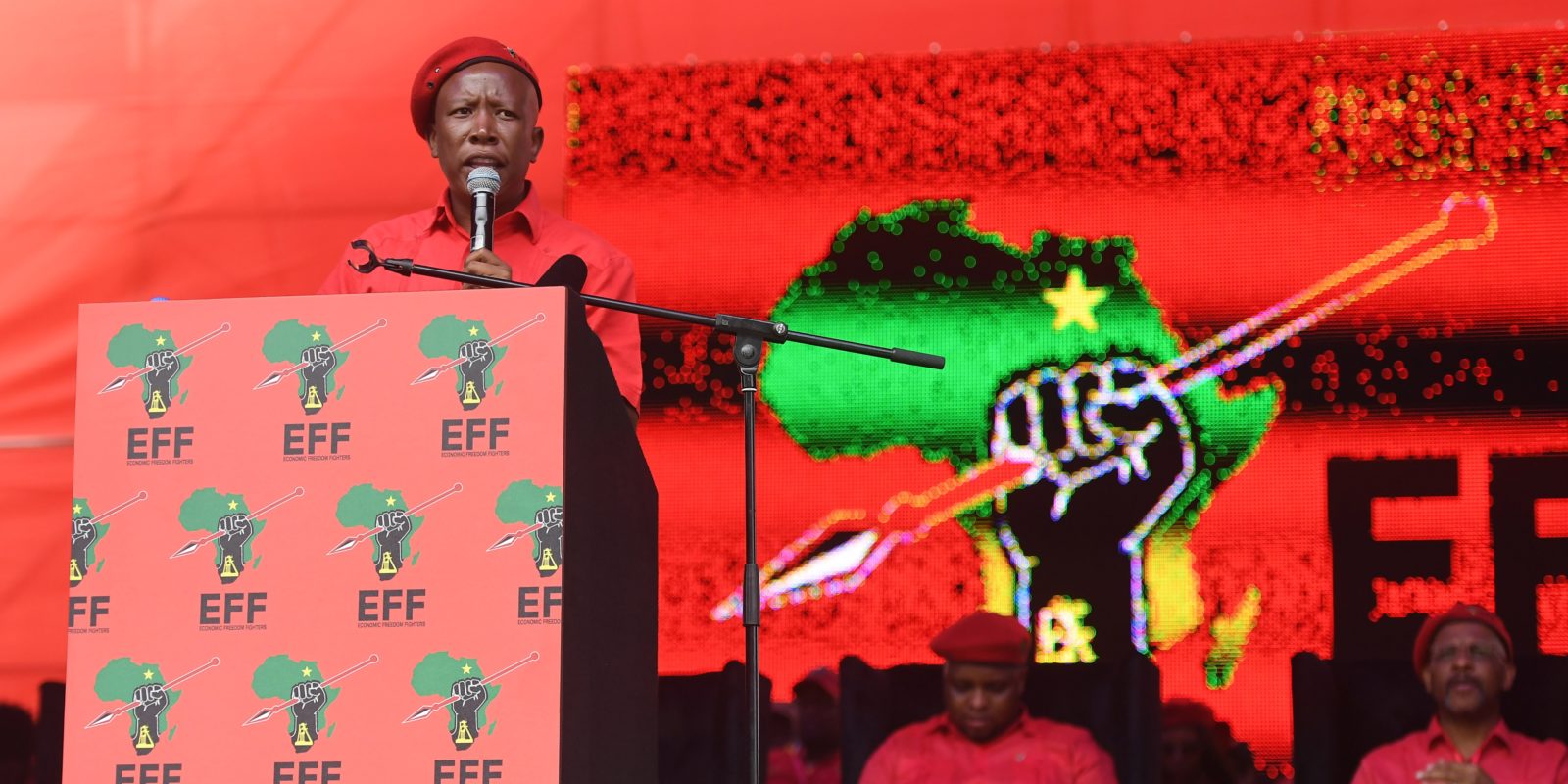 Economic Freedom Fighters (EFF) party president Julius Malema addresses supporters during the far-left opposition party's official 2019 presidential elections manifesto launch at the Giant stadium in Soshanguve outside Pretoria, South Africa, 02 February 2019. South Africa is due to hold its 5th free and fare elections since the end of Apartheid in May 2019. The official date of the elections is still to be announced. EPA-EFE/STR

EFF supporters who travelled to the Giant Stadium in Soshanguve on Saturday – for the five-year-old party’s 2019 election manifesto launch – were forgiving about the recent alleged transgressions of the party’s leadership. They focused instead on the EFFs ability to ‘talk to the heart’ and give them hope.

At 7 am on Saturday, a bus filled with EFF members, young and old, left Joubert Park in Johannesburg, passed through Braamfontein to pick up students and made its way to Giant Stadium in Soshanguve for the party’s election manifesto launch.

The bus on the two-hour drive was filled with jubilant singing, about the fierce leadership of party leader Julius Malema and about the corruption of the ANC government. The young danced and chanted the whole way there, while the old sat quietly, often taking naps.

One woman asked the bus driver to stop along the side of the road so that her five-year-old daughter, wearing a red T-shirt with “Juju’s Kid” written on the back, could go outside and pee.

As the bus entered the drive-through into Giant Stadium, EFF members from across the country formed a long queue of buses, cars and pedestrians as they fought for space on the road. On the roadside was an equally long row of street vendors selling EFF merchandise, from T-shirts, hats, flags, and face stickers to access tags.

As EFF members from across the country entered the Giant Stadium in Soshanguve, each was handed a Red T-shirt with the slogan “Our Land and Jobs now” and a lunch pack with fruits and juice.

The event was scheduled to begin at 10 am, but the stadium was only half full – and as African time dictates, the programme starts when the time is right.

Crowds danced their way into the stadium, singing and chanting, with some taking selfies while brandishing their uniquely designed EFF regalia. Almost everyone had their phones out, recording on video what appeared to be their once-in-a-lifetime event.

As they took their seats, singing crowds were silenced by deafening music from the EFF’s Jazz Hour album played through the big loudspeakers. Party spokesperson Mbuyiseni Ndlozi could be heard singing “Sihamba no Malema” – we are going with Malema – to a half-empty stadium as organisers waited for it to fill before proceedings began. A few more songs followed after that, all paying homage to the Commander in Chief, Julius Malema’s bravery and fierce leadership.

Thabe Mogoboya, an EFF member from Pretoria West, came to listen to Julius Malema, although he did not think a new manifesto was necessary. To him, the party’s seven cardinal pillars are enough to carry the party through elections.

According to Mogoboya, the EFF has accomplished a lot. When he voted for the party in the 2014 national and 2016 local elections, it was with the hope that the party would remove former President Jacob Zuma and return the land to black people. All of which, Mogoboya says, is what the party has been fighting for in Parliament.

Mogoboya was drawn by the EFF leader’s ability to “talk to the heart”. And although he is aware that Julius Malema does not have a good history in the ANC, he has come a long way since then to “conscientise black people” about the struggle.

Junior Sibiya travelled from Tembisa in a bus organised by her branch to listen to Malema announce the manifesto for the party. She has been a member of the party for four years and has voted EFF since it came to the political scene. For Sibiya, Malema is not afraid to say the truth, unlike other politicians.

“He is not afraid to face white people,” said Sibiya.

Furthermore, Sibiya says it was the policies of the EFF that attracted her to the party, especially regarding land expropriation without compensation. With a diploma in food technology, Sibiya says she has found herself working in a job she does not like, in factory packing circuit breakers. She believes Malema will change things in her life.

Lebo Mahoola, also from Tembisa, who came with Sibiya dressed in matching EFF garb, says that since she voted EFF in 2014, the party has brought free education and is in the process of bringing back the land. For Mahoola, Malema says what he wants and is not a liar like those in the ANC.

“They are afraid of talking about the truth, they were afraid to challenge President Zuma,” said Mahoola.

By 11h30, the EFF jazz hour playlist was still on repeat. Dlozi could be heard singing revolutionary songs about the struggles of black people and how Malema would lead the way to victory.

When Letabo Mantjane was an ANC member, he lost faith in the party because “they say the same thing”, but always fail at implementation. He came to a point where he said to himself “enough is enough”.

“Malema is a natural-born leader, he does not shy away from the truth, he calls a spade a spade,” said Mantjane.

By 1.30 pm the stadium was filled to capacity and the programme officially began. After some brief introductions of lesser-known EFF provincial leaders, party deputy president Floyd Shivambu made a colourful introduction of Malema to a roaring crowd.

Malema delivered a fiery speech which touched on raising the minimum wage, lowering the high cost of data, eliminating pit toilets, providing housing and free education. He also said ANC officials implicated in the Zondo commission should be arrested. He voiced his suspicions on bias in the media and about the new NPA head Shamila Batohi’s association with Pravin Gordhan.

“A lot of things they said makes sense, only if we can stop corruption,” said Innocentia Thipe, an office manager.

Malebo Maditle, an office administrator, considered Malema’s speech “brilliant” and said it spoke to her heart. In her experience, she said, the young and hip leaders of the EFF have made political leaders accessible and responsive to people’s problems.

Maditle says she was once overcharged for water, which she took to the EFF. Party members helped her solve the issue and afterwards followed up with her on the problem. When asked why she supported the EFF, Maditle answered that the party gave her hope.

Regarding recent reports on EFF’s involvement in the demise of the VBS bank, Maditle believes there is no evidence that supports the allegations. If proof is provided she will no longer support the party.

Sibiya says Malema has asked the media to furnish proof — since no one has brought any to light, it means there is nothing linking the EFF to the VBS heist.

According to Magoboya, there is minor corruption in every party, especially for a small party such as the EFF that does not have funders. And the media is unfair on the people who are not funding them, like the EFF, while protecting Pravin Gordhan, says Magoboya.

Magoboya says the media coverage of the VBS scandal has been skewed against the EFF. He says many ANC councillors are directly connected to the scandal, which has not been written about. The media instead focused on Floyd Shivambu’s brother, who is not in the leadership of the EFF, said Magoboya.

Thipe acknowledges that corruption is something the young EFF leaders learnt from the ANC, and since it has been exposed they will probably not do it again.

“We must not lose hope, they are giving us hope,” said Thipe. DM