South Africa stays on the sidelines of Zimbabwe crisis 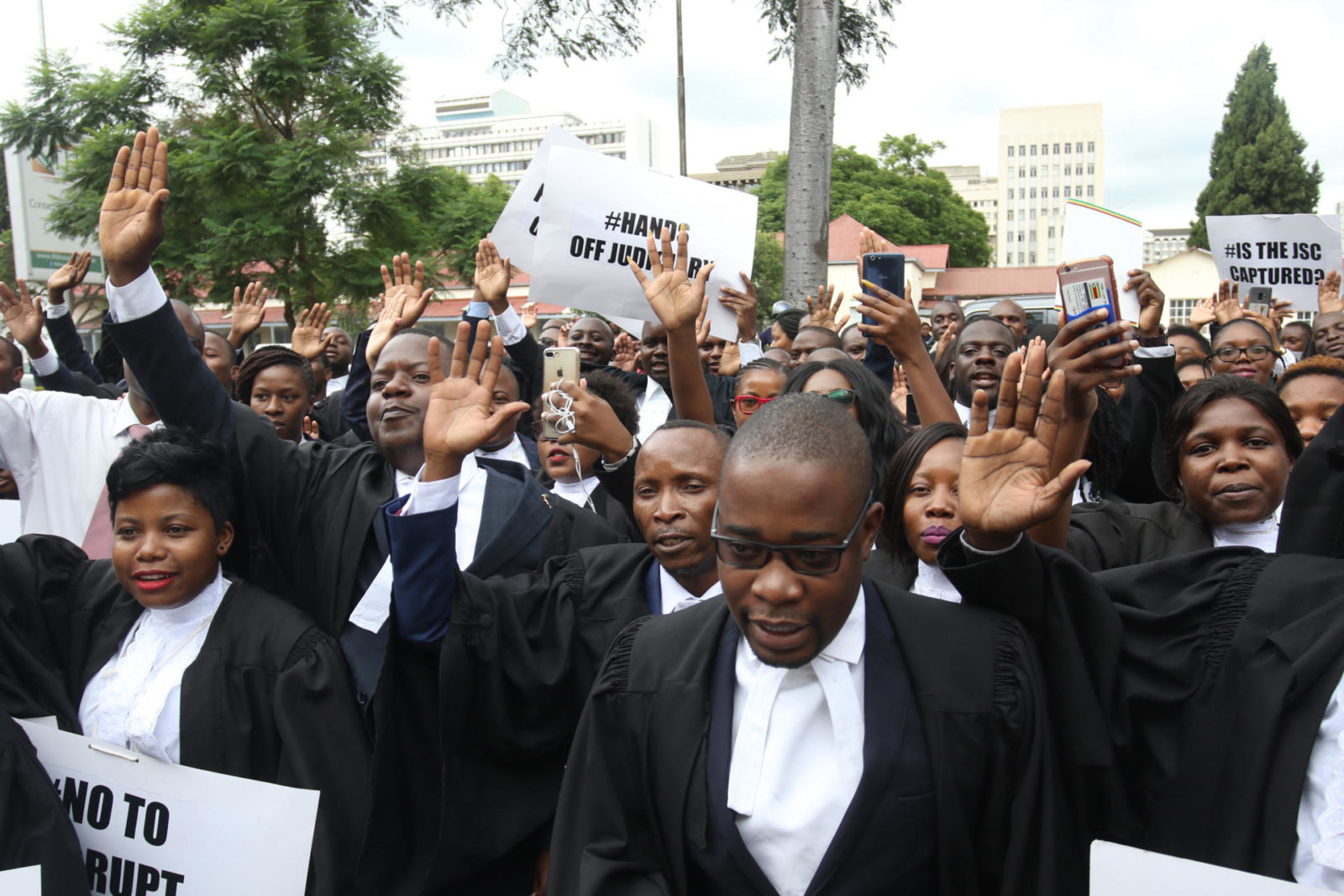 Hundreds of Lawyers with placards take part in a march to demand the restoration of the rule of law and human rights in Harare, Zimbabwe, 29 January 2019. EPA-EFE/STF

Any bailout must come with strict conditionality – mainly political – that Pretoria is still reluctant to impose. By Peter Fabricius for ISS TODAY.

Almost two decades after the start of the Zimbabwe crisis, South Africa is once again standing silently on the sidelines, seemingly mesmerised, as its northern neighbour bashes opposition heads indiscriminately, shuts down the internet to stifle criticism, and spins out of economic control.

Emmerson Mnangagwa’s “new Zimbabwe” that promised so much change now almost completely resembles the old Zimbabwe of Robert Mugabe whom he ousted in a “military-assisted transition” (aka coup) in November 2017. At least 12 citizens have died in the wake of a 150% petrol price hike that sparked a national strike and street protests. Security forces put down the civil action with live ammunition.

Pretoria’s only political comment has been to call on the international community to lift sanctions against Zimbabwe. That is particularly bizarre since Mnangagwa began his rule by telling Zimbabweans not to blame sanctions for the country’s ills.

Is there anything, though, that Pretoria could do, or could ever have done, that would have persuaded a Zimbabwe African National Union-Patriotic Front (ZANU-PF) government to turn away from the path of self-destruction?

The one thread running through all Pretoria’s intervention attempts is an almost exclusive focus on economic remedies, as though it were dealing with a well-intentioned neighbour that was just short of a buck.

Some observers suggest this is not charity and is really a way for Pretoria to bail out South African Airways. Zimbabwe owes the national airline US$65 million because it has been accepting payments from Zimbabweans in bogus local currency rather than US dollars.

Pretoria is also trying to help Zimbabwe relieve itself of its external debt – estimated at some US$7.4 billion – to international financial institutions and governments.

Treasury officials say South Africa has declined a request from Zimbabwe for a US$1.2 billion bailout. Other officials haven’t ruled out the possibility of South Africa contributing to a wider effort by Zimbabwe’s foreign friends to ease or even forgive this debt.

Either way, success would require instilling much greater confidence in Zimbabwe than most creditor institutions and governments seem to have now. Yet Pretoria seems to be doing nothing to dissuade ZANU-PF from sabotaging the possibility of gaining such political confidence by its political actions.

Piers Pigou, senior consultant to the International Crisis Group, believes, “It’s an act of self-delusion if you think you can avoid talking politics as you engage Zimbabwe economically, as in many other places.”

He says for almost two decades South Africa has quietly been pumping money into Zimbabwe with little fanfare and even less to show for it in economic performance or political stability. South Africa has been trying in vain to introduce economic reforms – such as persuading Zimbabwe to join the rand economic area to tackle its pervasive currency crisis.

Opposition politician Tendai Biti, finance minister in the joint ZANU-PF-Movement for Democratic Change (MDC) unity government from 2009 to 2013, told ISS Today this week: “They (SA) should push for a political solution rather than a bailout to a rogue state. They should call for an extraordinary summit of (the Southern African Development Community).”

The five key items on the agenda, he says, should be discussions of legality; political and institutional reforms, including media, legal and constitutional reform, focused on “decapitating the two evils of state capture and militarisation of the state”; economic reforms; reconstruction of the state, focusing on national cohesion, transitional justice and restoration of the social contract; and reintegrating into the international community, ending isolation.

But South Africa seems unwilling to put any sort of pressure on Zimbabwe to make political reforms. This stems largely from the seemingly unshakeable historic solidarity among former liberation movements, coupled with a deep suspicion of supposed “regime change” agendas of Western countries criticising or sanctioning Zimbabwe.

This week South Africa’s opposition leader Mmusi Maimane declared that Mnangagwa’s New Dawn was “simply an act of window dressing designed to keep the power and patronage in house”. In Zimbabwe, “the ANC has chosen oppressors over the oppressed. This is because (Cyril) Ramaphosa and Mnangagwa are cut from the same cloth”.

He announced he would “immediately pursue a set of … interventions to resolve the current crisis occurring in Zimbabwe”. These would include visiting Zimbabwe to meet Biti, MDC leader Nelson Chamisa and others to seek practical solutions to the crisis.

He would also ask the Prosecutor of the International Criminal Court to request an investigation into the conduct of the Zimbabwe government; the United Nations Commissioner on Human Rights to intervene; and Parliament to debate the impact of the violence by Zimbabwe’s government on South Africa.

It’s election year in South Africa, so it’s easy to dismiss Maimane’s initiative as grandstanding. Nonetheless, he’s on the right track in focusing his attention on the political rather than the economic.

There may have been just the faintest hint of behind-the-scenes political pressure, though, in Finance Minister Tito Mboweni’s remark to Daily Maverick that Zimbabwe’s “political leadership” needed to go about ensuring that sanctions were lifted.

Was he hinting that ZANU-PF needed to change its tune? If so, could this have explained why Mnangagwa returned a few days later from a fund-raising tour of Russia and nearby countries and tweeted that “violence or misconduct by our security forces is unacceptable and a betrayal of the new Zimbabwe … if required, heads will roll”?

Mnangagwa also invited the political opposition to “begin a national dialogue” and tweeted he was “appalled” by TV footage of the crackdown in his absence and had instructed that those responsible be arrested. So far, however, nothing has been done. There are also rumblings that his frank criticism has stirred resentment in Chiwenga’s camp and the military.

No one seems sure if Mnangagwa is manoeuvring cautiously lest Chiwenga and the military do unto him as they did unto Mugabe. Or perhaps he is cynically playing a good cop, bad cop game – speaking nice and blaming his deputy and the security forces for the brutality while remaining in power and further enriching himself.

The same tired speculation of the past is being recycled: who is really running the country, the president or the army? Either way, South Africa should – and, given its political and economic clout – could be insisting on reform. South Africa’s contribution to a joint economic bailout could be defensible and might even be indispensable for Zimbabwe and the region.

But a bailout could only be justified if it came with the sort of strict conditionality – mainly political – that Pretoria seems reluctant still to impose. DM