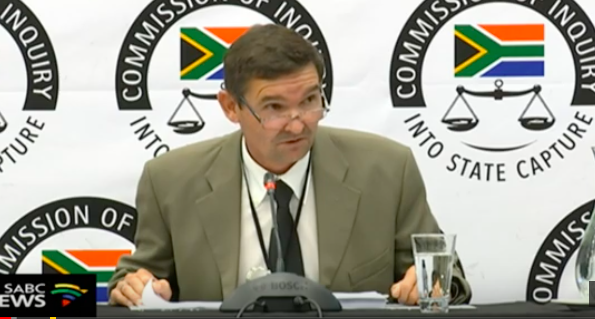 Richard Le Roux, Bosasa’s former Head of Special Operations, has detailed hundreds of thousands of rands in security installations at the homes of among others, senior ANC politicians, Nomvula Mokonyane and Gwede Mantashe as well as former South African Airways chairperson, Dudu Myeni.

Le Roux, a current employee of the rebranded Bosasa, was entrusted with running its VIP special projects operation for security systems at their homes for several years until 2017.

Testifying under subpoena, Le Roux revealed how up to R350,000 was coughed up by Bosasa – allegedly at the instruction of CEO, Gavin Watson, former COO, Angelo Agrizzi and other directors – at the homes of politicians and others.

In one instance, he was interrogated by “an investigator” over an alleged burglary at the Richards Bay home of Myeni that took place on the very day he visited along with Bosasa director, Trevor Mathenjwa, for an initial needs assessment.

Their homes, he said, were kitted out with, among other things, electric fencing, perimeter lighting and CCTV camera systems that allowed for off-site monitoring courtesy of Bosasa through the use of cryptic code names like “Bramley” or Blouberg.

All orders for material bought by Bosasa, Le Roux said, were strictly cash.

Le Roux, whose official title is regional technical coordinator, actually had a day job, but was given the task of personally overseeing the clandestine system of looking after the personal home security needs of a select group.

Though done by staff employed by what was then called Sondolo IT, a Bosasa subsidiary, Le Roux said he and the team of technicians had “strict” instructions to use unmarked cars and never to wear their work uniform when out on site for these projects.

“We were not allowed to wear uniform, only civilian clothes so that nothing could be traced back to the company,” he said.

He told the Commission that they did extensive installations at the home of Mokonyane and maintenance for several years at a Noordheuwel, Krugersdorp property.

Dubbed “Project Blouberg”, this property belonged to Mokonyane, he said.

He realised this well after he was first called out to meet Watson and Agrizzi for instructions at the property in 2013. Maintenance carried on until around 2017, Le Roux testified.

Until then, he had never been to the house before and was not aware back then what position Mokonyane held in government.

Le Roux said, “Watson instructed me to look at the electric fence, the CCTV system, the generator and distribution board and pool pump and tend to a once-off garden clean up.”

He told the Commission that Watson allegedly told him to make sure Mokonyane got everything she needed.

Once the initial work was done, Le Roux said he and his team returned to the property several times over a number of years for routine maintenance.

At times, he said, Watson would call him to say Mokonyane had complained about something that needed to be tended to as soon as possible or her PA, someone called Sandy, would send him requests via WhatsApp.

Le Roux says he knows the house well, knows how to get there and has already taken investigators to all the various properties they had worked on.

Costs incurred in the course of the work at Mokonyane’s house were always paid for by Bosasa in cash.

He testified to a similar project undertaken at three properties belonging to former ANC Secretary General, Gwede Mantashe. These, at the instruction of Bosasa director, Papa Leshabane, were done at Mantashe’s homes in Boksburg and two properties in the Eastern Cape, including a farm in Elliot.

The approximate cost of the projects on Mantashe’s properties was around R300,000, Le Roux said.

Justice Zondo asked how he arrived at the value of the work and Le Roux said it was based on his recollection of invoices that he had given to Agrizzi at the time.

At the Richards Bay home of Dudu Myeni Le Roux got slightly more than he bargained for when he suddenly found himself being interrogated by “an investigator” because there had been an alleged burglary on the very night he accompanied Bosasa director, Trevor Mathenjwa, there for an initial site inspection and needs assessment.

He said they flew to Durban and drove to the Richards Bay property – he described the gates and a koi fish pond – to check out the site first.

Due to the alleged burglary, the job had to be done immediately so once he arrived in Johannesburg the following day, he and his team had to return the same day to get started.

The work at Myeni’s house took around three or four weeks and Le Roux put the costs in excess of R200,000.

In addition to these security systems, Le Roux said he was also tasked by Bosasa’s Gavin Watson to manage security camera footage at the company’s premises.

He was responsible for the maintenance of those systems but had to make sure all that all footage relating to the VIP visits to the company were immediately deleted once the high-profile visitors were gone.

He said he didn’t normally have the time to study the footage before deleting it.

Once though, he testified, he saw footage of a visit by former President Jacob Zuma, police minister Bheki Cele and Dudu Myeni.

This was a visit to the Bosasa office park. “I had to wait until the visit was over and then had to delete the footage immediately.” DM

ANC MP Vincent Smith says that the Zondo Commission of Inquiry has given “illegible” invoices and documents to his lawyers who have asked for these following allegations that he was gifted an expensive security system by Bosasa, now trading as African Global Operations.

Asked if it was true that Bosasa had installed a state-of-the-art security system at his home, Smith would not answer as he is still mulling over whether or not to go to the Commission – Ferial Haffajee. DM