South Africa vs People of Venezuela 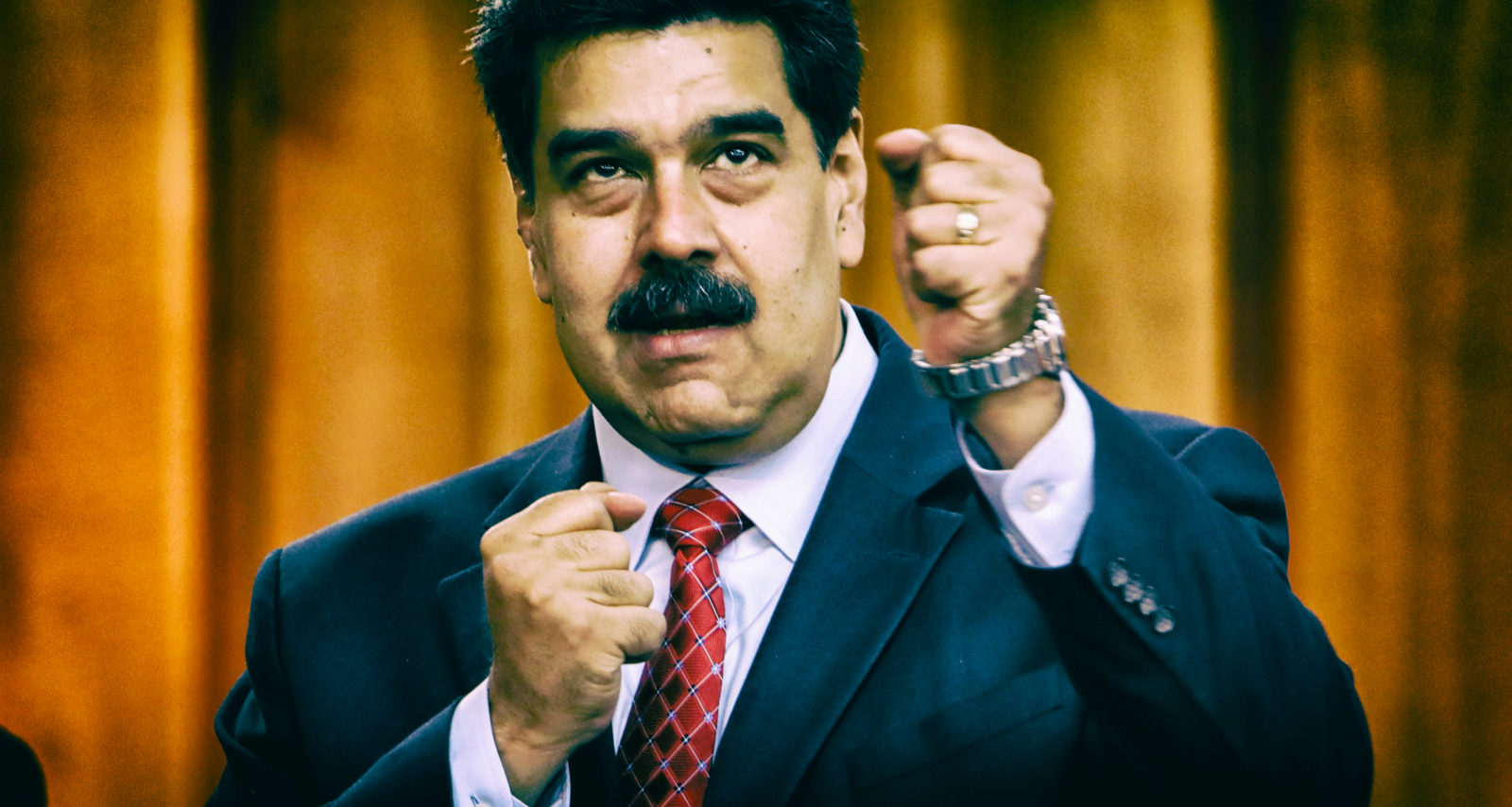 Given its important position on the UN Security Council, South Africa should play a constructive role by supporting a process towards free and fair elections instead of putting obstacles along the way to freedom for the Venezuelan people.

Venezuelans are out on the streets again. But this time it is different. While massive demonstrations in the past have been primarily initiated by the middle class, now predominantly poor people are showing their rage against President Nicolás Maduro.

Once one of the richest countries on the continent, Venezuela now ranks among the poorest in the region. The man-made crisis in the South American state affects all parts of society, and it is becoming severe.

Most Venezuelans cannot afford three meals a day; many people are starving. Medicine and basic needs are either scarce or unaffordable. The hyperinflation, caused by the government through debt, bad management, endless currency printing and high levels of corruption, has impoverished most people. The inflation rate is currently more than 4% – per day.

The future of millions of Venezuelans has been stolen by the government and many of them – especially the young and educated – are forced to leave the country they call home. In the meantime, the governing elite and the military generals have enriched themselves, shamelessly and continuously.

A parliamentary enquiry commission in 2016 led by the opposition estimated conservatively that, since 2000, more than US$300 billion had ended up in the pockets of a very few of the new socialist elite. Compared to this, the stolen state funds in South Africa’s state capture scandals seem minor.

Bearing this in mind, it is not surprising that Venezuelans wish President Maduro and his government to cease to be in power. Lots of populist promises were made to the people when military man Hugo Chávez took power in the 1998 elections. During an almost 15-year reign, he perfected the left-wing populist system, which is based primarily on the distribution of state funds in exchange for loyalty.

Chávez changed the constitution, centralised power, intimidated the free media and put the military in key positions of the state. To secure his power he created paramilitary groups – the infamous colectivos – to oppress opposition violently.

In the name of “the people”, he started to expropriate land, property and companies from the private sector without compensation, especially from his political opponents. He bought popularity among the poor by implementing huge social welfare programmes and hiring millions of Venezuelans in the state sector.

His model of the so-called “Socialism of the 21st century” was characterised by huge expenditures in consumption, but not in investments. Thanks to a historic oil price and the monopoly of the state-owned oil and gas company PDVSA, he could finance these completely unsustainable policies.

When Chávez died in 2013, he left an already rotten state to his successor, Maduro. Instead of implementing the necessary economic reforms, the new president continued with the same authoritarian style of governing, eventually becoming a dictator.

As a result of the decline in the oil price and waning production levels caused by mismanagement and lack of investment, the government had less money to distribute. Facing a majoritarian opposition in the population, Maduro took four decisions, which are important to understanding the current situation.

First, he militarised the government, handing ministries and state-owned enterprises to generals and allowed them to enrich themselves exorbitantly. In exchange, he gained loyalty from the military.

As a second step, Maduro increased oppression of any kind, including systematic human rights violations. Currently, more than 300 political activists are incarcerated; even more are living in exile. This is similar to South Africa during apartheid times.

Third, he created a system of dependency by taking advantage of food shortages. The government distributed food and goods in exchange for the people’s loyalty. State officials, intelligence and colectivos ensured that no opposition was formed among poor and dependent people.

In his fourth step, he sold enterprises, mining concessions and future oil revenues to China, Russia and Turkey, which explains their current inclination towards Maduro.

Until 2016, Maduro did not have to fear elections, because the system of fear and dependency worked well. But as a result of an increasing economic downturn, the opposition alliance managed to win the parliamentary elections in 2016.

In response, Maduro and the military started to manipulate and interfere in parliamentary affairs by refusing to pay any funds to the National Assembly, ignoring the new budget laws or appointments on which parliament had to decide. Maduro sent the colectivos or the military to intimidate opposition politicians within the parliament buildings. As a final step, he did not hesitate to imprison politicians or political activists for no reason and without trial.

As Maduro ignored the National Assembly, international pressure increased. Eventually, he created an illegitimate parallel parliament, the “constitutional assembly”, to which only government-selected groups could be elected.

Taking advantage of a demoralised, exiled and threatened opposition, the government organised presidential elections in May 2018. The opposition boycotted the election because the two major parties weren’t allowed to run and political persecution reached new levels.

By no means could this election be seen as free and fair.

In such a case, according to article 233 of the constitution, the president of the National Assembly has to take over as acting president in order to organise elections. The majority of the states in the world followed this constitutional interpretation and have acknowledged Juan Guaidó as the new legitimate temporary president. This is neither a coup nor has Guaidó declared himself the president. He was elected by the parliament.

With the exception of left-wing governments in Uruguay, Bolivia, Mexico and Nicaragua, all major Latin and North American states rapidly accepted Guaidó as the legitimate interim president. Some days later, most European states followed, including Germany, France, Spain and the UK. China declared itself neutral, while Turkey and Russia sided with Maduro.

South Africa, unfortunately, has also backed Maduro. For this seemingly incomprehensible decision, there can be only two reasons: either ideological obstinacy paired with a lack of knowledge or economic interest. The latter can be excluded as the two countries do not maintain any significant trade relations.

While most democratic governments of the world have not wanted to liaise with the dictatorial government in Caracas for years, South Africa’s foreign minister, Lindiwe Sisulu, had no problem receiving with open arms her Venezuelan counterpart, Jorge Arreaza – one of the regime’s toughest men – in July 2018.

South Africa and Venezuela started talks about “strengthening the existing bilateral relations including trade and investment, agriculture, energy, transport, mining, tourism and consular matters” (SABC). Apparently, the Department of International Relations and Co-operation seems to be ill-informed. The regime in Caracas arrived at its dawn and has nothing to offer that could be of any interest to South Africa. The systematic human rights violations isolated Venezuela internationally.

Nevertheless, Sisulu tried to engage with Maduro and strengthen his international reputation. A few days ago, she said she was in possession of a “full report” on the current situation in the Latin American country and that South Africa would oppose any kind of “regime change” in Caracas at the UN Security Council.

After the initial abstention on the vote on the human rights abuses by Myanmar against the Rohingya and the inaction with regards to the crisis in Zimbabwe, this is the third consecutive unfortunate decision by South Africa. One must not forget that the only demand of the huge majority of the Venezuelan people is to conduct free and fair elections.

In South Africa, many brave leaders such as Nelson Mandela, Walter Sisulu, Oliver Tambo and Ahmed Kathrada fought over decades for the simple right to have democratic elections. It is disturbing that the current South African government is denying this right to the Venezuelan people.

Even some media in South Africa are critical about restoring democracy in Venezuela. In its editorial, the Mail&Guardian states that the “United States puts the international order at risk”. Actually, it is the contrary: Together with most Latin American countries and the Organisation of American States, the US is trying to restore democracy in Venezuela, aiming to stabilise the region. The failed left-wing populism in Venezuela caused massive migration into the region. Colombia alone is hosting more than one million Venezuelans.

Furthermore, the Venezuelan government is deeply involved in international drug trafficking. Some years ago, Maduro’s nephews were caught trying to smuggle 800kg of cocaine into the USA. The inauguration of Guaidó as acting president opens a window of opportunity to re-establish democracy in Venezuela and end economic misery and systematic human rights violations.

Given its important position in the UN Security Council, South Africa should play a constructive role by supporting a process towards elections instead of putting obstacles along the way to freedom of the Venezuelan people.

During apartheid, South African freedom fighters rightly criticised anyone who maintained relations with the South African government. Now it is the ANC-led government itself that stands on the wrong side of history. DM

Henning Suhr is the South Africa director of the Konrad Adenauer Foundation.