Datsun Go Lux: A lot better – and a lot dearer too 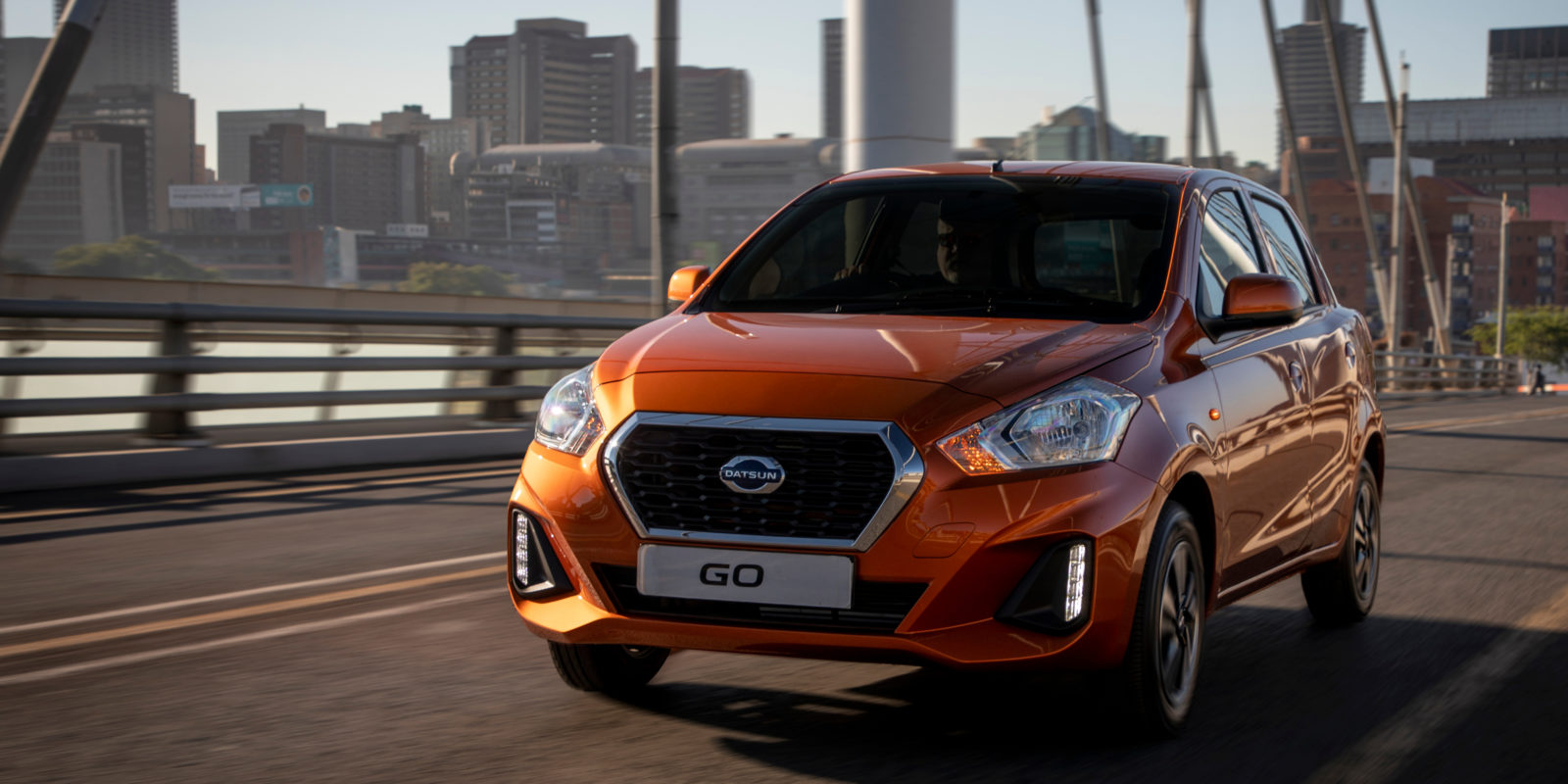 The upgraded Datsun Go addresses many of the concerns raised on the economy hatchbacks original debut. But it’s also become a lot pricier. Still, strong demand suggests that Datsun is on the right track.

Right now, the cheapest manual-transmission new car you can buy will cost you R130,900 – still a heap of money in a country where poverty is rife and almost 30% of the workforce is unemployed.

That car happens to be the Renault Kwid, an Indian-built runabout that’s come under fire for its lack of safety features. And yet, the car has been selling up a storm, proving that there’s a real market for new, affordable cars.

The Kwid’s closest rival is the Datsun Go – an Indian-built runabout that’s also been criticised for its lack of safety. And yet, it too has found a steady stream of willing buyers, further emphasising that at this end of the market, affordability counts for everything.

It’s a question of priorities: most entry-level buyers are seeking a reliable and affordable motoring solution. A lack of safety items such as airbags and ABS brakes isn’t even considered.

Let’s face it: driving a Go or a Kwid is still a far more attractive and safer proposition than having to rely on minibus taxis or an old jalopy to get from A to B.

Four years after its initial debut, the Go has undergone a substantial update that addresses most of the obvious safety concerns. The spruced-up version also gets an array of meaningful upgrades to the interior layout and equipment levels.

As before, the Go is an angular, slightly upright hatchback that’s built on the previous-generation Nissan Micra platform. As baby hatchbacks go, this one’s quite generously proportioned – it’s certainly no minicar.

The most obvious exterior update is at the front, where a bolder hexagonal grille is joined by an inverted air intake and larger lateral apertures, which are home to new LED daytime running lights on the Lux version, tested here.

You may also spot the wheel upgrade, with a rise in size from 13-inch to 14-inch rims – alloys in the case of the Lux. The larger wheels are wrapped in bigger-footprint tyres with a slightly lower profile.

Not much has changed at the rear, with the exception of a trim strip below the number plate. The integrated bumper is still quite broad, making for a high loading sill when the tailgate is opened.

That tailgate also doesn’t open high enough, and taller folk will have to be careful not to end up with a bruised forehead.

The biggest surprise awaits inside, where this latest Go offers a mostly new and much-improved cabin design. Gone is the ghastly light-hued dashboard, replaced by a redesigned version in smarter shades of charcoal, with simulated carbon fibre accents.

Another huge improvement is the move away from the previous model’s single-piece front seat to individual buckets, decked out in charcoal cloth with patterned inserts. They look a bit flimsy but feel comfy and supportive enough – and obviously now allow individual adjustment.

It also means that the silly dashboard-mounted handbrake lever has made way for a conventional handbrake between the front seats. The gearshift lever remains in its elevated position, leaving space below for a pair of cupholders.

Not immediately obvious is the presence of a USB port and a 3.5mm stereo minijack underneath the gear-lever housing. It’s awkward to reach but makes sense if your mobile device is tucked into one of the cupholders.

The dashboard is now dominated by a generous 7-inch colour touchscreen which offers access to audio sources, Bluetooth telephony and streaming, as well as vehicle settings. It’s also Apple CarPlay- and Android Auto-compatible, if your device is linked to the system via USB.

The screen is tidily integrated into the dashboard above the manual aircon controls. The system is easy to use, even on the move, although I would have preferred a conventional rotary volume control to the soft-touch plus/minus buttons for volume adjustment.

The steering wheel is a soft-touch polyurethane affair and isn’t adjustable, which might pose some ergonomic challenges if you’re very tall, or very short. In the Lux, the instrument binnacle contains a large speedometer and smaller rev counter, with a digital display for the trip computer.

The latter displays trip and odometer distances, time and fuel tank level, as well as range, and average and instant fuel consumption.

The list of standard kit is much more extensive than you’d expect of a bare-basics budget model. Electric windows and mirrors, remote central locking, rear park distance control and an immobiliser are all included.

With much of the controversy surrounding the original Go focused on its lack of airbags and ABS brakes, it’s good to see that the new model now has both. Dual front airbags are standard on both the Mid and Lux models as is ABS anti-lock control for the front disc/rear drum braking system.

Rear accommodation isn’t exactly generous, but it’s not nearly as cramped as you might think. The rear bench seat could be more comfortable, though: the backrest feels as flimsy as it looks.

I’ve already mentioned the boot’s high loading sill and the limited tailgate aperture, which does compromise access, if not insurmountably so. The boot has a 265-litre capacity, which is adequate. If you need more space, the one-piece backrest folds forward.

A hard plastic luggage cover pivots on metal stays to allow boot access. The cover can be prone to rattles, although I’ve been told that a solution is in the offing. Some rubber bushes on the stays should do the trick.

The drivetrain has remained unchanged from the previous model, which means this latest Go still gets its urge from a three-pot engine with 50kW and 104Nm on tap. That’s not enough to burn tar, but given the Go’s modest 829kg mass, the hatch does pick up its skirts with unexpected enthusiasm.

First gear is almost too short, making it easy to chirp the tyres on pull-off, but by the same token, fifth gear is close to an overdrive in real-world terms, meaning you’ll spend much of your time in the Go swapping between fourth and fifth, with the third a frequent overtaking favourite.

There’s always enough pep around town, and while the engine isn’t the quietest, its gruff vocals do exude a certain charm. Out on the open road, the Go runs out of steam on steeper gradients – and even more so if you’ve got four adults on board.

However, let’s not fool ourselves: the Go never claims to be a performance hatch, and it’s lively enough for most commuting situations. Yes, it becomes more challenged when asked to maintain highway speeds in a fully laden state, but that’s the norm for any small-engined, non-turbo car.

Drive it with some vigour, and the Datsun will keep up with many a more fancied – and more expensive – hatch. In fact, there’s something quite engaging about having to use the gearbox so often and pre-planning every momentum-saving move.

One needs to be equally pragmatic about the handling. By current standards, the Go is best described as vague: the steering lacks feel and precision, and the ride is wallowy.

However, neither gets in the way of the Go’s functionality. The steering might be short on feedback but it is effortless and manages a turning circle of 9.2 metres – agile enough to make even the tightest parking manoeuvre a breeze.

Part of the reason for that marshmallow ride is the Go’s 180mm ground clearance, which is taller than some crossovers. It suggests that the Go won’t be concerned about traversing poor-surfaced roads, or even gravel, while also soaking up the rough stuff.

Push too hard into a corner, and those 14-inch tyres are quick to squeal in protest as the nose starts running wide, accompanied by a fair amount of body lean. The tall stance makes the body roll seem worse than it is, though: in reality, overall grip and composure are reasonable.

You shouldn’t expect too much on the refinement front, either. The engine gets busy from around 4,000rpm, although it will rev well beyond that without complaint, and wind noise becomes intrusive above 110km/h or so.

The new Datsun Go is a big step up from its indifferent, safety-challenged predecessor. It’s a far more convincing hatchback now, and while ABS brakes and airbags have been included, they’re only one aspect of an overall package that is much more comprehensive than before.

The much-improved, updated Go Mid now retails for R144,500, while you’ll need to shell out R165,500 for the Lux model. In value terms, it means the Go Mid has become the model of choice.

It makes do with steel wheels, doesn’t get the daytime running lights, and lacks some of the silver-painted interior finishes, as well as the Lux’s more comprehensive instrumentation. But it retains all the other kit, ensuring a far stronger value proposition.

Datsun also needs to consider that an elevated price point goes hand in hand with equally elevated expectations. At under R100,000, it was easier to forgive the Go some of those indifferent finishes.

To its credit, Datsun has reacted to the criticisms about the Go’s safety with an updated model that is comprehensively better in almost every respect. The question is whether its affordability-focused target market will be happy to pay the premium those improvements entail. DM

Much improved safety and interior, with impressive standard specification.

Still rough around the edges, despite a major hike in price. Might now be too pricey for true entry-level buyers.