Writing the Election 2019: There should be no place for paramilitary groups in a democratic society 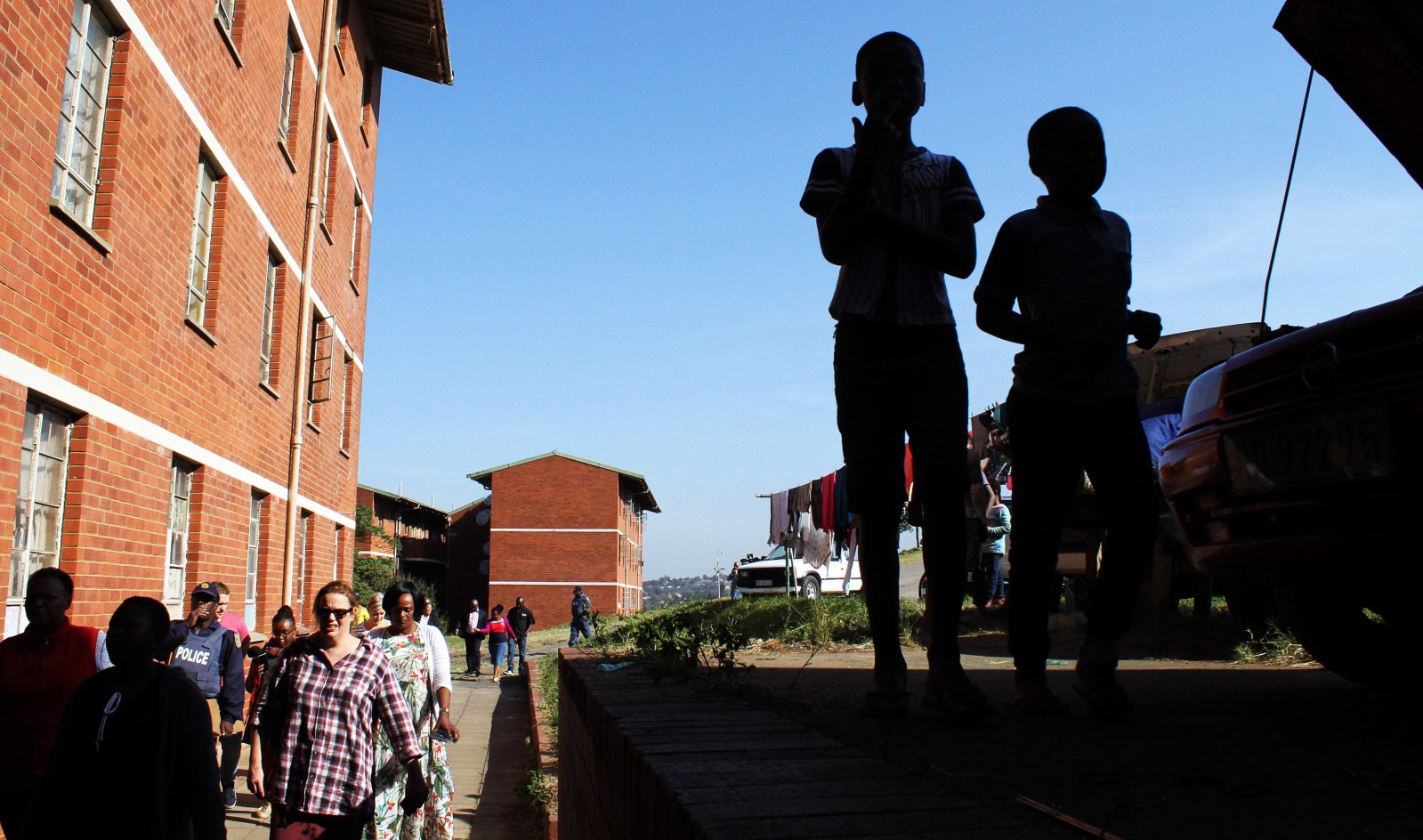 The Moerane Commission of Inquiry visits the Glebelands Hostel in Umlazi to assess and gather evidence on political killings around KwaZulu-Natal on July 21, 2017 in Durban, South Africa. (Photo by Gallo Images / City Press / Siyanda Mayeza)

Given the increased militancy of South African populism, with political leaders firing what appeared to be live rounds into the air, and increased paramilitary displays, the IEC may want to consider banning paramilitary groups from electioneering. Such a ban may include the display of military fatigues and regalia, as well as exhortations to violence and retribution.

There is no more appropriate a time than right now, to pose a question about what seems like slow creeping militarism of South African politics, what this may mean for the country’s future, in general, and more specifically, how this may pan out during this year’s election. It may all amount to nothing, or it could take a turn for the worse. It might nevertheless be a good move for the Independent Electoral Commission (IEC) to ban the presence and participation of “paramilitary” forces over the coming months.

As things stand, the country has at least three militarised forces, the South African National Defence Force; the ruling-party’s “military wing”, Umkhonto we Sizwe (MK), and more recently the Economic Freedom Fighters (EFF) showed up with their own paramilitary group. And then there is the great mystery that Daily Maverick wrote about almost four years ago: What happened to the violent factions, especially in kwaZulu Natal, that came so close to plunging the country into civil war during the early 1990s? Will they return at some point in the future? What we do know is that political killings have been ongoing in the province. There has been insufficient coverage of the facts, and even less about the significance of these facts.

We know, from the Report of the Moerane Commission of Enquiry into the Underlying Causes of the Murder of Politicians in kwaZulu Natal, that political killings continue to plague the province of KZN. When the report was released in September last year, the Moerane Commission said political parties must take responsibility for the violent competition between their members for political positions and power.

The Moerane Commission established that that members of MK were given employment as security in KZN – less than three or four years ago. If, then, we accept that “the ideals for which MK was established have been achieved”, there should be no reason for their presence in society. It simply emboldens other parties to form their own paramilitary groups.

Nonetheless, the Moerane Commission’s recommendation, read together with a statement by the Electoral Commission of SA (IEC) over the weekend, that political parties discourage their members from “cheap politicking that includes populist rhetoric and antics”, should provide cause for concern.

Given the increased militancy of South African populism, with political leaders firing what appeared to be live rounds of ammunition into the air, and increased paramilitary displays, the IEC may want to consider banning paramilitary groups from electioneering. The IEC probably does not have the power to issue such a ban, but it can make recommendations to the right officials. Such a ban may include the display of military fatigues and regalia, as well as exhortations to violence and retribution.

The Constitution on Military Formations

What remains unclear, is the exact role that MK (or its “veterans”) have in society, or what purpose they serve within the ruling party? It is also not clear why the EFF believes it needs a “military wing”. The EFF’s militarism is bold and rarely challenged in the media. The “fighters” as they prefer to be called, use military terms, insignia and rhetoric. Their leader, Julius Malema, is referred to as “Commander in Chief”, and the EFF holds meetings in what it refers to as “war rooms”. Perhaps single-handedly, the EFF may be leading a process of warlordism in South Africa. We should not get ahead of ourselves, though. South Africa is some way from a warlord state, but maybe only by a few years.

Much depends on whether the EFF would accept the outcome of the next election, and whether it would deploy its corpulent cadres in camouflage, and we would descend into a type of tribalism. As it goes, the EFF seems to be working very hard at proving the Caribbean black bourgeoisie intellectual, Frantz Fanon, right. He once wrote that there were, among “The African people … fierce demands for social justice which, paradoxically, are allied with often primitive tribalism”. This primitivism is often seen in the rhetoric of the EFF and the Black First Land First (BLF) group, who last week received the blessing of the IEC, so to speak, to participate in this year’s election.

Between Paramilitary Forces and Private Security

Warlordism has a deep history across the world. It is in Africa where, more recently, warlordism has thrived. Quite often there is a close relationship between the growth of private, non-state security and warlordism in Africa. Governments and political leaders have often resorted to hiring mercenaries to drive out communities who “stand in the way” of mining for oil and diamonds in countries like Angola and Sierra Leone. Foreign private mercenaries (including private community safety companies) often recruit local people who have some kind of loyalties to political movements.

Local (private) security firms often have no political loyalties. To them, it’s “just business”, which means it is easier to recruit them. Consider, for instance, the security firm that reportedly provides protection services for EFF leader, Malema. The firm, reported to be Tactical Security Services, employs “highly trained ex-police and military personnel”. It was reported that Tactical Security Services personnel accompanied Malema– during the time he was president of the ANCYL – to his hate speech hearing at the Equality Court. At what point does a private security firm start to fight the battles of the EFF, or train its paramilitary forces?

Between Malema-style politics and private security firms, we may well be seeing the privatisation of security as an outgrowth of the “big man” concept in African politics. The personality cult around Malema is what holds the EFF together. Link this to the EFF’s paramilitary posturing, its corpulent cadres in camouflage, and the ANC’s “veterans” of the guerilla war against the apartheid regime and the SANDF may no longer be the only militarised force in the country. It takes one errant defence force member to transfer munitions to the EFF, or to MK’s veterans, and the election outcomes may be contested by the bullet. As dramatic as that may sound, it is not beyond the realms of possibility. Election results are challenged around the world and, very often, it is followed by violence. We are, as mentioned above, far from that, for now. In the meantime, the IEC may want to make a statement on this in the coming days and weeks. Before the BLF also present us with a quasi-military force. Dan gaan die poppe dans. DM