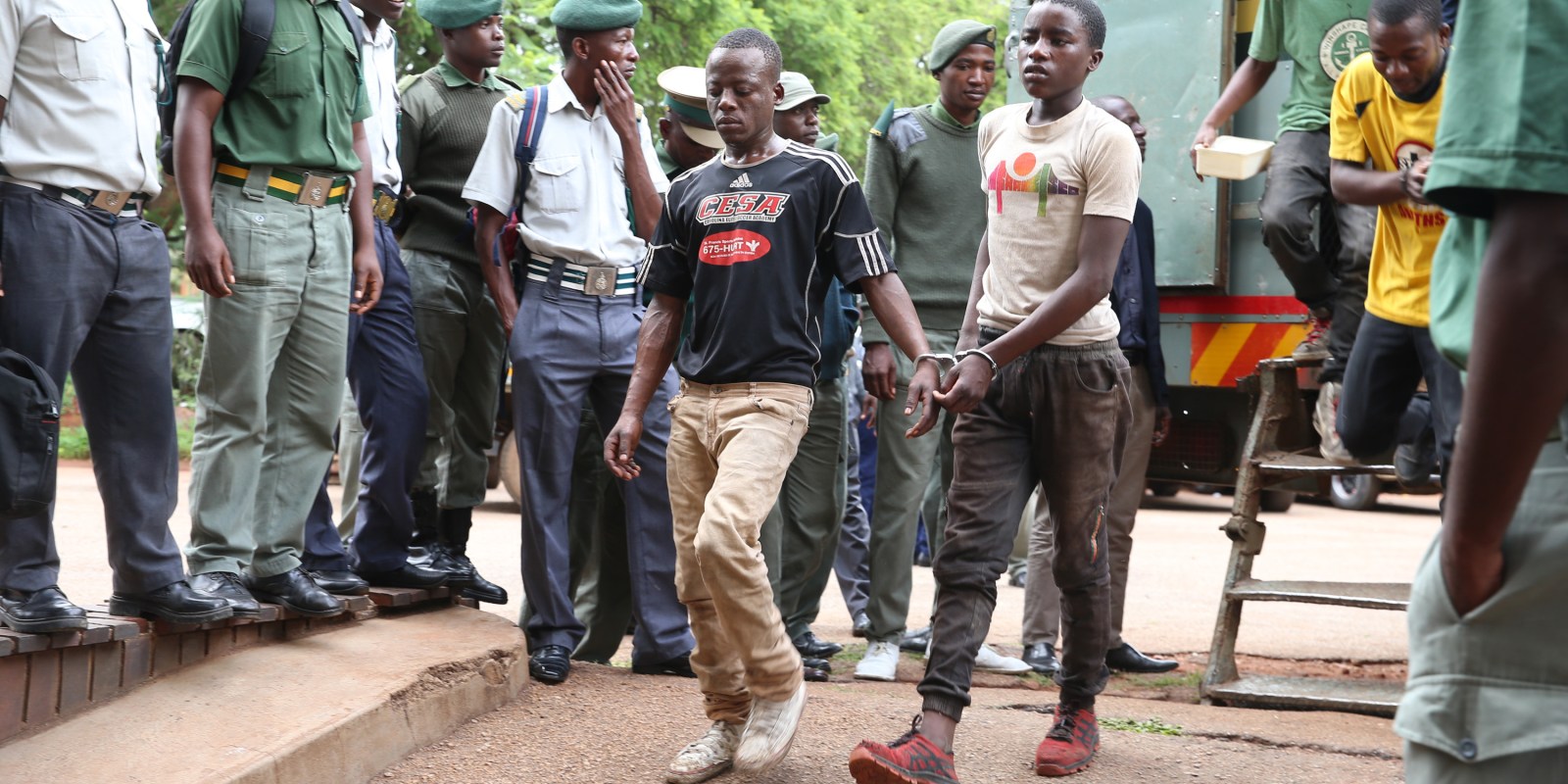 Some of the more than 400 protesters who were arrested over the recent fuel price increase, arrive at the Harare Magistrates Courts in handcuffs and leg irons in Harare, Zimbabwe, 17 January 2019. Several people have been killed during the fuel protests that began on 14 January 2019 following a 130 percent increase in the price of fuel by the government of Emmerson Mnangagwa. EPA-EFE/AARON UFUMELI

An uneasy calm has returned to Harare after days of protest against high fuel prices that left scores dead and many more injured and in jail following the Zimbabwean army clampdown.

It was before lunch on Tuesday, 15 January when the soldiers came knocking. Over the past week, they had been warning residents of Dzivarasekwa, near the capital city of Harare, to stay indoors, and Terrence Kapere had every intention of following the order.

Since 14 January Zimbabweans had been protesting against fuel price hikes announced by President Emmerson Mnangagwa on Saturday, 12 January. But what started out as a call for a stayaway by the Zimbabwe Congress of Trade Unions soon turned to protest action as residents blockaded roads to prevent people going to work. Over the course of the week the level of violence associated with the protests escalated. Shops were looted, tyres were burned and police vehicles were set alight. Whether those behind the violence were genuine protesters or those sympathetic to the ruling party and wanting to mar what was billed as peaceful protests, is still unclear. But by Saturday the Zimbabwe army was desperate to suppress the protests.

An unemployed Kapere, 28, was sitting at home with his younger brother in the high density suburb of Dzivarasekwa when five soldiers knocked on the door of his home, calling him by name and ordering him out of the house.

“When I and my young brother came out, the soldiers ordered us to roll in muddy waters while they beat us with sjamboks and booted feet, leaving us with wounds all over the body.

“They then frog marched us, together with a group of others who had been rounded up, to a nearby mountain where the beatings continued. We were forced to roll from the apex of the mountain to the ground, leaving most of us with multiple injuries,” Kapere said.

Kapere, who is adamant that he was not involved in any of the preceding week’s protests, believes he was targeted by the soldiers simply because he is a young man.

Kapere and his brother sustained lacerations and bruises all over their body and thighs. Kapere also suffered a swollen face and cuts on the back.

Women did not escape the beatings either.

Elizabeth Madhachi, 30, lives about a kilometre away from Kapere. She is nursing wounds on her breasts and back from the soldiers’ lashings.

“They scaled our security fence and broke our door with booted feet, forcing entry into the house and ordering everyone out of the house, whereupon they assaulted me and everyone else who was in the house, including my 12-year-old son,” said Madhachi.

She said only her elderly mother was spared the blows that rained down on her and other members of the family from about eight military personnel.

Another man, who did not want to be named, suffered a broken finger and open wounds after soldiers beat him with batons and iron rods.

“I am due for an operation and the doctors have said they will have to use some wire to join the finger. My son has suffered minor bruises,” he said.

According to human rights body, the Zimbabwe Human Rights NGO Forum, 12 people have died, 78 others have gunshot injuries while 242 people having been assaulted, tortured, and suffered dog bites.

Scores of injured residents were ferried to a local private clinic where they received free treatment provided by volunteer doctors.

Beatrice Mtetwa, a prominent human rights lawyer representing activists, including Pastor Evan Mawaririe, said about 400 people have since been denied bail. Mawaririe, the known #ThisFlag movement founder, is being charged with subversion against the government and faces 20 years’ imprisonment.

There have also been reports of some ruling party, Zanu-PF members receiving death threats.

Politician Mayor Justice Wadyajena revealed in a tweet that some sections of the ruling party were plotting to kill him and his family and impeach Mnangagwa.

“They threatened to kill me and harm my family. I stand by @edmnangagwa (President Mngangagwa) and wish they knew ours isn’t just a political relationship. However they try, we will never quit nor be intimidated. The plot is foiled, they lack numbers for impeachment and the devil isn’t Professor Jonathan Moyo but amongst us,” the tweet read.

Mnangagwa, who was due to attend the World Economic Forum in Davos, Switzerland, cancelled his trip, opting to return home.

“In light of the economic situation, I will be returning home after a highly productive week of bilateral trade and investment meetings. We will be ably represented in Davos, Switzerland by Minister of Finance. The first priority is to get Zimbabwe calm, stable and working,” Mnangagwa’s tweet reads.

On Monday this week, the military were still patrolling in most high density areas in Harare. And by Tuesday an uneasy calm had returned with most people returning to work, the internet (which had been shutdown by the government) restored and most businesses, including banks, open.

There were still concerns over the high cost of transport despite government calls to transport operators to charge $1-$3. A Ruwa resident who refused to be named, told Daily Maverick she paid $8, three times what she used to pay, to get to work.

On his twitter account Mnangagwa denounced the methods used to quell the protests by the security forces and called for a national dialogue.

“Likewise, violence or misconduct by our security forces is unacceptable and a betrayal of the new dispensation. Chaos and insubordination will not be tolerated. Misconduct will be investigated, if required heads will roll.

“I invite leaders of all political parties as well as religious and civil leaders to set aside our differences and come together. What unites us is stronger than what could ever divide us. Let’s begin a national dialogue. Let’s put the economy first. Let’s put the people first,” the tweet reads.

Despite Mnangagwa’s calls, reports emerged on Tuesday that the soldiers had resumed the beatings. DM