The Shutdown: Open the US government, say ‘No’ to s...

The Shutdown: Open the US government, say ‘No’ to slave labour 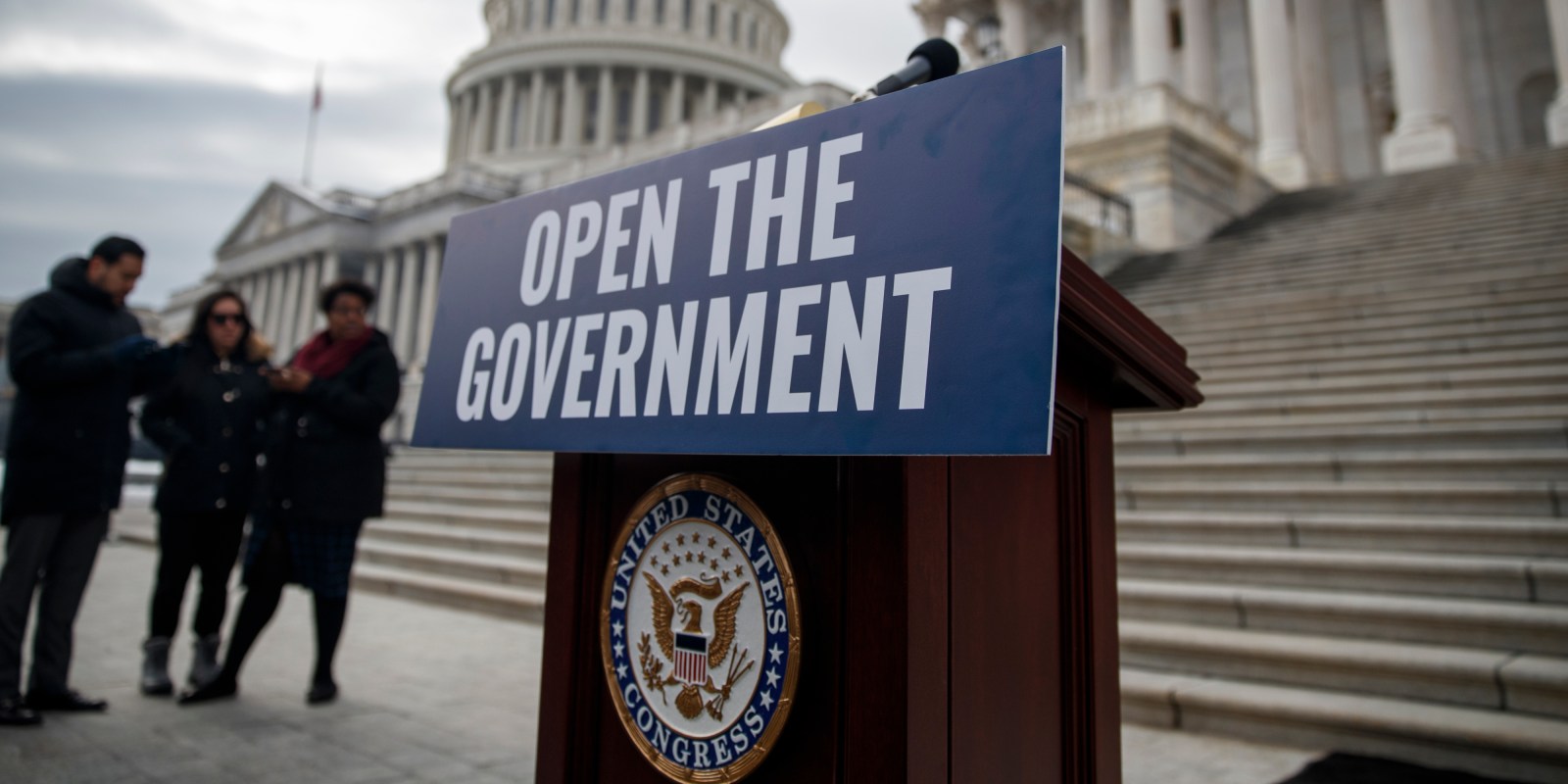 A sign hangs on the podium prior to a Senate Democrats press conference urging US President Trump to reopen the government outside the US Capitol Capitol in Washington, DC, USA, 16 January 2019. Senate democrats outlined effects the shutdown, now in its 25th day, is having on American workers and families and called on President Trump to reopen the government immediately. EPA-EFE/SHAWN THEW

The month-long government shutdown in the US continues, with elected officials responsible for the impasse refusing to do their duty, shielded from the full consequences of their inaction by requiring federal employees to keep ‘essential’ government services open without pay or recourse.

The current refusal of the president and Senate of the United States to fund the continuing operations of the federal government involves two breaches of trust so profound as to call into question the legitimacy of that government. It is a constitutional crisis of the highest magnitude.

The first breach of trust is the refusal of the president and the Senate to fund the several departments of government, including Commerce and Homeland Security, not because they cannot, but because they will not. Such a refusal is a clear violation of their oaths of office.

Both the president and Senators swear (or affirm) upon assuming their positions to “faithfully” execute or discharge their duties, which include preserving, protecting and defending the Constitution of the United States and bearing “true faith and allegiance to the same”.

By refusing to fund the government, and especially by making the funding contingent on a particular policy, they are in effect refusing to perform one of their Constitutional duties, which is to ensure the effective functioning and continuance of our democratic government.

Holding government hostage to a policy is holding the people hostage to that policy. The president and the Senate were elected to govern. They were not elected to arrogate unto themselves the right to decide whether we shall have a government at all.

The second breach of trust is the insistence that hundreds of thousands of public employees continue to work without pay, not because they choose to do so, but because they must.

The Constitution explicitly prohibits such insistence. Amendment XIII of the Constitution reads: “Neither slavery nor involuntary servitude, except as a punishment for crime whereof the party shall have been duly convicted, shall exist within the United States, or any place subject to their jurisdiction.”

Both these breaches of public trust are so profound that they call into question the legitimacy of our government itself. Are they impeachable offences? That depends upon one’s definition of “high crimes or misdemeanours.” But even if the responsible parties were impeached — i.e., charged with a breach of trust — the Senate majority, one of the principal parties to the breach, would sit in judgement on itself. Oh, to be the judge and jury of one’s own misdeeds!

We thus find ourselves in a situation in which the elected officials responsible for the impasse refuse to do their duty and are shielded from the full consequences of their inaction by requiring federal employees to keep “essential” government services open without pay or recourse. These elected officials are securing their own freedom at the expense of the unfreedom — the involuntary servitude — of federal workers.

If the government’s refusal to pay its employees and its insistence that they work despite this refusal is not unconstitutional, then words no longer have any meaning, and nothing is unconstitutional.

Where do we go from here? First, we must say “no” to slave labour. We must recognise the right to refuse work except in return for rightful payment. If an employer refuses to pay an employee, how can that employee be fired for refusing to work? Since when is refusing to be a slave a punishable offence? Since when is the victim of an injustice not owed compensation from the perpetrator for the injustice suffered?

Second, the president and the Senate must join with the House and open the government. The government must open on a continuing basis, however, short the term, while they continue to debate the president’s policies. Shutting down the government to make a political point is not “politics”. It is profoundly anti-democratic and anti-political. It is nurturing authoritarianism and incubating tyranny.

Open the government! Say “No!” to slavery. Only bold and decisive action can save us from those who would ignore our Constitution and destroy democracy and freedom. DM

Michael Merrill is Professor of Professional Practice, Rutgers University and co-author (with Sean Wilentz) of The Key of Liberty: The Life and Democratic Writings of William Manning, A Laborer, 1747-1814 (Harvard, 1993).