South Africa’s youth registering and voting — is there reason amid political madness? 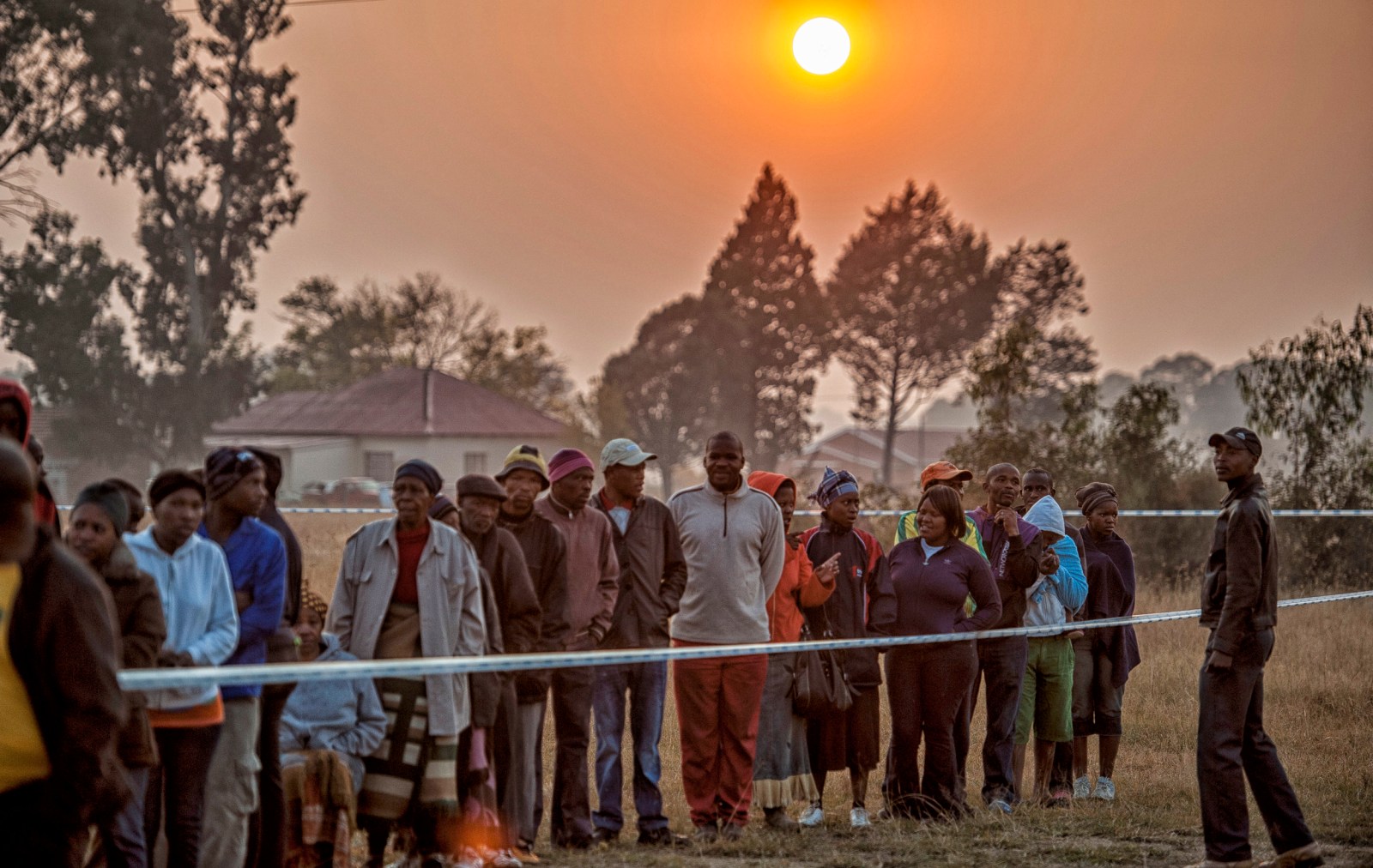 South Africans queue as they wait to cast their vote on May 7, 2014 in Manguang, South Africa. (Photo by Gallo Images / Conrad Bornman)

The youth need to register and cast their votes. They will energise the body politic, and ensure that they help to give South Africa a new vigour and direction.

Young people’s cynicism — if not realism — about the shortcomings and failures of politics and the political system in South Africa stand between them registering to vote, in large numbers, and eventually casting a vote. This is ironic in the context that the youth has historically played an important role in changing South African politics.

Why should young people take any particular interest in voting in 2019?

The youth are notoriously reluctant to take the step to become part of the garbled “adult world” where political parties, elections and government interface. Throughout South Africa’s 25 years of democracy, youth voter registration and ballot-casting rates have been lower than those of the older age categories.

Multiple studies, ranging from Susan Booysen’s 2013 study of citizen views of South African democracy to Lauren Tracey’s 2014 ISS youth study have highlighted — in line with the international trends — that young people have high expectations of politics and democracy, find party politics confusing and alienating, and cast a cynical eye on the seemingly disturbed world of voting and elections.

A few years down the line and evidence abounds that the youth are not blindly “falling” for the appeals to register to vote in South Africa’s sixth set of national elections in May 2019. This is aided by low levels of trust that the youth have in politicians, official political processes and political structures in general, as research conducted for the Mapungubwe Institute for Strategic Reflection’s Indlulamithi South Africa Scenarios 2030 found. In addition, polling research by Ipsos (late 2018) shows that about 40% of South Africans harbour doubts about the integrity and/or functionality of the country’s political parties.

To date — pending the final national pre-election registration initiative on the weekend of 26-27 January 2019 — IEC statistics show that only 16% of 18-19-year-olds eligible to vote have registered and 54% of the 20-29-year-olds. This is still some way off the 33% of 18-19-year-olds and 64% of the 20-29-year-olds who had registered for the 2014 elections. These two age groups constitute for this analysis “the youth” — about half of the South African electorate (or 17.7 million of the 36 million South Africans who are eligible to vote).

Against this background, a mere few days before the last opportunity for mass voter registration for the 2019 elections, South Africa’s youth have clearly not undergone a general conversion to believing that voter registration is their portal into the political future.

Youth in South Africa understandably have more reason than the older age categories to be cynical about voting. For a prolonged time now, they have borne the brunt of unemployment. Their unemployment rate, according to the Spectator Index, is estimated just short of 53%, far higher than the population average. Among the other painful experiences strangulating young people socially are gender violence, crimes such as drug use, and lack of access to quality health and education, despite having won important education victories.

Can they be blamed for wondering whether their votes would help make a difference in this particular election? Party politics in recent times has equally not made electoral participation attractive to the youth — except for “missionary youths” who want to rescue South Africa from the hands of party politicians.

The political culture of the South African youth has also been changing in ways that counter their commitment to register and vote in elections. They have discovered, and tested — to great effect –multiple alternative ways of direct political action, actions that deliver rapid and effective results (at least, more effective than voting).

Youth in South Africa, from the 1976 Soweto revolt to #FeesMustFall of 2015-16 and continuing, have found evidence that elections are not essential to get a political impact. In fact, accelerated, concrete gains (policy changes and implementation) are registered through revolt and immediate challenges to political authorities and government policies. Wide-ranging policy, cultural and governance changes have followed in the wake of young people demanding action from the government directly.

Diverse categories of youth in South Africa (often differentiated by class and urbanisation) also take the lead in much of the protest action — for services, policy change and accountability of elected representatives. Spates of land occupations in urban and peri-urban areas did not involve the youth exclusively, but the youth was represented amply. The ranks of service delivery protests inevitably are swelled by the youth, sadly, often because they are unemployed and are the “available troops” for the community leaders who initiate the protests.

With much evidence (far beyond the current examples) of effective, results-infused direct protest action, why should the youth bother to register and vote only to embark on a tedious process of getting the elected representatives, perhaps and eventually, to attend to needs and bring results?

However, in this youthful country, where the leadership of the governing party and several other parties is old — although a touch younger than in the past, and a case where anything below 50 years old is considered “young” — young people need to imprint their political “king”-maker status. By registering and voting they can hold such parties to account, if not ensuring that political parties with younger leaders (the Economic Freedom Fighters and Democratic Alliance come to mind) actually live out youth aspirations. The youth, through voting, can put the youth in power through whichever party, by coming to constitute intra-party power-brokering blocks. This will help push parties to act in their interest, consistently, cross-class and above all to greater effect than in the past.

For such an impact to be felt in national government decision-making, the youth need to register and cast their votes. They will energise the body politic and ensure that they help proactively to give South Africa a new vigour and direction. If this possibility is too lofty, perhaps the youth can just help ensure that the “better devil” will govern come June 2019, by simply looking at what parties are saying about matters that affect the youth directly.

For many young people (the ones vocal on social media at least), the deal-breaker may be what the party commits to and practices on gender issues, involving, for example, gender-based violence, women’s emancipation in the economy, and ensuring that girl children have a fighting chance.

Time is running out fast for South African youth not yet registered to vote. Political parties are weak, but one of them will be elected into power (perhaps even forced to form a coalition). Political reinvigoration is essential, and there are unparalleled openings for the youth to make themselves the new “mainstream” of South African politics — by bringing the parallel participatory processes into conventional politics and creating an unconventional new core.

Voting empowers the youth to define both the future of South Africa and their role in it. DM