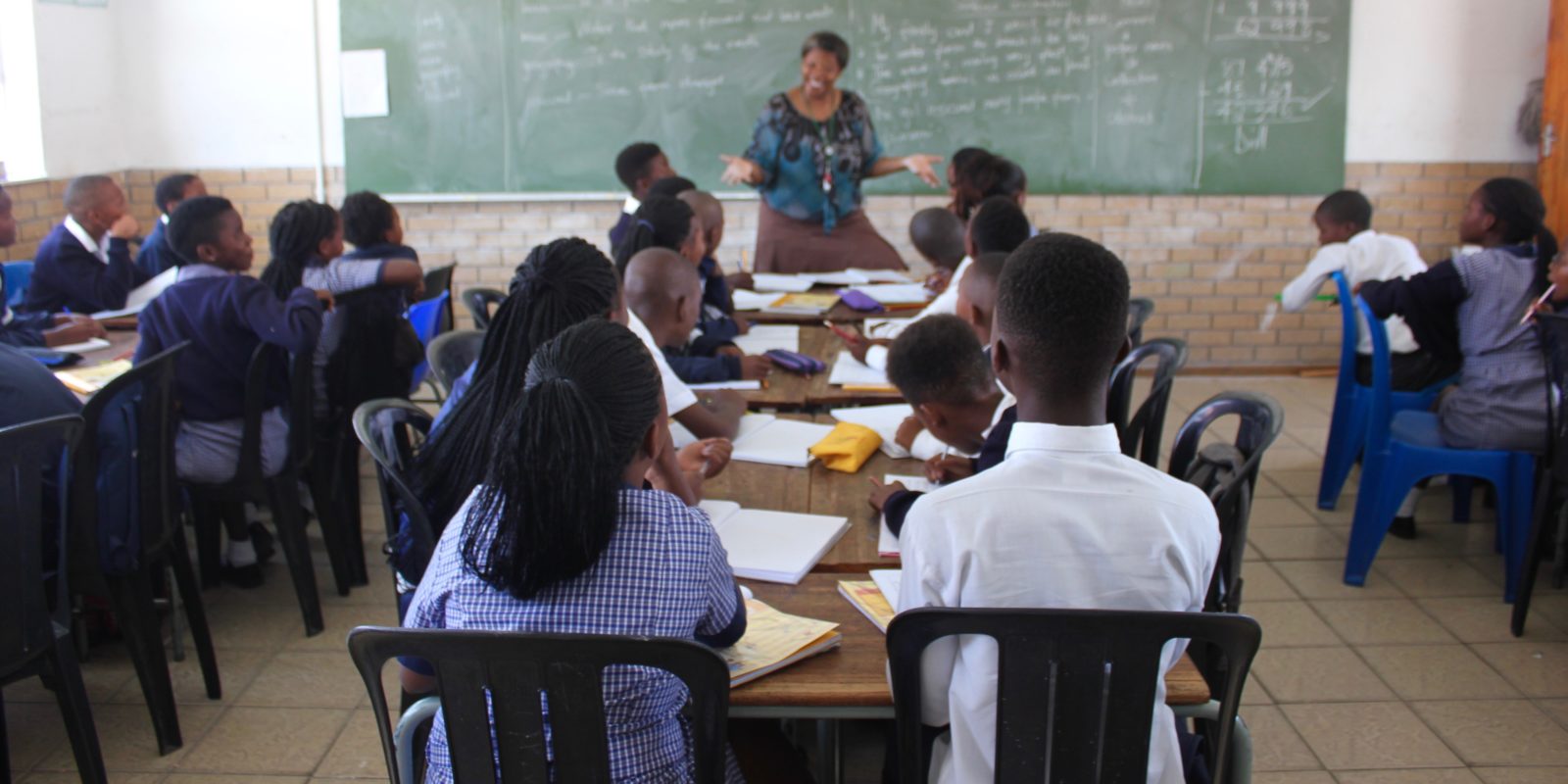 Students listen as teacher Nolundi Mbaba concludes her English lesson. She was one of the first teachers from the school to be part of the SII teacher training programme. 15 January 2019. Photo: Christi Nortier

How can universities — often perceived as ivory towers — help identify the obstacles to learning at the school level? A book, Partnerships in Action, attempts to answer this question and to find solutions. The University of Cape Town’s Schools Improvement Initiative identified a potential partner in Intshayelelo Primary School. Beyond collaborating on the book, academics and principals have learnt from one another about the classroom.

Intshayelelo Primary School is in the working class suburb of Ilitha Park, Khayelitsha. It has been partnering with UCT since 2013 to learn from one another through collaboration. It was one of the university’s first attempts to stretch out across the Cape Flats to primary and high schools in Khayelitsha through the Schools Improvement Initiative.

The initiative involves a range of faculties, from the School of Education to the Faculty of Health Sciences. They aim to help the Western Cape Education Department to improve the quality of education in the province.

This fee-free state school is a good example of Professor Crain Soudien’s belief that it is the obligation of the university to make sense of what teachers are having to deal with in the school environment on a daily basis.

“We need to be helping you [the teachers], not in the sense of being better than you, but helping you to think about how you do this thing of working with these incredible young people,” said Soudien, Emeritus Professor of Education and African Studies at UCT, while speaking at the book launch for Partnerships in Action at the UCT campus.

“We developed school management by attending short courses at UCT, but when the course was done I had a mentor to help me implement what we were taught,” said Mbobo.

“They walked with me along the road and they established the COP (Committee of Principals) to ensure shared dialogue and mutual learning among the principals of Khayelitsha schools.”

The theme of stronger ties between universities, schools and communities persists throughout the book and through how Jonathan Clark, the institute’s director, and Mbobo describe what they have all learnt.

In addition, the principals’ relationship with academics is a priority. The initiative values the two-way flow of knowledge between academics and teachers to bridge the gap between UCT and Khayelitsha, which are often seen as entities far removed from each other.

In keeping with the two-way flow of knowledge, in 2013 UCT helped the school to establish a new library and the following year UCT students from the Health and Education faculties began doing practical learning at the school.

This was made possible because Mbobo knew the needs of his learners and could identify where the gaps were.

“The academics did not know the dynamics of the township schools. I was able to tell them why we have an issue with our school governing body, why our stakeholders behave the way they do and what the socio-economic conditions of the learners are,” said Mbobo.

Mbobo and Clark co-authored a chapter in the book which discussed the history and progress of the school.

Clark was himself a principal for many years at a school in Khayelitsha, the Centre of Science and Technology. He emphasises that whether the school is good or bad, all 20 Khayelitsha schools have students who are motivated and who can be helped.

“In the past, higher learning institutions such as UCT tended to take the view that the problems of students in our schools were not theirs to fix.” It is the reason for what Phakeng called “engaged scholarship”.

During a visit to the school, Mbobo said that the resources procured through the initiative, such as the library, are being used to ensure better pass rates in the systemic test series for grades 3 and 6. The school has 29 teachers who teach in both English and Xhosa from Grade R to Grade 7.

Nolundi Mbaba has been a teacher for 27 years, of which 15 have been spent at Intshayelelo Primary School. She found that through the project’s workshops and short courses she learnt strategies to make learners learn and have fun. She was so inspired that she studied further and graduated in 2018 from the University of the Western Cape with an Advanced Certificate in Education.

She found that going back to the classroom as a student helped her understand the importance of making learning exciting. Now, she is mentoring student teachers from UCT about how to implement the strategies she learnt at the initiative’s workshops and short courses.

The project is working towards change, from working with teachers to getting science labs up and running, as well as putting money together to train teachers to work with the equipment.

“That is the kind of bread-and-butter professional development work we have done,” says Clark.

It is this kind of grassroots development that, according to Phakeng, is key to the university being “relevant in today’s world”.

Clark found that “one might imagine that just because it [Khayelitsha] is 30km away and only 40 minutes in a taxi [from UCT] that that’s only a short way away. It is actually a different world”.

Clark, like Soudien, praised teachers and principals teaching in Khayelitsha for their willingness to help and being open to adopting newer methods of educating and engaging with students.

Clark, who started out as a science teacher, understands that it is not always easy and thanked partners from the various schools and university structures.

“We support teachers in the classroom, we play an advisory role and we give them access to short courses.

“We can’t solve probably 100 of the things which the school needs, but we can do what we can do with the resources available to us,” said Clark. DM