Turning the tables on Boko Haram 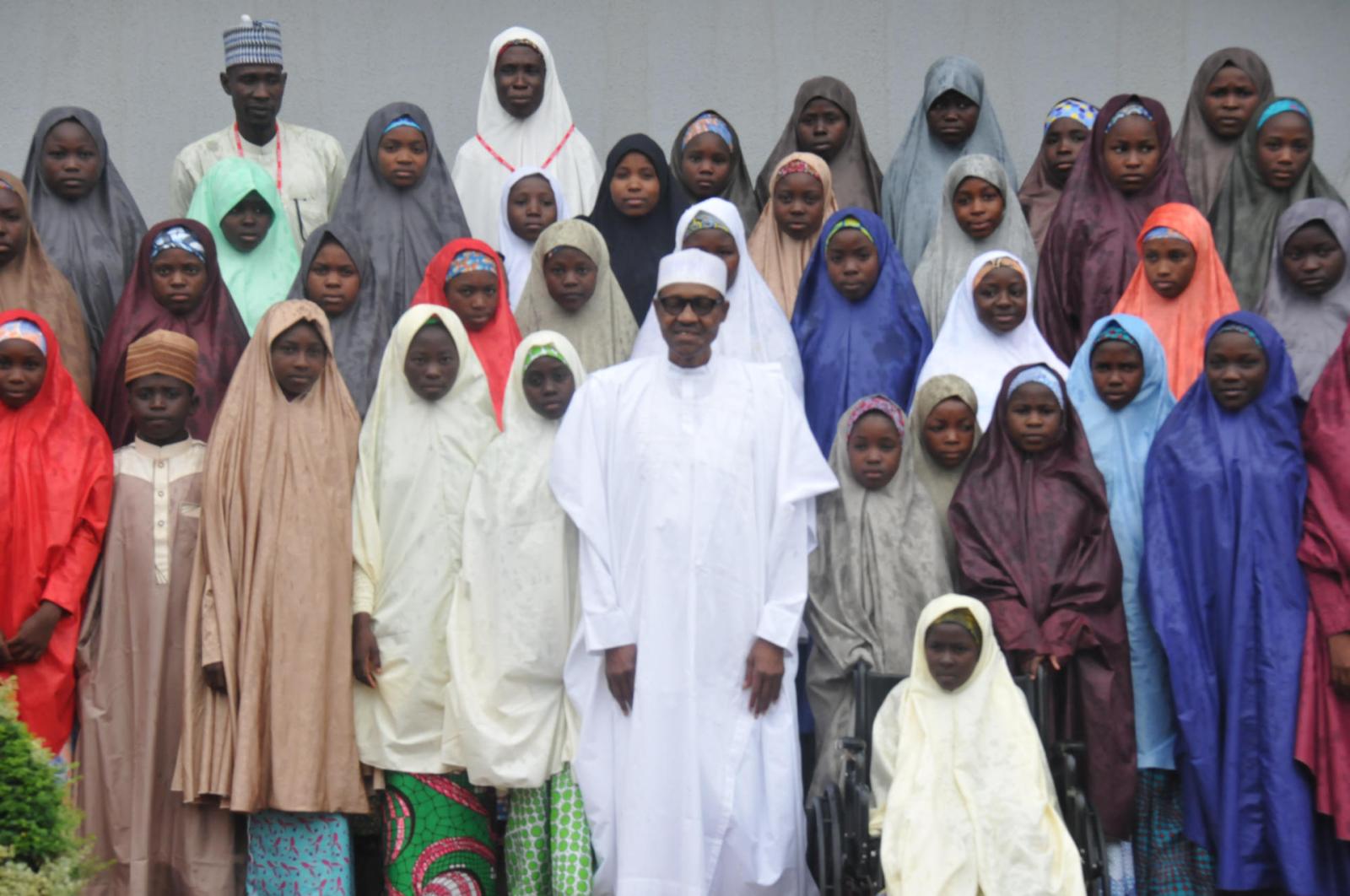 President Muhammadu Buhari (C) poses for photographs with the released Dapchi School Girls who were abducted by Boko Haram during a reception at the Presidential Villa in Abuja, Nigeria, 23 March 2018. EPA-EFE/STR

Can historical identity be called on to counter violent extremism in Nigeria and beyond? By Akinola Olojo.

Identity – for both individuals and groups – is shaped by a mix of elements including ethnicity, religion, culture and personal experiences. Much of this is historical in nature. Violent extremist groups draw on such elements of historical identity in their narratives to further their objectives.

But can this history also be called on to counter violent extremism? Examining how this can be done could offer policymakers ideas at a time when creativity and moving beyond more traditional approaches to addressing violent extremism are needed.

In Nigeria, when Boko Haram’s first leader Mohammed Yusuf was alive, his movement drew inspiration from the writings of 13th-century Islamic scholar Ibn Taymiyya. Yusuf and his followers met regularly at a centre they called Markaz Ibn Taymiyyah in Borno State.

Boko Haram aims to establish a caliphate and exploits a key phase in Nigeria’s pre-colonial history to justify this. The group’s leaders invoke the legacy of the 19thCentury Sokoto caliphate – the foundation of contemporary northern Nigeria. The caliphate was the product of a popular jihad – one that appealed to the people of its time and which Boko Haram uses to strengthen its call for a new caliphate today.

Boko Haram leaders have previously referred to the Sokoto caliphate to evoke feelings of a glorious past. This is reflected in the group’s audio and video sermons. There are writing regarding one of the videos titled “Implementing Islamic Laws in the Islamic State of Africa”. In it, Boko Haram factional leader Abubakar Shekau reminds followers of how “war was declared on the Sokoto caliphate by the enemies of Islam … under the colonial project”.

Can these same historical narratives be used to strengthen efforts against Boko Haram? About a decade ago when Yusuf preached in Sokoto – the present-day location of the ancient caliphate – a few individuals joined his following. Most, however, remained unpersuaded by his sermons.

Boko Haram was largely rejected in these communities because the people maintained a strong sense of their historical identity. They considered themselves beneficiaries of the jihad which their predecessors had already experienced back in the 19thCentury; the jihad led by Shehu Usman dan Fodio.

They rejected Boko Haram because they viewed the group as forcing on them a second jihad which they considered a mockery of what they held historically sacred. In the eyes of these communities, the ideological deception that Boko Haram presents as “jihad” violates an enduring historical ideal on which their Islamic world view is anchored.

The rejection of Boko Haram’s preaching in Sokoto is noteworthy as it occurred at a time when this part of Nigeria experienced the highest levels of absolute and relative poverty in the country. This is a crucial reminder that economic deprivation doesn’t always lead to violent extremism.

The historical potency of the Sokoto caliphate offers the local actors a reason to contest the position of Boko Haram on an ideological level. The history of these communities inspires resilience and is something the more troubled Borno State in Nigeria’s north-east can learn from.

The people of Borno emerge from the history of the Kanem-Bornu empire which existed centuries before the Sokoto caliphate. By the 17thand 18thCenturies, the empire was attracting some of West Africa’s leading scholars, some of whom established contact with the renowned Al-Azhar University in Cairo.

The main traditional leader of present-day Borno is a descendant of Muhammadal-Kanemi, a 19thCentury Islamic scholar and political leader who was bold enough to challenge the jihad expansion of the Sokoto caliphate into Borno’s territory.

It is this kind of boldness, strengthened by the weight of communal history, that the people of contemporary Borno need to be reminded of when it comes to resisting the influence of groups like Boko Haram.

Symbolically evoking history and asserting values against violent extremism can take many forms.

Following the Charlie Hebdo terror attacks in Paris in January 2015, over a million French citizens reasserted their commitment to the values of the French Republic by gathering at the Place de la République.This is a monument to the country’s historic revolution that asserted foundational principles of liberty, fraternity and equality.

Research is still needed in order to identify the local actors in Nigeria who could lead efforts through using history. Nigeria’sNational Action Plan for Preventing and Countering Violent Extremism would need to strengthen its existing component which focuses on community engagement and resilience. Community and religious leaders should also be part of this commitment.

Violent extremism thrives on divisiveness and exclusion, but the power of historical identity could offer the legitimacy needed to unite communities to act against a common enemy. Policymakers should consider this approach because it resonates with the identity and values of communities affected by violent extremism. DM