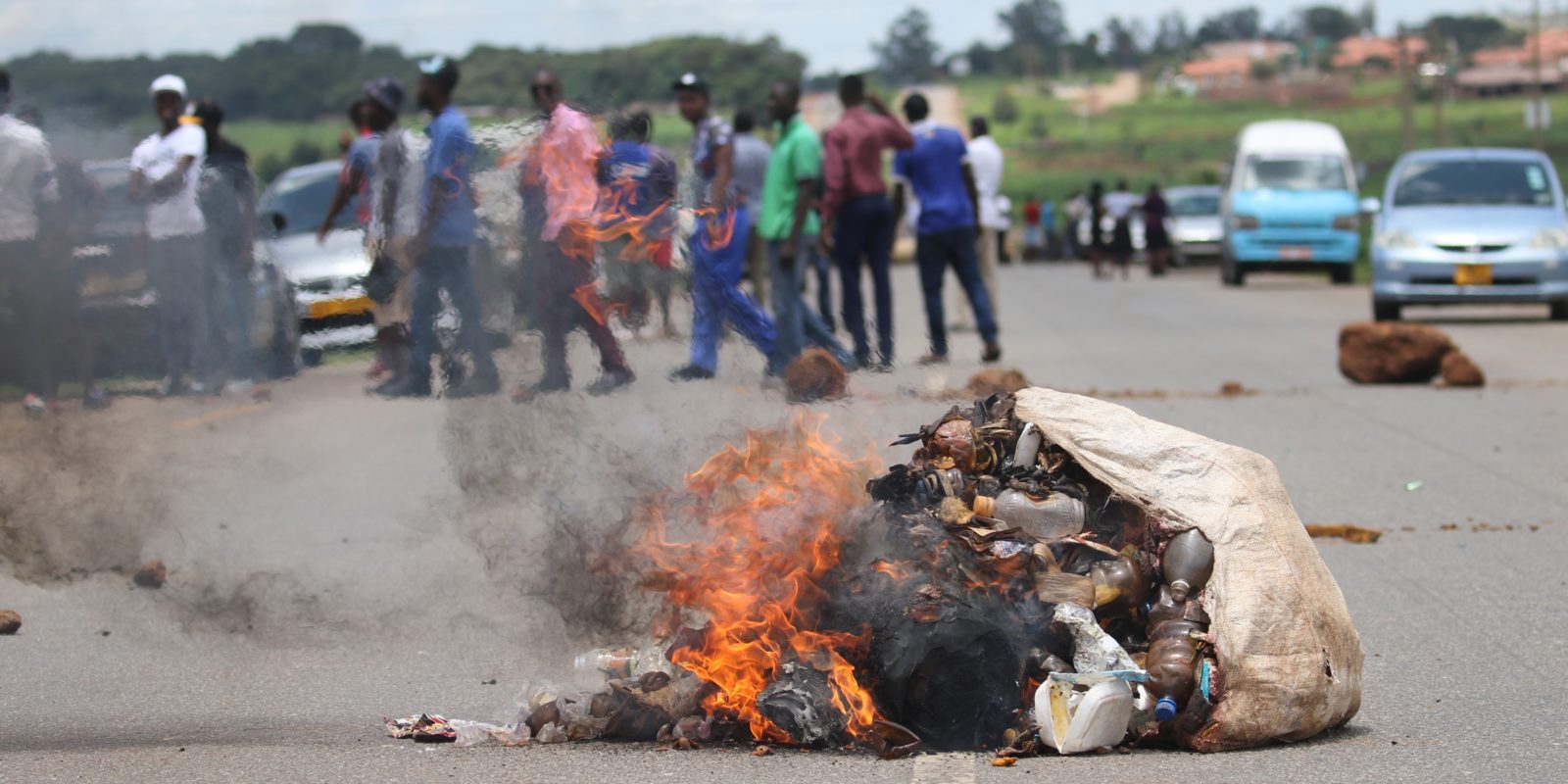 Protesters block a major road leading into the city centre in Kuwadzana, Harare, Zimbabwe, 14 January 2019 after members of the public went onto the streets to protest over the recent fuel increase. Unconfirmed reports say four people have been shot and wounded by the police. EPA-EFE/AARON UFUMELI

In November 2017, thousands of Zimbabweans thronged the city centre in Harare, hooting and whistling as they celebrated the ousting of ageing and long-serving President Robert Mugabe. Optimistic Zimbabweans pinned their hopes on the ‘new administration’ to address the economic challenges the southern African country has faced for decades. However, a year down the road, hopes have been dashed and citizens have taken to the streets again, protesting against high fuel prices and the country’s economic state.

Hundreds of Zimbabweans did not report for work on Monday, instead of taking to the streets of several areas, blocking major roads and looting shops. The Zimbabwe Congress of Trade Unions called for protests against a fuel price hike that more than doubled its cost. In Epworth, a high-density area in Harare, four people have allegedly been shot by security officers during demonstrations and eight have been arrested, according to Zimbabwe Lawyers for Human Rights.

The protests follow the fuel price increase announced by President Emmerson Mnangagwa on 12 January, which was met by immediate outrage.

“With effect from midnight tonight, a fuel pump price of $3.11 a litre for diesel (previously $1.38/l) and $3.31/l for petrol (previously $1.43/l) will come into effect. These prices are predicated on the ruling official exchange rate of 1:1 between the bond note and the US dollar and also on the need to keep fuel retailers viable,” Mnangagwa announced at the weekend.

The increase is the latest in a period that has seen prices for basic commodities and public transport sky-rocketing and which has left many Zimbabweans, whose salaries have not increased at the same rate, fast losing confidence in the country’s leadership and government systems.

Patson Chiwale, a self-employed mechanic from Harare, has seen his transport costs jump from $2 to $5 practically overnight. This was the third time the cost of a taxi into the city has increased in the past two months.

“It’s just unbelievable and shocking to hear the new public transport price and that the president announced the new fuel prices on Saturday night,” says Chiwale. He added that taxi operators were simply passing on the increases, with several telling him they were following the president’s example.

Taurai Moyo, a security guard in Harare, has taken to sleeping in a park in the Zimbabwean capital during the day and doing his security duties at night to avoid paying the transport costs from his home to the city.

“I am paid $80 every month and need $10 a day now to commute from home to work. I am renting where I stay and have five children who need school fees and food on the table,” Moyo said. He said the situation has forced him to consider returning to his rural home with his family.

Political commentator Ibbo Mandaza said the economy “has gone to hell and back”.

“The uprising has begun, albeit slowly. Anything can happen… things are unfolding,” said Mandaza.

Zimbabwe National Chamber of Commerce chief executive officer Christopher Mugaga said the increase in the fuel price was long overdue as it had been unsustainably low. A 500ml bottle of cool drink fetched between $2.50 and $3, while fuel was being sold at $1.43/l. However, Mugaga said the government’s excessively heavy hand in the running of the economy was problematic — it should cease price controls and allow market forces to prevail.

“The major challenge is that the country’s economy is not producing, with major sectors such as agriculture, mining, tourism and manufacturing operating below 40% on average,” said Mugaga. Piecemeal measures such as the increase in fuel prices or salaries were nothing but desperate attempts to deal with symptoms.

Politician and lawyer David Coltart said the ruling party was not prepared to grapple with the core economic problems facing the country, and was still embroiled in the fiction of the bond note being on par with the US dollar.

“The only way is for us to ‘redollarise’. What the Finance Minister, Mthuli Ncube, is saying about introducing a local currency in 12 months can only be done when there is confidence in the banking sector. The solution is not to introduce a new currency,” Coltart said.

According to Bloomberg, the last time things were this bad was in 2008, when the country was contending with hyperinflation that saw prices doubling every day, left shop shelves empty and forced people to buy groceries from neighbouring countries or on the black market.

The following year, the government abolished the Zimbabwean dollar in favour of the use of other currencies, primarily the US dollar. DM