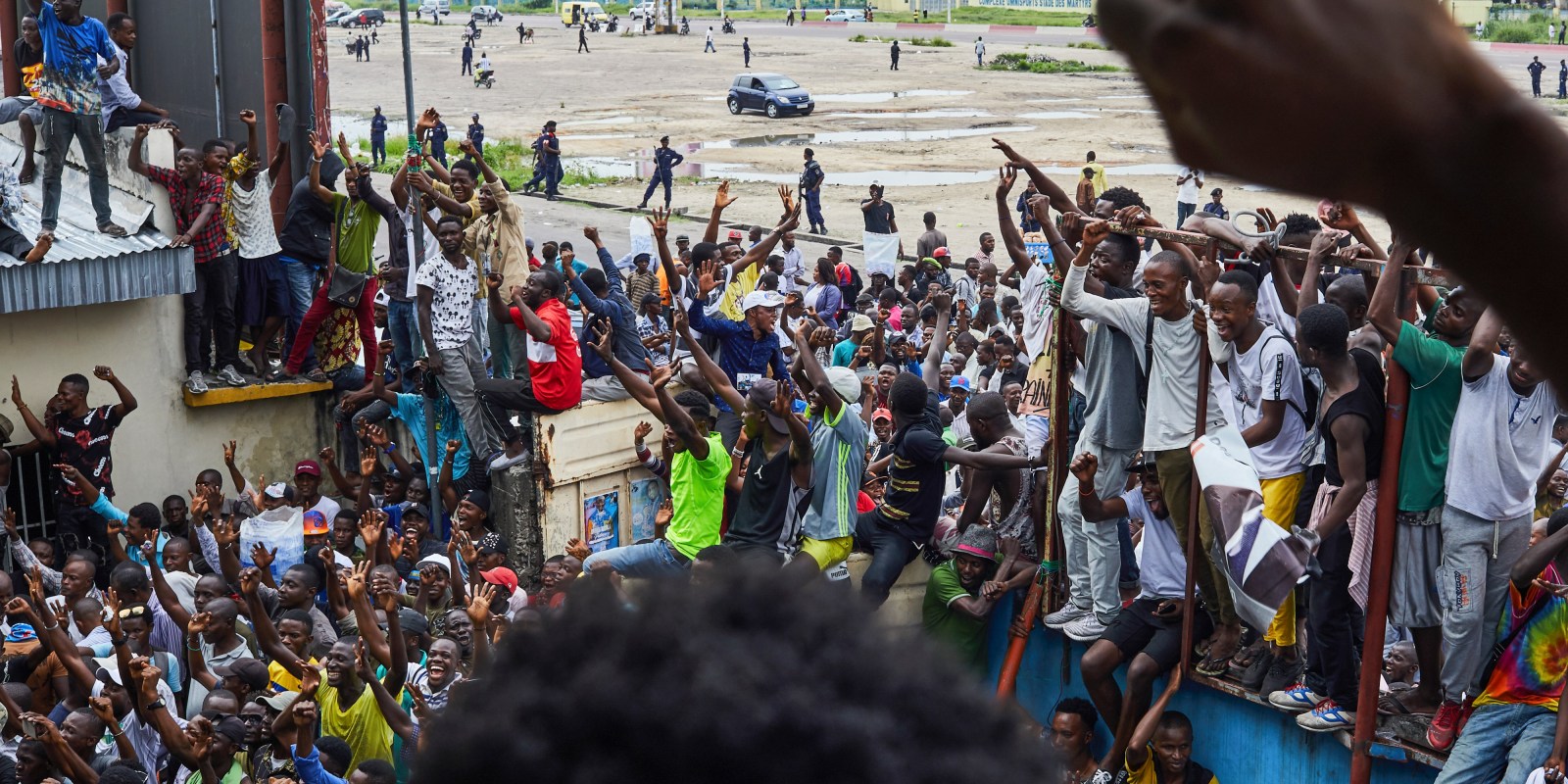 Supporters of DR Congo's defeated opposition candidate for the Presidential election Martin Fayulu gather to listen to his speech during a rally in Kinshasa, Democratic Republic of the Congo, 11 January 2019. Another opposition candidate Felix Tshisekedi, the leader of the Union for Democracy and Social Progress (UDPS) party, was declared the winner on 10 January of the fraught elections. Fayulu has vowed to contest the result in court, according to reports. EPA-EFE/HUGH KINSELLA CUNNINGHAM

An appeal by the Southern African Development Community indicates doubt over the integrity of the disputed Democratic Republic of Congo presidential poll.

The Southern African Development Community — with South Africa’s evident support — has called on the political leaders of Democratic Republic of Congo (DRC) to consider negotiating a government of national unity to resolve the impasse over the disputed 30 December 2019 elections.

The move comes as a surprise as until now SADC — representing 16 states of southern Africa including the DRC and South Africa — had appeared to back the DRC’s handling of the elections.

The DRC electoral authority CENI announced that Felix Tshisekedi of the UDPS had won the presidential elections, with Martin Fayulu of the Lamuku coalition coming in second and Emmanuel Ramazani Shadary, the preferred candidate of outgoing President Joseph Kabila, coming in third.

However, Zambian President Edgar Lungu, chairperson of SADC’s Organ on Politics, Defence and Security, seemed to call these results into question on Sunday when he proposed a government of national unity of all the main parties and also called for a recount of the vote.

In a statement — later reissued by South Africa’s Department of International Relations and Co-operation — Lungu said that “given the strong objections to the provisional results of the presidential elections… the Southern African Development Community (SADC) has called on all leaders to consider a negotiated settlement for an all-inclusive government.”

Lungu also called for a recount of the vote, noting that the DRC Catholic Church, which had deployed more than 40,000 monitors to the elections and the opposition coalition Lamuku had both cast strong doubts on the results.

The Catholic church group Cenco and many other observers reportedly believe that Fayulu really won, and probably by a wide margin. Many DRC analysts suspect that Kabila did a deal with Tshisekedi because he could get more favourable terms for himself from him than from Fayulu, whose Lamuka coalition also includes veteran politicians Jean-Pierre Bemba and Moise Katumbi, who were prevented from contesting the elections.

Fayulu submitted a formal challenge to the results on Saturday. This will have to be considered by DRC’s courts before CENI publishes the final results.

But Lungu seems to have pre-empted the outcome — and cast doubt on the process — by encouraging all stakeholders in the DRC elections “to pursue a negotiated political settlement for a government of national unity”.

Lungu said he had spoken to other leaders of SADC and the International Conference of the Great Lakes Region about his idea. He had also spoken to Tshisekedi and other stakeholders within and outside the DRC.

A source close to Tshisekedi said on Sunday that he was “open to discussion… but Cenco and Lamuka must play honest and open cards”. He suggested that they had both disputed the election results without any evidence.

The success of negotiations towards a government of national unity would depend on “the two radical leaders, Bemba and Fayulu…Katumbi is more flexible.”

And South African International Relations and Co-operation Minister Lindiwe Sisulu appeared to respond favourably to Lungu’s proposal, at a press conference in Johannesburg later on Sunday.

She said Pretoria had consulted widely on the DRC elections, including a meeting between Lungu and President Cyril Ramaphosa and Lungu’s call for negotiations towards a government of national unity was “a common view of most of the people who have had anything to say about this”.

She said that since there seemed to have been “an amicable resolution of an alliance between Tshisekedi and Kabila it would make sense to take into account the Fayulu group as well”.

But she also insisted that this was just an idea put forward by SADC.

“It is not compelling anyone to go that way. But it would seem to us that it would be the most logical way and therefore President Lungu speaks on behalf of all of SADC when he expresses that view that if we have the various parties coming together, we’ll have a better outcome.”

She recalled that when the DRC opposition leaders had met the ANC in South Africa before the elections, the ANC had urged them “to find some commonality and have one person representing them as the opposition”.

She noted that this initiative had not succeeded.

Sisulu noted that the idea of a government of national unity — with the outgoing National Party — had worked well for the ANC in the mid-1990s.

But Sisulu was at great pains to stress that South Africa and SADC didn’t want to pre-empt the legal and electoral process in the DRC by taking away the rights of Fayulu to go to the courts to challenge the election results. She said South Africa continued to encourage him to do so in order to clarify all issues around the elections.

Fayulu reportedly submitted his challenge on Saturday after a nervous moment when armed forces surrounded his house in Kinshasa, raising fears that they were trying to forcibly prevent him from registering his challenge.

The effort by the ANC and later by Western powers to persuade the DRC opposition to unite behind a single candidate ultimately failed because although Katumbi’s and Bemba’s parties had united behind Fayulu, Tshisekedi had dropped out of the opposition coalition to fight the election on his own.

In his statement Lungu said:

“SADC draws the attention of Congolese politicians to similar arrangements that were very successful in South Africa, Zimbabwe and Kenya where governments of national unity created the necessary stability for durable peace.

“SADC, therefore, encourages all parties to enter into a political process towards a government of national unity in order to enhance public confidence, build bridges and reinforce democratic institutions of government and electoral process for a better Congo.

“SADC has urged DRC authorities to swiftly resolve all elements of doubt that could undermine the fairly successful election and pose a danger to the peace and stability of the country.

“SADC has taken note of the strong doubts cast on the poll outcome by Roman Catholic Church in the DRC which had deployed more than 40,000 monitors, the opposition Lamuka coalition and other observers and therefore feels a recount would provide the necessary reassurance to both winners and losers.

“It is therefore imperative that at this very crucial moment, all DRC politicians commit to actions and processes that do not escalate tensions any further. SADC expressed solidarity with the government and people of DRC for organising a relatively successful election that inspires hope that the country is on a path towards democratic consolidation.” DM