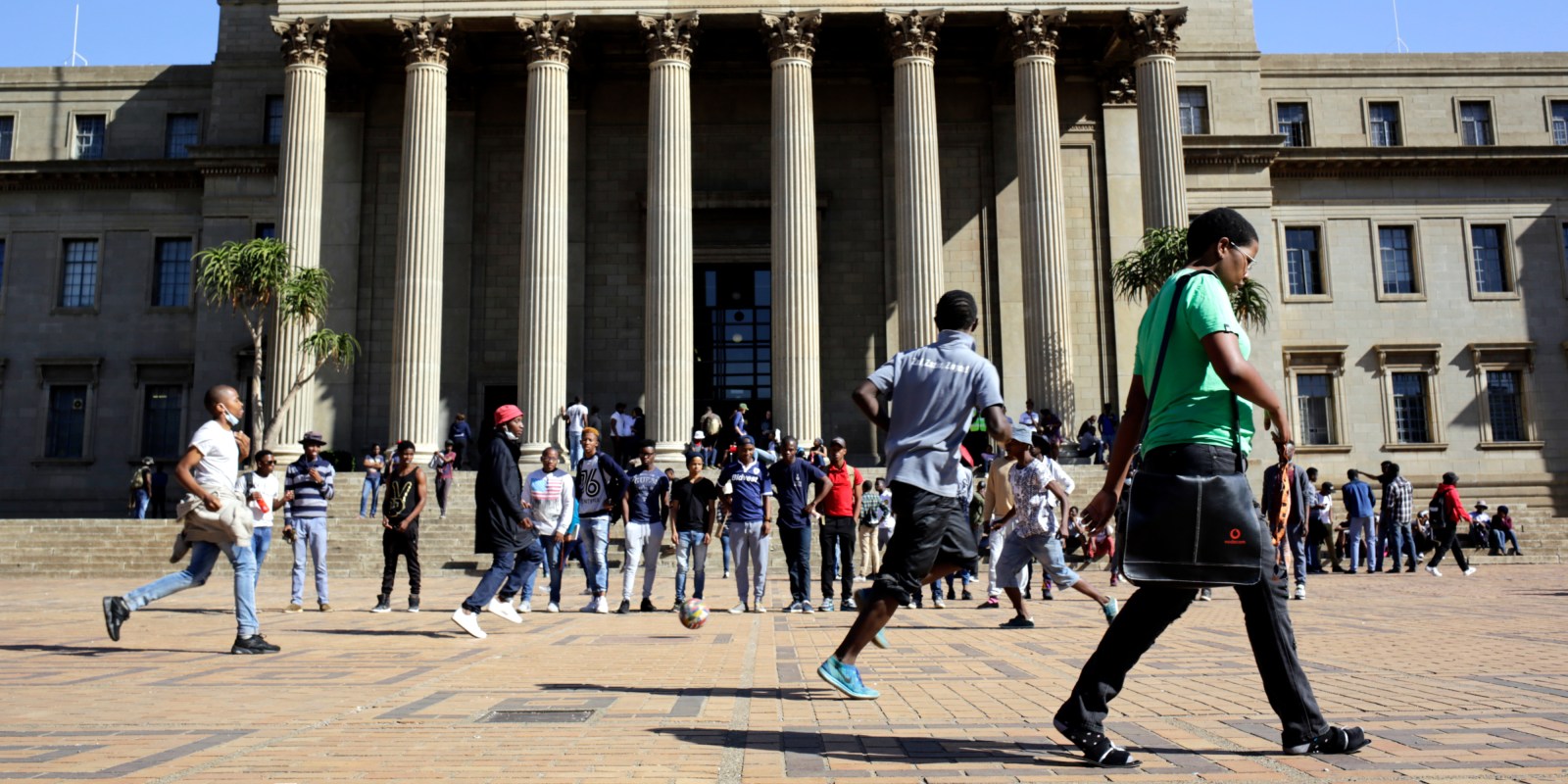 Students from University of the Witwatersrand (Wits) play football after protesting during the third week of ongoing protests against the cost of higher education, Johannesburg, South Africa, 03 October 2016. EPA/CORNELL TUKIRI

A bold new approach to university admissions could be a game-changer.

A seriously under-estimated, massive logistical process is happening right now at the 26 universities across the country.

The matric results (NSC & IEB) are only just out and yet, within three weeks, more than 200,000 students with university exemptions must be filtered, sorted, confirmed and starting studies in late January.

Unisa will vacuum up the majority of the students but around 75,000 first-years will somehow be chosen for one of the 11 “traditional varsities” that are, rightly or wrongly, at the top of the status tree.

How those kids are selected, and funded, is one of the great debates of our age – right across the world. University used to represent an elite process for the very few – most of the population went nowhere near tertiary education unless it was narrowly vocational – but, in the last 50 years, schooling beyond school has expanded to the point where it is now close to a basic educational right.

The funding debate has been hashed over extensively in recent times but the selection process remains relatively unexamined.

Simplistic notions like “the top exam students” are being challenged everywhere and never really applied. America’s Ivy League and UK’s Oxbridge always relied on interviews as well and a list of other mysterious criteria which sometimes included lineage (what the heck should your parent’s educational history ever have to do with your own prospects?).

And the Ivy League varsities are now in a monumental legal tangle over admissions. If they admit on results alone, their campuses would have an outsized proportion of Asian students and their medical schools would be overwhelmingly female – their attempts to avoid those fates, and apply demographic filters, have led them into class-action suits.

Currently, there’s a welter of really good, predominantly American, writing – JD Vance, Richard Reeves, Mark Lilla, David Brooks, Edward Luce and Dalton Conley offer some of the best examples – which reveals the astonishing extent to which the system (of which university admissions is a key component) is completely rigged to be self-perpetuating.

Richard Reeves is particularly pointed. He says the “wealth trap” in America is as much of a thing as the “poverty trap” – it’s very difficult to fall out of privilege because the system rescues those that might do so, just as the same system works against those trying to escape from the bottom. Reeves believes the “glass floor” is as real as the “glass ceiling”.

I could bang on more about this theory but I suspect it’s bleedingly obvious, especially in South Africa where its expressions are everywhere.

Privileged kids (white or black) have more money and more time invested in them by their parents, and go to the best schools and achieve the best results, which get them into the best degree courses, which they are best-equipped financially, socially and academically to cope with. The parents often network them into the best internships and give them capital backing which enables them to take entry-level jobs at unsustainable wages to build their careers, and to take the difficult first step into the housing market (the current financial joke is that the fastest growing bank in the world is The Bank of Mum & Dad).

There are a couple of ideas around how to tackle this problem.

One thought, floated in an article by Princeton Professor Dalton Conley, is to have a lottery. Put all the names of students who achieve a base matrix of requirements for over-subscribed colleges into a hat and then have a blind draw for the lucky candidates.

But the idea that is really intriguing, is one championed some years ago by former UCT vice-chancellor Dr Max Price. He suggested that the best way to determine entrants to elite universities might be to prioritise, in terms of both places and funding, the top five or 10% from every school in the country.

At a single stroke, that would take a sledgehammer to the wealth trap and advance transformation. It would solely reward people who achieve within their own context rather than against a national exam benchmark (a system Richard Reeves calls “testocractic”). And it would make it far harder to buy academic advantage because, at the well-funded school, you would need to be in the elite within the elite to gain automatic entry.

The necessary compromise would be that, once whatever number the algorithm and the budget dictated as optimal had been admitted on this ‘free top percent’ basis, then the balance of places could be allocated on the current standardised criteria with means-tested funding.

This policy is already in action in the American states of Texas, California and Florida – the latter automatically admitting the highest-graded 20% from every school into leading public colleges.

No doubt there are some serious practical obstacles, and possibly disastrous unintended consequences, with the implementation of this notion in South Africa, but the concept is seductively simple, bold and morally clear. DM