Letter from the Philippines

Trump Under the Coconut Palms? 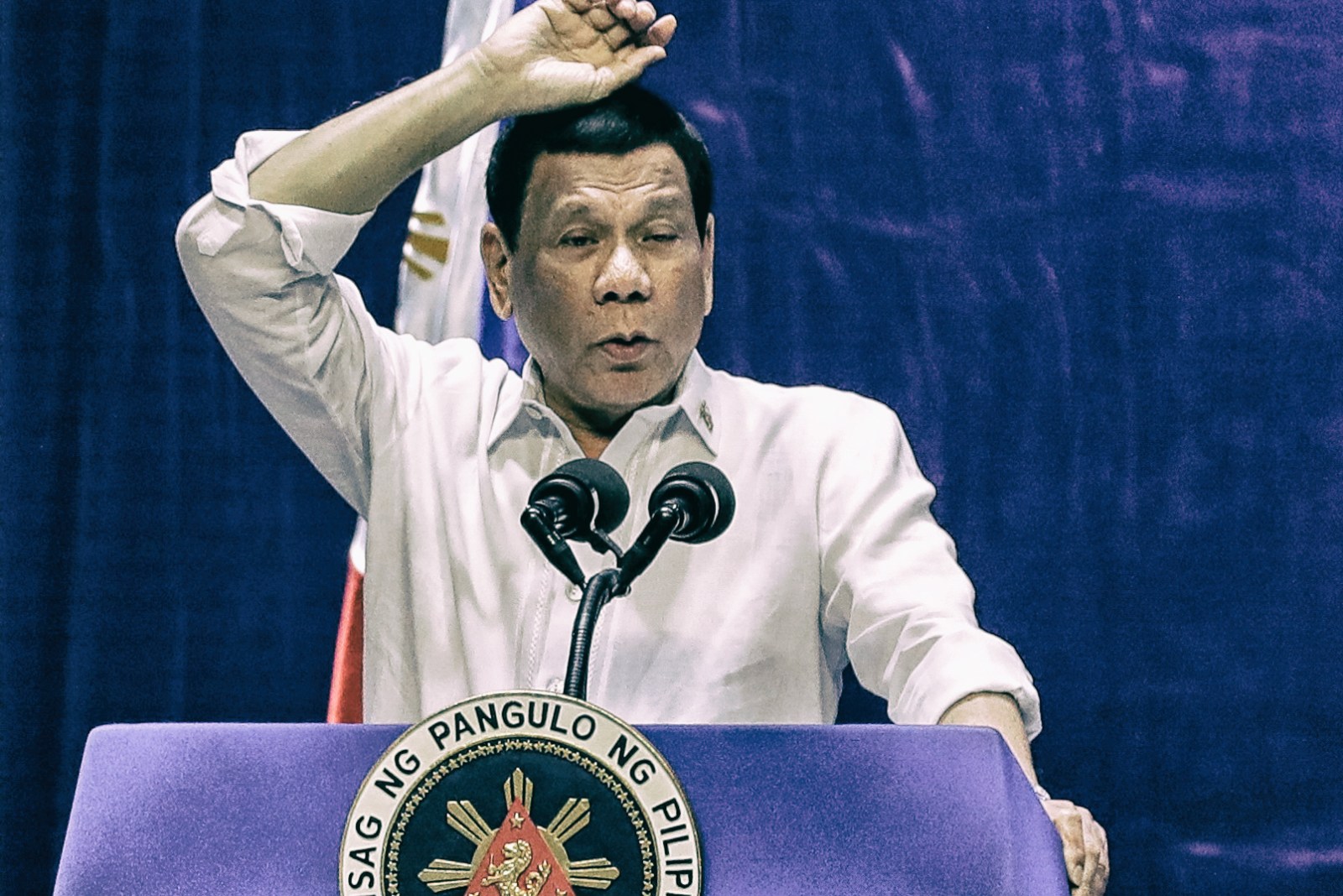 Philippine President Rodrigo Duterte gestures as he speaks at the Barangay Summit on Peace and Order with village officials in Manila, Philippines, 08 January 2019. EPA-EFE/MARK R. CRISTINO

The Philippines and South Africa may not be joined together in a high-profile political and economic partnership, like BRICS. Still, we are two sibling postcolonial democracies birthed, in part or whole by popular protest, within eight years of each other.

It’s Monday morning, and we’re looking out from our 34th floor Makati flat towards Manila Bay. After Sunday’s relative clarity, the grey smog has thickened again to erase the mountains and sea, the residential streets, and even the nearby skyscrapers.

It looks worse even than Jo’burg in brown-hazy winter—although, to be fair, Johannesburg ranks worse on the World Health Organisation numbers.

The price of progress? Greater Manila now houses 23-million people. And while lagging behind its neighbours, the Philippines is still a booming Asian economy running on everything from customer call centres to semiconductor and coconut oil exports.

This morning, a flood of vehicles clogs up Epifanio de Los Santos Avenue, known as EDSA. Later, on our trip, we’ll catch a minibus taxi from Batangas city to neighbouring Taal, and the first 4km will take us almost 45 minutes. Thanks to poor urban planning, the Philippines has some of the worst traffic jams in the world.

But the vibrancy of the developing world is so visible, too. The streets are full of hawkers selling food, clothes, toys, and Christmas lights. The historic nearby neighbourhood of Magellanes is a warren of bakeries and spaza shops, shiatsu parlours and pharmacists, hair salons and scooter repair joints.

The Philippines and South Africa may not be joined together in a high-profile political and economic partnership, like BRICS. Still, we are two sibling postcolonial democracies birthed, in part or whole by popular protest, within eight years of each other.

In 1986, the same EDSA that’s snarled up today with traffic was packed with two-million protesters demanding the resignation of dictator Ferdinand Marcos. Corazon Aquino and her assassinated husband smile out from the back of today’s 500-peso bill.

Popular media paints today’s Philippines as, variously, a de facto fascist dictatorship, because of current President Rodrigo Duterte’s war on the drug gangs; a hellish nightmare of human rights violations; and as a prime example of the global populist backlash against liberal, democratic globalization.

Certainly, the violations are nothing to be scoffed at: around 7,000 extrajudicial assassinations of drug suspects; a critical senator imprisoned on highly dubious drug charges; and a preliminary investigation into crimes against humanity by the International Criminal Court in the Hague.

Then, too, as a traveller on holiday one’s impressions is necessarily slanted and superficial.

Yet for all that, I’d be lying if I didn’t say I had to pinch myself, here, to square this relaxed, cheerful, palpably free-spirited place with the reports about fierce populist anger and intense government repression.

There are no Casspirs on the street, here, as during my apartheid youth. You see far fewer cops than in South Africa, Spain, or the United States. On the island of Mindoro the vehicles all but ignore the only roadblock we see during our travels — the driver of our motorised tricycle, for example, just waves at the lone, lethargic-looking uniformed constable.

Although the administration has arguably tried to intimidate critical journalists, an energetic free press, both print and online, still holds political leaders to account. A perfunctory glance at the Manila Times or Rappler will reveal several editorials sharply critical of the government.

Gender dynamics, in particular, seem comparatively benign. We observe no cat-calling of women on the street. Violent street crime is low.

In Manila and Batangas, we see gay men and lesbians showing public affection, and during a stopover on Tablas Island, we join all 300 or so inhabitants of a tiny fishing village at the annual “Miss Gay Santa” beauty pageant for the island — a cross between a pride parade and a platteland talent show, high school rap acts mixing with impassioned drag queens’ speeches about human rights.

In the atmospherically crumbling, tropical-lush colonial town of Taal, we get adopted for Christmas by the family of Fritzie, our hotel proprietor: roast suckling pig, rum, and coconut pudding under the flowering frangipanis. Here, election season is in full swing, and Fritzie’s brother is running for the position of deputy mayor under the banner of Duterte’s PDP-Laban party.

“I know what foreigners think,” Fritzie tells me later. “But we Filipinos love Duterte. Until the last year or so, we had a big problem here in Taal, with drug-related crime. Now, the community is much more peaceful and healthy.”

Trump, to whom Duterte is often compared, has seen approval ratings of around 40% for much of his presidency. By contrast, more than three-quarters of Filipinos tell pollsters they approve of Duterte’s job performance, and even the Duterte opponents I meet express grudging admiration for his administrative effectiveness.

When Filipinos ask me about South African politics, they want to talk less about human rights than about land reform, an issue this democracy has been grappling with since the 1980s.

Then, too, the Duterte seen and talked about here seems a much more complex and contradictory figure than the sexist authoritarian strongman of the Western media.

On the one hand, he makes controversial rape jokes. On the other, he has publicly disclosed that he was sexually abused by a Catholic priest; has implemented pro-woman policies ranging from reproductive rights to special police desks for domestic violence; and has voiced support for same-sex marriage.

On the economy, Duterte granted three Cabinet positions to the Communist Party and shares plans to redistribute wealth, while at the same time pursuing trade deals with China that critics say would damage the country’s sovereignty.

Finally, there is the question of the 30-year Muslim secessionist insurgency in his native Mindanao province.

Arguably, religion is for the Philippines what race is for South Africa: the fundamental social division that threatens the fabric of democratic unity itself.

Here Duterte, the first Philippines president from Mindanao, has been criticized for proclaiming martial law. Yet he also first made his name as Davao City mayor by insisting, for the sake of ethnic and cultural inclusion, on appointing deputy mayors from the “Moro,” or Muslim, minority groups.

While several of Duterte’s predecessors engaged in important peacemaking initiatives, has been instrumental in advocating for changes to the Bangsamoro autonomous region.

The founding chairman of the Moro National Liberation Front took the unusual step of endorsing Duterte for president, calling him “the last hope for peace”.

No: with all its heartbreaking beauty and occasional violence, its vulnerability to disaster, and its boer-maak-‘n-plan energy and conviviality, this country reminds me far less of Trump-backlash America than it does of my native South Africa — two countries less interested in a glorified past than an uncertain, but hopeful future. DM