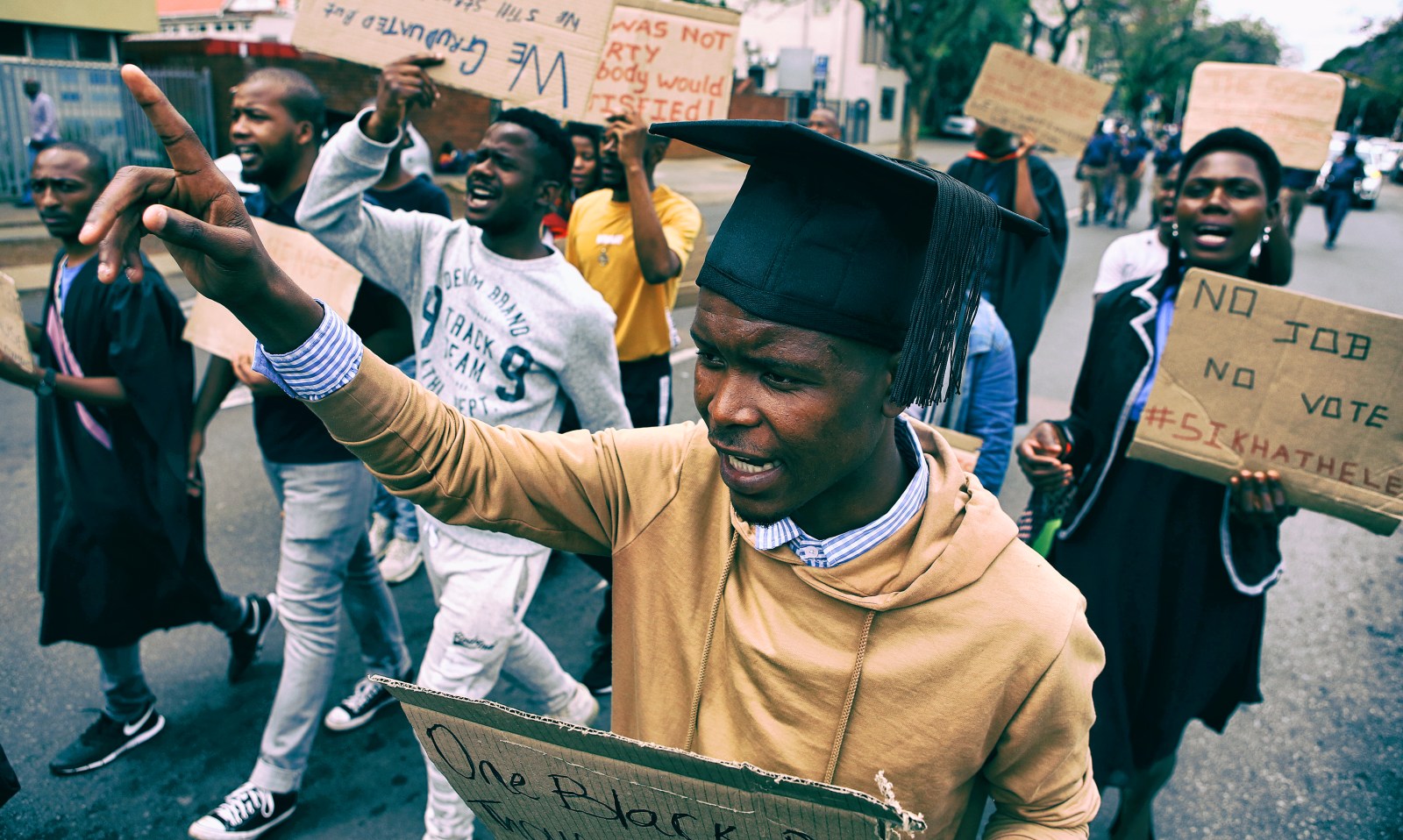 Unemployed graduates from KwaZulu-Natal and Pretoria march to the Union Buildings on November 06, 2018 in Pretoria, South Africa. The graduates, some wearing their graduation regalia possess qualifications ranging from economics degrees, fine arts diplomas and teaching diplomas handed over a memorandum to officials demanding government to come up with solutions to tackle the rising unemployment rate. (Photo by Gallo Images / Phill Magakoe)

Women and young people make up the majority of the South African population. The challenges they face cannot be over-emphasised.

South Africa is young and female. According to Statistics South Africa’s 23 July 2018 mid-year population estimate report, there were 57.7 million people in South Africa. More than half the population (51%) is female. The report also stated that women live, on average, six years longer than men, with a life expectancy of 67.3 years compared with 61.1 years for males. The population figure for young people between the ages of 15 to 34 was 20.6 million.

Post-apartheid South Africa is facing challenges of inequality, unemployment and poverty, of which most of the victims are women and young people. At the end of 2018, the national unemployment rate was at about 27.2%.

Despite the differences in statistics for youth unemployment, the fact remains that it has a negative impact on economic growth. There are also other risks associated with youth unemployment which include the risk of loss of talent and skills as young graduates are unable to find jobs to put their knowledge and capabilities towards contributing to economic growth; an increase in social spending; low-income tax collection by the government and so on. Youth unemployment can destabilise the safety and security of a country.

Women and girls also face social and economic marginalisation in South Africa. This is caused by an entrenched system of patriarchal domination, perpetuated by some cultural and religious beliefs. Women and girls suffer multiple forms of violence perpetrated by men. Stats SA reported that femicide is on the rise in South Africa. According to Stats SA figures the murder rate for women increased by 117% between 2015/16 and 2016/17 and the number of sexual offences against women jumped from 31,665 in 2015/16 to 70,813 in 2016/17, an increase of 53%.

Notwithstanding the achievements of the post-apartheid South African government, the statistics show that more still needs to be done to address the legacies of apartheid, colonialism and patriarchy. The country cannot move forward while the majority — which is comprised of women and young people — is marginalised.

The right to vote is one of the fundamental rights in South Africa. Elections are platforms for citizens to exercise their right to choose those who will represent them in the National Assembly/provincial legislatures/municipal councils. Around May 2019, voters will descend on more than 22,000 Independent Electoral Commission voting stations throughout the country to participate in the national and provincial elections.

While it is the sole prerogative of political parties to decide on what to put in their manifestos, I think it is vital for political parties to strongly consider having gender- and youth-biased manifestos with practical and implementable plans to eradicate challenges faced by the women and youth of our country. The challenges facing women and young people in South Africa cannot be overemphasised. DM

Sediko Rakolote is a commissioner at the Commission for Gender Equality, writing in a personal capacity.