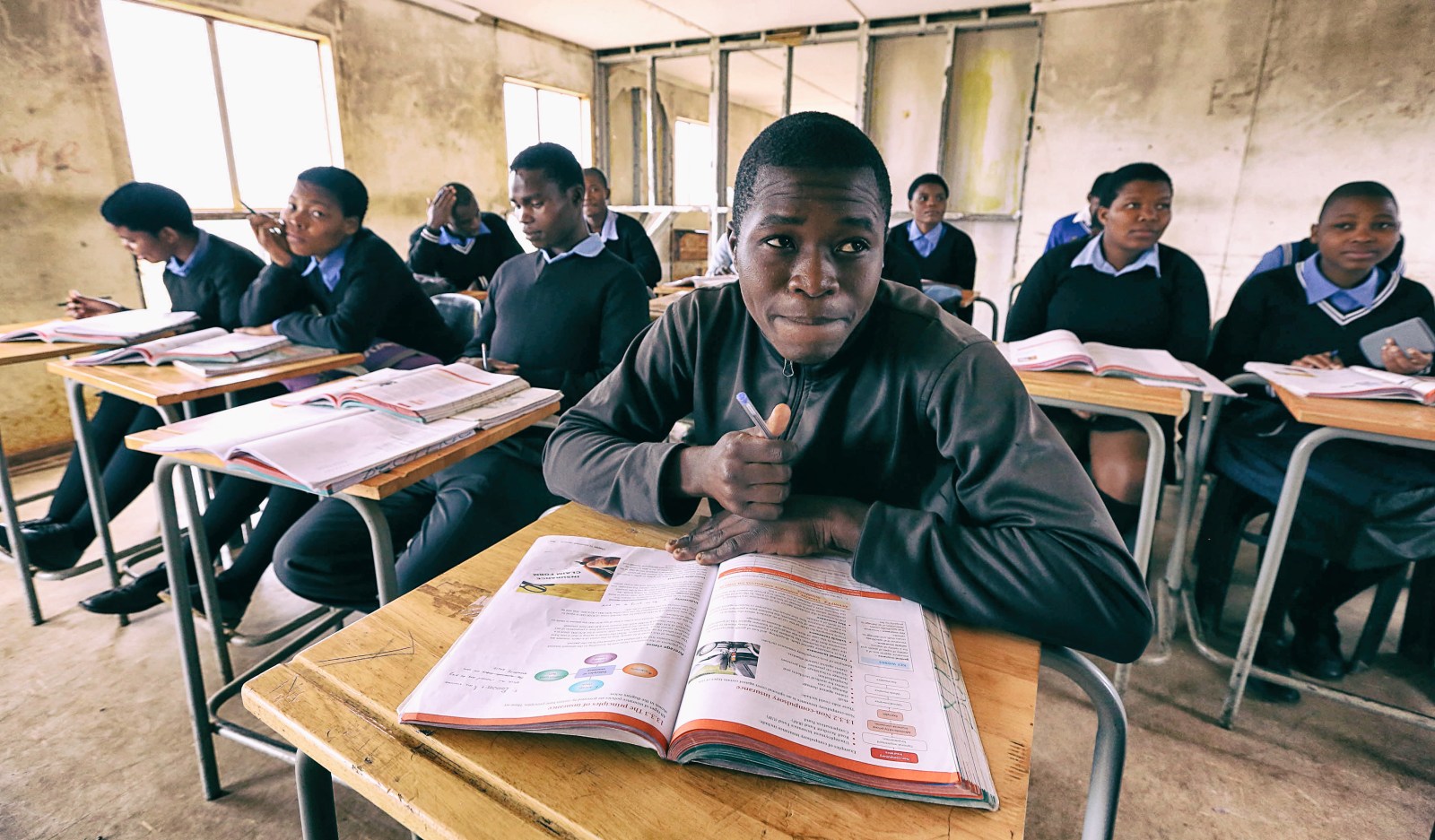 Matric pupils of Lubelo Secondary School on June 29, 2017 in Kwazulu-Natal, South Africa. Pupils and teachers are furious because classrooms and schools that are promised to them stay unfinished and cannot be occupied and pupils and teachers are forced to stay in schools that are a health risk. (Photo by Gallo Images / Sunday Times / Thuli Dlamini)

We have all survived the matric results announcements along with the New Year festivities. There remain several seemingly intractable myths relating to our education system. These feature across various media platforms at this time of year.

The eight myths relating to our education system are:

I will discuss each one, with some empirical evidence to ensure that my opinion is more than just my own experience or gut feeling.

Part One deals with myths one to five, while Part Two concerns myths six to eight.

MYTH 1: We are not making progress

How many of you have heard or said: “We spend so much on education, but our population is not getting any more qualified” this time around?

FACT: Our household survey data shows that over time, the proportion of our population aged 20-28 with matric has been increasing over time. The greatest improvements have been among youth in the 20-24 age category. 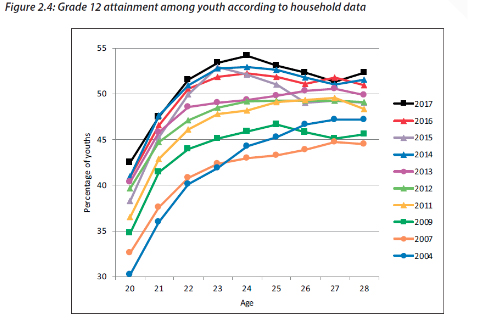 FACT: Census 2011 shows that we have near-universal attainment at Grade 7 level, and improvements are in evidence at Grade 9 and Grade 12 level too. Our higher education participation rate is about 18-20% (this is the total higher education headcount for bachelors enrolment divided by the 20-24-year-old population), for 2011-2016.

Here is why improving the education qualifications level is important: low education levels correlate with high poverty (and high fertility). 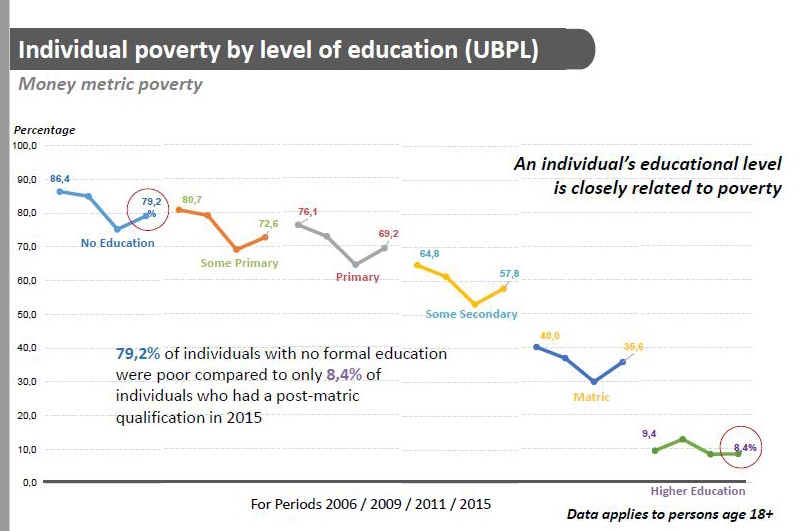 MYTH 2: The department reports only on the quantity and not the quality of matric results

Does any of this sound familiar? “They are just chasing numbers — 2019 is an election year — of course the results would be better. They are just interested in the pass rate…”

FACT: The National Senior certificate can be passed at four levels of difficulty (or “quality of pass”) and the Department of Basic Education reports on all of these levels.

Here is how it works:

In this way, the NSC is differentiated. Learners can leave school with a “matric”, and depending on their results can wait in line to be accepted in certificate, diploma or degree options in higher education programmes.

This information has been collated from the Department of Basic Education’s own report: 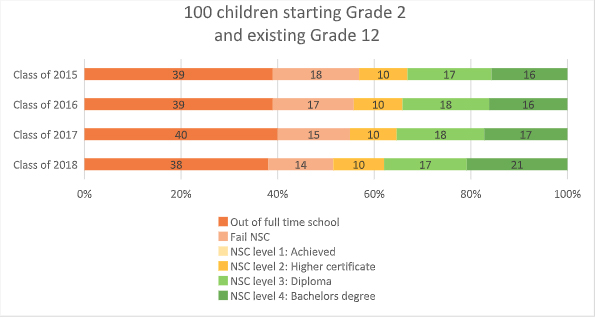 Notice that no learner passes only at the “achieved” level. They either fail or start passing at the “higher certificate” level, so we get no one performing at the lowest level. I see a stable system with slight improvements in the quality of passes over time.

Notice also the increase in the proportion of learners gaining bachelor degree passes in 2018. This is likely to be a result increasing the number of matric subjects that are “designated” subjects for the NSC bachelors pass. This slight adjustment should be sustained over time as the NSC becomes more specialised for particular employment pathways and NSC attainment articulates more closely with vocational and technical options.

The Department of Basic Education has over time offered more work-related and specialised subjects to help to bridge the employment and academic divide. For example, “Hospitality Studies” (for a pathway into learnerships for tourism and hospitality) was offered as a matric subject. However, it did not count towards a bachelor degree pass. As a result, we have seen the numbers of learners taking this subject (directly relevant to the tourism industry) declining. Hospitality Studies are now recognised as a designated NSC subject, and getting above 50% contributes towards a bachelors degree pass.

This is in line with the Department of Basic Education’s efforts for matric to be more differentiated and for the subjects offered via schools and technical and vocational colleges to cohere better. For example, specialised subjects have been introduced through schools, such as sign language, technical sciences, civil technology (construction/civil services/woodworking), electrical technology (digital systems/electronic/ power systems) and mechanical technology (automotive/fitting and machining/welding and metalwork) into the NSC. Universities may need to adjust some of their admissions criteria to prioritise particular subjects and results for their degree intake.

MYTH 3: Matric is getting easier and easier.

Matric standards are dropping. How can the pass rate just keep improving? “They only get this because matric is a joke… In my day matric was serious. Nowadays it is monkey see, monkey do…” Yaddah yaddah blah blah.

I challenge any of you who have passed matric prior to 1994 to pick up and try a matric examination paper. Try the mathematics, or physics, history or English home or first additional language. Take your pick. If you never took mathematics at school, then try the mathematics literacy paper. If you took “home language English”, give a first additional language paper a whirl. Imagine writing all your examinations in a language other than English. Give it a go. They are available here.

Of course, matric has changed since 1994. Our country became a democracy. Our whole population became South African citizens. Our 19 different education departments were standardised and now follow a national curriculum. This was a necessary change in our move towards equal access to learning. Mathematics was no longer optional (you have to choose either mathematics or mathematics literacy). You take at least seven subjects: Home language, first additional language and maths/maths lit, and life orientation.

But, FACT: Since about 2008 the matric curriculum has been relatively stable. So what is taught and assessed has not changed fundamentally in the last decade.

Research evidence relating to difficulty levels of examination papers in mathematics and physical science does not support the claim that the exams are getting easier. I have mentioned previously (Matric maths: What’s our story?), in 2016 Martin Gustafsson analysed NSC mathematics examinations, benchmarking the difficulty of NSC matriculation examinations from 2008 to 2015. This research found that “in mathematics, the figures suggest that there has been a general shift towards more demanding examinations, meaning it has become increasingly difficult for learners to obtain specific marks”.

Similar benchmarking has been done examining the matric results of 32 “stable schools” over the period 2008-2018. This research is documented in the 2018 Department of Basic Education NSC Examination report and shows the following:

There have been slight increases in the number of learners attaining at the 50% level in mathematics and science. Adjusted scores to a benchmark difficulty show that the 2018 mathematics paper was particularly difficult, while the physical science paper was a little easier. Importantly, the increases in the attainment outputs are coming from a wider range of schools.

If the exam papers were just getting easier and there were no changes in the quality of the whole schooling system, one would only expect to see top-performing schools getting better and better results. However, we see shifts in which schools our top-attaining students come from (at bachelors degree pass level, at the 50% level for mathematics and physical science, and at the distinction levels). This is a very encouraging sign of system-wide improvement with greater (although nowhere near sufficient) equality between schools.

MYTH 4: Youth who fail matric is a lost cause

It’s okay. If you or a loved one failed matric, the end is not nigh!

FACT: There are multiple ways in which matric may be re-written. Some matric candidates participate:

All of these aspects are described and reported on by the Department of Basic Education. There are many publicly funded options available to repeat matric.

We would like to avoid having many over-age learners sitting in school uniforms taking up the full-time places of those who are in the targeted age cohort. The progressed learner policy is one of several attempts to respond to international education trends, and to smooth out the enrolment graph shown above.

The progression policy states that a learner may only spend four years in any three-year phase. This means that a learner may repeat only one grade in a phase, and is then “progressed” to the next phase. They may not write all seven subjects in one sitting. However, they can write some exams in November and the remainder in June. In effect, they can take 18 months for their matric year. The Department of Basic Education now reports on the pass rates of these progressed learners (separately and combined with other learners). In the past few years, we have seen that progressed learners obtain a 60% pass rate.

MYTH 5: Every citizen should obtain matric

Much analysis seems to assume a target of 100% cohort pass rate.

FACT: About half of our citizens obtain a Grade 12 qualification, with about one in five getting a bachelors level pass. A target of 100% cohort pass rate is unrealistic.

Our 2016 data from the community survey (StatsSA) offers us the following education profile by age.

The little yellow blocks put into perspective the amounts of funding which have been diverted out of TVET (vocational and technical training) into university education. Much of our public fiscus has been given to the very few who enter university. Far more investment is needed for those youth not in education, training or employment in the 15-24 age bracket and for our vulnerable children in the 0-5 age bracket.

So five myths are debunked. I hope to receive some empirically based rebuttals. DM

In PART 2 I discuss three more myths and make some suggestions for further improving our education data and analysis.