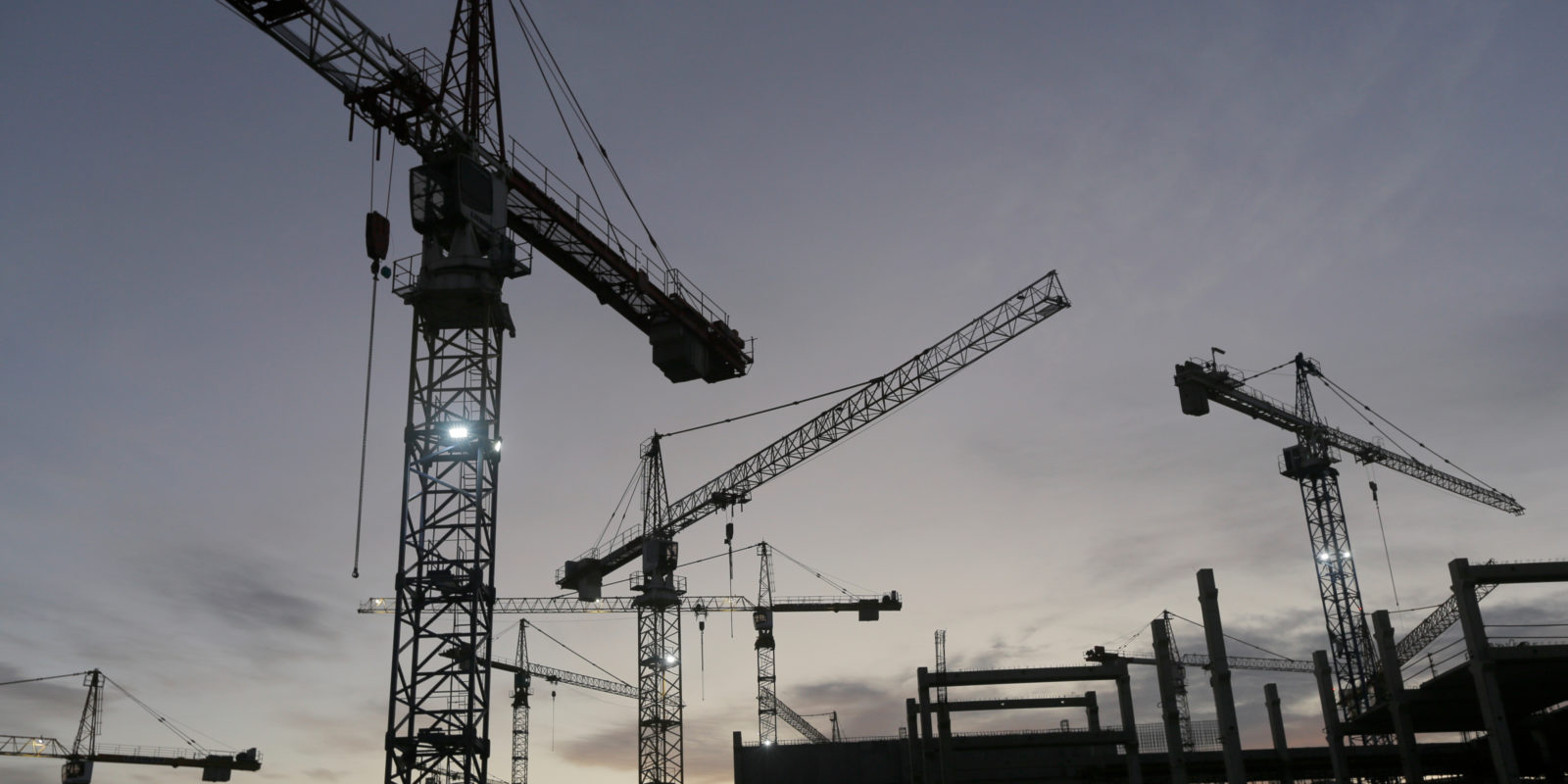 South Africa faces another year with no signs that it is able to solve its massive social and economic problems. We have been promised a new dawn but all we see are task teams, commissions of inquiry and more manifestos. Why do South Africa’s problems seem intractable to the ANC government nearly a quarter of a century into running the country?

A point that we South Africans always overlook is that South Africa, like the rest of Africa, is a neocolonial society. We like to think of ourselves, if not as a developed country, at least as very close to being one. To us, Africa is, well, a place north of the Limpopo inhabited by hopelessly poor people overwhelmed by malaria and Ebola and ruled by hugely incompetent and cruel regimes.

The reality is all of Africa including South Africa are neocolonial societies. A neocolonial society is a country where most of its exports are primary products. This is the case for virtually all African countries with the sole exception of Mauritius.

In the case of South Africa, 65% of our exports are minerals and agricultural products. More important, South Africa’s leading mineral exports – platinum, coal, gold, iron ore and diamonds – are slowly heading for their deathbeds due to asset depletion and/or being substituted. This means South Africa as a society is also heading for trouble in the not too distant future.

Most Asian countries on the other hand such as Malaysia, Taiwan and South Korea broke out of the primary products export trap many years ago, a trap that was set for them by the colonialists over decades. Asian countries today are the epicentre of the global value chain system that makes and exports manufactured goods and business services to the whole world. While Africa’s trade that is dominated by an export of primary products goes out of Africa, Asia’s trade which is dominated by manufactured goods and is increasing among Asian countries themselves.

Today most of the Malaysian exports are electrical, electronic and other engineering products; 36.8% of Malaysian GDP comes from manufacturing industries and only 3.4% of Malaysians are unemployed. Most of South Africa’s exports as mentioned above are still primary products; only 13% of our GDP is generated by manufacturing industries, and 38% of South Africans are unemployed.

Understanding the nature of neocolonialism

South Africa ceased being a British colony more than a 100 years ago in 1910 and yet continues along the economic path set for it by the British in the closing decades of the 19th century and during the first decade of the 20th century after their defeat of the Boer republics.

Neocolonialism’s socio-economic foundation is the exploitation of Africa’s mineral and agricultural resources for export in as raw a state as possible to developed countries. It is not material who actually employs the labour of the Africans who produce the raw materials. At the early stages of colonialism employers of African labour were foreign companies from the colonial power.

This, however, did not change the fundamental character of the producing country as a neocolonial society. In the case of South Africa over the years mining companies, banks, commercial farms, became owned by South African citizens black and white though of course foreigners often participated in their shareholding via the Johannesburg Securities Exchange. This does not change South Africa’s neo-colonial status which it acquired by virtue of its being a supplier of raw materials to the world economy.

In South Africa, political parties of the nationalistic petty bourgeoisie that have dominated the country’s politics during the last 100 years were the National Party (1914) and the African National Congress (1912). These parties define themselves by their relationship with the imperial power whose economic interests of extracting raw materials, in the final analysis, they advanced as well by the interests of the particular petty-bourgeois group they represent.

What is most commonly misunderstood about South African politics, especially by black compatriots, is that petty-bourgeois parties advance the interests of their core constituency – the pretty bourgeoisie. Many South Africans believe the National Party advanced the interests of whites, this could not be further from the truth. The NP advanced the interests of the Afrikaans petty bourgeoisie, that is, Afrikaans speaking farmers, traders, civil servants, and intelligentsia. Many non-Afrikaans speaking whites knew this which was why many of them did not vote for the NP. Gerrymandering of constituency borders to favour rural constituencies took care of that particular problem.

The same can be said for the African National Congress, which claims to be advancing the interests of all blacks while in reality it primarily advances the interests of the African petty bourgeoisie. These are formers leaders of anti-apartheid organisations, civil servants, intelligentsia, many of whom have become billionaires and multi-millionaires while the black masses languish under ever-increasing poverty and unemployment.

A key characteristic of the petty bourgeoisie is that unlike the capitalist class in the West and in many Asian countries today it lacks cohesion and common national purpose. It, therefore, has no consensus about its country’s national interests. Its main agenda is to stay in power, extract taxes from the neocolonial economy, and to consume at whatever the cost to the economy and to the country.

This agenda, overlaid with corruption, however, creates fragmentation within the ruling petty bourgeoisie. It is this that explains a sense of perennial political instability in Africa. This is especially pronounced in South Africa where two successive ANC presidents have already failed to complete their terms of office.

Production of raw materials is by definition a semi-skilled and unskilled cheap labour activity. neocolonial societies, therefore, suffer from the stagnation built-in into cheap labour, low competition, low productivity economies as well as other attributes that go with their relative stagnation.

These are physical repression of labour – the Marikana massacre being but one incident of many such massacres of strikers during the last 100 years – among others. Other attributes are high inequality, religious and political fanaticism, as well as high levels of poverty which in turn lead to extensive outward migration even among the better educated as we see in the desperate efforts by Africans to cross the Mediterranean Sea.

A great deal is made in the popular media about high economic growth indicators in several African countries such as Ghana, Ethiopia, Kenya, and so on. Despite all these claims Africa with the exception of Mauritius has not changed its position in the global economy as an exporter of raw materials and increasingly, of labour.

What must South Africa do to overcome neocolonial status?

What is unique about South Africa compared to the rest of Africa is that it has no peasantry. The economic foundations of the peasantry were destroyed by the British in the 19th Century through the migrant labour system in the process of the establishment of the mining industry. The economic model of South Africa’s minerals export driven neocolonial economy created a massive underclass most of it based in rural areas that could not be absorbed into the country’s normal functioning of its economy. This is why the South African economy has rightly been described as an enclave economy.

The second major crime of British imperialism in South Africa, besides the creation of the migrant labour system, was the destruction of the manual and technical skills of the African population. Prior to colonisation Africans were proficient in their environment in metallurgy, tanning, construction, medicine, animal husbandry and many other capabilities. Those skills were undermined and destroyed by the British who replaced domestically produced goods with imports. At the same time through various forms of job reservation Africans were blocked from replacing lost indigenous skills with Western skills.

So if South Africa is to prosper in the future it needs not only to get rid of the migrant labour system but to overhaul and rebuild its education system in order to re-skill the entire adult population.

South Africa’s immediate challenge, however, is how to make this enormous unskilled, unproductive underclass productive instead of being dependent on the country’s relatively small working population through social grants, remittances and the like. This can only be done by intensifying the productive capitalist nature of the South African economy not by perpetuating its primary materials export orientation. In other words, South Africa has to find a new industrialisation economic model.

A starting point must be to convert the South African economy from a consumption, redistribution driven minerals exporting economy which is what it is today. This will require in the first instance the dismantling of the unproductive class of middlemen who are parasitic on existing businesses through the income and wealth redistribution system of black economic empowerment and affirmative action.

Second, South Africa needs to drastically reduce the cost of its public sector. This will also require the shrinking of the highly paid upper echelons of state and parastatal elites. It is therefore critical to disincentivise black professionals from flocking into public sector employment by cutting back high public sector salaries of its elite. They must be encouraged to look at entrepreneurship instead and generally at private sector employment. 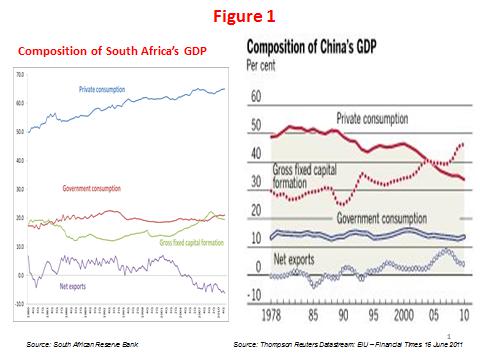 Finally, the South African economy must be reorganised to shrink consumption as a proportion of gross domestic product and instead increase investment to over 30% as a percentage of GDP as recommended but never implemented by the National Development Plan. The diagram above compares the structure of South Africa’s gross domestic product to China’s. This explains why China developed very rapidly during the last four decades; it also tells us the way we need to go to escape the status of a mineral-driven neocolonial economy. DM

Moeletsi Mbeki is deputy chairperson of the South African Institute of International Affairs an independent think tank based at Wits University.